The development of small-sized nuclear power plants has begun.

November 24 2015
34
In the foreseeable future, the Russian armed forces should expand the fleet of auxiliary equipment. To support the troops and, if necessary, civilian objects, it is proposed to create new mobile power plants suitable for quick transfer to the required areas. A project for the development of such equipment has started, its first results should appear by the end of this decade.


According to the TASS news agency, several research and design organizations are involved in the development of promising mobile power plants, and the Engineering Project of Innovative Projects is responsible for the overall coordination of the project. It was her leadership who recently talked about ongoing work in a promising direction. According to the company's general director, Yuri Konyushko, the work is being carried out in accordance with the order of the Minister of Defense. The military department wants to get new small-scale nuclear power plants. Apparently, such equipment is planned to be used for power supply of remote garrisons, troops at test sites, etc.

To date, domestic industry experts have already begun preliminary research work on a promising project. The first conclusions should be made as soon as possible. It is reported that the preliminary data on the new project will be transferred to the Ministry of Defense before the end of this year. In the future, it is planned to begin full-fledged work with the creation of a technical project, according to which new-type power plants will be built. 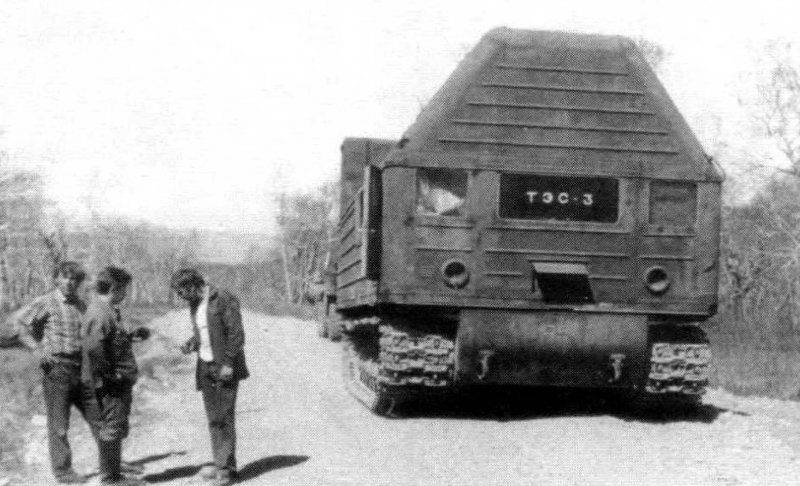 One of the blocks of the power station TES-3

The next stage of the project, according to Yu. Konyushko, will last for about a year or two. The next stage of development work, as well as the manufacture of an experimental power plant will be carried out before the end of this decade. According to existing plans, a prototype of a promising small-sized nuclear power plant should be submitted to 2020 year.

It is noted that over the next four to five years, Russian specialists will have to not only develop a new project, but also prepare production facilities for mass production of promising power plants. Such equipment is not being manufactured in our country at the present time, so a number of critical issues will have to be addressed.

Technical requirements for promising small-sized power plants have not yet been announced. The Director General of the Engineering Company for Innovative Projects mentioned only the modular architecture of the stations and the possibility of installing their equipment on various basic chassis designed to provide the required mobility. In addition, the intention to build equipment with different dimensions and power was announced.

A promising power plant, according to current plans, will be able to be installed on various types of wheeled chassis manufactured by the Minsk and Kama automobile plants. In addition, a power plant based on a towed sleigh is being considered. In a similar configuration, it can be operated in the Arctic. It was also mentioned in the context of mobility that promising power plants could be transported by air or helicopter. Using transport aviation they are proposed to be delivered to remote areas of the North.

An important feature of the new project should be the maximum autonomy of power plants. They will have to work for a long time without the active participation of a large number of specialists. To monitor the work, it is planned to create remote monitoring and control systems that will work, including using communication satellites.

The approximate construction volumes of the first power plants of the new type have already been determined. Initially, at least three dozen of such complexes are required, which will be distributed between various objects of the Far North, including those located on the archipelagoes of the northern seas.

Specific characteristics of promising small-sized nuclear power plants for the Arctic and other areas have not yet been announced. Moreover, from the available information it follows that such parameters have not yet been determined. Apparently, at present, specialists are busy with a preliminary study of promising systems and are not yet ready to make a final verdict. At the same time, approximate construction volumes are already known. To solve existing problems requires at least three dozen power plants.

Nevertheless, the first conclusions about the principal realizability of new projects will be made in the very near future. According to Yu. Konyushko, preliminary data on current works will be transferred to the customer by the end of the year, after which new development stages can be started. If further work goes without significant problems, the first systems of the new type can be tested by the 2020 year.

Published information about the new project suggests that it is being created as part of the current program for the return of armed forces to the Far North. When restoring old bases and building new ones, power supply acquires particular importance. In the absence of the possibility of obtaining electricity from the "big land" builders and garrisons have to rely on existing diesel power plants, etc. equipment, which, however, is not without flaws. His main problem is the need for a constant supply of fuel.

In order to provide builders or troops with electricity without the need to supply fuel, small-sized nuclear power plants of required capacity can be used, but at the moment there are no such systems in our country. The new project is designed to fill this gap and provide power to remote sites.

It must be recalled that the project currently being developed for a mobile nuclear power plant is not something new. In the late fifties, work in this area began in our country. The first result was a mobile power plant of the TES-3 type on a tracked chassis, the trial operation of which began in the 1961 year. In the future, several other projects of similar technology were developed. In addition, the first domestic floating nuclear power plant, made in the form of a dumb ship, is currently being built.

Upon successful completion, the existing projects will expand the fleet of special equipment intended for power supply in remote areas. In this case, floating nuclear power plants will be able to provide electricity to coastal areas, and mobile land intended for use at the facilities of the Far North, including those located on islands. In accordance with the current plans of the industry and the military, the operation of such equipment can start as early as the beginning of the next decade.