November 24 2015
14
On November 20, the APEC forum, the annual meeting of the presidents and heads of government of twenty-one states in the Asia-Pacific region, ended in Manila. The Russian Federation at the summit was represented not by Vladimir Putin, but by Dmitry Medvedev. The West, represented by the BBC, was nervous: “Why is there no Putin at the APEC summit?” 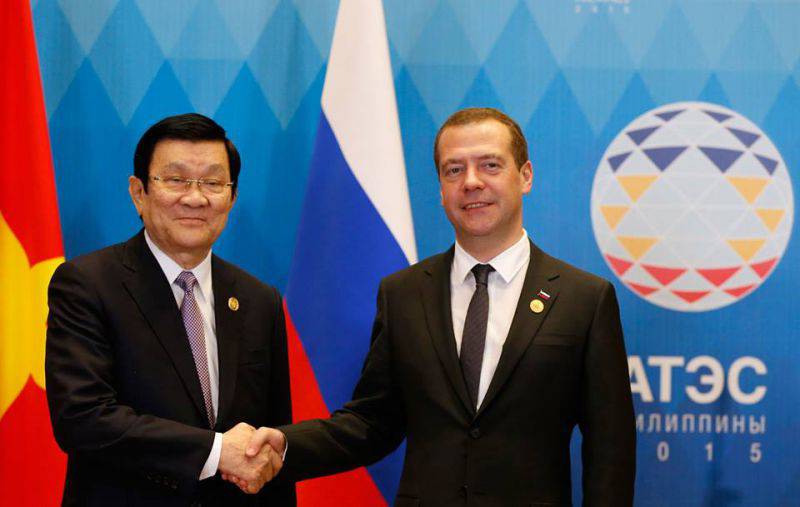 The APEC Summit in Manila, Philippine, was guarded round the clock by a whole line of policemen. Beggars and homeless Filipinos, who were always full in the city, were driven out of it. The media reported about twenty thousand of those expelled. It was delivered to the demonstrators who opposed globalization and liberalization. The protesters carrying the “Let's say no to the American liberalization!” And “Obama we are not happy!” Posters were dispersed by water cannons.

"Dozens of wounded, many now in the hospital," - commented on the dispersal of the rally "Vesti".

“On the reservation, in which the summit took place, this is all - understandable - not visible and not audible. Obama is chewing the cud again, the new Canadian prime minister, for whom such summits are still new, is chewing too, but he wraps it in paper before the beginning. ”

This time, the APEC agenda hardly corresponded to traditions this time: the situation in the world had changed, and it would be wrong to speak on economic topics alone. "We emphasize the urgent need to increase international cooperation in the fight against terrorism," - cite "Vesti" the final declaration of the forum.

APEC member states spoke about the terrorist attacks in Paris, Beirut and the crash of a Russian airliner in Egypt. The forum participants called for the strengthening of international cooperation in the fight against terrorism.

“It is necessary to create a broad antiterrorist coalition as soon as possible,” Dmitry Medvedev quotes "TVNZ". - It is necessary to negotiate, and not argue, whether it is worth cooperating with the Russians, who are “behaving incorrectly”. These arguments seem to me immature and undignified. ”

In addition, the newspaper notes, D. Medvedev spoke about the discussion with the leaders of the APEC countries about the safety of Russian tourists: “They (the APEC countries) want to take Russian tourists and insist that they will take active measures to ensure security. Moreover, APEC also has enough problems, it is necessary to restore order. ” However, answering a journalist’s question about whether the Russian Federation can suspend flights from other countries besides Egypt, the prime minister said that this cannot be ruled out.

The media also reported that in Manila, in the sculpture garden, the Bear is now installed: as a sign of cooperation and partnership with the APEC, it was presented by Prime Minister Medvedev.

Not finding Putin on the forum, the British TV and Radio Company miserably "BBC". Journalist Artem Krechetnikov shared analysts' assumptions on this topic.

“Initially, two versions were put forward: a) Putin decided not to attend two events (the G20 summit in Ankara 15-16 in November and the APEC summit) for one week; b) because of bad relations with Barack Obama, Medvedev sent in his place to talk with the head of the White House.

The second version was refuted first by the presidential press secretary, Dmitry Peskov, and then by the course of events. At the summit in Turkey, Putin had no problems talking to both Obama and Cameron. But Medvedev in Manila will meet with the leaders of the states of Southeast Asia and Latin America. Each according to rank.

Andrei Suzdaltsev, deputy dean of the faculty of world politics at the Moscow Higher School of Economics, told Bi-bi-si that Putin’s employment hypothesis should not be rejected: “Of the two events, the G-20 summit is more important. APEC is a regional forum. In a situation where Russia is activating a campaign in the Middle East, it is often undesirable for Putin to leave Moscow for a long time, and the Philippines is much further than Turkey. President Hollande’s visit to Moscow is expected in the coming days, and we need to prepare for negotiations. ”

In short, the search for Putin at the summit and the "version" of why he will not come, and also why he needs to come, is nothing more than material for reasoning of various kinds of analysts and observers. It is necessary to write about something in the end. So they gave out the material under the “sensational” heading: “Why is there no Putin at the APEC summit?”

Russian observers give, in our opinion, a much more balanced assessment of the event and its significance.

For example, a political browser MIA "Russia Today" Dmitry Kosyrev writes that the APEC Leaders Week was “doomed to go almost unnoticed against the background of the war in the Middle East.”

The mechanism of the Asia-Pacific economic cooperation is not designed for informational sensations: the latter can appear to the world except on the margins of the forum where the highest leaders of the APEC states meet. And the leaders say there, "most often it is about business, with no relation to APEC."

“The events in Manila were nonetheless interesting, they showed that it was 2015-th year that became a turning point, critical for the entire Pacific integration project. Firstly, because the rivalry between the United States and China has intensified. Secondly, this happened because it was the last year that turned out to be economically problematic for the APR even beyond this rivalry. As a result, the question arises: will not the APEC mechanism itself become unnecessary, as it has actually happened to the G8, which went down to the G7 with the departure of Russia? ”

Journal "Expert" believes that "the organization's forum, within the framework of which it was supposed to take integration economic decisions important for the Asia-Pacific region, is becoming a platform for informal communication between the leaders of its member countries."

And this is hard to argue.

If the original goal of creating APEC was to advance the region towards maximum liberalization of trade and investment, then in the future many of the APEC countries departed from liberal values ​​and focused on protecting their economies. In addition, China in recent years has become the world's largest economy.

Moreover, the magazine reminds, China “initiated the own project of a tighter economic interaction between the APR countries and other developing economies, putting forward the concept of the New Silk Road and creating the Asian Development Bank.”

In turn, the United States this year formed (as an alternative to China’s plans) the Trans-Pacific Partnership, which united almost all the major economies of the region, except, of course, China and Russia.

“It is therefore quite natural that no specific decisions were made at the APEC summit, and in the final communiqué, the participants expressed concern that the growth of the global economy remains unstable, and poverty and inequality are a brake on economic growth. Speaking out for all the good and against all the bad things in the regional economy, the participants in the meeting actually signed in the absence of real economic agreements and even plans to conclude them. ”

As a result, we note in conclusion that the APEC forum has really turned into a platform for discussing the topical political situation. Probably, in the future, as in the present, journalists will become more interested in the meetings of the leaders of the countries “on the margins” of the summit, rather than the summit itself. That is why Western journalists have "lost" Putin now.

Observed and commented on Oleg Chuvakin
- especially for topwar.ru
Ctrl Enter
Noticed oshЫbku Highlight text and press. Ctrl + Enter
We are
The head of the DPR visited Gorlovka, the cadets took the oath, and in the "Olympic" hosted the forum "Donetsk Republic"People without a home. The problem of homelessness is widespread
14 comments
Information
Dear reader, to leave comments on the publication, you must to register.