November 23 2015
61
Can the Bandera-fascist Kiev go on the offensive, and even in the winter? Many authoritative observers believe that this will happen in the near future, and there will be a general attack by the junta, so to speak, the last blitzkrieg in order to defeat the Novorossiysk republics. And the resumption of shelling in Donetsk is a confirmation of this. 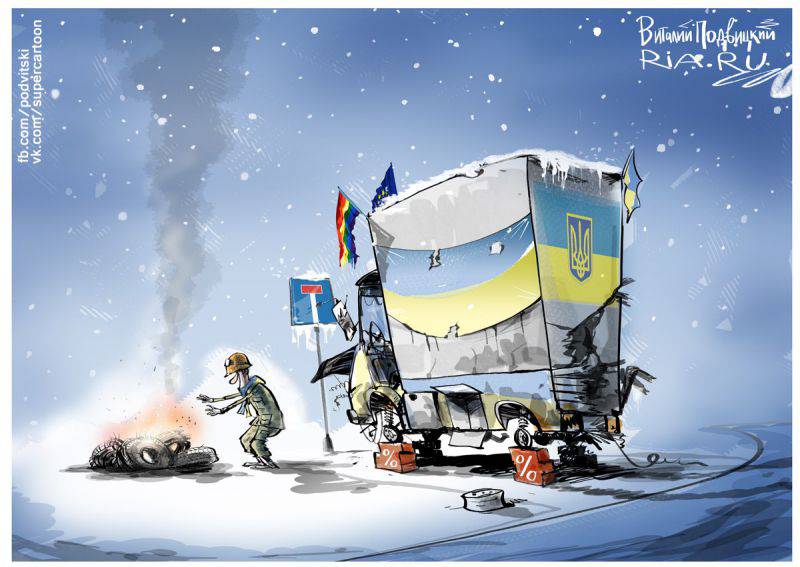 Indeed, for this the junta has a lot of internal causes, and the war will write them off. Nazi ideology requires constant victories, Bandera peremog to maintain hysteria in the society, because there are no other achievements and it is not foreseen. When the whole country is intimidated and looking for internal enemies, and in the heads of some embroidered shirts, we need victories on the external front. And although the winter offensive is not a joke and implies heavy losses to the attackers, the junta is ready for it too. For almost a whole year, she had been preparing troops with the help of Euro-American humanists ...

By the way, the main humanist in the person of US Vice President Joe Biden is expected to visit 7 December in Kiev. Maybe the junta wants to give him a long-promised gift? Then, as if it's time to attack, just two weeks left. However, the weekly shelling, the concentration of several thousand Nazi-militants near Donetsk, who, they say, are intended to dispose of them in the direction of the main attack, will never be resolved by a burden. And they will not be resolved, this artillery exacerbation will continue, now flaming up, now fading away, no end in sight for now ... The offensive is not visible either.

Washington ordered this offensive back in August, and he, of course, is interested in him even today: put pressure on Russia in the Donbas so that it backfires in Syria. Well, to break, in the meantime, the Minsk agreements, which Biden personally does not like personally, he himself spoke about this more than once.

Then, in August, this offensive was stopped by Chancellor Merkel, summoning Poroshenko to Berlin and telling him something that the shelling of Donbass stopped completely. Today, after the Paris attacks and the increasing terrorist danger in Germany itself, its position is unlikely to change, except in the direction of tightening the junta.

There were other important changes that put an end to the military ambitions of Bandera neo-fascists.

Probably the most important of them is the demonstration of the military power of Russia in Syria, which made an indelible impression on Europe, and on Washington and his son, the Pentagon. There they began to more clearly understand what might happen in the event of an armed conflict between NATO and Russia in the steppes of Ukraine. Even conventional weapons.

At the G20 summit in Turkey, Western countries changed their tone in relation to Russia, even Russophobic analysts are forced to admit. Later, Obama called Russia in Syria a “constructive partner,” which was recently unthinkable. France, as the hardest hit by the pro-German upheavals in the Middle East, speaks of the need to establish allied relations with Russia.

Secondly, Minsk-2 will soon end on its own on December 31, 2015, in just a month. A military operation is no longer needed to disrupt it, and Russia's provocation to war with Europe is canceled against the background of Russian Syrian demonstration firing aviation и fleet. And the beginning of the presidential campaign in America.

In this new situation, to thwart the Minsk Agreements with a military "peremogy", although more effectively, is too dangerous, even to the next great ambush, instead of a small peremoga. Especially in the Armed Forces of Ukraine, they should understand that the winter offensive is not a pound of raisins, here you can freeze your ears and something else. Renewed shelling, most likely, are intended for domestic Bandera consumption, maintaining a degree of hysteria in society.

1 January junta, apparently, solemnly announced that she did everything she could to fulfill the Minsk Agreement, but Russia prevented, and it is not to blame, and out of these agreements. In response, Moscow will banderovtsam default on the payment of public debt. The West will ignore it, of course, but Moscow may impose additional sanctions on the debtor country. So begin the new 2016 year.

If the junta completely loses its head, and still dares ... I remember that in August in the Crimea, Putin said that he “hopes that it will not come to major clashes.” And in fact, really, it did not come to an end, it ended with several counter artillery strikes, and in November-December, all the more it will not come.

There is an opinion that Ukraine’s Bandera stabilizes in its semi-fascist-poluporoshenkovskom condition, because the West will not abandon it, it will still drag it by its ears, it will not let it drown, because the country is under its external control, that is, a colony. For some reason, it is believed that the West is responsible for those whom he tamed as a young naturalist. Poorly they know Europe and America, especially since Russia expresses displeasure ...

In the world court financial crisis, in fact, the remnants of Ukraine are based on the Soviet legacy, and foreign business will not invest in a country with a rotten neo-Nazi ideology, and even being in the neighborhood of unfriendly Russia. Too dangerous. Now Krayina rests on handouts from the IMF and Washington, they are given to keep her afloat. How long can this go on?

Sooner or later, it will be sent to free floating, and the Nazi Bandera revolution will continue its fire. A revolution always burns to the ground if it is not poured with troops or money from outside. While they are flooded with money, and they are going to throw it in, it will start to burn out before any of the Nazi-Führer comes to power. The threat of a coup is already openly spoken in the administration of Poroshenko, its head Lozhkin.

The collapse of the Bandera Krajina in the maelstrom of economic, social and revolutionary vortexes for Washington is also an option, for the gulf will open on the borders of Russia, and completely free. The western edge of the failure will affect Poland, and the whole of Western Europe, well, nothing can be done. This Russia will be to blame for everything: did not succumb to the provocation of Washington, did not flood the "national Bandera revolution" with troops, although he did everything he could ...

Ctrl Enter
Noticed oshЫbku Highlight text and press. Ctrl + Enter
We are
Situational analysis of the death of the MH17 flight (Malaysian Boeing 777), made on the basis of engineering analysis from 15.08.2014Results of the week. “In our cooperative, the board is always agreed”
Military Reviewin Yandex News
Military Reviewin Google News
61 comment
Information
Dear reader, to leave comments on the publication, you must sign in.