November 23 2015
7
The 1930 summer of the year was very hot and dry. During the day, the earth warmed up like the bottom of a skillet set on fire. And on short nights - she breathed softly, giving warmth to the starry sky. 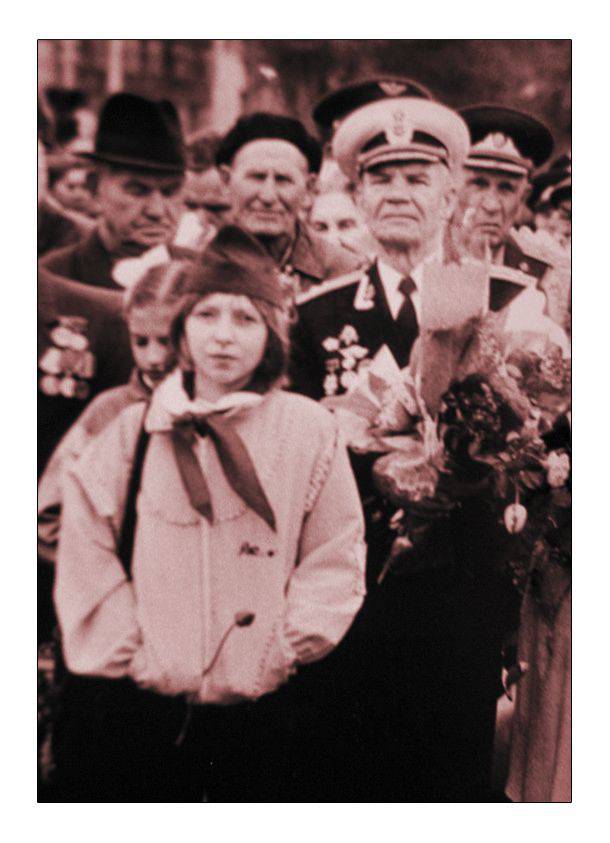 But the restless barefoot boys in the village of Bolshoy Samovets, in the Gryazi district, were not frightened by any heat. From morning to evening, they disappeared on the river - they caught nimble minnows, lazy bream, and voracious perch.

Eight-year-old Vasya Golyshkin was a notable fisherman - he could catch up to ten minnows with one worm. He also knew how to catch prey with his bare hands: he knew places at the bottom where there were, as the village boys said, nori - like holes, only more. Gained air in a thin boyish chest, climbed "below the bottom", and closed the passage with his foot so that not one gudgeon would escape. And climbed ashore, to friends, with a catch, and often with considerable.

Vasiliy also treated the nonsense skillfully. To fish in these small nets, you need a whole team of fishermen. Two must keep the nonsense, standing up to the chest in the water. And a few people play the role of "screamers" - they make noise and go towards the "holders". Vasya most often got the role of the last - the most responsible one. Here, a special skill is needed - to withstand the time while the fish in the net goes and to shut the trap at lightning speed.

Not only minnows with glass eyes but toothy pikes came across simple tricks of boys. Once in the networks, Vasya saw an unknown beast with a strange elongated nose and dark thick hair. So, in the ravings, and brought him home: "Mom! Who is this?" It turned out they caught a rare beast - a desman. But they regretted and let go.

So, in children's affairs and trades, days went by unnoticed. The seasons succeeded each other, the boys grew. After graduating from the seven-year school in his native village, Vasya entered the chemical engineering college in the small town of Gryaz, not far from the Big Samovts. But, having studied for two months, I quit — I barely had enough money for food in a large Golshkin family; it turned out to be impossible to pay the expenses for studying in the district center. And Vasya really wanted to learn. And he decided to enter the working department of the Voronezh Agricultural Institute. The competition was big, only from your class - eighteen applications. And there are only three places. But Vasily did! "Culture!" - now they were talking about him fifteen guys who had to return to the eighth grade ...

Studying at the institute was interesting. Especially liked the new student of mathematics. Tasks solved how seeds clicked. And not only their own, but all the other students in the group. True, the teacher quickly noticed and took action: he put Basil on the first desk. As soon as he carried out his assignments, he took the notebook and sent it for a walk. But the student was also not sewn up. On a draft, I did everything quickly, but I rewrote it several times: I would plant a blot, then an unexpected mistake. So he pulled out time, "pulling out" on the control and tests of his friends ...

But mom could not hold back the tears. Vasily did not condemn her. He, too, was clouded by salty moisture when the train took them away, recruits drafted into the army to distant Spassk, the city of Primorsky Krai ...

The company’s foreman issued Vasily with a cap and sent a haircut. Then all the recruits received army boots and "winding" - in a different way, footcloths. They were not able to use them, they wound them up, who could. And Basil reeled. He was seen by a water carrier, began to laugh, and then showed how to properly “shoe” footcloths. But the young soldier didn’t like the tone of the “teacher”, and he invented his own way of winding up the sisters. So this way this turned out to be convenient, that soon the whole company began to use it.

Discipline in the army was strict. One day after a busy day, a tired company of Basil went to the bathhouse.
- The song zapa-wai! - commanded the foreman.

An hour later, the company returned to the bath, as expected, singing a song ...

As the best soldier of his call, Vasily Golyshkin was sent to the Khabarovsk mortar school. Here he mastered not only the art of war, but also received the title of candidate for master of sports in fencing, was engaged in skiing. By the way, Vasily made his first skis by his grandfather, when his grandson was only four years old.

Here, in the school, Vasily unexpectedly found another one of his vocations. One evening I went to the company headman - and the disassembled clock on the table was lying. Vasily's eyes lit up: what kind of mechanism? I didn’t ask how it happened. He came to the hut, sharpened a screwdriver, asked for tweezers in the medical unit. He waited for the night, laid out blank sheets of paper on the table, lit a candle stub. And his watch was his own. He disassembled them, removed the pendulum, unscrewed the tiny cogs. And ka-ak gears wrap! Basil - more likely to disassemble, under the dial climbed. And "laid out" the clock on cogs, on wheels-gears. And then I collected, started and ... set off to build. Because it was morning already.

He experienced a lot and saw Vasily Antonovich in his life. Throughout the Great Patriotic War, he served in the Trans-Baikal Military District as a commander of a mortar company. He fought with Japan, served in a tank guards regiment, in the city of Baltiysk he led a diving school for many years, went on trips. After demobilization (retired with the rank of lieutenant colonel) twice visited virgin soil, mastered new lands. And once again I traveled all over Russia and near abroad - already as a sports judge in boxing, weightlifting and athletics ...

We met him about ten years ago, at an event for children, which was held by the library. I remember, before the guys suddenly stood a handsome old man, chest in orders and medals. He told the boys and girls about the war, then about virgin soil. The children especially liked the episode in which Vasily Antonovich, together with the warriors, detained local hooligans.

- And who is more dangerous - hooligans or fascists? - asked one of the guys.

Adults laughed awkwardly, someone whispered that there can not be compared. And Vasily Antonovich said:
- For some reason it seems to me that among you there will be neither one nor the other evil spirits. I will hope so until the last day of my life.
And you know, somehow in my heart everyone, in my opinion, has become brighter.

And after a while I visited Vasily Antonovich at home. At that time he was eighty-sixth year old, but he opened the door for me in a tracksuit and with dumbbells - you can immediately see that he was just doing exercises. He told about his life. And at the end of the conversation he admitted:

- I know one friend: Vasya, you have lived such a good life, rich in events! You defended your homeland, plowed virgin soil, you seriously engaged in sports, found an amazing hobby - after all, not everyone can thoroughly understand the complex clockwork. You can write a book about you!
And so Golyshkin said this with such pride and joy, as if these words became for him the greatest appreciation of his whole life. He didn’t regret that no one has written this book so far and is unlikely to write. But equating him to some kind of documentary-artistic hero was for Vasily Antonovich the highest award.