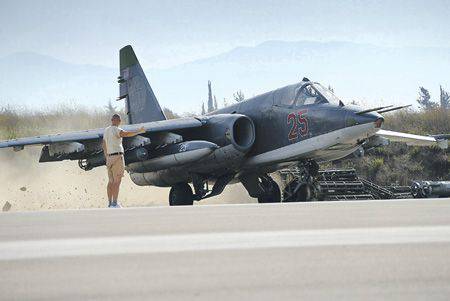 It is not clear why, following the example of “green men” and “polite people”, the personnel of the Russian air base in Latakia, given the color of their uniforms, have not yet been called “cream men”. Presumably, over time, international rumor will make up for this historical gap, although now it’s clear that ours aviation in Syria is solving strategic tasks. And very successfully. As soon as “drying up” appeared in the Middle East, not only the plans of the Islamists, who believed that victory was already in their pocket, but also the plans of more serious geopolitical players were upset. For example, the United States, who have sacredly believed in recent years that, unlike Great Britain, they rule not only the seas, but also everything else.

The myth was also greatly exaggerated that the military power of Russia during its hard times turned into a quantity so insignificant that it can be neglected in any world scenario. A coalition led by the United States bombed the position of the "Islamic State" (IG - an organization banned in the Russian Federation) for more than a year and did not achieve anything at all. In a month and a half Russian air strikes, Russian aviation cleared the way for the offensive of the Syrian Arab army — that is, for the army of Bashar al-Assad, which no one seriously considered.

But the most remarkable thing is that this operation was not impromptu like the paratroopers march to Pristina in 1999, which was followed by nothing but minute vanity and legitimate irony from our opponents.

And it was a carefully thought-out military-political action, in the preparation of which both the country's political leadership and the Russian General Staff took part in its renewed guise — freed from the dictates of the “women's battalion” that ruled the ball under the former defense minister, and received the authority to choose weaponthat you must have, based on the logic of possible battles.

To this we must add that the current General Staff is not tables and chairs, which formerly sat random people, who found themselves in the capital under incomprehensible circumstances. Over the past three years, under the auspices of the General Staff, several thousand exercises of various formats and purposes were held, which even the general staff of Soviet times could only dream of. The result - a brilliant operation in the Crimea, which can be attributed to a landmark military-political impromptu. No less elegant, everything was done in Syria. For world intelligence, it was a big surprise when our Su-34 struck the 30 of September with the first rocket-bombing attacks on the positions of the "Islamic State". However, an hour before the events, all interested parties were still informed. So as not to interfere under your feet, more precisely - under the wings.

In Syria, we flew about the same course as the Caliber cruise missiles - over Iran and Iraq. Then, under the wing of the plane, the lights of Ar-Raqqi, which the Islamic State group determined as its capital, appeared.

Already above the Khmeimim airfield, where the Russian air base was located, the crew turned off the lights and the board landed in the dark, in order not to tempt fate in the form of MANPADS (man-portable air defense systems).

Actually, Hamim now takes civilian flights, but it does not look like a civil airport - the parking of combat aircraft and a stack of bombs and missiles interfere with the peaceful perception of reality. At first, the ammunition was delivered by the Ruslans, but now more capacious sea transport is used. Therefore, the recent rumors in the Western press that the Russian pilots have nothing to bomb, are greatly exaggerated. As soon as the plane returns from the mission, it is immediately fueled, bombs and rockets are suspended (depending on the task), and it is again ready for combat use. A used "container" from under the ammunition is regularly taken out by trucks, which gives a very definite idea of ​​the intensity of combat work.

Flying here does not stop either day or night - and then the roar of jet engines is mixed in with the singing of cicadas. Moreover, as the head of the press service and information department of the Defense Ministry, General Igor Konashenkov, noted, recently our aviation is actively working on the goals indicated by the moderate opposition - most likely, the Russian military department managed to establish “business contacts” with it than official Damascus. Moreover, the reaction of our pilots is almost instantaneous: 10 minutes do not go from receiving target designation to departure.

Moreover, KABY (adjustable bombs) are used only when necessary. Basically, the usual mines are used, which gave grounds for our Western partners to declare that Russian aviation is hitting “inaccurately”. But now it has been proved that the reports of the allegedly destroyed hospital and mosque are ordinary fakes, in other words, “damaging elements” of propaganda war. As the NVO correspondent was explained at Khmeimim’s airfield, our planes are equipped with such perfect aiming complexes that in clear weather there is simply no need to use high-precision weapons. Two high-explosive bombs are usually enough to hit a target, and the second is something like a control shot.

Naturally, the Islamists have a heightened unhealthy interest in our pilots. But there is no way to get to the airbase either from the ground or from the air, even the Americans, according to some sources, have so far failed to look into our “economy” - because it is reliably covered by means of electronic warfare. However, the faces of the pilots away from sin are still hidden under the “visors” of the helmets, and the stars on some aircraft and identification numbers are deliberately erased. Therefore, only the official representative of the Ministry of Defense Igor Konashenkov, who practically does not disappear from TV screens and whom the Islamists for some reason consider to be the general of the Russian Aerospace Forces ... 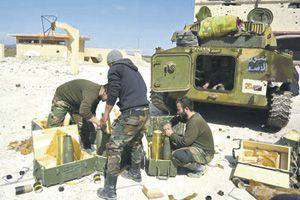 Today, the Syrian government army does not lack any ammunition and armaments. Reuters Photos
The real pilots are young people, not all have crossed the 30-year-old frontier. As old-timers recall, at first a certain stiffness was still felt - one thing the teachings, the other - combat use. But now the guys are flying like gods or better, even a map of the area is not needed. The raid on everyone is fantastic, and there were times like these when it was more of a “summer walk”. However, this condition is not familiar to the flight crew of Khmeimim airbase. They are already aces, and after three months they will be replaced by other pilots after rotation. And also learn to fly in a combat situation. There is no secret: in Syria, we not only believe in the practice of new types of weapons, but also run around in real conditions personnel.

... A little about life. At one time, the American military base in Kosovo Camp Bondsteel made an indelible impression. First, because it was erected quickly, one might say, in Stakhanov style. And when it was erected, this, secondly, there was everything that was necessary for a decent existence in the field - from the hospital and comfortable toilets to the restaurant-level dining room and laundry room. The Bundeswehr and the French lived in much the same way in the Balkans. Our paratroopers lived, to put it mildly, like cattle, and the amber from the toilets showed their location at a considerable distance.

At first, the rear men were also going to drag tents to Syria, so that, as they say, they would also stand in the desert ... Defense Minister Sergei Shoigu hacked down their “initiative” literally on the move. For a week, residential modules with air-conditioners were delivered to Latakia, where even in the 40-degree heat it was comfortable. An entire factory has been built - a kitchen and a bath and laundry complex - this means that no one eats from bowlers and no one spends his personal time on laundry. Not to send people to the ends of the world to be distracted from the performance of combat missions.

It is clear that it was not easy to transfer all this “farm” across two seas, and even so that our strategic partners did not immediately notice anything. It was a serious military operation, of which our General Staff can be proud. In the West, when Russian aviation suddenly began to strike at the positions of the "Islamic State", they literally fell into prostration. Especially Lyutov, who missed everything in the world, was US Secretary of Defense Ashton Carter, who had begun to threaten Russia with new developments in the field of nuclear weapons, and even laser weapons. He and everyone else who still doubted that Russia could stand up for themselves answered with the same coin: when the G20 summit was held in Antalya, Vladimir Monomakh successfully launched two Bulava from the White Sea water area.

But this is an “exchange of views,” so to speak, at the highest level. The situation in Syria is both simpler and more complicated. Already spent tons of ammunition, and the Syrian army just started to attack. There is success, but so far modest.

The airbase headquarters said: “Of course, we expected more ...” But the Syrian military explained this situation with fatigue (after all, four years of continuous fighting!), Moreover, the Damascus leadership did not pay proper attention to their armed forces

Now everything is changing, including morale. Even Russian advisers admit that Syrian pilots almost half a century ago literally work wonders. Last week, only in the last two days, the Syrian air force carried out a 151 combat sortie and attacked 323 targets, including seven command points east of the city of Homs, two ammunition depots and several terrorist units in the vicinity of Aleppo.

Such data was cited by the official representative of the Syrian Armed Forces, Brigadier General Ali Mayhub. According to him, in the southern region, the Syrian army established control over the zone north of the Sheikh-Miskin settlement. Under Damascus, government troops expanded the control area south of the international highway. In the center, concentrated blows were inflicted on the clusters of terrorists, as well as on the oil and gas fields of Shair and Dzhizel and on the training camps for militants near the town of Mkhin. In the north, the Syrian army, together with the militia groups, continued its offensive south-west of the city of Aleppo and established control over 15 populated areas. And in the northeast of Latakia province, the forces of Bashar Assad occupied several strategic heights.

But this is only the beginning. And the problem is that the Syrian army, which lost all wars, for example, the Israelis, does not have the experience of victories. She only has to win against the enemy, and such a serious one as the "Islamic State", behind which virtually the entire Western world is behind the scenes.

But for Syria, only Russia and, as regards military-practical assistance, the Russian General Staff. It is no secret that today a significant contingent of Russian military advisers is in the army of Bashar al-Assad, who, I think, perfectly understand that the victory of Damascus is our victory. First, the Islamists, if they are defeated in Syria, can no longer reach our borders. Secondly, many will understand that Russia is such a military ally on whom you can rely. And thirdly: a victory in Syria will be evidence that the Russian military school and the Russian military thought are still worth something. So the first successes of the Syrian army must necessarily be followed up. At any price.

Ctrl Enter
Noticed oshЫbku Highlight text and press. Ctrl + Enter
We are
About Stalin and KhrushchevWhat you didn't want to know about England
Military Reviewin Yandex News
Military Reviewin Google News
68 comments
Information
Dear reader, to leave comments on the publication, you must sign in.