November 30 2015
23
In the very near future, the newest anti-personnel mine must be adopted by the Russian army. The design of this ammunition used several new ideas and technical solutions that will improve its fighting qualities, increase overall efficiency and reduce the risk to its own troops. It is argued that in terms of its characteristics, this product surpasses all domestic and foreign samples of its class.


Such high marks were awarded to the newest domestic anti-personnel fragmentation mine POM-3 "Medallion", developed by the Research and Development Engineering Institute (NII). This ammunition is a further development of the line of domestic anti-personnel mines, designed to create mine-explosive barriers in the path of the enemy infantry. According to reports, the new mine project is based on some original ideas that have increased the overall effectiveness of the ammunition, as well as making it impossible to neutralize it. In addition, used and spent technology, borrowed from previous projects. 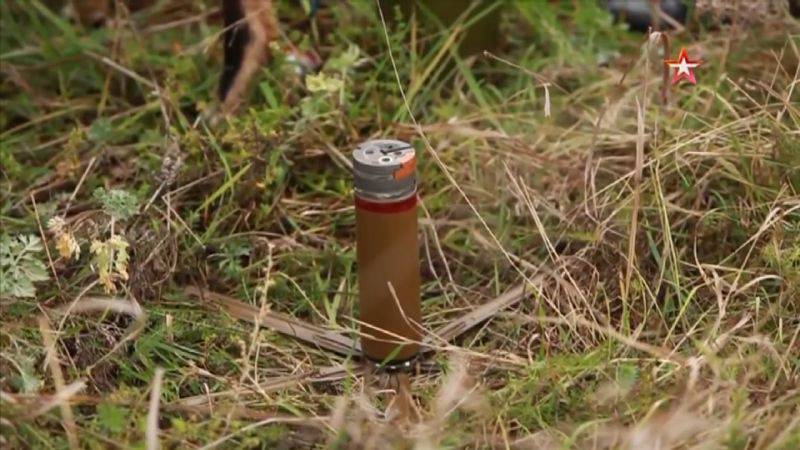 Until recently, there was almost no information available on the POM-3 product in the public domain. There were only a few photos of a model of a certain ammunition, approximate information about its characteristics and a patent, which could be considered a description of this particular mine. Not so long ago, the situation has changed. In the next release of the TV program “Military Acceptance” of the channel “Star” called “Mines. Invisible Hunters ”was demonstrated a new anti-personnel mine, and also revealed some of the details of this project. The amount of available information about POM-3 has increased significantly, although some data on this project are not yet disclosed.

The newest mine is designed to organize minefields and destroy enemy personnel. To increase the effectiveness of hitting the target, the mine is equipped with an ejected fragmentation warhead. In addition, it is equipped with an electronic system that searches for targets and is responsible for undermining the warhead. An important feature of the new project is the use of some new equipment that enhances both the working and combat characteristics of mines.

Outwardly, the Medallion mine in the transport position is a metal cylinder with a diameter of about 6-7 cm and a height of about 20 cm. Such dimensions allow the installation of new mines using remote mining systems, which include cassettes of the corresponding type. Standard cylindrical metal cassettes can be used by various remote mining systems, both ground and aviation. All this greatly increases the flexibility of using new ammunition.

The main element of the new mine is a cylindrical body, inside and outside of which all other parts are mounted. Thus, an orientation system is installed on its outer surface, made in the form of six spring-loaded supports. In the transport position, these parts lie along the body, and when cocked, mines are opened and the body is mounted vertically or at a slight angle to the vertical, depending on the characteristics of the surface on which the ammunition fell. This ensures the optimal position of the mine during operation and more effective destruction of targets.

Also on the outer surface of the body is a tubular casing pin seismic sensor target. When you mine the pin goes deep into the ground. With its help, the mines electronics monitors the situation and determines the approach of various objects, including enemy manpower. Such systems have already been used on some domestic anti-personnel mines, and their effectiveness has been proven in real combat conditions.

Mina POM-3 "Medallion" is equipped with a special electronic unit responsible for processing signals from the seismic sensor of the target and controlling the warhead. A set of special electronics receives signals about the vibrations of the soil under a mine and compares them with the signatures in memory. If the vibrations are similar to those caused by the steps of a person, and also have sufficient amplitude, indicating that the target is approaching, a command is given to trigger the warhead.

In the TV program of the channel “Star” it is noted that such systems for setting goals are used for a long time. The first domestic model of anti-personnel armament with a seismic target sensor was an explosive device NVU-P “Ohota”, which could determine the approach of the enemy and alternately undermine up to five anti-personnel mines, controlled by wires. The ability to determine the type of source of ground vibrations significantly increased the efficiency of the device. So, in Afghanistan, the mojaheds often drove a herd of sheep through a minefield, which at the cost of their own lives cleared the passage. The Hunting device and other weapons using a seismic target sensor with processing equipment do not react to small cattle and other objects that differ from humans.

Electronic equipment promising mines "Medallion" has several new interesting features. It is argued that there is the possibility of not only remote mining, but also remote control of fuses. Thus, without having direct contact with mines, the miner can set the basic parameters of their work, such as the time of self-destruction or the mode of operation. In particular, the possibility of deactivating mines is mentioned, returning them to the transport position. In this case, they can be assembled and later installed in a new place.

It is claimed that the seismic sensor of the target and the perfect electronics of the mines make its neutralization impossible. Any unauthorized attempt to get close to a mine will be stopped. Approaching a distance of several meters, the enemy sapper will trigger a mine. Attempting to move it from its place with the help of a cable will also end in an undermining. Thus, the discovered “Medallion” mine can be destroyed in various ways (although not without risk to the sappers), but all attempts to neutralize it and take the whole are doomed to failure. 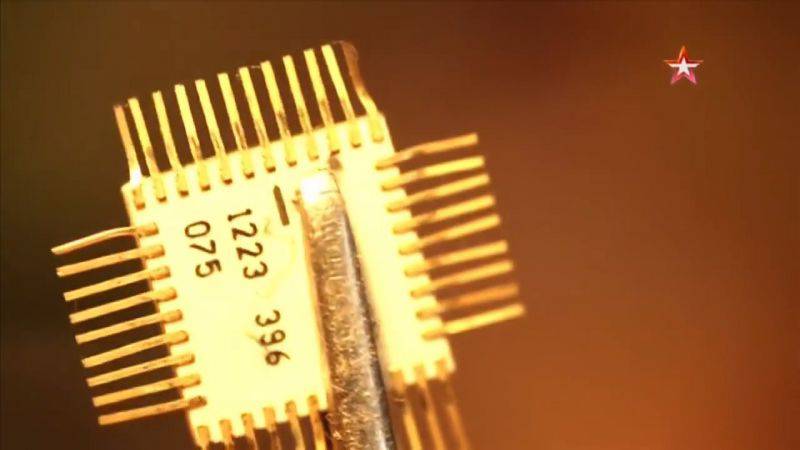 Electronic "brain" of a new mine. Frame from m / n "Military acceptance"

As follows from the published data, upon the expiration of the established period of operation, the POM-3 mines self-destruct and turn into a relatively safe piece of iron with an explosive “filling”. First of all, electronic equipment is being destroyed, due to which the enemy loses the ability to pick up the spent mine and study it. The probability of hitting the working electronics in the hands of the enemy is reduced to a minimum, which contributes to the preservation of its secrets. In addition, the fact that all the electronics of a new mine is built on the basis of the domestic element base, without the use of imported components, works to preserve secrecy to some extent.

Of great interest is the combat part of a promising anti-personnel mine. To increase the combat effectiveness of the mine is equipped with ejected warhead. At the command of the electronic unit, the expelling charge is undermined, after which the warhead of the mine “jumps out” to a height of about 1-1,5 m above the ground. At this altitude, the main charge is undermined, which is responsible for the dispersion of the fragments and the defeat of enemy personnel.

In order to increase the destructive power of the fragments and reduce the dead zones, the mine POM-3 is equipped with a combat part of a new design, equipped with original striking elements. Instead of a fragmentation shirt in the form of a cylinder with grooves or finished striking elements, semi-finished fragments are used. The main explosive charge and fuse are installed inside the structure, assembled from a large number of special rings, shaped like gears. It is argued that the name of the mine "Medallion" goes back to this particular design of striking elements. 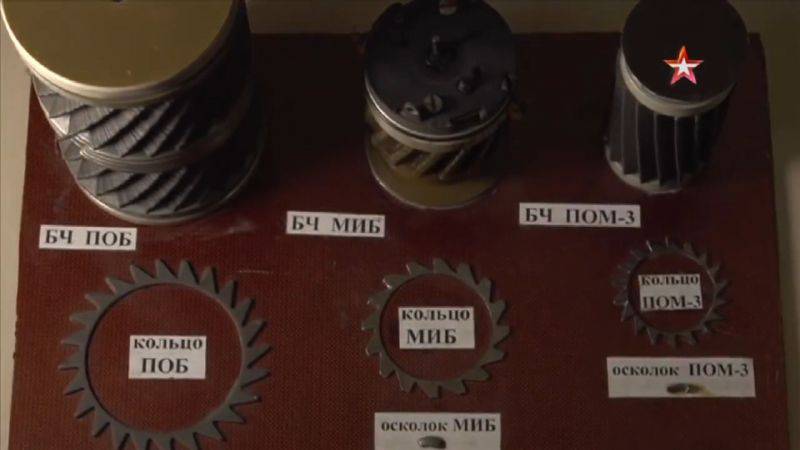 When the main charge is blown up, these rings are broken into thin sections and disintegrate into many triangular or trapezoidal fragments. The latter, rotating around their axis, fly apart in different directions and form a large affected area. Due to the large number of fragments of a special form and their correct orientation, effective destruction of manpower within a radius of at least 8-13 m from the point of detonation is ensured. Unprotected enemy fighters are guaranteed to be wounded at distances from 13 m, having body armor - from 8 m.

The design of the POM-3 "Medallion" mine and the main features of the existing electronics allow you to organize mine blast barriers in various ways. These munitions can be installed either manually (by simply scattering in a specified area) or using various remote mining systems using unified cassettes. The mining method and equipment for this purpose are selected in accordance with the tactical situation and the capabilities of the engineering units.

The authors of the TV program “Military Acceptance” report that the new anti-personnel mine POM-3 will be adopted by the Russian army in the very near future - only a few months are required to complete all the remaining work. Thus, it is likely that by the middle of next year the engineering troops will receive a new means of fighting the enemy’s infantry. 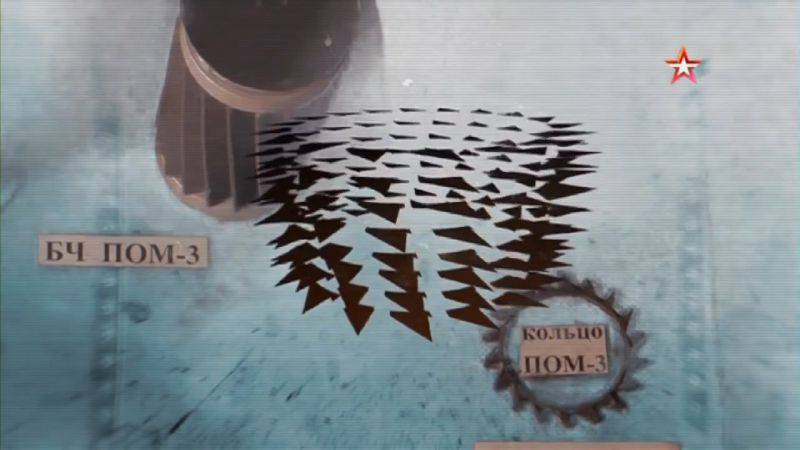 Demonstration of the principle of operation of damaging elements. Frame from m / n "Military acceptance"

It is also noted that the Research Institute does not stop work on promising anti-personnel mines. Currently, work is underway to improve fuses with seismic sensors of the target, as a result of which mines should receive new opportunities. So, due to the use of additional magnetic sensors, it is planned to provide an opportunity to distinguish enemy fighters from the civilian population. In this case, the seismic sensor of the target should be responsible for finding people, and the magnetic one will search for weapon, protective equipment and other large metal objects that distinguish civilians from military.

The available information about POM-3 “Medallion” mine suggests that due to a number of new ideas and technical solutions, the project authors managed to solve several important problems, as well as to improve the main characteristics of these weapons. For example, a seismic sensor of the target and an electronic fuze with a number of new functions provide for the secret placement of mines, which are not unmasked by stretching threads or other features typical of previous mines. In addition, there is the possibility of remote control of mines, which, among other things, simplifies the clearing of already installed barriers. Finally, a new mine is protected from enemy sappers, who may try to neutralize it and take it as a trophy to explore.

All of these features of the Medallion product, which will soon be put into service and will be mass-produced, will significantly increase the potential of the engineering troops to create anti-personnel mine-explosion barriers and thereby to a certain extent improve the defense capability of all armed forces.