November 20 2015
109
Ukrainian Prime Minister Yatsenyuk gave an interview to the Latvian media Latvijas Avize. Given the specificity of the narrowly focused rhetoric of Yatsenyuk, it was possible to initially assume that the essence of the interview would be reduced to listing Ukrainian “Peremog” and counteracting “Russian aggression”. In principle, it happened.


Yatsenyuk began by reminding the Balts once again, and with them to the entire EU, that the “European shaft”, the net fence, is being erected on the border with Russia according to his (premier) order. However, according to Yatsenyuk, the “European shaft” is what will, of course, save Europe from “Russian aggression”. At the same time, the ukropremier didn’t bother to clarify (although Latvian journalists didn’t want to ask him) how the metal net and the ditch dug on the border with Russia will help Europe to withstand, for example, new waves of migrants from the Middle East and Africa ...

But Yatsenyuk asked about the state of the Ukrainian army. Yatsenyuk:
20 months ago we had 5 thousand units of fully combat-ready and qualitatively strong warriors. Now we have created an army in a new way, in which 250 is a thousand soldiers, and also in the National Guard of Ukraine there are also 50 thousand of national guardsmen. We spend 5% of national GDP on national security and protection. Our army is the only one in Europe that is fighting against Russia, stopping it from further aggression. Our army receives help from American and Canadian friends. Five NATO trust funds are available for Ukraine, in particular, to improve military supplies. Our army protects the European Union, EU member countries, including Latvia. Remember Budapest 1956 of the year and Prague in 1968, when the Soviet army intervened there. Then the Soviet soldiers were based in almost every country in Eastern Europe. Putin wants to conquer and revive the Soviet empire. Meanwhile, the Ukrainian army protects peace and stability in Europe. 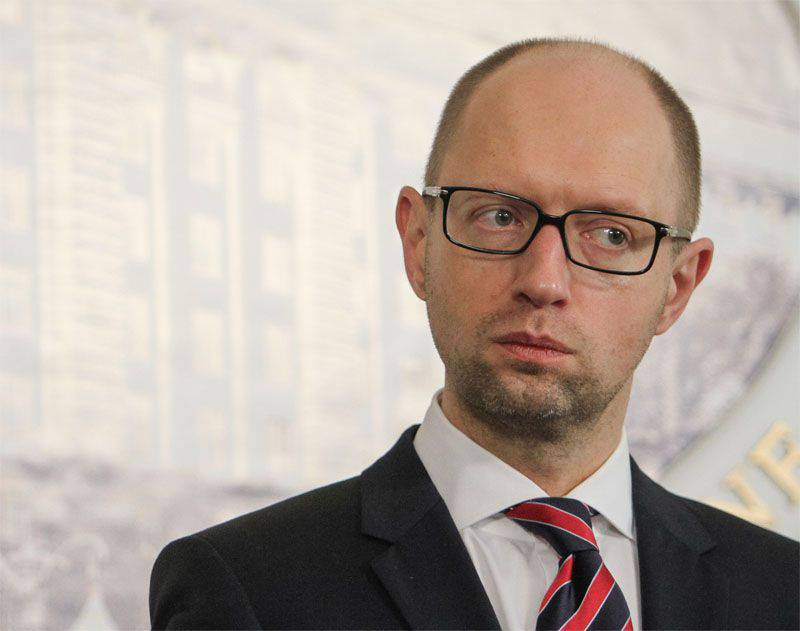 In the meantime, the Ukrainian army "protects peace and stability in Europe" (which Europe doesn’t even guess), the terrorists of the "Islamic state" are becoming more active, leaving the state of "sleeping cells" in Belgium, France, Germany, arranging bloody terrorist acts in Paris and its suburbs , completely paralyzing the usual life of EU citizens.

Latvian journalists decided to find out from Yatsenyuk whether he considers the Russian president a criminal?

Yatsenyuk, for fear of becoming personal:
I think that what Russia has done in Ukraine is an international crime. Russia seized the land of an independent state, illegally annexing the Crimea, sent its troops and supporters to eastern Ukraine and began to carry out real aggression. These are clear violations of international law. Yes, there are financial losses, but Russia for these actions should be consistent with criminal liability.

At the same time, Yatsenyuk had to answer the question about the possibility of the return of the Crimea. This question, Yatsenyuk, who literally through each proposal expressed gratitude to Western "partners" for support, called difficult, and said that after some time, thanks to political and legal means, Crimea will return to Ukraine. It is interesting what kind of modern "legal means" that regulate the possibility of transferring the territory of one country to another without the consent of citizens, was meant by Mr. Yatsenyuk ...

They asked Yatsenyuk about the statements of the head of the RF IC Alexander Bastrykin regarding participation in the 1 of the Chechen campaign.
Yatsenyuk:
On the one hand, such messages are completely idiotic. On the other hand, I can explain the roots of this myth. The institutions of the Russian government base their allegations on testimony obtained as a result of the torture of citizens of Ukraine, who said that Yatsenyuk took part in the Chechen war. Testimony obtained through torture has no legal basis. It is part of the strategic communications of Russia, is engaged in deception and lies. Russia directs the information war not only against Ukraine, but also against your country.

It is interesting, and what legal grounds do the statements of Ukrainian officials (the same Mr. Yatsenyuk), caught up in the blood of the anti-constitutional coup and thousands of promises, none of which have ever been fulfilled? ..

Ctrl Enter
Noticed oshЫbku Highlight text and press. Ctrl + Enter
We are
109 comments
Information
Dear reader, to leave comments on the publication, you must to register.