Is the goal of the USA “controlled chaos” in Central Asia?

November 23 2015
54
After the recent visit of John Kerry to the five countries of Central Asia, Russian experts began to ask themselves: what, in fact, do the US want to achieve in the region? Political competition, “own game” and collision of interests are supposed - up to the formation of a new cold war front, and even a hot war. In the course and the theory of "controlled chaos." 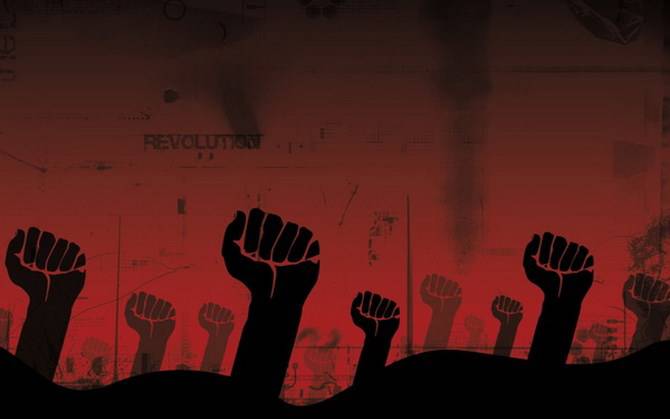 Three weeks ago, the visit of US Secretary of State John Kerry to Central Asia ended. Mr. Kerry visited five states: Kazakhstan, Tajikistan, Uzbekistan, Kyrgyzstan, and Turkmenistan. The coverage is impressive: five countries in a row - and all in three days, with some wild political haste, usually not typical of Washington. Americans seem to be afraid of something important to miss in the region.

Experts believe that Kerry’s visit was a frank demonstration of the growing American influence in Central Asia, and nothing else. Washington is unfolding a confrontation with Russia in the region — analysts familiar with the local situation are expressing such gloomy thoughts. For some reason, our experts do not believe in the idea of ​​“strengthening relations with the states of Central Asia through economic partnership” preached by the State Department, as well as in “cooperation in the field of security”.

Material Boris Savodian on IA "REGNUM" is called unequivocally: "Russia is being pushed out of Central Asia through Afghanistan."

The analyst believes that the White House continues to think in the categories of the Cold War. He continues to build on the same concepts that were used in the era of the USSR, especially in the years of Reagan, who called the Soviet Union an “evil empire”.

“Although the United States assures the world that they have abandoned the thinking of the Cold War,” the analyst writes, “nevertheless, you can see with the naked eye: this war is not thrown into the archive, and it continues to gain momentum in all regions of the planet.”

Savodian assumes that the task today is to push Russia not only from the regions that supported it earlier (from the countries of the Middle East), but also from Central Asia.

““ After all, what is Central Asia? This is such a construction in a Eurasian house, which, it seems, does not play a special role, but if you break it, pull it out - the cracks will go along all the walls and the destruction of the home is inevitable. Moreover, the inhabitants of this dwelling are a touchy people, hardly perceiving external pressure. To pull out this fragile structure, to prevent the emergence of Eurasia braces (pipeline, railway, energy, infrastructure, etc.), which make it into a single trade and economic whole without dividing geopolitical lines drawn on the Pentagon maps, John Kerry was the first US Secretary of State and visited all five post-Soviet states. ”

According to the analyst, John Kerry’s past visit to Central Asia should be regarded as a challenge to the Russian Federation. The appearance in five countries of the US Secretary of State shows: The United States does not intend to give up its influence in the region; on the contrary, “in the light of the Syrian and Afghan crises,” they “will increase the geopolitical and military presence there.” In turn, Moscow is not interested in losing its influence. To keep Central Asia in "orbit", Russia will have to "gather strength for a joint meeting of new challenges," the expert is sure.

Mikhail Sheinkman on the radio "Satellite" with his characteristic irony, says that Central Asia for Americans today is “the most suitable place to take the soul”.

“Well, or try not to let Russia take revenge for everything, but at least shake the diplomacy on its field,” the author continues. True, in order to "shake", Washington will have to work hard. Here not only Moscow leads the game: Beijing is in operation in Central Asia, and now Delhi is operating. And Japan is catching up: in Central Asia, the recently accepted head of the Japanese government, Shinzo Abe.

“But Washington has its own approach,” says Sheinkman. - The stake is not on economic, but on military-political cooperation. They are all interested in this. Well, maybe Kyrgyzstan with “Manas” has already said how to cut it off. Although with her, they believe in the United States, all is not completely lost. ”

A full picture of American interests in the region was depicted by an expert on Central and South Asia, Bahodur Sharifov and Peter Skorobogaty (magazine "Expert").

“The risks of a new war on the southern frontiers of Russia are growing rapidly,” say the co-authors. “To stop the destabilization of Central Asia, we need to increase political influence through major economic and infrastructure projects.”

Where such alarming forecasts? And how to "increase" the impact?

Analysts remind that Central Asia strongly depends on the geopolitical interests of regional and world powers, because it has a unique geographical position - between China and Europe, Russia and the coast of the Indian Ocean. The authors believe that Russia itself has missed its regional interests in 1990's: “Instead of Russia, which in the 1990's mess, had little interest in the affairs of the former fraternal republics, China came with its incredible capital. In Afghanistan, the Anglo-Saxons with NATO allies settled in the neighborhood. There are far-reaching plans for the Arab states ... "Experts note that the lack of a long-term strategy of relations between Russia and local states" leveled all diplomatic bonuses that Moscow had in the region immediately after the collapse of the Soviet Union. "

At present, the region can be called “ownerless”. And if so, they will play on this: it is beneficial for many that Central Asia "plunge into chaos and for some time lose its strategic attractiveness to competitors." This is the theory of "controlled mess", analysts write, which Americans have been implementing in the past three decades. Examples: Yugoslavia, Iraq, Libya, Syria.

Who will be the curator of the coming destabilization of Central Asia? According to analysts, the role of curators will be played by the “main moderators of the Arab spring”: Qatar, Saudi Arabia and Turkey. These states are interested in strengthening Sunni Islamism. It would not be out of place to weaken Iran’s neighbors and partners. Methods of “curators”: funding and political cover for the militants of the local “opposition”. In addition, Turkey will continue to build a “big Turkic world” in the framework of the “New Ottoman Ports” model. Pan-Turkism is popular in the states of Central Asia, “with the exception of Tajikistan”.

“The trouble is that even a local escalation of violence in the region will quickly develop into a large-scale armed conflict. Nearby are the warring Afghanistan and Syria, which will immediately put the militants, "luck catchers", religious fundamentalists. Enough and local, discarded from the life of citizens. The clashes will be different oriental insidiousness and cruelty, so that the actions of the "Right Sector" in Ukraine seem childish prattle. This was already shown by the war in Tajikistan, which broke out in the early 1990-s and lasted for seven long years. According to rough estimates, about 200 thousand people died then, which exceeds the total number of people killed in all the conflicts taken together in the post-Soviet space. ”

Now about the prerequisites of possible conflicts. Experts list a low standard of living, border disputes, the struggle for water resources, Islamization. The situation is especially explosive in the triangle Uzbekistan-Kyrgyzstan-Tajikistan.

Regional Islamization also seems to be one of the most dangerous processes for analysts: “The speed with which the population of the entire region is being sub-Russian to the south of the Russian borders is amazing. The number of mosques in Tajikistan has exceeded the number of general education schools - over 4 thousand by 8 million people. 17 mosques are registered in 2228-million Kazakhstan, in Uzbekistan with a population of over 30 million 2050 mosques function, and in the five million Kyrgyzstan and Turkmenistan mosques there are 2200 and 400 mosques, respectively.

Today, people from Central Asia constitute one of the most numerous international contingents involved in conflicts around the world. In August last year, the native of Tajikistan was appointed the emir of “IG” in the province of Ar-Rakka. Experts are not surprised that Central Asian territories are included in the planned “Caliphate” borders.

What are the threats of destabilization of Central Asia for Russia?

A lot of dangers. Here is a brief list of them: 1) a possible increasing flow of refugees (70 million people live in the region, and Russia does not even cope with illegal labor migration, moreover, it “digests” hundreds of thousands of people who left the Donbass); 2) extremists and recruiters will rush to Russia with refugees; 3) will increase the likelihood of the Islamist underground awakening in the North Caucasus and in the Volga region; 4) there is also the threat of a military invasion of "Islamic State" troops in Central Asia. Analysts do not consider Kazakhstan a “buffer” capable of stopping militants on long-distance approaches, moreover, they note that “a significant population of the southern regions ... will join the Islamic radicals, especially in the places of compact residence of the Uzbek community”.

Analysts forecast: in the event of a coordinated attack by extremists on the states of Central Asia, Russia will have to intervene at the initial stage of the war, not only within the framework of allied relations with the states of the former Soviet bloc, but also to prevent threats to its national security.

To summarize The Americans started a geopolitical "expansion" in Central Asia at the most appropriate time. That is why they are in a hurry. Russia is weakened by sanctions, lower world oil prices, inflation, political squabbles due to Ukraine (including the obviously insoluble situation with a large loan extended to the Yanukovych government), costs related to the Crimea, and the problem with Ukrainian refugees. In addition, you have to fight in Syria against the group "IG".

The appearance of Uncle Sam in Central Asia will inevitably create another regional contradiction, where the interests of the "security" of the United States and Russia will clash. The controlled chaos in Central Asia would allow the Americans to arrange a major hotbed of tension at the borders of Russia and form a permanent threat in this direction. That is why, when visiting Kyrgyzstan (the old definition of Kerry himself), the US Secretary of State was not particularly worried about the nasty "democracy" there.