The last flight of the Buran

November 21 2015
149
When the Soviet reusable Buran spacecraft touched the runway near the Baikonur cosmodrome, there was no limit to the jubilation of the MCC staff. It's no joke to say: the flight of the first Soviet "shuttle" was watched all over the world. Tension was beyond, and one hundred percent guarantee of success, as is always the case when it comes to space, no one could give. 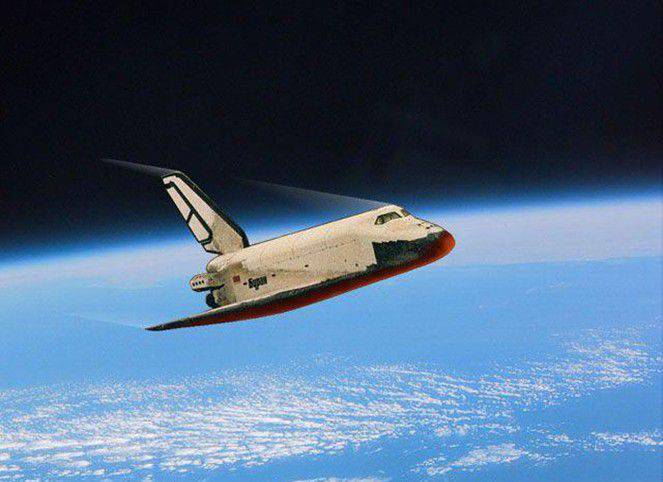 15 November 1988 of the year the Soviet drone "Buran", overcoming gravity and going into a given orbit, made two circles around the Earth in 3 hours. 25 minutes, then calmly landed exactly at the specified place, deviating from the specified trajectory of everything ... on 5 m . Truly filigree work included in history space exploration as a true triumph of domestic science and technology! Unfortunately, the first flight of the Buran turned out to be the last.

... The idea to create a reusable spacecraft excited the minds of scientists at the dawn of cosmonautics. So, in June 1960 of the year, long before the first manned flight into space, a meeting of the Politburo was held, at which it was decided to begin work on creating spacecraft for orbital flights around the Earth with a landing at a given aerodrome.

The development of such devices engaged in the two leading design bureau of the Soviet aviation industry: Mikoyan and Tupolev. And in 1966, the specialists of the Gromov Flight Research Institute joined the work. As a result, by the middle of the 1970-ies, an experimental model of a manned orbital plane, called the "Spiral", was created. It is known that this predecessor of the Buran 10 t weighed, could accommodate a crew of two people and very successfully passed the necessary flight test program.

It is also known that around the same time in the Soviet Union a reusable aerospace system (MAKS) was created. Starting from the An-225 carrier aircraft, an orbital plane could deliver two cosmonauts and a payload of up to 8 tonnes to a near-earth orbit. A two-stage light-weight rocket “ Burlak. The rocket weighed no more than 1000 t and could launch into outer space from a Tu-30 aircraft carrier.

Experimental orbital plane, created by the program "Spiral"
So, work on creating a reusable spacecraft in our country has been going on for a long time and very successfully. However, despite the obvious achievements, reusable spacecraft in the USSR did not launch into mass production for a long time. The reason for this was the fundamental differences among the leading designers of space technology. Not everyone considered the development of “shuttles” expedient. Among the principal opponents of reusable spacecraft belonged, for example, the chief designer of the OKB-1, Sergey Korolev.

He considered the most promising in those conditions, the accelerated development of rocket production - even to the detriment of other space programs. And they had their reasons, because at the end of 1950-x - the beginning of 1960-s, the forced development of powerful launch vehicles dictated military necessity: we needed reliable means of delivering nuclear weapons. And Korolev and his comrades brilliantly fulfilled this task. Thus, the country's leadership was able to solve two strategic problems at once: to begin exploring space and ensure nuclear parity with the United States.
And later, in the 1970-s, the development of the national astronautics, obviously, went according to the thumbnail. It was easier to improve the existing equipment than to undertake radically new projects, the outcome of which was impossible to predict.

And yet in the middle of 1970-x at the highest level, they again returned to the idea of ​​reusable spacecraft. For the development of the Soviet serial "shuttle" in the 1976 year was established NPO "Lightning". It includes the design office of the same name, which has already been engaged in the creation of reusable space systems, as well as the Tushinsky Machine-Building Plant and the Experimental Plant in the city of Zhukovsky. The union was led by Gleb Lozino-Lozinsky, who by that time had vast experience in designing reusable spacecraft. 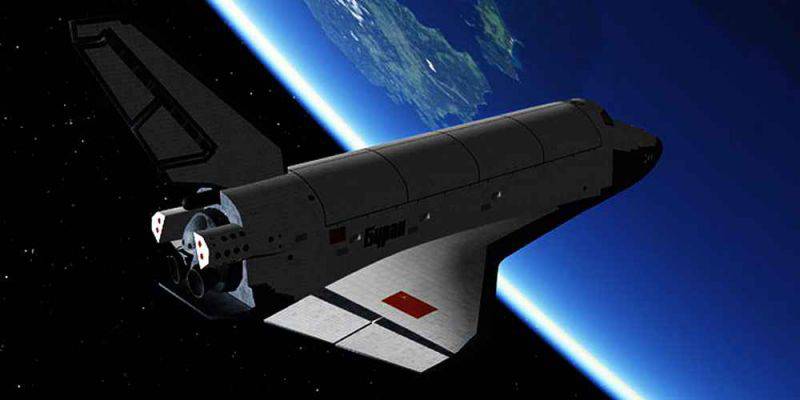 The result of a decade-long work of Lozino-Lozinsky and his team was the retired orbital cruise ship Buran, or the product 11Ф35, according to secret terminology of those years. The “product” was intended for launching into orbit of various space objects and their maintenance, for returning malfunctioning or outdated satellites to Earth, as well as performing other passenger-and-freight services along the Earth-to-space-to-Earth route.

In order to launch the Buran into orbit, a universal two-stage launch vehicle, Energia, was developed. The power of its engines is such that the rocket, together with the Buran, reaches an 150-kilometer altitude in less than eight minutes. After that, both stages of the launch vehicle are successively separated, and the engines of the space shuttle itself start automatically. As a result, “Buran” in a few minutes rises another 100 km and enters a given orbit. During the first flight, the maximum height of the shuttle orbit was 260 km. However, this is not the limit. The design features of Buran are such that they allow 27 tons of cargo to be raised to a height of up to 450 km.

In just ten years, under the program "Energy-Buran" three reusable spacecraft were built, as well as nine technological dummies in various configurations for conducting various tests. Two more ships, laid down at the Tushino Machine-Building Plant, were never completed.

However, the next round of interest in reusable space systems again did not lead to tangible results. Just at that time, the Space Shuttle program was actively developed in the United States, and free competition with the Soviet Buran was not part of American plans. That is why the Yankees made unprecedented efforts in order not only to force the Russians to curtail their work in this area, but also to discredit the entire Soviet space program altogether. 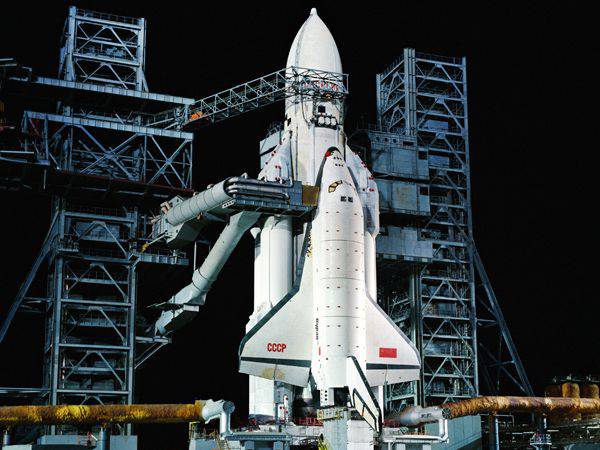 "Buran" at the launch site. Albert Pushkarev / TASS photo chronicle
Through their agents of influence, the Americans, beginning in the middle of the 1980s, began to forcefully place in Soviet society views on space as the main brake on the country's socio-economic development. Say, why do we even fly into space, and even more so expensive projects like Buran, if the stores do not have enough sausage? And such “arguments”, unfortunately, worked. A timid explanation of scientists about the importance of basic space research, which already brought a huge economic effect, drowned in the general flow of "anti-cosmic" psychosis. It is not surprising that under conditions when even the obvious achievements of Soviet power (and space belongs to them) in the era of “Gorbachev perestroika” were perceived as a burping of the totalitarian regime, the Energy-Buran project had opponents of the highest political caliber.

Moreover, those who were obliged to defend the interests of the national astronautics suddenly began talking about the uselessness of the Buran. The arguments that Roskosmos officials brought were as follows. Say, the United States already has its own Shuttles. And we are friends with the Americans. Why do we need our own “Buran” when we can fly with our American colleagues on the Shuttle? The logic is amazing. If you follow it, it turns out this way: why do we need our own auto industry when the Americans have Ford and General Motors? Or why do we need our own airplanes, if Boeings are manufactured in the USA? However, the “argument” turned out to be reinforced concrete: at the beginning of 1990's, all work on the Energy-Buran project was abandoned. We voluntarily ceded leadership to the United States ... 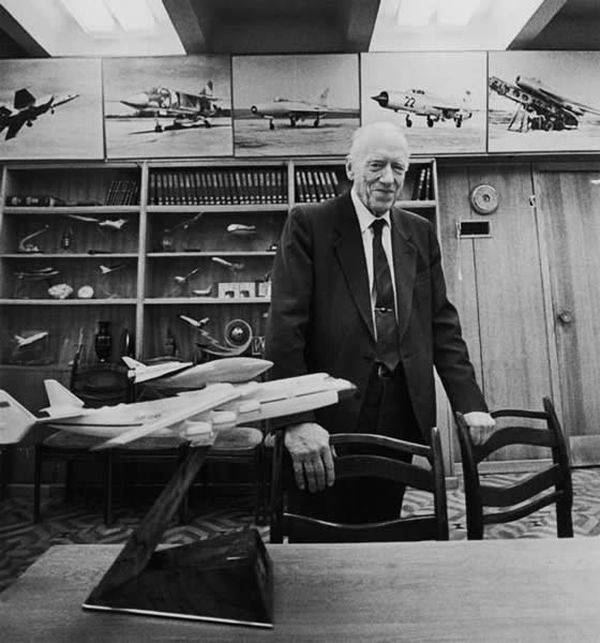 Gleb Evgenievich Lozino-Lozinsky in his study
The fate of the already built "Buranov" was sad. Two of them were practically rotted at Baikonur, the unfinished shuttles and test samples were either sold cheaply for the cordon, or they were taken apart by parts. And only one “Buran” (011 number) was lucky: for a long time it was used almost for its intended purpose. October 22 1995, an outstanding creation of Russian engineering thought, was towed to the Gorky Park of Culture and Leisure in Moscow and opened a unique attraction there. Anyone wishing to pay for the entrance ticket could experience the full illusion of space flight, including artificially created weightlessness.

The dream of the ideologists of “perestroika” and reformers of the Gaidar spill came true: the cosmos began to bring commercial income ...

Ctrl Enter
Noticed oshЫbku Highlight text and press. Ctrl + Enter
We are
And how up there? Report from MCC“Buran” and “Shuttle”: such different twins
Military Reviewin Yandex News
Military Reviewin Google News
149 comments
Information
Dear reader, to leave comments on the publication, you must sign in.