The first victories of Prince Mikulinsky

November 23 2015
10
Skillful commander Prince Semen Punkov-Mikulinsky came from a family of high-born and rich. Her история associated with the Tver land. 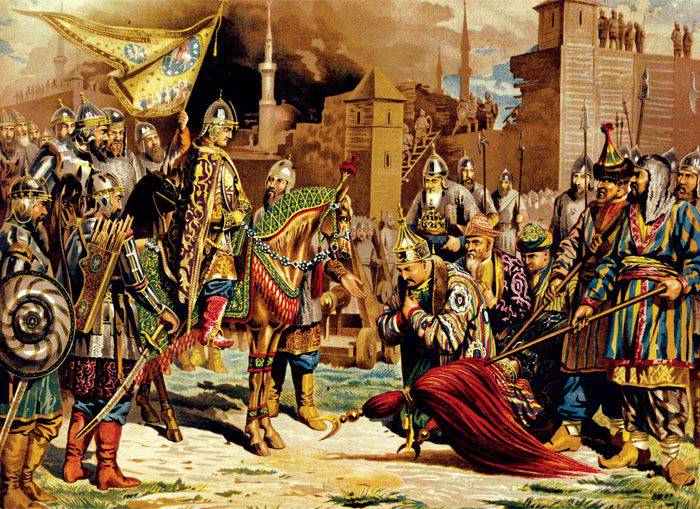 Captured Edigir, the king of Kazan, lead to Ivan IV. Hood Alexey Kivshenko
In the Grand Duchy of Tver there were several destinies. They were given to relatives of the rulers, as well as representatives of the side branches of the Tver ruling house. It was from such a younger branch that the births of princes Mikulinsky, Telyatevsky and Punkovs grew. All of them represented the "heirs in a straight line" of one of the greatest political figures of Russia of the XIV century - Grand Duke Mikhail Yaroslavich. But Tver gradually weakened, and Moscow strengthened. From the middle of the 15th century, the offspring of the family went one by one to the service of the Grand Duke of Moscow. In 1485, Tver lost its independence. The whole land of Tverskaya joined the Muscovite state, and with it the last princely families, who remained loyal to the Tver overlord.

The Punkovs, though well-born Rurikovichs, belonged to one of the youngest branches of the branched family. They did not differ either in wealth or in high ranks, nor in the influence at the Moscow court. Semen Ivanovich's father served honestly, but he did not come out in big ranks. From time to time he was put in command of the regiments, but they were not allowed into the Boyar Duma. Meanwhile, the older branch, which owned the old patrimonial nest - the city of Mikulin - and bore the proud name of the princes Mikulinsky, has achieved much greater success in the Moscow service.

Actually, while the elder cousin of Punkov was alive, Prince Vasily Andreyevich Mikulinsky, they themselves were not really called Mikulinsky, in the documents you see more often - Punkovs and Punkovs ...

Unlike most Russian governors of the 16th century, it is almost certain when Simon Ivanovich was born - in 1509 or 1510. And his daughter became the daughter of Vasily Grigorievich Morozov from an old boyar family.

For the first time, the name of Semyon Ivanovich appears in the voivodeship list of May 1533. He was appointed to command the advanced regiment in the army, deployed to counter the Crimean Tatars. It is not known whether he held any less high positions before.

From this date, the prince plays the role of a figure who is constantly present on the Steppe Front of the Moscow State, stretching a colossal arc from Meshchersky land to Novgorod-Seversky. He will spend here twenty years and never lose the case. 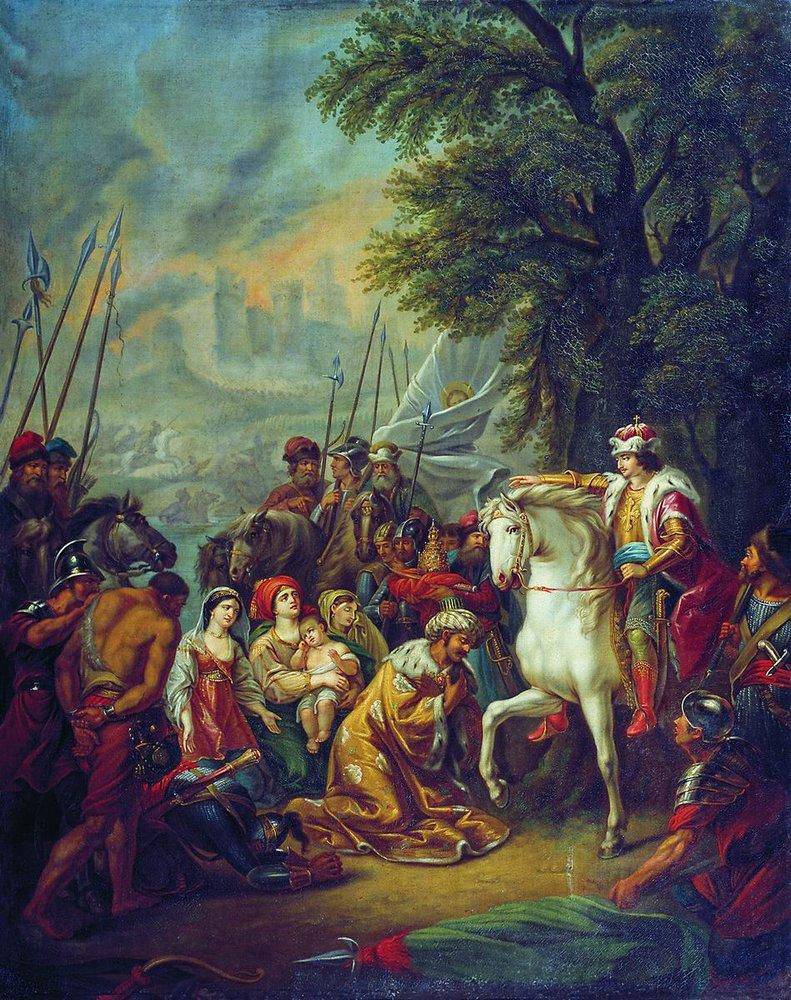 Ivan IV near Kazan. Hood Gregory Ugrumov
August-September 1533-st caught him the second commander in Tula. Then the Crimeans "with many people" plundered the Ryazan region.

A year passed, and again the Tatars - the Azovs and the Crimeans - appeared on Ryazan land. Oka makes two turns here, puts wide loops in a southerly direction. Pronya and Tsna stretch to the south of the river, but their current is such that they do not block the road to the invaders. And the whole Oka "corner" is far to the southeast, representing the outskirts of the state. By virtue of such an arrangement, the Ryazan region served for centuries as an ideal target for Tatar raids.

In 1534, Semyon Ivanovich stood in Ryazan as a voivode "outside the city", that is, with an army intended for reconnaissance and fighting off light Tatar detachments. Having insignificant strength, the prince rushed at the enemy, hoping to dash him away with the boldness of his actions. Maneuver a success. Having hit the Tatars on the Prone River, the voivode knocked them over, put many in place, and sent 53 a prisoner to Moscow.

At that time, the Grand Duke of Moscow had not yet emerged from infancy, and his mother, Regent, Elena Glinskaya, ruled for him. With surprise, the Grand Duchess peered into the face of the young commander, complaining about him in the name of her son. Up to now, nobody knew Semyon Ivanovich. Is it wise! He was barely 24.

In the autumn of 1539, a new meeting takes place with his “old acquaintances” - the Crimeans, who came to Russia. The Crimean prince Imin came in late October "to Kashira sites" with a strong detachment. From Ryazan, Semyon Ivanovich moved across from him, apparently, already leaving from “combat duty”. He managed to capture the "tongues". Not knowing what forces the Russian voivode has, the Tatars considered it a blessing to retreat, not taking "full". According to the chronicler, not so much by force, as by “God's fear,” Imin and his people “trembled and walked away from Ukraine’s Grand Duke”.

Another success in the record of the young governor.

And at the end of 1539 (whether in the first half of 1540), he already commands a small army of three regiments in Ryazan.

Around 1540, his elder kinsman died - Prince Vasily Andreyevich Mikulinsky. And the young commander fell inheritance, instantly made him a person rich and influential. He got the title of Prince Mikulinsky, vassals and the city itself, where Semyon Ivanovich turned out to be the sovereign. Almost a specific prince of old times, although in the service of the sovereign of Moscow.

A year later, a direct and terrible clash of two armies took place: the Crimean Khan and the Russian sovereign.

August 1541 th Prince Semen Ivanovich Punkov-Mikulinsky met the first commander in Zaraysk. Or, as they used to say in the old days, "at Nikola Zarazsky." Crimean Khan Sahib-Giray came with a large army to the coast of Oka. 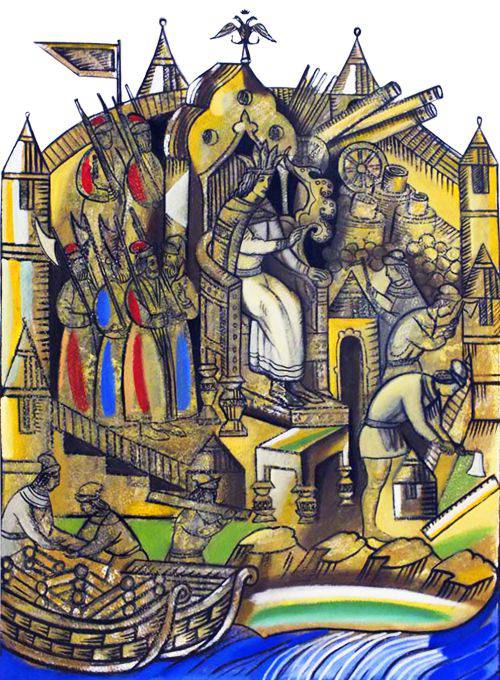 Construction Sviyazhsk. Miniature of the XVI century
At that time it was vague in Moscow. Grand Duchess Elena died in 1538 year. At the foot of the throne, occupied by a little boy, boyar rule reigned. The court parties snatched each other from the helm of power.

However, at that time our political elite — boyars, princes, families of large Moscow nobles — firmly held the fate of the country in its hands. Embarking on internecine quarrels, without putting the sovereign into anything, she nevertheless went out into the field with complete unanimity when it was necessary to repel the dangerous enemy from the gates of Russia. The Moscow state was ruled by a very proud and very ambitious, but also a very responsible elite. They were strong-willed people ...

The Russian guard sent intelligence information: the Crimean Khan himself came with his people, Prince Yimin, with the support of the Nogai, the Turkish detachment, with powerful artillery and hired arrows from pishchale. A big invasion like the new Batu rati was conceived! This information went through Zaraysk, that is, through Prince Mikulinsky, and caused a general gathering of all the armed forces of the Moscow State. In the capital, really alarmed for the southern boundary. But even with the fastest jump from Zaraysk to Moscow - a light from the outside, and then from Moscow to different cities ... And where will the Crimeans come from? Hastily covered different directions, from Pakhra to Vladimirshchina, and even Meshchary. In any case, preparing for a siege in the capital itself.

The advance detachment of the Crimeans hit the town of Osetr near Zaraysk. The local voivode Nazar Glebov unexpectedly attacked the Tatars with a part of the garrison and armed citizens when the enemy entered the urban suburbs. Having lost nine fighters as prisoners, the Crimean avant-garde rolled back ingloriously.
Soon Sahib-Giray came out with the whole Horde to the Oka opposite Rostislavl. He was opposed by the army of Prince Dmitry Belsky, based in Kolomna. The Russian regiments moved towards Rostislavl at the earliest, intending to protect the ferry from the Tatars. Garrisons of nearby fortresses were removed to assist the main forces. I went to the enemy and Mikulinsky with a small Zaraisk detachment.

The core of the Belsky military forces with a guarantee did not have time to occupy the Oka ferries to which Sahib-Girey headed. Although a small advanced regiment had time. And that means he had to tightly hold onto the ferries, beating the Tatars until reinforcements arrived. The regimental voivode Prince Ivan Pronsky-Turuntai knew what he would become a battle with an overwhelming enemy ...

Before the entire enemy bulk was one regiment, who had no chance to win. The people who stood in the way of the Crimeans prepared for death. Shortly before this terrible standing on the Oka, a letter came to the army on behalf of the king. It promised a "great salary" to those who protect the state from the alien Horde, as well as to the families of the victims; The governor was asked to stand firmly for Christianity, without having any hatred between them. When the content of the letter became known not only to the military leaders, but to the whole army, she replied: "We are ready, we have armed ourselves, we want to drink the death cup with the Tatars." Now it is time to fulfill what was said.

Tatars on horses, rafts and other means rushed to the Russian coast. Russian governors ordered to beat them with arrows. Dead bodies swam across the Oka ...

The second assault attempt was accompanied by food fire: the mercenaries, on the orders of the Khan, tried to knock down the regiment from their positions with lead hail. The Turkish gunners got up to the guns, and the cores flew into our soldiers. Crimeans again climbed into the water. The regiment stood as he could. One by one, the nobles fell from their horses. And without that, the small forces of the regiment were melting, melting, melting ... Fewer arrows fell on the heads of the Tatar assault detachments.
Finally, the long-suffering advanced regiment faltered. Our horsemen began to gradually move away from the coast, freeing space for the Tatars. And there would have been a breakthrough through the Oka ... but then the Zaraisk detachment of Mikulinsky arrived in time to help him. The Crimeans again suffered heavy losses, again fresh troops stood against them. The shootout resumed.

The first, most terrible onslaught of the enemy army was able to contain. Gradually, parts of a large regiment began to arrive, and the Russian commander-in-chief, Prince Dmitry Belsky, appeared along with the main forces. Tatars sailed to our coast were cut off with axes and sabers. Moscow artillery arrived, and soon the Turks with curses threw their broken guns. Russian arrows opened fire from pishchel, the wind carried thick smoke over the smooth surface of the river, the crackling of firing did not stop for a minute. And behind the backs in time, more and more new shelves were visible in the distance ...

The defeat of the Crimeans became obvious.

Offensive sentences rushed from the Russian coast: “Free up space! We will cross over and beat you! ”

Twilight put an end to the battle at the crossing. At night, “big outfit” - heavy artillery arrived at the Belsky camp. Upon learning of this, the Khan, with the main forces of the Horde, fled. The next morning his son left the Oka bank, and then the other leaders of the Tatar army. They fled to the saving south, "with great disgrace ... - according to the chronicler, - ... leaving the cannons and squeaking, and carts, and all sorts of military junk."
Few Crimeans blithely remained, dreaming of engaging in robbery of nearby volosts. Prince Mikulinsky fell upon them, destroying the last Tatar detachments at Oka.

The capital, and the whole of Russia celebrated a great victory. On behalf of the sovereign, the young voivode, who had been in the case, generously bestowed on fur coats, precious cups ...