November 21 2015
136
November 19 in Russia celebrates the Day of Rocket Forces and Artillery. It can be seen that it was not by chance that on November 12, the General Staff of the Russian Federation, President Vladimir Putin, was shown a slide with a plan of actions of the SAR armed forces in the village of Mkhin, which was on the Russia Today television program. The map indicates the location of the Russian artillery in Syria. 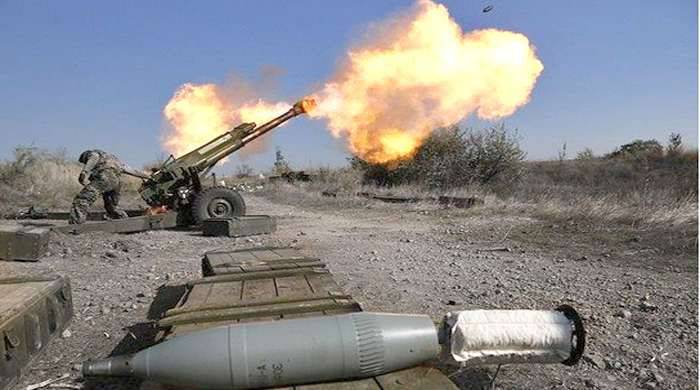 The map shows that the location of the six Msta-B howitzers of the 5 howitzer artillery 120 of the Guards Artillery Brigade, located in Jurga, Kemerovo Region, is located near the Hamrat village in Homs province, near the border with Lebanon. Judging by the designation, the gunners are in the specified area of ​​Syria from November 6.

Earlier in Syria, the Russian Msta-B howitzers, which were bombarding the positions of terrorists by the Syrian army, as well as heavy self-propelled TOS-1A Solneptek flamethrowers leading to the positions of militants in the mountains of northeastern Latakia, were spotted "in action" 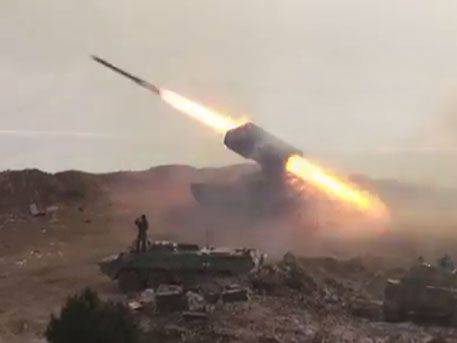 There is evidence that Russia in Syria uses four air bases for raids against militants - in addition to the Khmeimim airfield in Latakia, where the main forces are based aviation The Russian Federation, helicopter links were deployed to the Tiyas Syrian Air Force base, located in the desert between Homs and Palmyra, occupied by Islamic State fighters, as well as to bases in Hama and Sharyat near Homs.

Part of the land contingent was undoubtedly involved in the protection of the Khmeimim airfield in Latakia, as well as forward-based airfields - Tiyas between Homs and Palmyra, Sharyat near Homs and in Hama, where Mi-24 links were deployed.

Military experts predicted that in the conditions of the Syrian war, in addition to additional helicopter links, we could soon expect the transfer of long-range and rocket artillery with Russian personnel.

- Marine battalion of the 810-th separate brigade of marines;

- battalion of the 3 th brigade of GRU special forces;

In the absence of fire support it is very difficult to pass positions well prepared by engineers. The use of howitzers, as well as the MLRS, is almost the only effective way of capturing strongholds in fortified areas of militants. Yes, this is not officially mentioned, but, apparently, our gunners are working locally in Syria.

There is also information about the raids conducted by our marines, paratroopers and special forces - not too far from Latakia, where our planes are stationed. 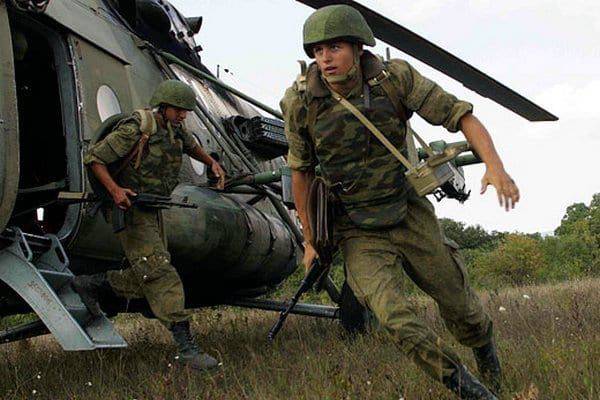 The fact is that the Syrian army was less prepared than many military experts had expected.

First, the Syrians have been fighting for the fifth year, and the rotation of troops is often carried out with great delay, despite the fact that the IRGC (Islamic Revolutionary Guard Corps, Iran) and Hezbollah units are actively involved in the conflict.

SecondlyRecently, the training period for servicemen in Syria is only a month and a half.

Thirdly, a significant part of the population simply shy away from participation in hostilities. Most of the government troops are Alawites, but there are not so many of them in Syria. The involvement of other ethno-religious groups is sometimes fraught with treachery. Militants do not only have a high level of training, but also receive constant support from their sponsors, which is expressed not only in supplies weapons and ammunition, but also manpower.

FourthlyOur limited involvement in hostilities is also due to the fact that under current conditions there is no time to prepare and train the Syrian army when the militants receive constant support from the outside.

And in order to break them, the troops of Bashar al-Assad need serious enough fire support directly on the ground. It is no secret that government armored vehicles are actively and densely fired at by militants from various anti-tank systems, including American BGM-71 Tow delivered by Saudis and Qatari. Therefore, lead the offensive alone tanks with such a density of fire is almost impossible.

The Syrian army is heavily depleted by a four-year war. As for weapons, the Syrians have a lot of it, but they have a rather old one.

The deployment of artillery units in Syria (first of all MLRS), in my opinion, is necessary.