Historical lawlessness: what has been pasted over the construction site 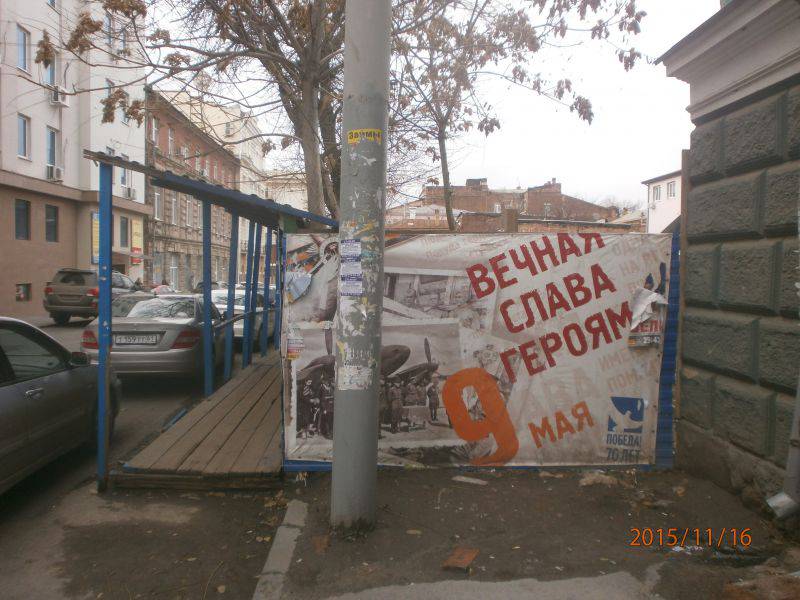 “The construction site was plastered with posters from the day of the celebration of 9 May,” said Alexander Pavlovich Stasyuk, deputy chairman of the Rostov city club of youth and veterans “Patriot” (created in 1993 year).

On one of the central avenues of the city of Rostov-on-Don in the area of ​​Temernitskaya Street, 47 (this street appeared around 1840-50 years), today's entrepreneurial construction businessmen decided to save on expenses and decided in this way to “ennoble” their next construction site. All this saw Alexander Pavlovich and was offended to the depths of the soul. And with him, and I.

On one of the oldest Rostov streets, where literally everything is saturated historythe story itself is being trampled.

Posters with the image of soldiers in some places are heavily torn, they are showered with autumn mud passing "cool" cars. The motto of one of the posters (“Eternal glory to the heroes”) next to the crumbling, shabby two-story house seems just blasphemous. On the right side of the poster and completely half torn off and lying in the mud. A number of modern vandals painted with English words a blue primitive fence, bent in several places.

On the posters with the image of Soviet soldiers, other businessmen have already pasted advertising posters announcing the arrival of one of the Moscow "ballets" in the provincial town.

- It turns out that managing the culture of the city, which is located almost next to this construction site, doesn’t matter before using Victory symbols, - says Alexander Pavlovich.

If we are talking about eternal memory, then it should be inherently eternal, and not just festive, once a year, when at 9 May everything is transformed.

But who thought of it to glue the construction site with festive posters, wanting to hide the ugly? Here is the big question. Near this object there are no signs indicating the name of the general contractor, the timing of work and the main thing: who does this work. No trace. Alexander Pavlovich went round this construction site, but found nothing. Then he went to the editorial office of the local newspaper “Rostov official”, but there he was told that they would not deal with this issue, because this problem is extremely difficult for their publication: local journalists cannot criticize the actions of local authorities. Therefore, Alexander Pavlovich called me and asked me to tell about this case: federal publications are not afraid of local authorities, who turn a blind eye to such things and do not react at all.

Alexander Pavlovich Stasyuk has sore legs, but he was not too lazy to walk a few kilometers in search of truth. He is persistent in his daily work. He believes that there should be order on the city streets. And order in terms of memory is the basis of spirituality. Proper spirituality. That's just with surprise, you can read an interview with the head of the city department of culture Lisitsyna about which perfume is closer to her heart and taste. Unfortunately, she didn’t smell that real, masculine, scorched with blood and then the spirit, the real Russian spirit, whose echoes are now being trampled on the city street. Unfortunately, many officials drive very good cars, equipped with flavors.

But there is both an eternal memory and the keepers of this memory. Such as Stasyuk. They cannot pass by historical lawlessness and pass by a faceless crowd. 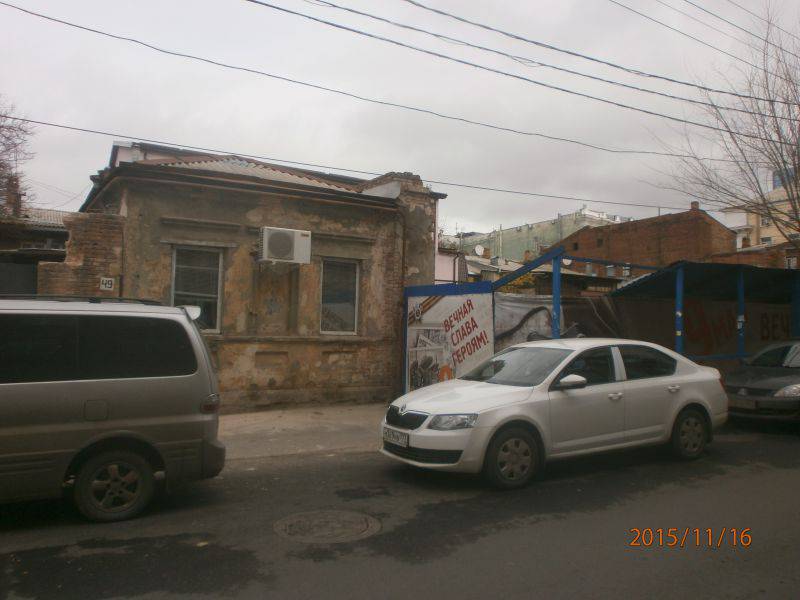 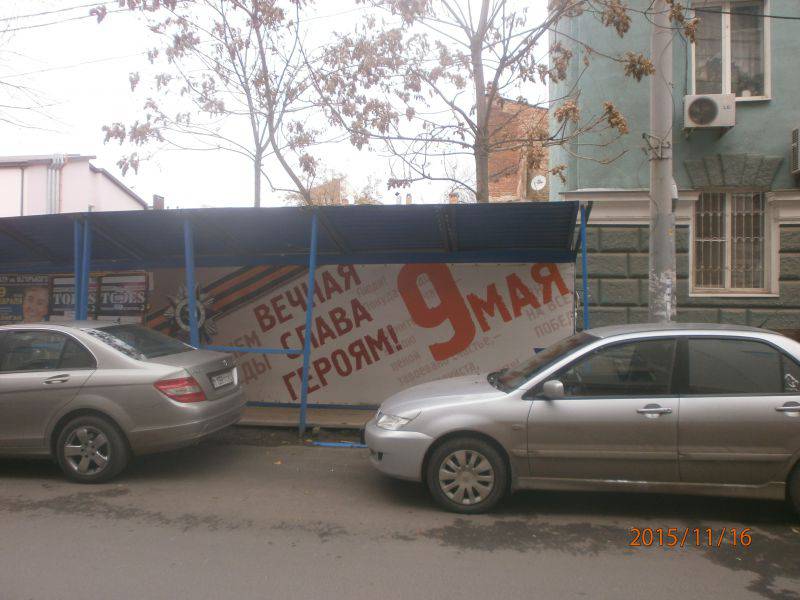 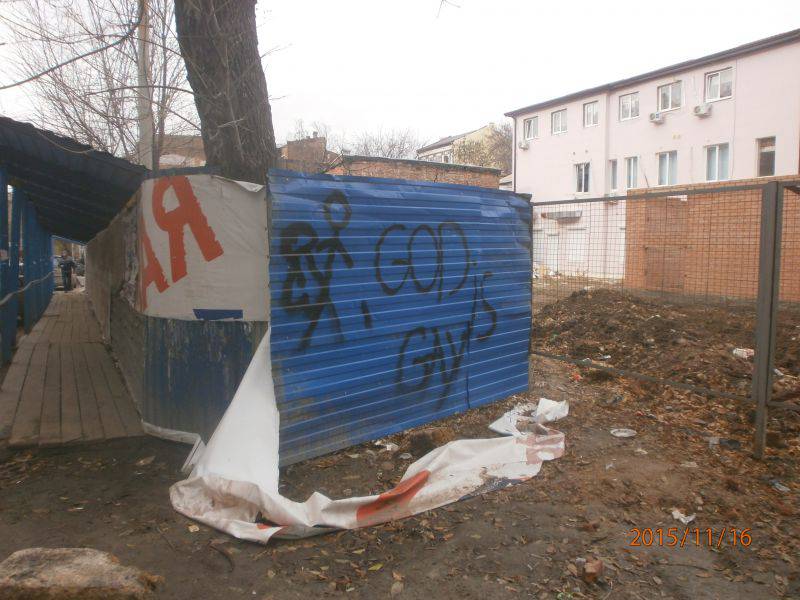 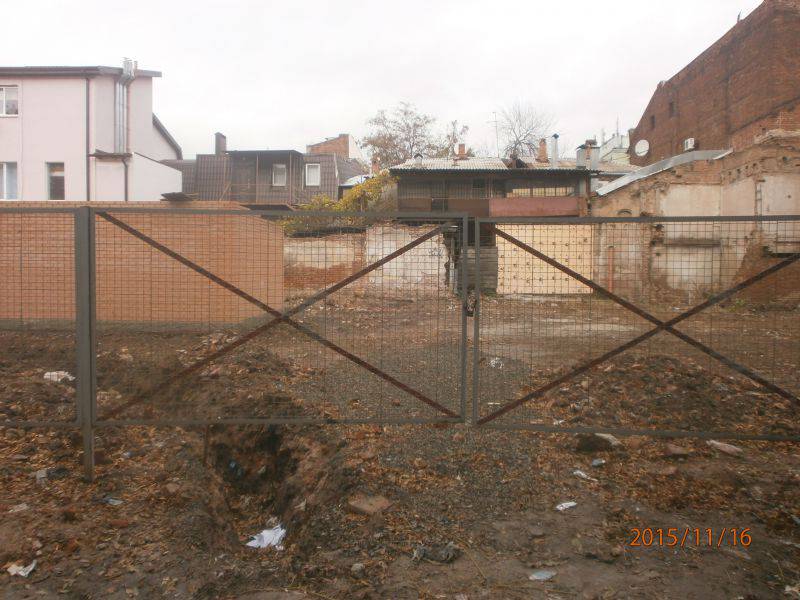 Ctrl Enter
Noticed oshЫbku Highlight text and press. Ctrl + Enter
We are
“But we could not do otherwise. We loved our homeland "Is there a solution to the problem of patriotic education of young people? Private initiatives
Military Reviewin Yandex News
Military Reviewin Google News
20 comments
Information
Dear reader, to leave comments on the publication, you must sign in.