The National Interest: beware of the supersonic Tu-160

November 20 2015
114
The first case of the combat use of strategic bombers Tu-95MS and Tu-160 became real news weeks and, quite expectedly, did not go unnoticed by foreign experts and the media. Both domestic and foreign publications point out the uniqueness of the recent operation and its importance for stories Russian Air Force. In addition, attempts are being made to understand the first results of the use of strategic bombers and to predict its possible impact on various processes in the future.


As an example of the reaction of the foreign press to the recent actions of the Air and Space Forces of Russia, consider the material of The Russian Air Force's Super Bomber: Beware the Supersonic Tu-160 (Russian Super Bomber: Beware of the supersonic Tu-160) of the American edition of The National Interest, published on November 18 . The author of this article, Dave Majumdar, recalled the history of the Russian "super-bomber", reviewed his current state, and also studied its strategic potential in the matter of solving combat missions.

At the beginning of his article, the author reminds his readers that the combat debut of the Russian strategic bomber Tu-160 had taken place the day before. Several planes of this type hit the objects of the terrorist organization Islamic State, which was banned in Russia and other countries. This operation and its “main character” are the subject of the article. 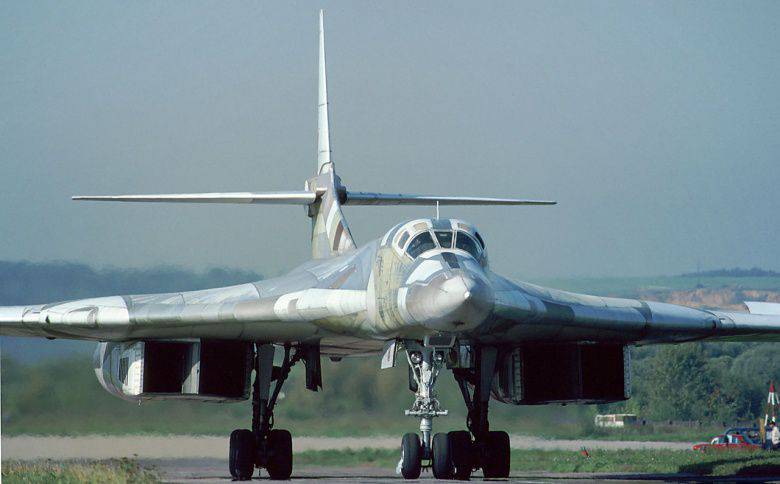 The aircraft Tu-160 in NATO was given the symbol Blackjack. In Russia, in turn, the unofficial nickname “The White Swan” is widely used. D. Majumdar notes that this nickname is associated with some features of the aircraft: they have a characteristic white "anti-nuclear" color and a thin silhouette. Tu-160 was the last strategic missile carrier, created in the Soviet Union before its collapse. The initial task of these aircraft was to “turn the cold war into a hot one” - the delivery of nuclear ammunition to targets in the United States. In the future, Russian specialists refined this aircraft and made it possible to use non-nuclear weapons. According to the author, the Tu-160 is a kind of response to the last American strategic bomber during the Cold War - the subtle B-2.

According to the company Tupolev, the development of the project of a promising "super bomber" started in the early seventies, i.e. shortly before the start of work on the project B-2. The sketch project was prepared by the middle of the same decade, and the first flight took place on December 18 1981. The prototype of the new aircraft was controlled by the crew of the test pilot BI Veremea

Flight tests of the first production aircraft of the new model began in October 1984 of the year. After some time, this car was handed over to the air force. The Blackjack service in the military began in April 1987, when the first of the serial aircraft was transferred to the 184 Guards Heavy Bomb Aviation Regiment, which served in Priluki (now Ukraine). This compound in a few years received a new type of 19 aircraft, whereas a total of 35 machines were built. After the collapse of the USSR, the aircraft of the 184 regiment remained independent to Ukraine.

D. Majumdar recalls that eight "Ukrainian" aircraft in the late nineties were transferred to Russia, so that the Russian Aerospace Forces currently have 16 Tu-160. The remaining aircraft in Ukraine were disposed of. The same bombers, who managed to change the owner and survive, are being upgraded. During repairs, they receive new avionics and the possibility of using new types of weapons.

Not so long ago, Russia announced its desire to resume the mass production of its "super bombers". According to The National Interest, production will be conducted at the Kazan Aviation Plant from 2023. It is planned to build at least fifty new aircraft. In addition, simultaneously with the construction of the new Tu-160, the development of the PAK DA project will continue, the goal of which is to create an entirely new strategic bomber. Here D. Majumdar asks one of her favorite questions: how is Russia going to pay for new airplanes, even if their production is planned for a fairly distant future. In this context, the author refers to the statements of the Deputy Minister of Defense of Russia, Yuri Borisov. Previously, he argued that the construction of a new version of the Tu-160 aircraft would begin in the 2023 year. The deadlines for the implementation of the PAK DA project will be shifted to ensure the implementation of all existing plans.

The new version of the aircraft "Blackjack" should receive the designation Tu-160М2. Probably, the glider of this bomber will be fully borrowed from the base project. In this case, there is information about the intention to use new engines and modern radio-electronic equipment. A few months ago, Rossiyskaya Gazeta published an interview with one of the leaders of the Concern "Radioelectronic Technologies". In July, Vladimir Mikheev said that only the platform itself would remain in the new project from the base project. It will be installed only new avionics with enhanced performance.

The newest US strategic bomber, the B-2, relies on its stealth when carrying out its tasks. In the case of the Tu-160, the successful accomplishment of the task is ensured by the possibility of movement at high speed, as well as by the presence of long-range cruise missiles that must deliver warheads to the specified targets. The Tu-160 has four dual-circuit turbojet engines with an afterburner of the type NK-32 with a maximum thrust of 55 thousand pounds (25 thousand kgf). This power plant allows you to reach speeds of the order of M = 2,05, but in practice it is recommended to reach speeds of no more than one and a half speeds of sound. Such requirements are associated with reducing the load on the airframe and saving the resource.

The essence of the concept of using “Blackjacks” is that the aircraft must go to the launch area as soon as possible, and then launch the cruise missiles before the conditional opponent has time to react to it. Commenting on similar methods of combat use, D. Majumdar refers to his acquaintances from the air and naval forces of the United States. According to them, intercepting a high-altitude air target flying at a speed of about M = 2 is an extremely difficult task, even for modern and highly efficient fighters such as the F-15C.

The armament of the missile carrier Tu-160 is placed on two drum launchers placed inside the fuselage. Each such installation has mounts for six cruise missiles. The main armament of these aircraft is the X-55 cruise missile, which can fly a distance of 1600 miles (2500 km) and deliver a nuclear warhead to the target. In addition, there is an improved version of this missile called X-555, the main difference of which is the use of a conventional warhead. The National Interest author notes that these missiles will be replaced in the future with new weaponswhich was created in recent years.

In the official video of the Russian Ministry of Defense, demonstrating the use of "super-bomber" in Syria, a new cruise missile was shown. The attack on the targets of the terrorists was carried out using the latest X-101 cruise missiles. Among other things, according to D. Majumdar, this means that the nuclear version of the missile, known as X-102, has been adopted. The appearance and the start of exploitation of such weapons allows Blackjack to maintain its status as an extremely dangerous enemy.

The author recalls the uniquely high performance of the Russian aircraft. The Tu-160 carries on the internal suspension an enormous payload weighing up to 88 thousand pounds (40 t). For comparison, the F-15E fighter fully loaded and loaded weighs about the same. The maximum take-off weight of the Tu-160 reaches 606 thousand pounds (275 t). Thanks to this, the bomber retains the title of the heaviest combat aircraft currently in service.

It is noted that the Tu-160 can be considered a response to the American B-2. In this case, however, two aircraft differ in methods of application. B-2, using its stealth, must break through the enemy's air defense and strike at key targets. Tu-160, in turn, is the carrier of cruise missiles and the “launch platform”, which should not overcome air defense. Thus, the aircraft can not be considered direct analogues.

D. Majumdar completes his article with an interesting conclusion and comparison of two aircraft, as well as two combat use concepts. He notes that stealth planes are extremely expensive, but can use relatively cheap ammunition. Platforms like the Tu-160 differ from low-profile aircraft at a lower cost, but are intended for the use of more complex and expensive ammunition. Both of these concepts, despite significant differences, can ensure the effective delivery of warheads to the intended targets. The author expresses the hope that humanity will never have to compare in practice which of these concepts is better.

From the very beginning of his article, D. Majumdar has been trying to compare the Russian Tu-160 bomber and the American B-2, which raises some questions. These aircraft were never considered analogs and have too many differences to be considered similar. However, the author later explains his thought. At the end of the article, he compares the methods of application and the concepts themselves that underlie the two projects. As a result, this idea boils down to the “confrontation” of two systems: “expensive aircraft, inexpensive weapons” and “inexpensive aircraft, expensive weapons”. For obvious reasons, the author cannot assert which of these systems is better, and also does not want this to become clear in practice, in the course of an armed conflict.

Such a comparison of two strategic bombers created at the end of the Cold War is the most interesting point of the whole article. In addition, it can be noted that at the end of the article, talking about record-breaking characteristics, the author almost admires the Russian aircraft, including indicating the “enormous” payload and comparing it with a mass of American fighters. Nevertheless, he, as always, tries to maintain objectivity.

One of the main conclusions of the article The Russian Air Force's Super Bomber: Beware the Supersonic Tu-160 is that, despite the differences from other aircraft of its class. The Russian “super-bomber” Tu-160 still remains a dangerous opponent for the enemies of Russia. He is able to quickly reach the launch line and "unload" 12 cruise missiles with nuclear or conventional warheads. The arsenal of a bomber has recently been replenished with new missiles, which allows it to maintain and increase its strike potential, as well as to confirm the status of a dangerous enemy that should be feared.