Who are you, American "Anat Kam"? 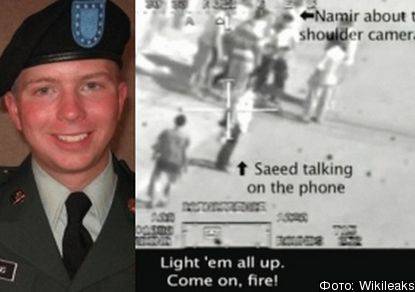 22-year-old Bradley Manning, suspected of handing over Pentagon’s secret documents to the Wikileaks 92.000 site, is the US version of Israeli Anat Kam, who has been brought to trial on charges of a similar crime.


The British newspaper The Telegraph has published details regarding the main character of the scandal that broke out in the United States around the publicity of the secrets of the Afghan war.

In particular, it is reported that several days before the transfer of files to the chief editor of Wikileaks, Manning, who served in the analytical department of intelligence of the American army, he raged on his page on the social networking site Facebook. The young soldier in all ways reproached his employers from the army and was indignant about the "society as a whole."

Manning rewrote the secret documents on the discs that Lady Gaga has signed.

He publishes a newspaper and the details of Manning’s biography: he was born in the United States and graduated from school in Wales, England. The first shock in his life was a break with his lover, plunging the young man into the deepest depression. In those days, he wrote on the Internet that he was "disappointed" and "there was nothing left."

While serving in the army, he wrote about himself the following: "Bradley Manning is not a piece of equipment," and he led a joke about "military intelligence."

Now 22-year-old Manning is awaiting the decision of the military court. He is suspected of disclosing more than 90 thousands of secret military documents on the Wikileaks website. According to US officials, their publicity endangers the lives of not only American soldiers stationed in Afghanistan, but also Afghan informants collaborating with the US Army. In an exclusive message, Channel 4 News confirmed this: the Taliban distributed to Afghans a warning that local residents, whose surnames appear in declassified documents on Wikileaks as collaborators, "will be caught and punished."

The left radicals believe that it is high time it was time to announce specific data about the deaths of civilians in the Afghan war, and the Manning family, who lives in Pembrokeshire, said that "he did the right thing."

The Pentagon, which is investigating the source of the leak, is expected to check if there were disturbing alarms there when Menning filed a request for mobilization into the US Army (a similar investigation, we recall, was carried out after revealing Anat Kam and in the Central District she got access to documents classified as "Secret"). An analysis of Manning's records on the Internet and, in particular, on his Facebook page, is also likely to be part of the investigation.

Manning, an open-minded homosexual, posted his first grim 12 recording of January of this year: "Bradley Manning did not want this fight. Too much loss, too fast."

In early May, when he served at the American military base near Baghdad, he placed a new revelation: "Bradley Manning was left with the feeling that nothing was left."

Five days later, he wrote that he "blushed" after "the lesson the ex-boyfriend gave," adding that he was "not a piece of equipment" and "disappointed with people and society as a whole."

The slogan on Manning’s personal page reads: “Accept me for who I am, or face the consequences!”

Bradley Manning was arrested in late May on suspicion of disclosing a file containing a video of a US helicopter attack in Afghanistan, and quickly became the main suspect when tens of thousands of secret documents concerning the Afghan war leaked onto the Internet earlier this week.

According to Kevin Fox, Uncle Manning, the arrest of his son had a severe effect on his mother Susan, who lives in Haverfordwest.

Another close relative, who asked not to be named, said: "His mother did not know anything about what he was doing, she was in terrible shock, she was very upset."

56-year-old Susan Manning moved to the United States in 1979 after she married an American from Oklahoma born Brian Manning, Bradley's father. He also served in the army and lived in Haverfordwest not far from Caudor base.

In 2001, the couple divorced, Susan Manning returned with her son to Wales, where he graduated from school.

James Kirkpatrick, who became friends with Manning on the basis of a general interest in computers, said: “The last time I contacted him was about six months ago. He did not say anything about what was happening, but at the same time he seemed a little secretive, he was a bit paranoid about what we talked about on the net. "

The photos posted by Manning on Facebook have perpetuated not only his school trips while studying in Wales, but also participating in a demonstration of homosexuals. In the picture, Manning is holding a poster demanding that gay men be equal on the battlefield.

In the American prison, Manning is observed 24 hours a day, as he is prone to suicide. On July 29, he was transferred from a military prison in Kuwait to a prison in Washington. The Pentagon asked the FBI for help in investigating the source of the leak.

The General Staff of the US Army is seriously concerned about the leakage of secret documents in which the names of the Afghan informants of the American Army are named.

Ctrl Enter
Noticed a mistake Highlight text and press. Ctrl + Enter
We are
The CIA launches a special group to assess the impact on the United States of leaks 'WikiLeaks' ('The Washington Post', USA)Exposing Wikileaks: expert opinions
Add a comment
Information
Dear reader, to leave comments on the publication, you must to register.