Bury in one night!

November 25 2015
12
Not so long ago on the pages of VO read the material "Reburied in one night"And immediately remembered: in fact, I am almost a witness of a very interesting historical event, which, of course, everyone seems to know today, but ... it looks much more interesting in details and in faces. We are talking about the widespread demolition of monuments to Stalin, carried out by decision of the Central Committee of the CPSU ... "in one night," and throughout the USSR. This operation was carried out in 1956, when I was two years old, and it’s clear that I couldn’t find out about it myself, but I was lucky to work with a person who carried out one of these demolitions personally and he had all this history and told. 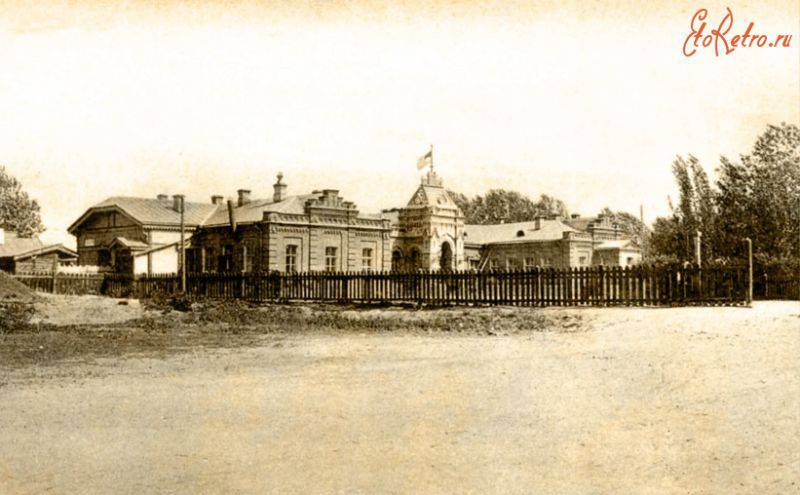 The building of the station Penza-3. The photo is still pre-revolutionary time, but now it has not changed.

And it happened so that in 1983, when I was already working at the Penza Polytechnic Institute, Reva Vladimir Efimovich, Candidate of Historical Sciences, had previously come to work for us, who had previously held responsible posts in the Zheleznodorozhny RK KPSS. This district in our city was the most populous and industrial. And there are two important railways intersecting in it, so four Penza-1,2,3,4 stations were located here at once. That is, there was a responsibility above the head, that, apparently, he was tired. And then ... and calmer, and there is something to tell from experience. Then he became head of the department of CPSU history, and in 1995, after all the known changes, he decided to open the department of “public relations” at the place of the then existing department of national history and culturology. I decided and ... opened it, and according to the documents we were the second in Russia !!! After the famous MGIMO - they were the first!

It is clear that we immediately attended to travel around the regional towns, open training centers for our specialty there, that is, prepare talented young people in advance and tidy up their hands. One such school of "young PR" was located in the district center Serdobsk, where it was necessary to go for two hours by train, and which departed from Penza-3 station.

And now I must say that the main station of the city, Penza-1, had an old, beautiful railway station, which was demolished and replaced with modern, but the station building on Penza-3 did not demolish it, and it has survived to the present day. And it is remarkable by the fact that it was the headquarters of the White Czechs, when 25 of May 1918 of the year they raised their rebellion in Penza and it was from here, through the Penza and Sura rivers, that they stormed the central part of the city. 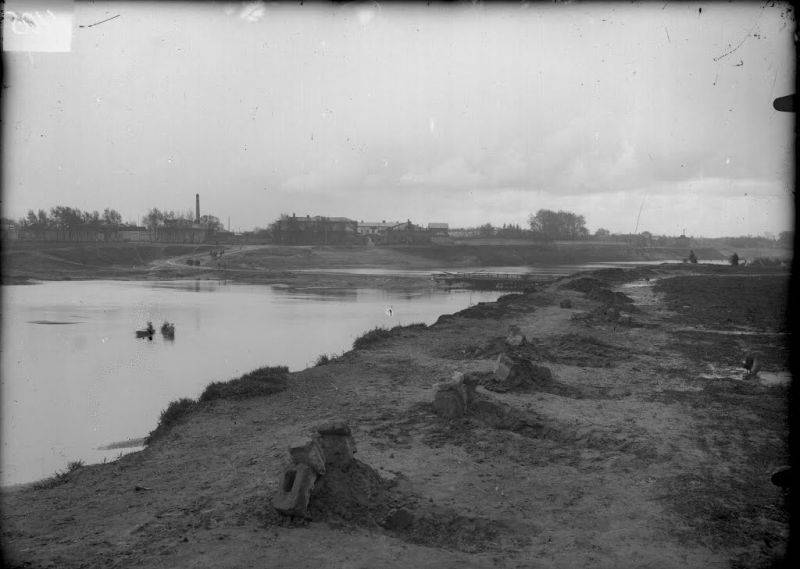 Shooting cells of White Czechs opposite the central part of the city of Penza. Just behind them is the Penza-3 train station.

Often I had to travel to Serdobsk with Reva, and we talked about various interesting topics. And once pulled him to the memories, and he told me the following story.

In the 1956 year, when he was already one of the secretaries of the RK VLKSM of the Zheleznodorozhny district, he was, as always, urgently called to the Regional Committee of the CPSU and was told: you need to “bury” Stalin’s bust in one night, which stands at Penza-3 station.

For some reason, this bust was not on the platform, as one would expect, but on the platform facing the trains and seemed to be taking them on their way out of the station. Moreover, it was necessary to arrange everything so that no trace of this matter would remain, and no one would know anything! And someone else does not believe when I write that our party did not trust its own people and was afraid of them. She didn’t trust her and how she was afraid! Even the text of Khrushchev’s report at the XX Congress of the CPSU was not entirely printed in the newspapers! In the West, he appeared in two days, and for the Communists we confined ourselves to a “closed letter” and a retelling of his speech in Pravda.

Penza. View of the elevated historical part of the city from the bridge over Sura. The green massif on the right: the island of Sands, and behind it the station Penza-3 is located.

It is clear that Reva immediately took a visor: “the party ordered, the Komsomol answered — there is!”, But legitimately inquired how to ensure the secret, then? He was explained, given, so to speak, "powers", and the work began to boil. Only the most trusted Komsomol members, the 5-6 man, could no longer be brought down to the demolition of the monument, and finish everything by morning, that is, by the arrival of the morning train at 5,30 Moscow time. “The monument is plaster and fragile, so you can quickly cope with it! - explained to him in the regional committee.

When the “guys”, armed with crowbars, arrived at the work site around 10 at night, everything was ready there. The police cordoned off both passages to the platform, and the doors of the station building were locked. A freight train was put on the first path and, although the trains went continuously through the station, no one saw anything behind its carriages.

Well, the guys got to work. While some were crushing the pedestal, others behind the water tower behind the station building were digging a hole for the burial of the remains. To no visible traces left! And I must say that the first part of the operation went off without a hitch, without a hitch, the base under the bust and the bust itself were cut in two pieces and buried in the hole behind the tower. But then went unforeseen difficulties.

Probably, someone still found these monuments of the Soviet era - the park sculpture “a girl with an oar”, “a pioneer with a mountain”, “a border guard with a dog” painted with “silver paint”, and who didn’t find them - watch a funny movie “Welcome or no one is allowed! ”There are many such sculptures there. They, like the busts of “Comrade Stalin” at that time, were cast out of plaster, so it was not a big deal to cope with the monument of labor. But it turned out that at its base four iron rods of decent thickness were embedded in concrete (!), And this bust was held on them. What to do?

Reva rushed to call the duty officer in the district committee. And how to call if the night and all around is closed? There are few “payphones”, they stand only in the center, and at the station one, as always, the tube is cut off. Moreover, even the police then had no mobile communication. I had to run a run through the night city and personally report about the problem. We decided quickly: gave him a hacksaw and said - "Cut"! “And if we break the canvas?” “We saw, and we will bring back the spare ones!” And they brought!

And in the place of the ill-fated monument, meanwhile, work was in full swing: the guys sawed reinforcement rods, changing every five minutes! It was necessary to cut in the pit below the level of asphalt, and it was good for the good of the cause. But the work is very difficult, because they had to cut at the root. Meanwhile, the dawn had already begun to rise above the horizon. Time was running out swiftly, the secret threatened to “surface.” The second secretary of the Communist Party Central Committee, who arrived at the scene, nervously glanced at his watch - “Time!” The chief of the police patrol also looked at his watch, and it was obvious that he did not like this whole undertaking. The boys poured sweat and sawed, sawed, sawed. This is now a "Bulgarian" and - r-aa-z and the matter is ready! And then, then sawed by hand!

“Saw, Shura, they are golden!” - probably each of them remembered this phrase “from Bender” more than once that night. And at the same time, as it is not hard, but it is impossible to quit. In an instant you will fly out of the Komsomol and ... “career goodbye!”

But ... it was not hard, but they did it! All four “fixtures” were sawed off, they immediately brought asphalt, they closed everything, rolled it up with a hand roller, and already at 5 in the morning this “job” was thus completed. True, a black asphalt blotch was visible, but here it was already quite simple: they brought a bucket of dust from the heap (and the wipers were scribing such heaps all the time and they came up here and there), covered them with fresh asphalt and rubbed them all! 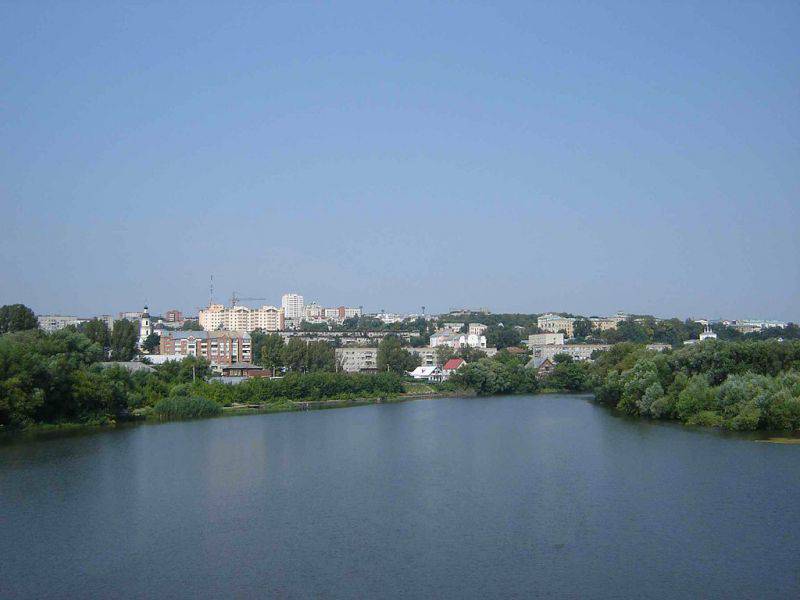 View of the modern part of the city from the bridge. The right green massif is the island of Sands, and behind it, even to the right, Penza-3 is located.

The freight train was immediately removed, and the guys were so tired that they sat down on a bench to rest, right there on the platform. And here comes a certain grandmother with a can of milk for sale and sees: there is no bust! He sees the guys, utterly tired and asks: "Aaa, where is the ... bust?"

“And never was, grandmother!” - the guys answered her, after which they got up and went home - to wash, and then again to work in the district committee. Nobody gave otgolov then for such cases. Yes, they did not ask them. Young were healthy. The other thing on their mind was different ...

Ctrl Enter
Noticed oshЫbku Highlight text and press. Ctrl + Enter
We are
Father toldThe hunt for the Blackbird
12 comments
Information
Dear reader, to leave comments on the publication, you must to register.