Poroshenko removes the "language of the occupier" from Ukrainian passports

November 19 2015
94
President of Ukraine Poroshenko responded to one of the petitions published on the presidential website. The petition, created by a certain Mr. Nadezhkin, concerns the “need” to remove the text in Russian from the Ukrainian passport. AT petitionswhich gained more than 25 thousands of support votes, it is said that there should be no place in the Ukrainian passport for the “language of the occupier”.


Poroshenko decided that such a petition could not be left unanswered, and as a response to Mr. Nadezhkin’s “appeal” he published the following:

I support the indignation of the citizens of Ukraine regarding duplication in the passport of a citizen of Ukraine of printed information in the language of the state, the Verkhovna Rada of Ukraine, recognized as carrying out aggression against Ukraine.

Taking into account the patriotic position of the signatories, as well as the desire of Ukrainian society to integrate into the European Union, I consider it necessary to duplicate printed information in the passport of a citizen of Ukraine in Russian to replace with English as the language of international communication.
Considering what I have stated, the appeal is sent to the Cabinet of Ministers of Ukraine with a proposal to ensure, in accordance with the competence, to make legislative changes to take appropriate measures. 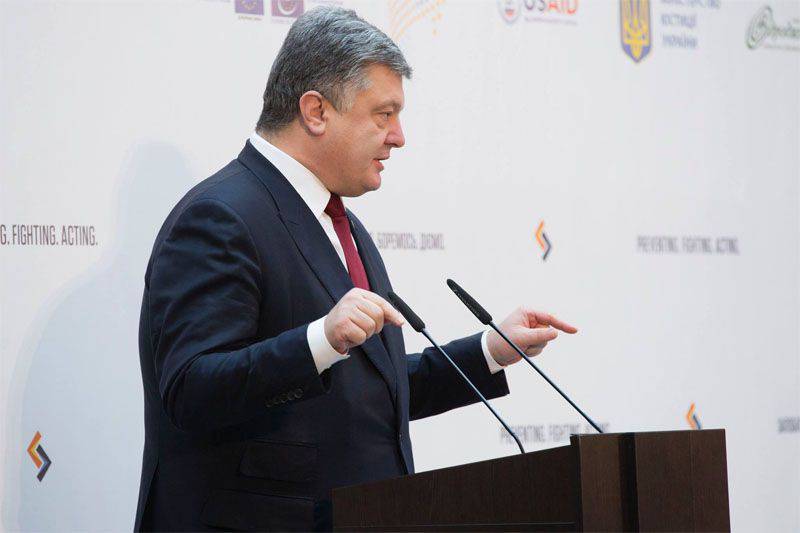 In other words, in the near future in Ukraine there will probably be new passports, using languages ​​that millions of citizens do not understand. According to sociological studies in Ukraine, about 70% of citizens speak the Ukrainian language, and English, as they say, no more than 12% of the population understands without a dictionary. At the same time, about 92% of respondents in different regions of Ukraine answered that they understand and can speak in Russian.

Meanwhile, Poroshenko was noted and another action. He expressed his concern about the fact that the West, declaring the need to coordinate the fight against terrorism, may forget "about Russia's aggression against Ukraine."

RT cites a statement by the ukropresident, who is worried about the apparent convergence of the positions of some Western countries and the Russian Federation (translation of Poroshenko’s interview Sky TG24):

Without a doubt, all countries should coordinate with each other in their efforts in this fight against terrorism. However, do not mix the attacks and the situation in Syria. All this only increases the number of Syrian refugees, which creates a serious problem in Europe.

Actions must be coordinated, but we must also understand that Russia is the aggressor, Russia annexed the Crimea, although no international law gave it such a right. And it happened in the 21st century in the center of Europe. On the territory of my country there are thousands of Russian military who are attacking our country, killing civilians, Ukrainian soldiers.

And we protect our country from this aggression. And most of all at this moment we need unity and solidarity from the EU and the whole world, a demonstration that the world is with us, that Russia must withdraw its troops from the Ukrainian land and return the Crimea.

If Russia "must return the Crimea and withdraw its troops," then Poroshenko must either be more careful about the words being expressed, or at least have a snack ...

Ctrl Enter
Noticed oshЫbku Highlight text and press. Ctrl + Enter
We are
The petition to stop the power supply of the Crimea in Ukraine gained more than 26 thousand votes
Military Reviewin Yandex News
Military Reviewin Google News
94 comments
Information
Dear reader, to leave comments on the publication, you must to register.