November 20 2015
54
Pentagon spokesman Col. Steve Warren during a broadcast on the US Department of Defense website reported that combat pilots in Syria have “few targets.” And judging by the above, even the “few” pilots do not always see. "We attack them where we see," said Warren. American media say that pilots find it difficult to get permission to open fire: the command would fear civilian casualties. 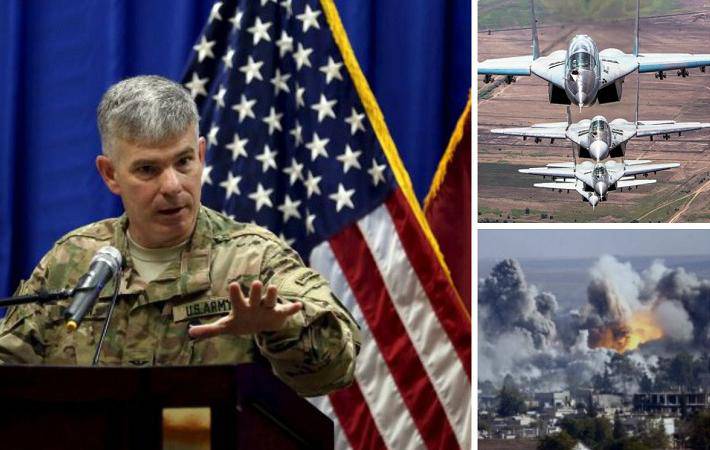 Six months ago, 26 May 2015, a newspaper "The New York Times" wrote that it was difficult for American military pilots to get permission from the commanders to open fire: there could be civilian casualties.

In a report from Istanbul, the correspondent writes about "increasing pressure" on the "Islamic state" undertaken by the United States, whose planes "first attacked hundreds of trucks" used by the "Islamic state" "to smuggle crude oil produced in Syria." It is estimated that 116 trucks from 295 were destroyed as a result of air strikes near Deir al-Zour in eastern Syria. Air strikes struck four A-10 attack aircraft and two AC-130 support aircraft.

However, the pilots later did not strike a thousand trucks with tanks used by the same militants to transport oil, because the risk of civilian casualties was high.

And here is the result: a newspaper correspondent notes that, at the moment, the oil logistics of the “Islamic State” has remained “basically unchanged.”

Washington's concern for civilians looks somewhat unusual. Quite a few civilians are killed by the Pentagon in Iraq, Afghanistan and Libya, as well as in Pakistan and other countries, where drones fly without any demand from local governments. And as it comes to the "Islamic state" and its infrastructure, immediately appears ostentatious humanism.

Pentagon spokesman Col. Steve Warren told reporters on November 18 that when inflicting recent air strikes on tank trucks of the Islamic State, pilots use what is called driver scare tactics. This is done in order to avoid casualties in the destruction of fuel trucks.

“To reduce the risk to civilians, we scattered flyers and gave a demonstration of force. We sent airplanes that flew over trucks at low altitude ", - quotes Warren RIA News".

The military official then showed the journalists a leaflet depicting people fleeing from tank trucks. The Arabic caption for the leaflet reads: “Get out of the trucks and run away.”

Warren explained that such flyers were scattered about 45 minutes before the air strikes.

In the context of the low effectiveness of the antiterrorist campaign in Syria, the US military is not talking only about "humanism."

The Pentagon also voiced another reason why the intensity of the airstrikes of the US Air Force on militant positions decreased, writes "Lenta.ru".

“We attack them where we see.” There were a few more accessible targets in Iraq, ”said the same Warren at the briefing. “The extremely important military operations are carried out in Iraq: it is there that the most of our air forces are concentrated,” the military concluded.

As reported on the evening of November 18 Interfax, the air group VKS of Russia for a few days destroyed about 500 fuel tank trucks transporting oil from Syria for processing to Iraq. This was announced by the head of the Main Operations Directorate of the General Staff of the Russian Armed Forces, Colonel-General Andrei Kartapolov.

“In recent years, ISIS and other extremist groups have established the work of the so-called oil pipeline on wheels in the territory under its control,” said Kartopolov.

According to the chief of the Main Operations Directorate of the General Staff of the Russian Armed Forces, hundreds of fuel trucks deliver oil for refining to Iraq. Russian airstrikes reduce terrorists' ability to illegally export energy: “Only in the first few days aviation destroyed about 500 fuel trucks. This significantly reduced the ability of the militants to illegally export energy and, accordingly, their income from oil smuggling. "

Recall that smuggling oil trading is one of the ways to finance the activities of a terrorist group. According to American experts, the Islamic State earns monthly on “exports” from 40 to 50 million dollars. Militants sell oil at a dumping price - from 10 to 35 dollars per barrel. Smuggled oil is supplied by militants to a number of states in the region, including Turkey. The latter is NATO and is an ally of the United States.

As reported back in October last year, the portal "Vesti.Ekonomika", eleven oil fields in Iraq and Syria made the IG largely an “independent financial machine”.

The militants-controlled fields give 25-40 every day to thousands of barrels with an estimated value of about 1,2 million dollars. The extracted oil is smuggled into Iran, Kurdistan, Turkey and Syria. And this is without taking into account revenues from deposits in the depths of Syria: they bring IG more 3 million per day.

Crude oil is transported by tankers to Jordan via Anbar province, to Iran via Kurdistan, and to Turkey through Mosul. It also enters the Syrian market and Iraqi Kurdistan, where it is processed. Turkey, experts say, closes his eyes to this. And she will continue to do this until the states of the West put pressure on her.

It seems that the only “pressure” of the West on Turkey, we can add, is the “humane” destruction of 116 trucks by the Americans. Curious and statements by the representative of the Pentagon that the American pilots "little" see.

Alexander Khramchikhin, deputy director of the Institute for Political and Military Analysis, says for good reason that “all the current convulsions of the United States and its allies, expressed in the formation of coalition and air strikes on the“ caliphate ”capital, are just consequences of Russian intervention, to which one must somehow react show that they are actually fighting terrorism. ” In an interview "Free Press" the expert explained: “Although in reality no one was going to fight with him in the West, especially Turkey, which is completely seated on the oil of the“ caliphate ”.

What kind of "coalition" led by the United States in this case can be said? What kind of fight against terrorism?

Observed and commented on Oleg Chuvakin
- especially for topwar.ru
Ctrl Enter
Noticed oshЫbku Highlight text and press. Ctrl + Enter
We are
Results of the week. “Mom, mom, what will I do? Koo! "Syria: Americans scare themselves, and Asma Asad buys chairs
Military Reviewin Yandex News
Military Reviewin Google News
54 comments
Information
Dear reader, to leave comments on the publication, you must sign in.