November 24 marks the 285 anniversary of the birth of A.V. Suvorov. According to the results of the nationwide vote "The Name of Victory", held last year, Alexander Vasilyevich was recognized as the commander who made the greatest contribution to Russia's military glory.

Count Rymniksky, Prince of Italica, generalissimo, holder of almost all Russian and many foreign orders. The merits of Suvorov were indisputable. And all of them can be described in one phrase: “I didn’t lose a single battle, all of which were won with the enemy’s numerical superiority”. No, probably, the Russian, who would have responded unfairly about Alexander Vasilyevich. Although, due to the activation of the anti-Russian propaganda machine, several stuffing appeared in our media discrediting the glorious name. 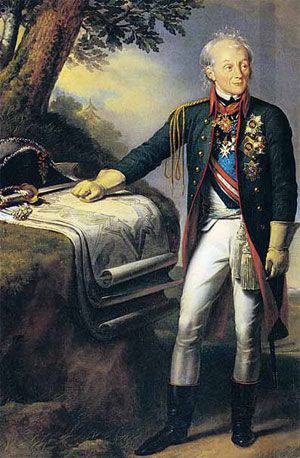 In fact, the attacks began at the time when Suvorov, thanks to his military talent, became widely known outside the homeland. The French who had a grudge succeeded in this, of course. The neutral British and even Austrians with the Germans, who seemed to be considered our allies, did not lag behind.

Russian philosopher Ivan Ilyin, forced to live for a long time abroad, having studied the phenomenon of Russophobia in Europe, wrote: “None of us took into account the extent to which Western public opinion is opposed to Russia and against the Orthodox Church: Western nations fear our number, our space, our unity, our spiritual and spiritual structure and for complacency inspire us that the Russian people are barbarous, stupid, accustomed to slavery, lawlessness and cruelty. ”

In 1800, one of the first books about the commander was published in Paris and Amsterdam, which said that “Suvorov was just a funny jester, if he had not shown himself to be the most warlike barbarian. This is a monster that encloses the soul of a dog and a flayer in the body of a monkey. Attila, his compatriot and probably ancestor, was neither so fortunate nor so cruel. “Inherent ferocity, which takes the place of courage, is inherent in him: he pours blood by instinct, like a tiger.” Hatred of Suvorov got along with incompetence and absolute historical illiteracy. The main motivators of the vilifiers, of course, were elementary envy and fear. As the writer Arseniy Zamostyanov, who studied this topic, correctly writes, “in London and Paris they began to speculate about an eccentric elderly Russian general whose victories were too bright for Europeans to cast a shadow over them.”

Austrians most often blamed Suvorov for not fighting according to the rules, contrary to the canons of strategy and tactics, and his victories were attributed to chance, fortune, a happy coincidence, to which Alexander Vasilyevich objected: “Once - happiness, twice - happiness, mercy the God! Someday, a little bit of skill! ”

But most often they accused Suvorov of extreme cruelty. Especially the Poles. They recalled his excessive, in their opinion, victims of suppressing the 1794 uprising of the year. However, Suvorov acted adequately in a combat situation, and if the suburbs of Warsaw were shot from almost all residential buildings in his soldiers, he only responded with the forces and means at his disposal. And immediately stopped the fight, when the enemy began to surrender, throwing white flags. Known and his harsh order-reminder to his soldiers: “The winner is decent generosity. With prisoners to act humanely, ashamed of barbarism. Give in the mercy: it is a sin to kill in vain. They are the same people. Not to offend the average man: he feeds us and feeds. ”

Suvorov, in contrast to the same Germans who were in the Russian service, showed respect for local customs and legal authorities, stopped cases of looting. Here is what the new commandant of Warsaw Josef Orlovsky, Kostiushko, appointed by Suvorov, wrote: “You can be comforted by the generosity and moderation of the winners in relation to the vanquished. If they always do this, our people, judging by their nature, will firmly become attached to the winners. ”

Alexander Suvorov was great not only by his victories, but also by the purity of the heart, the nobility, the criterion of which was his honor. Only one example of many similar ones: during the Italian campaign, a wounded French general Salma was captured by the Russians. He was nursed in an army hospital. It so happened that the French were robbed by Russian officers who were lying with him in the ward. Upon learning of this, Suvorov became indignant - the thieves, despite their military merit and awards, were demoted to the ranks and punished in an exemplary manner. "Austerity requires the greatest observance of military rules," wrote Suvorov. His soldiers and officers knew the integrity of his commander in matters of honor and boldly entrusted him with their lives.

The high nobility of the spirit of the Russian commander could not be appreciated by foreigners who continued to slander Suvorov. In their understanding, the Russians, by their Asian nature, could not have high moral and ethical qualities, while remaining barbarians. I could not resist the temptation to kick the Russian bear and the popular English poet, contemporary of Suvorov - George Byron. In his poem "Don Juan" he derived the image of the commander as a bloodthirsty and merciless man. There, for example, there are such lines:

Suvorov, taking off his uniform, in one shirt,
Coached Kalmyks battalion
Swore, if somebody is a poor thing,
Clumsy was il tired.
The art of killing with bayonets
He taught deftly; he believed
That the human body, without a doubt,
Only material suitable for battle!

Suvorov exhibited heartless even in relation to subordinates. However, it is well known that almost all of his victories he won not only with smaller forces than the enemy, but also with less losses at times, because he was really a coast of his soldiers. His paternal care is well known for those with whom the Generalissimo loved to communicate both on the march and on a halt, finding in it great benefit for himself. Suvorov was close to their needs and needs, because the service he began as an ordinary musketeer in the Semenovskiy Life Guards Regiment, where he served six and a half years.

Not far from Byron, in the description of the barbaric behavior of the great commander, some modern rhymoplets were gone. One of them, now deceased, published a poem “Suvorov” a few years ago. To understand in what form the commander is registered, I will give only a few lines:

Two centuries of talk -
Books, monument, movies ...
All - Suvorov! And what about Suvorov?
The commander was with Makhno ...
Because, that lucky more,
Longed up his long nose -
Cut in Turkey, hung in Poland,
Pugacheva to execution carried.

As you can see, after two hundred years, everything still revolves around the extraordinary luckiness of the commander and his bloodthirstiness. The dead Suvorov is terrified by the enemies of Russia and does not give rest to “grave diggers” with his loud victories. As if anticipating this, Alexander Vasilyevich wrote: “Heroism is overcome by courage, patience is speed, reason is intelligence, labor is laziness, history is newspapers.”

A separate story is an attempt to record a sincere Christian, patriot and monarchist Alexander Suvorov in the ranks of the enemies of the throne and the Church - the Masonic organization. Rumors about his involvement in it are drawn from the Seven Years War (1756 – 1763), in which the young Suvorov took an active part. In 1761, the governor of Eastern Prussia, just conquered by Russians, was appointed his father, Lieutenant-General Vasily Ivanovich Suvorov, who wanted to gather as much information as possible about people inhabiting this land, their moods and secret societies. While on leave to injure his father’s residence, Koenigsberg, at the request of his dearest parent, the young lieutenant colonel Suvorov visited the local Masonic Lodge “To the Three Crowns” for reconnaissance purposes, presenting there as their like-minded brother and brother from the Three Stars lodge in St. Petersburg, which in fact never did not exist. The local brothers, delighted with the visit of the son of the governor, immediately wrote down Oberst-Lieutenant Alexander von Suvoroff to their organization.

Within two months, the Koenigsberg brothers listed Alexander Suvorov on the lists and even notified the Berlin Lodge of him. But the Russian lieutenant colonel no longer appeared. Having fulfilled the commission of his father, Suvorov Jr., who, by the way, did not see great danger for Russia in German Freemasonry, went to the army and fought with distinction against the Prussians for the entire campaign.