November 19 2015
191
November 17th distant aviation The aerospace forces of Russia conducted a unique operation. 25 long-range and strategic bombers carried out a massive missile bomb attack on various terrorist targets in Syria. This operation is interesting for its tactical and strategic consequences, and is also important from the point of view stories. On November 17 the first real combat use of strategic bombers Tu-95MS and Tu-160 took place. Despite a fairly long career, these planes have not yet participated in armed conflicts and have not destroyed actual targets.


According to the Russian Ministry of Defense, in the morning (Moscow time) on November 17, long-range Tu-22М3, Tu-95MS and Tu-160 bombers with various payloads were raised into the air. The 12 of the Tu-22М3 airplanes that took off from the Mozdok airfield, from 5: 00 to 5: 30 bombed several targets in the Syrian provinces of Raqqa and Dair Al-Zor. In 9: 00, the strategic missile carriers Tu-95MS and Tu-160 launched an attack. They launched 34 airborne cruise missiles, which soon destroyed the predetermined targets in the provinces of Idlib and Aleppo. Having completed missile launches, the "strategists" went home to Engels airbase. Later, around 16: 30 Tu-22М3 bombers struck a second blow at enemy targets. During this operation, Tu-22М3 overcame about 4510 km, Tu-95MS and Tu-160 - 6566 km. 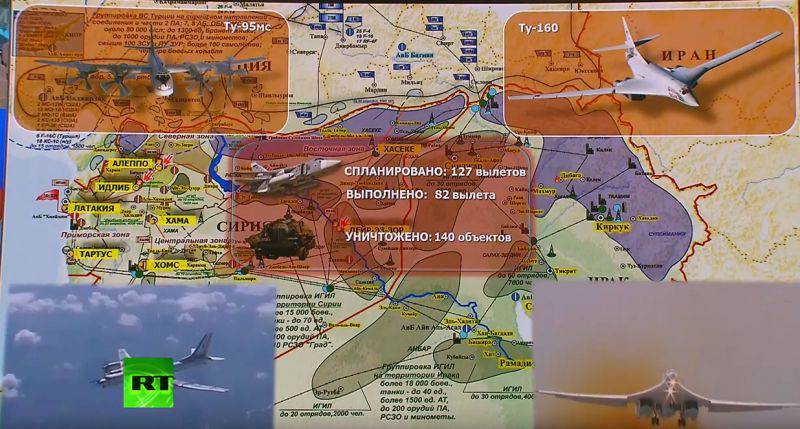 Slide from the presentation of the Ministry of Defense dedicated to long-range aviation sorties. Shot from Russia Today / Prokhor-tebin.livejournal.com report

As already mentioned, last Tuesday was a unique day for domestic long-range aviation. Immediately, two strategic bombers, after several decades of relatively peaceful exploitation, finally took part in real hostilities and fired rockets not for conventional targets, but for real enemy targets. If we count from the date of adoption, the Tu-95 bombers had to wait for this day 59 years (from 1956), and Tu-160 - 28 years (from 1987). Thus, the Tu-95 set a new world record in time between the start of service and the start of a real combat career, which is unlikely to ever be broken.

Recall design work on a new strategic bomber, called Tu-95, started in the late forties. The first flight experienced vehicle of this type made 12 November 1952, i.e. 63 years ago. Initially it was a turboprop bomber designed to deliver conventional and nuclear bombs to enemy targets. The specific requirements for the aircraft led to the use of a number of the most interesting technical solutions, which in one way or another provided the possibility of several upgrades and uniquely long-term operation.

Over time, several modifications were made to the base Tu-95 aircraft. An upgraded version of the Tu-95M was developed and put into series, in the late fifties the first missile carrier of the family appeared - the Tu-95K. Also, the long-range bomber became the base for the Tu-95РЦ reconnaissance target designator, the Tu-142 anti-submarine aircraft, the Tu-126 anti-radar aircraft, etc. Of particular interest is the project Tu-114, in which the strategic bomber "turned" into a long-haul passenger airliner. Also, the Tu-95 was to be the basis for a Tu-119 bomber equipped with a nuclear power plant.

On the basis of the first missile carrier of the Tu-95K family, several modifications were developed for the use of guided missiles of various types. The Tu-95K, Tu-95K-22, Tu-95KD and Tu-95КM airplanes could carry and launch cruise missiles X-20, X-20М and X-22, which significantly increased the strike potential of long-range aviation and also expanded the range of tasks . The operation of the K-family continued for several decades, after which this technique was supplemented or replaced with newer aircraft.

At present, Russian long-range aviation operates several dozen Tu-95MS aircraft. This modification, intended for the use of air-based cruise missiles, was developed in the late seventies on the basis of the Tu-142M anti-submarine aircraft. Since the early eighties, these missile carriers were produced serially and handed over to combat troops. Until 1992, the 90 Tu-95MS aircraft were built, after which mass production was stopped. At the moment, more than three dozen such aircraft remain in service.

In 2013, the next stage of modernization of the existing aviation technology began. Bombers Tu-95MS are being repaired and upgraded, during which they receive a set of new radio-electronic equipment, which allows to improve the general characteristics, as well as to use weapons of new types. After modernization, the aircraft receives the designation Tu-95MSM. It was argued that the upgraded aircraft will be able to remain in service, at least until the mid-twenties. 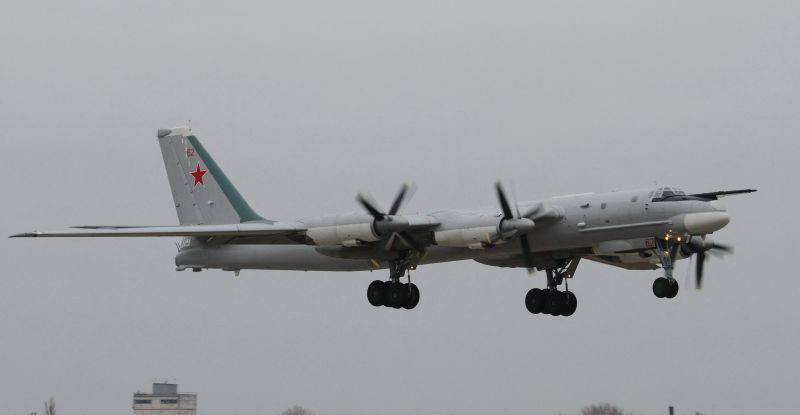 On the morning of November 17, 2015, six Tu-95MS bombers flew from Engels airfield and headed for the launch site of cruise missiles at terrorist sites in Syria. As far as is known, in this operation the aircraft used cruise missiles X-55 (or X-555). The video materials published by the military department show that the used missiles were transported inside the cargo compartments, on drum launchers. The number of missiles launched by each of the six aircraft is unknown.

Creating a promising strategic supersonic bomber-missile launched in the late sixties. After a number of different events and disputes at the highest levels, the Tupolev Design Bureau was attracted to the development of such equipment, which eventually won the competition to create a new aircraft. In collaboration with several hundreds of related enterprises, a project was created, according to which a prototype of the new aircraft was built in the early eighties.

The first prototype of the Tu-160. Photo Airwar.ru

An experienced Tu-160 first flew 18 December 1981 of the year. A little later, several other vehicles joined the flight tests. Checks and refinement continued over the next few years, after which it was decided to start mass production of new technology. In 1984, the Kazan Aviation Plant began to master the assembly of new missile carriers. The first production aircraft took off on October 10 of the same year. Later a relatively large series was built. In total, 35 machines were built: 8 prototypes and 27 production aircraft.

After the collapse of the Soviet Union, the Tu-160 bombers built and delivered by the Air Force went to Russia and Ukraine. Having abandoned its nuclear status, Ukraine intended to dispose of the strategic missile carriers that it had acquired, including the Tu-19 160 units. As a result of lengthy negotiations, an agreement was signed, according to which Kiev, in order to pay off debts for gas supplies, was to transfer to Moscow 8 Tu-160, 3 Tu-95MS aircraft, several hundred cruise missiles and various equipment. One of the Tu-160 was transferred to the Poltava Museum of Long-Range Aviation. The remaining aircraft remaining in Ukraine were disposed of.

At present, Russia has 16 strategic Tu-160 missile carriers, based at Engels airfield. Currently, a program of repair and modernization of this technology is being implemented, during which the aircraft receive a number of new equipment. Not so long ago, a decision was made to resume the mass production of such aircraft. Over the next decades, several dozen new missile carriers with enhanced characteristics could be built. 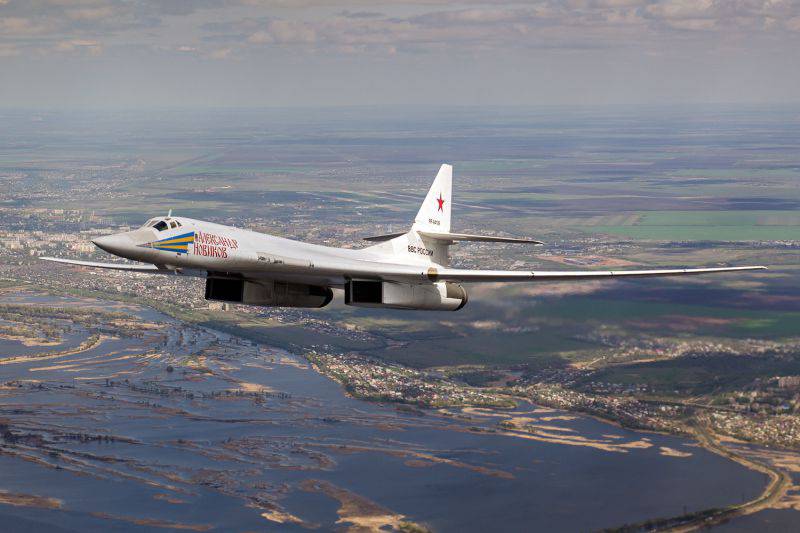 On November 17, Tu-160 bombers took part in an operation conducted by the Russian Air Force in Syria. In the morning, five cars of this type took off and headed to the launch area. The purpose of the departure was a massive attack of objects of terrorists in Syria. Going into the specified area, the bombers performed missile launches. The published official launch chronicle is of great interest: during this operation, a new type of missile was used by the Tu-160. It was not the old and customary X-55 that was used, but some new ammunition of a characteristic type, probably X-101.

For several decades, the strategic bombers Tu-95 and Tu-160 participated in various exercises, patrolled specified areas, or simply stood idle on the ground without work. For all this time they have never managed to participate in the attack of a real goal during a real armed conflict. For the first military operation, the Tu-95s have been waiting for almost six decades, and the Tu-160 were able to fire on real targets only in the 29-year of service.

The time of "inaction" is over. Both Russian strategic missile carriers finally took part in the battles and opened the scoring for their victories. During their first combat sortie, 11, two types of aircraft launched 34 cruise missiles and destroyed a number of enemy targets in two Syrian provinces. The battle account was opened effectively and efficiently. Whether the Tu-95MS and Tu-160 will carry out new combat missions to attack the objects of terrorists is still unknown. Nevertheless, these planes have already shown what they are capable of, and now no one can accuse them of the fact that they cannot perform real combat missions.