November 20 2015
127
The French aircraft carrier Charles de Gaulle again sent to the shores of the Middle East to participate in the fight against terrorism. Official Paris a few weeks ago decided to strengthen aviation a group operating in the region with several carrier-based carrier-based aircraft. In addition, in the context of recent events, sending an aircraft carrier to the shores of Syria will be a response to recent terrorist attacks in Paris. It is alleged that Charles de Gaulle will be able to significantly increase the shock potential of the French group in the region.


On November 5, a meeting was held in the Elysée Palace with the participation of French President Francois Hollande, the heads of the military department and other structures. During this event, the military and political leadership of France decided to strengthen the air force in the Middle East by sending the aircraft carrier Charles de Gaulle with a group of attack and other aircraft on board. In his speech on the results of the meeting, the French president stated that sending an aircraft carrier would increase the effectiveness of combat work, and also simplify the process of coordination with the allies in the coalition.

Together with the aircraft carrier Charles de Gaulle, several other ships were to go to the eastern regions of the Mediterranean, the task of which would be to ensure the combat work of the entire formation and to resolve some other issues. In this case, the core of the ship group was to become exactly the aircraft carrier, whose carrier-based aviation would become the main instrument for the destruction of the positions of terrorists. 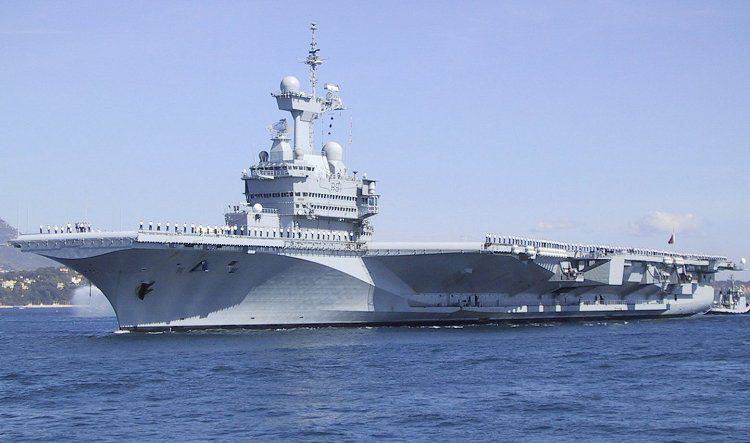 It should be noted that in early November, the French leadership only decided to strengthen its grouping, but did not specify the time frame for sending the naval connection. The exact date of the release of the aircraft carrier at sea became known only on November 16. Speaking in parliament on this day, F. Hollande said that Charles de Gaulle and other ships would leave the port of registry 19 in November. In a few days, the carrier will overcome the path from Toulon to the shores of Syria, where he will begin to perform combat missions.

In his speech, the French president also called the tasks of carrier-based aviation. With its help, it is planned to triple the shock potential of the French group in the Middle East. Now, according to Hollande, this is not about deterring terrorists, but about their total annihilation. France intends to increase efforts to combat terrorists. The main enemy of Paris in Syria is the terrorist organization Islamic State, which recently launched a series of terrorist attacks in France and was banned in several countries, including Russia.

In the absence of any serious problems, the French carrier strike group will arrive at the shores of Syria early next week and, apparently, will immediately engage in combat work. Currently, the region has a relatively small grouping of French aircraft of several types, and the arrival of the aircraft carrier Charles de Gaulle will significantly increase its quantitative and qualitative indicators.

It should be recalled that "Charles de Gaulle" has already participated in the fight against the organization "Islamic State". At the beginning of this year, the aircraft carrier ensured the operation of deck aircraft during Operation Shamal for several weeks. For about two months the ship was in the Persian Gulf, and its aviation group conducted reconnaissance flights and delivered strikes against enemy ground targets. At the beginning of the operation, it was noted that the use of an aircraft carrier made it possible to almost halve the time required for the aircraft to arrive at the target area, compared with aircraft based at the Al-Dhafra 104 airfield in the United Arab Emirates.

France joined the fight against the "Islamic State" in September last year. The operation was called "Shamal", in part of one of the Middle Eastern winds. On September 15, the first flight took place, during which two Dassault Rafale fighters conducted reconnaissance of the specified area in Iraqi territory. September 19 steam "Rafale" dealt the first blow to the objects of terrorists in Iraq. In the future, French aviation continued to carry out combat missions for reconnaissance and attack purposes. The combat work of fighter-bombers, based in the UAE, continues to this day.

As of the beginning of November, six Rafale fighter-bombers and the same number of Mirage 2000 aircraft of two modifications were involved in Operation Shamal. In addition, one Dassault Atlantique patrol aircraft, one Boeing E-3 long-range radar detection aircraft and one Boeing C-135FR air tanker are involved.

In mid-February of this year, the aircraft carrier Charles de Gaulle arrived in the Persian Gulf, whose aircraft soon began to attack targets in Iraqi territory. The first sorties were made on February 23, and the destruction of targets started two days later. Subsequently, the French carrier-based pilots continued to attack various objects belonging to terrorists. During the first voyage to the shores of Iraq, the strike force of Charles de Gaulle consisted of the 12 Rafale fighter and the 9 Super Étendard attack aircraft.

The combat work of the aircraft carrier and its aircraft continued until the end of April. During this time several hundred sorties were flown. At the same time, the average flight intensity of French aviation was relatively small. Even during the most active operations, Charles de Gaulle provided no more than 10-15 sorties a day. Nevertheless, even at such a pace of work, as well as through the help of airplanes from ground bases, deck aviation managed to solve the tasks set by the command.

At the end of April, the only French aircraft carrier and other ships of the strike formation left the Persian Gulf and began training combat missions in the Indian Ocean. In the future, before the crews of the ships were put some other tasks. As of early November, Charles de Gaulle was in the Mediterranean. 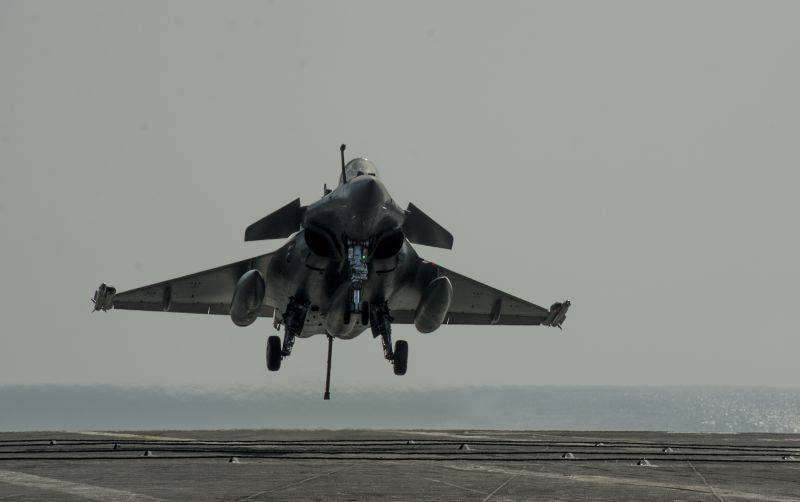 French fighter Dassault Rafale lands on the deck of the US aircraft carrier USS Carl Vinson (CVN 70), 3 in March 2015.

In accordance with the order of French President F. Hollande, the aircraft carrier Charles de Gaulle and several other ships must go to the shores of Syria to participate in the fight against the Islamic State. This will be the second trip of the ship to this region as part of Operation Shamal. What the results of the work of the French carrier-based aviation will be is not completely clear, but there is reason to believe that after the recent terrorist attacks in Paris, the commanders and pilots will not stand on ceremony with the enemy and will work with maximum efficiency.

In the sky of Syria, French carrier-based aviation will work together with aviation groups of some other states, including Russia. In addition, interaction between ship groups is planned. In connection with the imminent arrival of the French aircraft carrier 17 on the shores of Syria in November, Russian President Vladimir Putin ordered the commander of the Moscow guided missile cruiser, covering the Russian group from the sea, to establish direct contact with the French and work with them as allies.

In addition, V. Putin said that the Russian Minister of Defense and the Chief of General Staff had already received relevant instructions, and now it is planned to develop a plan for joint work at sea and in the air. Thus, it can be expected that the two countries will unite their efforts in the fight against terrorism and will jointly attack various targets, bringing the defeat of the “Islamic State” closer.

According to French press reports, currently on board the ship Charles de Gaulle are 18 fighter-bomber Dassault Rafale and 8 Dassault-Breguet Super Étendard attack aircraft - 26 planes capable of attacking ground targets. In addition, X-NUMX fighter jets Rafale and Mirage 12 are also located at the bases of the region, not counting other types of aviation technology. Thus, in the very near future, 2000 strike aircraft will be present as part of the French air force in the Middle East, which will undoubtedly increase the number of sorties and thereby increase the overall effectiveness of combat work.

It should be noted that the French aviation is not waiting for reinforcements and is already increasing the number of combat sorties. So, already on the last Sunday of November 15, 10 of French aircraft struck terrorists in the city of Rakka, which is a kind of their capital. French aviation dropped two dozen bombs on targets, as a result of which two large objects were destroyed. One of them was a complex with a command post, a training center for militants and an ammunition depot, the second was a training camp.

On November 19, the aircraft carrier Charles de Gaulle must leave the home port and go to the eastern Mediterranean, where he will again have to participate in the fight against terrorists. The appearance in the theater of military operations of a ship with 26 strike aircraft and other types of equipment can positively affect the quantitative and qualitative indicators of the combat work of the French aircraft, as well as bring victory over the terrorists. However, in order to make the first full-fledged conclusions about the work of the carrier-based aviation of France, one should wait until the start of the combat missions. Whether the Charles de Gaulle air group justifies its hopes is known in the very near future.