Europe after November 13: Double Standards as Politics, Practice and Worldview

Paraphrasing the great Bulgakov, this is exactly how any online dialogue can begin today in the light of recent events. And all this despite the fact that all the same gentlemen, only a couple of weeks ago, proceeded with a malicious delight about the fallen A321. A few days after the crash, they completely doubted the truth of the people's sorrow, screaming about the window dressing, and then began to demand to stop this “theater”.

And all would be nothing if not the tragedy of Paris. Here they showed us how to truly grieve! The physiognomy of the liberals, shiny with permissiveness, began to be covered by the French tricolor, like a forest of mushrooms after the rain. And it all looked more than ambiguous. For example, on the avatar of a young lady Larina, Larina herself was wearing a flag for the mourning flag for those days, whether with a smile or a fly in her mouth. 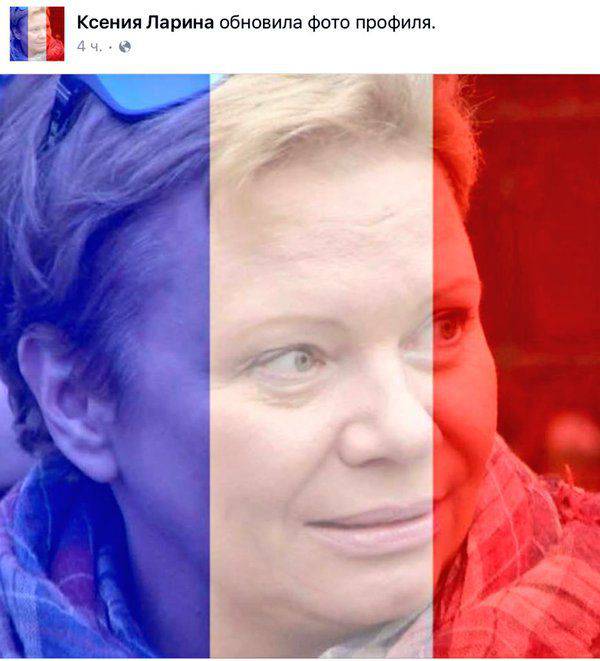 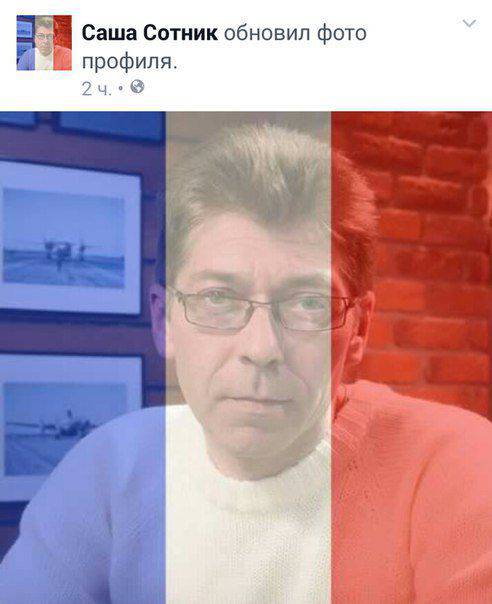 Well, damn it with them! As they say, what to expect? Who feeds a girl, he dances her. However, the neighboring countries decided to show how to grieve correctly. For Europeans, we grieve, not for Asians, indeed. The farthest away in this went our "nebrat". They did not have time to cool the keyboard from the boundless joy of Ukrainians for the "success" of ISIL in Syria, and the bodies on the streets of Paris did not even cool down, as hundreds of Ukrainian mourners, as if on cue, were armed with mourning faces and flags and rushed to remind of their existence. And since “Pray for Paris” did not exist yet, the mourners, having looked through the old manuals, declared themselves “I am Paris”, which was only the beginning ... 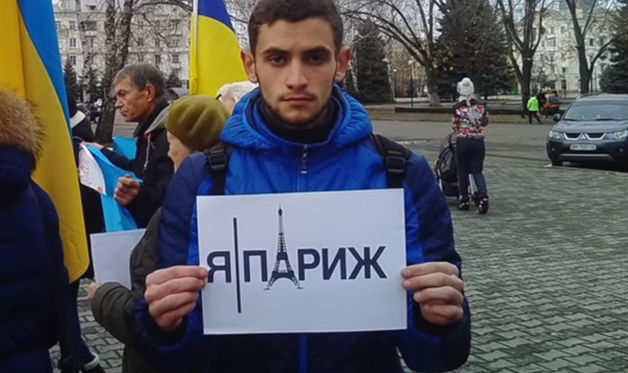 The entire Ukrainian grid was covered with eiffel towers like the face of a youngster with acne. The epidemic of solidarity with Europe has reached such proportions that even the most democratic gourmet of all times and peoples had to stop it. Surprisingly, the freedom-loving Ukrainians showed miracles of humility, and the French flags disappeared at once, on some sites, along with the pages themselves, on which the Nebratians poured out their grief. 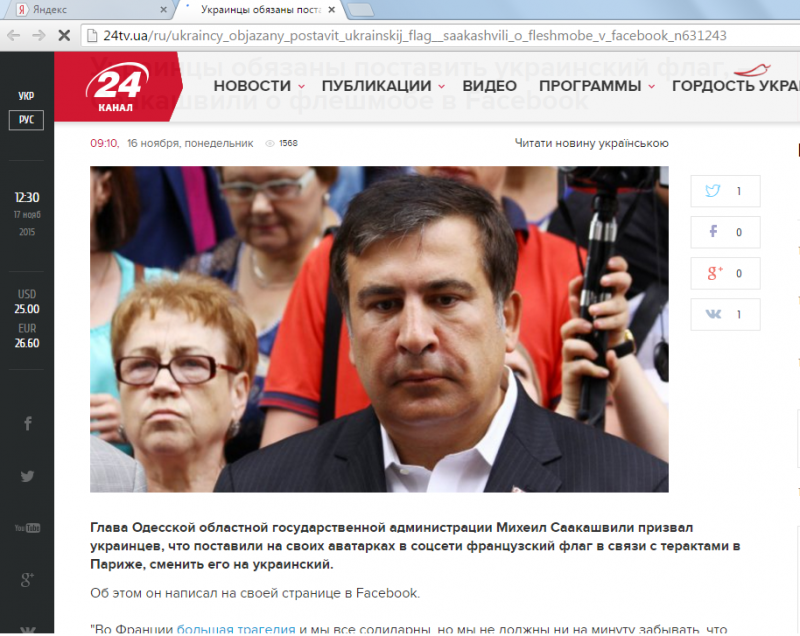 In distant countries, solidarity with Europe turned out to be no less popular, but more creative and technological. Thus, the underground fighter against the system, the artist Banksy, unusually harmoniously, and most importantly, in a timely manner, made graffiti about the tragedy in Paris. Learn, artists, nothing superfluous, concisely, the main thing is on time, it’s not a scrotum to pin to you. 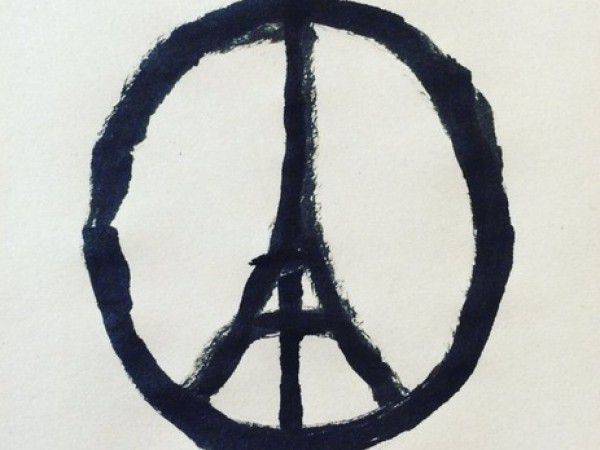 By the way, about manufacturability. In contrast to the "ostentatious" compatriots who, by virtue of their skills, each showed solidarity with the families of those who died in А321, Mark Zuckerberg pinned a Facebook feature for Europeans who mourn for Facebook, which automatically paints your avatar in France tricolor. It's cute, it's comfortable! Now the man in the street does not just kill time with meaningless chatter, but commits neither more nor less humane compassionate act. Yes, and T-shirt "from Banksy" you can buy.

The media, which instantly stated that from now on we were all a bit French, did not lag behind. Which in itself is strange, since no one has ever offered me a Syrian, Iraqi or Libyan person personally. Even after the A321 disaster was recognized as a terrorist attack. I didn’t notice graffiti either, and I didn’t see any flag buttons. There were cartoons, a lot of caricatures ...

It was crowned with all the loud statement of global unity. You believe it, right? Are you so cynical? Unity after the terrorist attacks in Paris exists only in the mouths of politicians. In fact, the statement of fact: we are all equal, but someone is "more equal". The German satirist Volker Pispers spoke figuratively and precisely about this: “Americans are an orchid among people, we are Europeans — we are daisies, the rest are just a weed, forget about them.”

What was that? All this?

Tragedy, of course. This is followed by grief, not as a reaction, but literally as the main sign of belonging to the human race. Later, there is a need for a fair punishment of the perpetrators. And finally, the minimum guarantee that this does not happen again.

And if the latter is practically impracticable in modern realities, the rest is completely. Did the Parisians get it? Not! They could not get it in principle. And the funny thing is that they did not notice. The great hypocrisy of the century and the existing system, entrenched in the minds of the inhabitant. The greatest betrayal of the blood of the Parisians is by their own powers.

No conspiracy theories. Bare facts. Before putting on a mournful physiognomy once again, Hollande didn’t lead by ear, when the whole West flirted with terror. He was divided into moderate and unlimited, sometimes confusing, to whom did he weapon horrible. Spreading the Libyan quarters into pieces, France could not even think that these ungrateful people, rushing about among the ruins, would come to them. And these ungrateful (here are scoundrels!) Possess military skills and for some reason are angry at them. 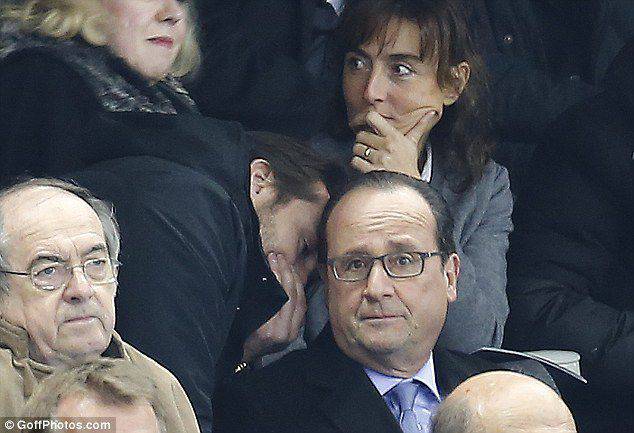 Why go so far? Did the Maidan boys, who set fire to the buildings, killed the staff and seized the institutions, were somehow different from the terrorists? Oh, I forgot, they are for democracy. Then why, when the lads decided to patch themselves up for free in the European hospitals, at their sight, European pens began to automatically look for an aspen stake and a crucifix? But even then, the West applauded them, looking for something uncovered in rust at the cekhgauz.

Flirting with terror, simultaneously satisfying mercantile interests and diverting threats from their chamomile field, Europe fell into such a rage that it did not notice, like some dark-skinned boy had already whistled the keys to the apartment. Well, do not explain to every suicidal kid with free automatic weapons, that there are enemies, and there are enemies. But we will kill those later. When? Well, later, leave me alone, rifles brought up ... 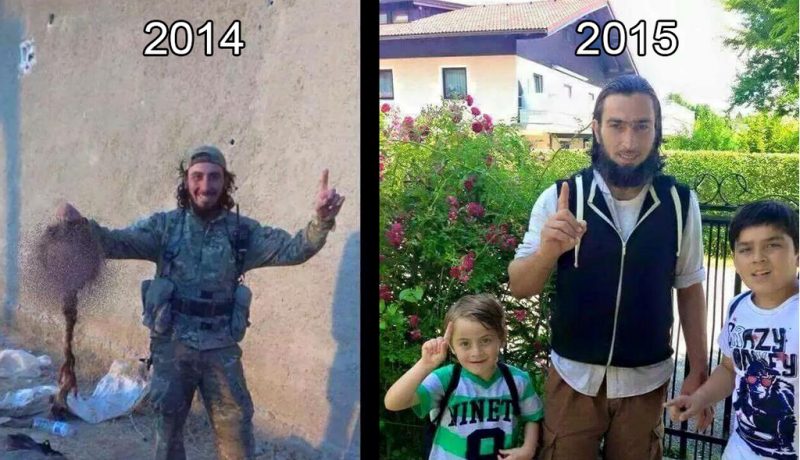 But now everything has changed! After all this! Not a drop. It is too tempting to have let insane, but efficient guys without the need to pay social benefits, respect human rights norms (who only invented them - you simply do not have time when you bomb two or three countries at once), without need to inform this ever-interested public and even more needlessly again howl about battered western values.

So why all this informational hype, the meltdown of politicians on the screen, shaking their fists at the public and letting in a mean tears? In addition to satisfying sporadic attacks of narcissism and desperate attempts to patch up a faded reputation, with a sauce of belligerently mourning motifs and loud speech turns, there is a main task. Namely - to drown the population in tears and grief to the extent that the wall electorate truly believes that it lives in a fateful era of change and trial. And now, when the whole "world has come together", questions about the old and so much-loved cannibal practice of feeding scum will simply become irrelevant. Well, who in such an awkward moment dares to remind of this without false grief?

From this, the rhetoric in the media is full of journalistic clichés, such as “we will never be the same again,” “the world has changed” ... USA image of a sufferer and a fighter against terror. Well, so that fun games don't confuse the public.

What about Russia? Why are these loud statements about the international antiterrorism committee and participation in summits? Why do our media so actively promote this stupid idea that the West has changed and recognized Russia's approach to the problem as constructive? In fact, all this is the acrobatics of the domestic bear, which for more than a decade has been playing poker in a pit with snakes, and these creatures are shamelessly cheating all the time.

The only thing that needs to be clearly known is that the reason why the West has led and will continue this practice, and the reason why the Western public has so easily swallowed all this political fuss is the same. Practically at the genetic level, any European or American thinks he is a sacred cow, a supreme being, the crown of the food chain. That is why any good deed on their part sometimes looks condescending, because it passes under the cameras, and is sent exclusively for internal use. Picture to calm the shower of the electorate. Therefore, to wage war with the hands of terrorists, it is so easy for them to replace power with their own hands. After all, will not the highest being, surrounded by the same enlightened ones, suffer a long time with conscience because of a crushed cockroach?

And the electorate of Europe easily believed that now “the world has come together”. How not to rally around the crown of creation! But this is not a problem for them, except a problem for their psychotherapist. This is a problem for us. Only the realization of this is the key to survival. Since any word they give is worth nothing, like a word given to some distant friend from the deaf hinterland.