Work has begun on a new defense plan.

November 19 2015
35
16 November, Russian President Vladimir Putin signed a decree introducing a new defense plan. In accordance with this document, which entered into force at the time of signing, from 1 in January 2016, the implementation of the new Defense Plan of the Russian Federation will begin, which will be valid until 2020. The new Defense Plan will be a replacement for the previous similar document adopted in January 2013 of the year and calculated up to 2016.


The presidential decree was the first step in the implementation of the latest instructions. During the November 13 meeting, V. Putin announced the need to adjust and clarify key military planning documents, such as the Defense Plan. The main reason for this is the changing situation in the international arena, as well as the heightened threat of international terrorism. The updated Defense Plan and other documents developed within its framework should be the answer to new threats.

During a recent meeting, the president recalled that the first stories The country's defense plan was adopted at the beginning of 2013, and stipulated the main features of the state’s defense strategy. This document identifies potential risks and threats to the security of the state, as well as identifies the main actions in key areas, such as the development of the armed forces, mobilization training, etc. In addition, the range of tasks of certain departments was determined. The first defense plan was calculated for 2013-16 years. In the near future, the implementation of the second version of this document will begin. 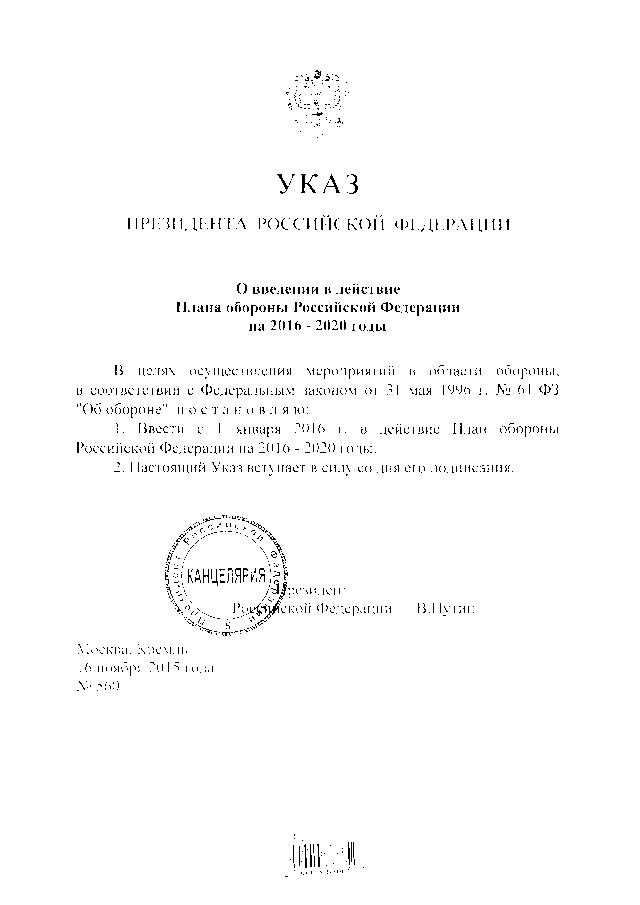 A new defense plan has not yet been developed. In addition, part of the documents of the plan is not subject to publication. Because of this, at the moment the main features of the new plan remain unknown, and it remains only to try to predict exactly what changes in the situation will be taken into account in the documents. The press and experts make predictions on this topic, but official confirmations or refutations will appear much later.

Some publications recall recent statements by the president, and also try to “link” them with the news about the new Defense Plan. For example, the TASS news agency recalls that during a recent meeting on the development of the armed forces, V. Putin once again raised the topic of foreign missile defense systems. The head of state expressed his intention to continue creating his own missile defense systems, but noted that it was planned to pay attention to strike systems first. Such weapons, according to the president, should be able to overcome any means of defense of a potential enemy.

V.Putin also reminded that the real goal of building a Euro-Atlantic missile defense system is the desire of the United States and its allies to neutralize Russian strategic nuclear forces. In response, Russia must develop its nuclear triad and other means of ensuring strategic security.

Such statements by the president may indicate that the updated Defense Plan will take into account recent changes in the situation with foreign missile defense systems and other features of the situation in the field of strategic weapons and strategic security. Naturally, the details of this part of the Defense Plan remain unknown. Moreover, the relevant documents at the moment may not be ready.

TASS also recalls the words of V. Putin concerning the development of the armed forces through the supply of new materiel. The president urged to catch up and get rid of the problems that have plagued the army and defense industry since the nineties. At a certain period of the country's modern history, the armed forces and the defense industry were left without the necessary funding, which led to corresponding negative consequences. Now it is proposed to pay the necessary attention to these areas and restore the necessary situation.

The President stressed that the country will not be drawn into any arms race and is not going to “catch up and overtake” anyone. Nevertheless, it is necessary to catch up at the turn of the nineties and the two thousandth, getting rid of problems that still make themselves known.

According to some reports, the current Defense Plan for 2013-16 provided for some measures to develop the defense industry and re-equip the armed forces. It can be argued that one of the sections of the new plan will be devoted to various aspects of the development of defense enterprises, the creation of new projects, etc. For obvious reasons, the details of such plans will not be published in full in the foreseeable future.

It can also be assumed that one of the main themes of the new Defense Plan will be the fight against terrorist organizations. Various such formations attempt to hold their “shares” in different countries, as a result of which a large number of people die. Because of this, such threats should be taken into account in the new strategy, especially after the true causes of the crash of the airliner over the Sinai Peninsula were established.

A potential threat to a country's security, which should also be taken into account when planning, is open and “frozen” conflicts in close proximity to Russian borders. First of all, it is a civil war in Ukraine. In addition, certain risks may be associated with disputed territories in several other regions.

The question of the expansion of NATO eastward and the regular holding of exercises near the borders of Russia remain relevant. The buildup of a NATO group in Eastern Europe has long been a cause for criticism and fear, since it represents a certain danger to Russian interests. At the same time, the events of recent years, especially those taking place against the backdrop of the current deterioration of the international situation, clearly indicate that the NATO leadership intends to continue the implementation of its plans.

According to recent reports, the Ministry of Defense and related organizations will prepare a new Defense Plan for the 2016-20 years in the next few weeks. The development of this document will be completed in December, and it will take effect on January 1. For several reasons, the details of this plan are still unknown and it remains only to speculate on this point. Perhaps some of the provisions of the plan will be published in the foreseeable future. Nevertheless, even without a wide publication, the new Defense Plan will become a key element of strategic security for the next few years.

Ctrl Enter
Noticed oshЫbku Highlight text and press. Ctrl + Enter
We are
Situational analysis of the death of the MH17 flight (Malaysian Boeing 777), made on the basis of engineering analysis from 15.08.2014Military doctrine of the Russian Federation
Military Reviewin Yandex News
Military Reviewin Google News
35 comments
Information
Dear reader, to leave comments on the publication, you must to register.