“Hasn't Ukraine been frozen yet?”

November 19 2015
114
How many times has it been written that with the coming winter, Ukraine and Ukrainians will begin to freeze like a mammoth. And the reason for this will be not just another global cooling, but a competent and thoughtful policy of the Ukrainian leadership. This was written last year. This was written this year. And, if, of course, our forecast does not come true, they will write before 2019. 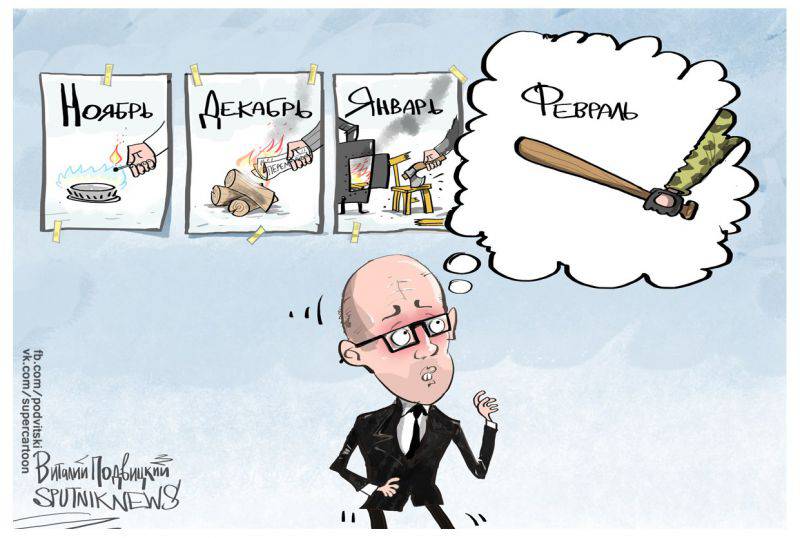 The Kiev government did everything to freeze the Ukrainians last year. And with Russian gas bullshit. And with all sorts of warming and new technologies for the extraction of heat. What only Svidomo not offered. And there have always been people who piously believed in the effectiveness of these measures.

And nature was against the policy of the top of the state. Somehow, the great nature of Ukraine has not yet experienced on citizens Square. Sometimes it seems that she, nature, conducts a giant experiment on natural selection. She wonders how long she will survive after living conditions become more severe. But at the same time, realizing that the majority are not so mobile and can not make decisions quickly, last year the winter was specially “dirtied”. Remember, this old, underused expression now is "Orphan Winter". Winter, which will spare the orphans with its warmth.

Yes, and Russia with the sworn "friends" from the EU have tried. Added gas to the heating was. Russia added, and Europe paid. So it was winter. Difficult, but quite tolerable.

But you need to know the Ukrainian government. It will not deviate from its idea until the last Ukrainian. To freeze means to freeze! And that neither nature nor all these Russian and Western well-wishers could not prevent it. But how to do it?

Yes, just. And everything is in the hands of this very government. There are tariffs. Those that force people to pay or refuse services. Great thought. If you do not want to pay, it means that you yourself want to participate in an experiment on freezing people. Democracy. Everyone chooses himself.

And, I must pay tribute to Kiev, everything was done soundly. Already in the spring, articles about the corruption and unprofitability of Naftogaz went to the media. Experts argued the complete uselessness of this structure. The prosecutor’s office opened and closed cases on responsible employees. And among the people the point of view that Yatsenyuk needed was ripening. "Naftogaz" - parasites, and they must be deprived of state subsidies for the purchase of gas. "

No one, including many home-grown experts, understood the true purpose of this campaign. And now they do not understand. And the goal was. Imagine a situation in which the government has a certain amount of hryvnia. And they are intended strictly to subsidize the purchase of gas. And there are people who are more and more often starting to go out with posters on the same gas. Give, give, give ...

The number of US rubles in the treasury is not increasing. There is nothing for him to increase. Output? Simple and obvious. It is necessary to take subsidies from Naftogaz and transfer them to the population. That’s all. And so to convey that it looked like a heroic feat from Kiev.

And then the IMF requires the implementation of the Memorandum of 1 on April 2015 of the year. It is necessary to raise gas prices 3,3 times.

In the summer, while nature played on the side of the government, they managed to raise most of the tariffs. For example, since May, the percentage of heat energy has been increased by 71 over heat. But the summer is over. And winter came. It is necessary to increase again.

And increased. Up to almost 7200 hryvnia per thousand cubic meters. This is where the hryvnia pressed by Naftogaz came in handy. Yatsenyuk solemnly announced about subsidies to the population in 50%. However, not all consumption, but only 1200 cubic meters for the heating season. Further arithmetic. 1200 is divided into 6 months ... But there are some tricks. In December and February, even the meanest domina for heating does not require 200, but at least two to three times more cubes. But then they will need to pay for 7200 hryvnia.

It is clear that for the majority of Ukrainians it is a very heavy load. However, the government hopes for the "fat", which has been preserved in the "sacek" since the dictator Yanukovych. Ukrainians still have something to sell. And the stash is not fully selected. So, the majority will survive this winter. And there ... where the curve will take out.

Truth be told, how many wolves do not feed, and the elephant is still more. How many do not try to help a country that with perseverance worthy of a much better use and decided to die will not help. We often write about the government of Ukraine. But past regional elections have shown that this choice is not only, not so much the government, but the people. Hatred, brought up during the years of independence, covers the eyes. Let him die, but that the northern neighbor was bad.

In the first part, this slogan is carried out. And in the second ... Yes, it became harder for us. But not from Ukraine. And from the fact that a little shoulders straightened. A little bit especially arrogant "teachers of the right life" pushed themselves away. And the world around saw that Russia is not something there, on clay or snowy feet. Russia is an independent country and will not allow it to indicate how to live and what to do. And Ukraine does not want to rise. He does not want to ... Well, then, the choice of the people is the choice of God.

Ctrl Enter
Noticed oshЫbku Highlight text and press. Ctrl + Enter
We are
Results of the week. “Mom, mom, what will I do? Koo! "Situational analysis of the death of the MH17 flight (Malaysian Boeing 777), made on the basis of engineering analysis from 15.08.2014
Military Reviewin Yandex News
Military Reviewin Google News
114 comments
Information
Dear reader, to leave comments on the publication, you must to register.