Tricky comments. Mr. Ambassador Tefft, were you not mistaken in terms of LGBT country?


Apparently, finally and irrevocably disillusioned with the Russian opposition, the US State Department, in advancing its interests in Russia, reoriented itself to advocates for sex minorities. 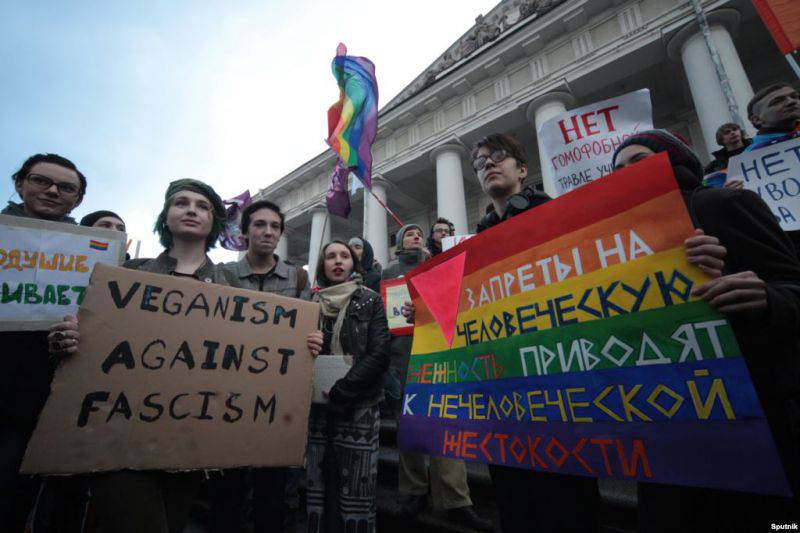 Several documents were immediately available to a number of documents, including correspondence of activists of the LGBT-Sport Federation of Russia, on possible foreign funding of Russian Open LGBT games.

About a month ago, a network of Russian LGBT activist Nikolai Alekseev appeared in the network with representatives of the US State Department, who noted his contribution to organizing a rally "in support of stopping Russian aggression against Ukraine and for restoring friendly relations with Western countries 1 in May 2015 of the year".

So, in 2013, the LGBT Sport Federation of Russia (there is one, it turns out) sent applications for grants totaling $ 50 thousand to various funds, including the American Arcus Center (in support of social justice), Pride Foundation, etc. d., to conduct these competitions. Too small, of course, but the chicken pecks on the grain.

In a conversation with representatives of the newspaper "Izvestia" President of the Federation of LGBT-Sport of Russia Konstantin Yablotsky said that the organization exists through donations and foreign grants.

"We receive donations from the participants themselves and small grants from the embassies of foreign countries - France, Finland, and the UK. The US provided resource support to us - for example, when the smoke bomb was thrown at 2014 at the Open Games basketball tournament, the We quietly played out, but we never received any financial assistance from them, and, in fact, we did not ask.

Unfortunately, we do not receive anything from the Russian side, because we are denied - we applied to the League of Nation Health Foundation, the Art, Science, Sport Foundation, appealed to the Ministry of Sport, asked to allocate space for sports training, to Moskomsport. Therefore, we are forced to live on donations and grants for organizing and holding sports competitions, he says. We now have a plight, do not know how to pay for the work of an accountant for November and December. Life has become much worse than last year, the competitions are held almost on pure enthusiasm. "

Well, not in that country, Mr. Yablotsky complains about life. But where necessary, they heard. And a landmark decision was made.

The US leadership has decided to redistribute funds allocated to the promotion of democracy in Russia between human rights organizations. According to the letter of the State Department officials, "the LGBT human rights project GayRussia.Ru and other LGBT organizations will receive increased funding from other opposition democratic organizations, as they have shown low efficiency in developing civil society in Russia."

So, the State Department is cutting funding for opposition politicians like Navalny, Yashin and the like, because they are no longer a profitable investment. The ratings of the president and the government are high, and the opposition has shown its complete inefficiency. The "Swamp" bit card is final.

This is probably why the States preferred to increase contributions to the LGBT movement of the Russian Federation. The State Department uses this kind of community to promote its ideology in countries with traditional culture. Promote their interests "by contradiction." Well, the "nasty" is clearly not against it, especially if it is paid for.

It became bad in Russia with the support of the opposition. Yes, and the opposition itself is more like a gang of ferrets, which were placed in one chicken coop. Sorry, at two. "Echo" and "Rain". But they stink. For, as was said above, "eaten up."

So we have to fighters with Russia to seek local support among different groups of the population. For example, the report of the Commission on International Religious Freedom (USCIRF) under the US government for 2015 states that it is necessary to protect the followers of the Turkish theologian Said Nursi (Nurcular) in Russia, and also Jehovah's Witnesses. The US government is convinced that “violations of religious freedom” are now spread throughout Russia. And in America, I'm sorry, with the Indians how? Everything is beautiful?

As the commission concluded, the States need to “convince the Russian government to reform the law on extremism,” and also increase funding for the Russian and Ukrainian opposition media, in particular Voice of America and Radio Free Europe.

Yeah, right now ... I would, on the contrary, added. And he equated participation in the LGBT community with high treason.

Say brute force? But no. If you look at the completely exhausted Europe, there these couples are allowed to adopt and adopt children. And we are talking about replacing the concepts of "mother" and "father" with "parent 1" and "parent 2". Wonderful!

I just don’t turn my tongue to call them “parents”. Well, who, tell me, can two babies give birth to? Educators, no more than that.

Another question is who will be brought up "in the image and likeness of their own" LGBT couples? The same, sorry, psychologically flawed people.

We go further. Take two pairs of M + F and M + F. At least, according to the theory of normal reproduction, they can just give birth to 4 children. Grow and educate. But, having repented them to the position of M + M and F + F, we get a negative population increase in 4 person. And if we take the possibility of bringing up adopted children to the already improper copulation, it turns out even worse.

A demographic strike is not a job against your country? Not cheating?

Treason as it is. Work on the destruction of the Russian population. We, as it were, don’t thank God in this matter, the government is clearly not in a position to solve these problems for now. But it is not worth making the situation worse by throwing money at LGBT parties to play games. So in this regard, the grantors we have done well.

I should add that in 2014, the well-known institution NED (the US foundation established in 1983 by the US Congress) sent $ 9,3 million to support Russian non-profit organizations. In 2013, 85 organizations were financed in nine different areas of activity (fighting corruption, civic education, democratic ideas and values, freedom of association, freedom of information, human rights, strengthening NGOs, the rule of law and strengthening political institutions), and in 2014, 96 organizations are already included in the list of grantees.

Something tells me that such a "concern" on the part of our "partners" is no accident. "Marsh" nuts spun, it's time to tighten the "rainbow".

Ctrl Enter
Noticed oshЫbku Highlight text and press. Ctrl + Enter
We are
Tricky comments. Again the old American record!Mr Tefft and the New World Order
177 comments
Information
Dear reader, to leave comments on the publication, you must to register.