November 19 2015
108
On November 16, the New York Times reported on the US Air Force’s air strikes against a convoy of tank trucks that Islamic State militants use to smuggle oil. 116 trucks from 295 were destroyed. Analysts wondered: why so far the United States has not undertaken similar attacks against terrorists who profit from the oil trade? 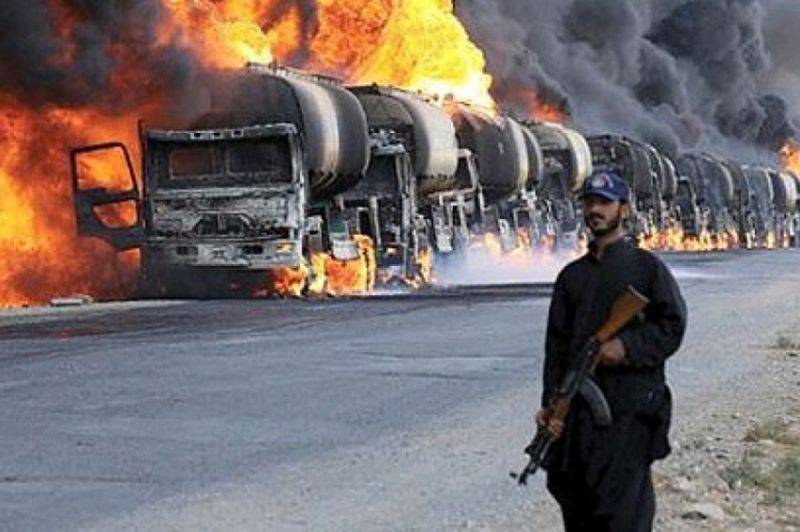 Journalist Michael Gordon, whose material was released on November 16 in "New York Times", rejects the version that the US has intensified in Syria because of the Paris attacks.

In a report from Istanbul, the correspondent writes about "increasing pressure" on the "Islamic state" undertaken by the United States of America, whose planes "first attacked hundreds of trucks" used by an extremist group "to smuggle crude oil produced in Syria." This was stated by US officials.

It is estimated that as a result of air strikes near Deir al-Zour in eastern Syria, 116 trucks of Islamic State militants were destroyed. Air strikes struck four A-10 attack aircraft and two AC-130 support aircraft. Aircraft took off from the airfield in Turkey.

Officials familiar with the operation reported that a plan of attack on militant trucks was developed long before the terrorist attacks in Paris and its environs. Air strikes are part of a “broad operation” to disrupt the financing of IG activities through the smuggling of oil.

American officials, the publication points out, have long sought to put an end to the production and export of oil, with the help of which Islamic State militants collect tens of millions of dollars every month. And to finally stop this “financing,” the US government said last week that the United States “dramatically stepped up” air strikes against the infrastructure of the Islamic state, which produces Syrian oil.

However, the United States did not strike on Monday a thousand trucks with tanks used by militants to transport oil, since there was a great risk of civilian casualties. The publication believes that at the current moment the oil logistics of the “Islamic State” has remained “basically unchanged.”

The new American campaign against IG is called Tidal Wave II. This operation was named in honor of the efforts undertaken during the Second World War against Nazi Germany - at a time when strikes were launched against the oil industry of Romania.

Americans are taking some measures that allow the local population to escape from the bombings. To reduce the risk of harm to civilians, two F-15s were flying leaflets in front of the attacks. It was about an hour before applying air strikes. Drivers were urged to abandon driving at this time. In addition, another warning was made - in the form of shaving flights.

According to the American official, there were no victims among the civilian population.

Colonel Stephen Warren, a representative of the American coalition in Baghdad, confirmed that A-10 and AC-130 had destroyed 116 trucks. He also said that "Tidal Wave II" is aimed at stopping the smuggling of IG oil and at "weakening" the ability of terrorists to "finance their military operations."

Interestingly, we’ll add on our own that at the G20 summit, Vladimir Putin was just talking about columns of gasoline tank trucks, where IG militants carry smuggling oil.

On the margins of the summit G20 in Antalya, the channel reports "NTV", the President of the Russian Federation showed pictures from space, showing the enormous scale of oil trade by IG militants. V. Putin said: “I showed our colleagues pictures from space and from an aircraft, which clearly shows the scale of the illegal trade in oil and oil products.”

According to the leader of Russia, the pictures show columns of fuel trucks stretching for many kilometers.

Speaking at a press conference following the G20 summit, V. Putin stressed the need to create an international antiterrorist coalition. Understanding that terrorism needs to be fought together comes to the United States, the Russian president said, recalling that Washington had first rejected Moscow’s proposal for joining forces.

However, let us add, Washington will not decide on a land operation in Syria. At least during the reign of Obama, who has a year to sit on the presidential throne. And without a powerful land strike, it is impossible to defeat the militants. However, in Washington came up with a way out of this difficult situation. In fact, there are the Kurds, whom the White House has long sympathized with.

The Americans have been talking about the coming assault on the so-called "capital" of the "Islamic state" for a fortnight. This is the Syrian city of Ar-Raqqah. Assault, of course, will be taken by proxy.

16 November became aware of the delivery of the next fifty tons of ammunition to the “Democratic Forces of Syria”, which include the Kurdish people's self-defense detachments and some opposition units, including the remnants of the Syrian Free Army. The purpose of these fighters - just storming Rakki.

In the meantime, Russia is attacking the militants' positions.

As reported on November 17 RIA News", Tu-22М3 bombers attacked IG facilities in the Syrian provinces of Racca and Deir ez-Zor. This was announced by Defense Minister Sergei Shoigu.

According to him, the strategic missile-carriers Tu-160 and Tu-22MS fired 34 air-launched cruise missiles at the targets of the IG.

As for the American strategy, it was appreciated by some Russian experts.

Director of the Center for the Study of the Countries of the Middle East and Central Asia, Semen Bagdasarov, reminded that before the war, the population of Ar-Raqqah was over 300 thousand people. "The vast majority of the population are Sunni Muslims," ​​he said. "Free Press". “But there was also a Christian community, most of which, apparently, either ran away or was destroyed. Thus, the population of the capital "IG", most likely, shares the views of jihadists. So, perhaps, Ar-Raqqi’s carpet bombing would be the right decision. Still, we are talking about a relatively small space. After the massive air strikes, the “Syrian Democratic Forces” would be able to quickly take R-Raqqa quickly enough. I recall that the Iraqi Kurds, the Peshmerga, took less than two days to take Sinjar. ”

The leading researcher of the Department of Defense Policy of RISI, Candidate of Military Sciences Vladimir Karyakin, on the contrary, believes that in the age of high precision weapons strange to hear proposals for the use of carpet bombing. “Carpet bombing is no longer modern methods of warfare,” he explained. - The United States has an impressive arsenal of precision weapons, which they could successfully use to attack the positions of militants. Of course, free-falling bombs are cheaper ammunition, but it’s still hard to believe that the Americans, especially after Russian volleys, with Caliber-NK cruise missiles, will use carpet bombing attacks to attack Ar-Raqqi. Reports about this (before Russia's intervention in the Syrian conflict) have already appeared in the American media, and, most likely, their goal is to demonstrate resolute intentions. ”

The deputy director of the Institute for Political and Military Analysis, Alexander Khramchikhin, generally believes that the planned assault on Al-Raqqi is almost a propaganda campaign. “Obviously, no one planned to storm Rakki before the Russian one appeared in Syria aviation- said the expert to the Free Press. - Therefore, all the current convulsions of the United States and its allies, expressed in the formation of a coalition and air strikes on the capital of the "caliphate", are just the consequences of Russian intervention, which must be somehow reacted to show that they are actually fighting terrorism. Although in reality no one in the West was going to fight him, especially Turkey, which is completely sitting on the oil of the "caliphate". As for France’s air strikes after the Paris attacks, it was a purely PR event, which, however, is almost the limit of the current French military capabilities. ”

It turns out, let us add from ourselves that this time the United States and their “coalition” do not want to “lag behind” Russia, against the background of whose actions the successes of the Western military machine seem modest. How is it: Paris explodes, but Washington doesn’t really fight against igilovtsami? Analysts are rightly surprised at the low effectiveness of the US antiterrorist operation in Syria: after all, no one prevented their bombers from hitting oil trucks earlier. Oh yeah, Washington is worried about civilians! The concern is very strange, especially if you remember how many civilians killed the Pentagon in Iraq, Afghanistan and Libya, as well as in Pakistan and other countries, where drones fly without any demand from local governments.