Fortresses of India (part of 3)

November 20 2015
16
“Junnar-grad stands on a rock of stone, is not fortified by anything, God fenced. And the way to that mountain day, they walk one by one: the road is narrow, the two cannot pass. ”
(Afanasy Nikitin. "Going beyond three seas". Translation P. Smirnova.)

One Chinese traveler noted that as early as the 7th century, Indian cities and villages surrounded walls with gates and towers erected from damp or burnt bricks, although our traveler Athanasius Nikitin saw there a city with nothing but natural obstacles protected. Throughout most of the Middle Ages, incessant wars were fought in India. The local rulers, the Rajis, fought among themselves, and from the north, Arabs and Mongols invaded the country. In India, even a special feudal military class of Rajputs arose - professional warriors and, in fact, the very same knights who were constantly learning military craft and were always ready to go on the march.

The Indians built five types of fortresses, differing by their location: in the desert, on the water, in the mountains, in the forest and earthen fortress. The most powerful was considered a fortress in the mountains, as well as a fortress ... which was held by a particularly loyal garrison! The walls of fortresses and castles of grandees in India consisted of two rows of masonry with earth or rubble filling between them (also built in Europe). The masonry stones did not hold each other together: they lay under their own weight. At the same time, the thickness of the walls ranged from 2,5 to 10,5 m. Sometimes there were several such walls, and between them were dugs filled with water, or seated with pointed stakes. They even held and fed poisonous snakes in the moats near other castles. Such a "live" weapon it was even more frightening and effective than deep ditches with stakes at the bottom. 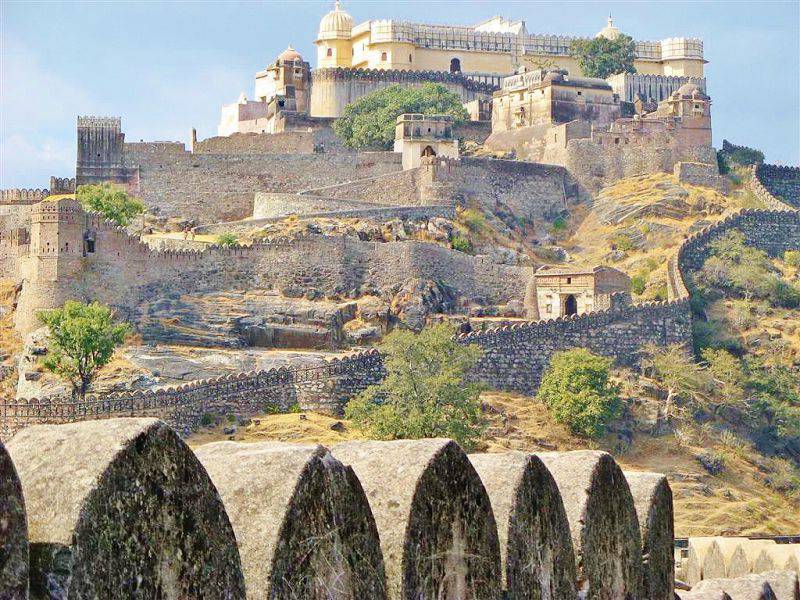 The biggest fortress in India is Kumbalgarh. There are 700 (!) Bastions in it, and inside there are more 360 temples. The rulers of Mevara shut in it in case of danger. But today it is open and can be visited by driving 90 km north of the city of Udaipur.

Embrasures were made in the walls, but machiculi, so common in Europe, appeared in India only in 1354 year. The gates were defended by two massive Barbican, between which was a winding passage. Above it hung turrets-cabins with embrasures for archers. The gates themselves in the Indian fortresses were always double-winged and very high: an elephant with a turret-palanquin on its back was free to pass through them. However, the high altitude weakened the gate. Therefore, they were made from very durable and rot-resistant teak wood covered with iron. In addition, on their outer wall had teak or iron spikes. They did not allow war elephants, which opponents used as live rams, to approach the gate closely. But the relief images of elephants adorning the walls of the gate were considered reliable amulets, as well as statues of Hindu deities. 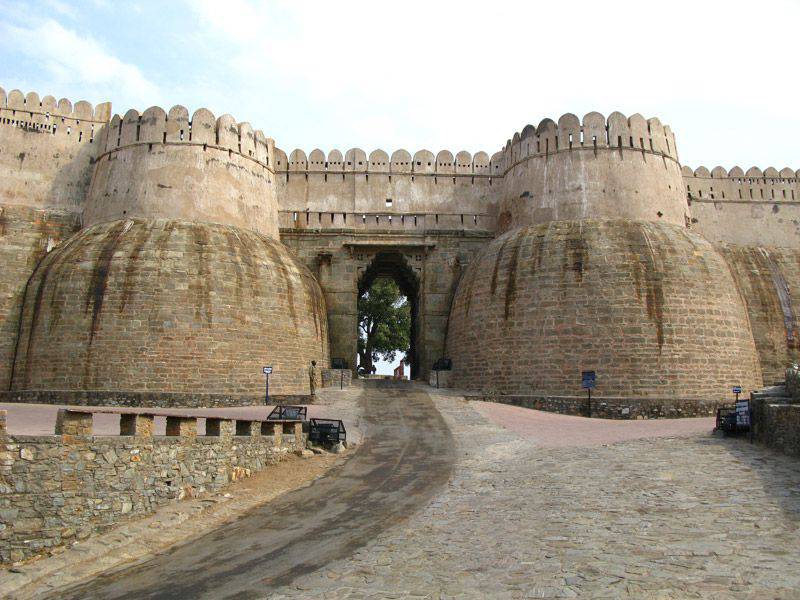 Gate Kumbalgarh. There are seven of them in the fortress!

In the hot climate of India, water was of paramount importance. Therefore, in each castle or fortress there were reliable wells and reservoirs for collecting rainwater. Quite often, gardens and fountains were arranged nearby, refreshing the air and diminishing the exhausting tropical heat. 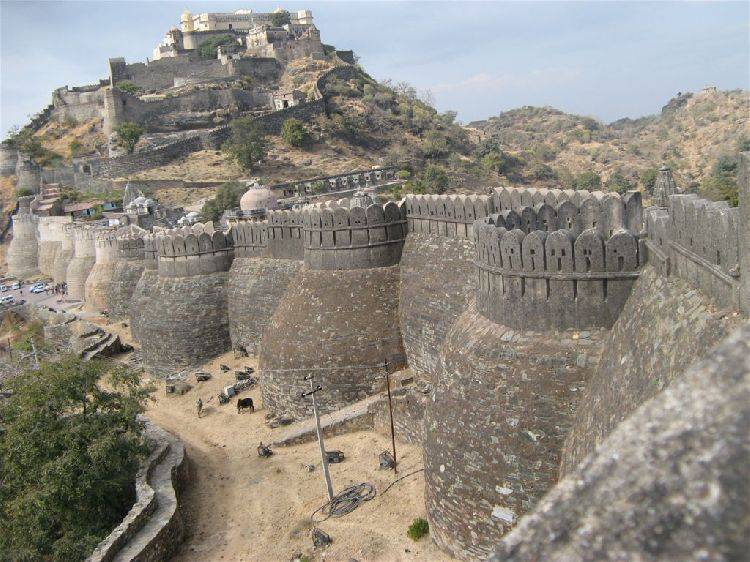 The Kumbalgarh bastions resemble a Buddhist stupa in their form. Down to scale are people, donkeys and poles with wires.

In each castle and fortress of India there were numerous underground rooms where everything necessary was prepared in advance for a long siege: water, grain, ammunition, etc. The eerie custom of human sacrifice was then emphasized by the construction of fortifications in India. It was believed that if at the beginning of construction to perform such a rite, the castle or fortress would be unapproachable because they stand on human blood. 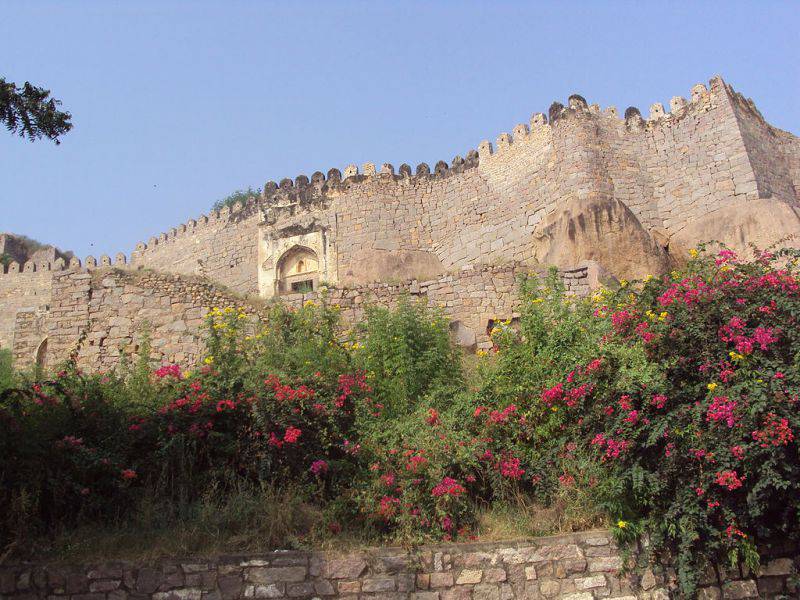 If you look at the walls of many Indian fortresses from below, then ... dizzy!

Medieval fortresses with massive walls and towers were built in India until the middle of the XVIII century, which is almost three centuries longer than in Europe. At the same time, the desire to make an impression on both enemies and friends was so great among the Indians that they often erected powerful and thick walls even where there was no need for it. The fortress could be built, for example, on a steep rock. The walls and towers were carved and stuccoed. And even the teeth on the walls tried to give a decorative shape. 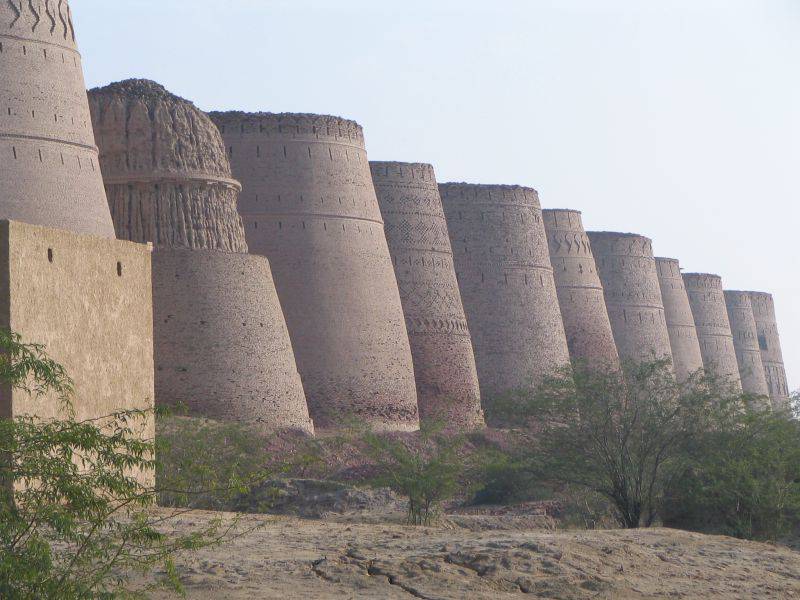 And this is not an Indian nuclear power plant at all, far from it, but ... bastions of the Deravar fortress in Bahawalpur.

In southern India, numerous rows of walls were usually built around Hindu temples, which in this case served as castles and fortresses. Gate towers at these walls sometimes reached the height of 50 m and allowed to observe the surroundings. 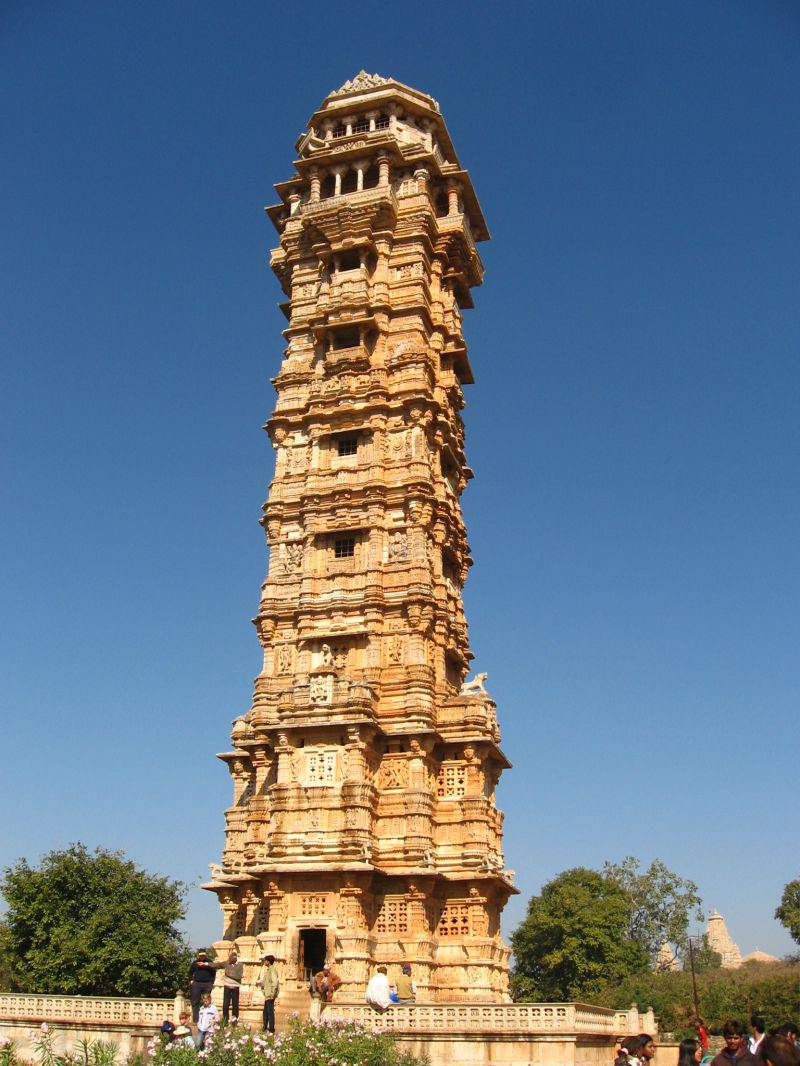 Temple tower height 28 meters. It was possible to observe from it.

Fortified mausoleums played the same role - in fact, the same castles or fortresses. However, the most famous mausoleum of India is still not a fortress, but a shrine-tomb accessible to all. This is the world-famous Taj Mahal. Storming the Indian fortress was much more difficult than European, primarily because of the heat, which exhausted people and animals. Throwing machines here were similar to European ones, but often shells or clay vessels with snakes were used as shells.

Well, now let's get acquainted with at least some samples of the serf architecture of India, because it is simply impossible to get to know everyone, because there are so many of them. Not just a lot, but a lot of them themselves, for the most part, are in excellent state of preservation, not that the numerous knightly castles of Britain itself. 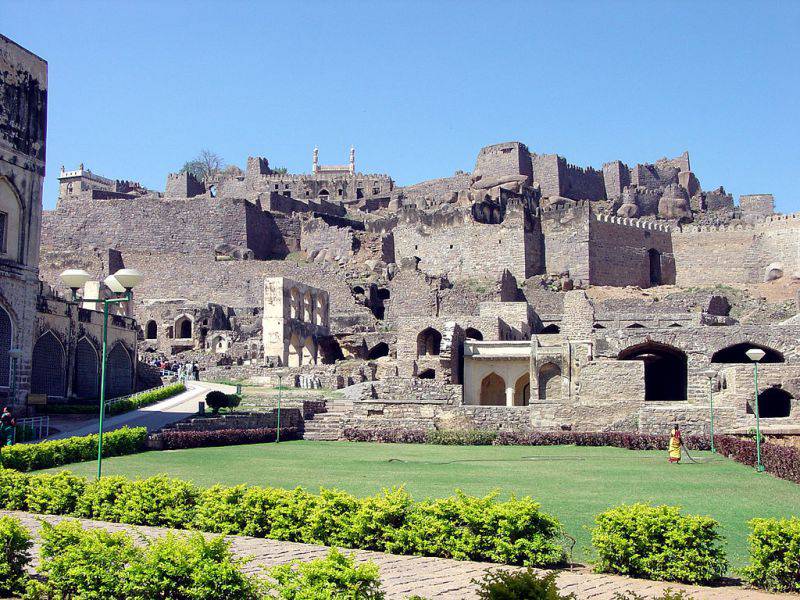 To begin, let's go to the Golkonda fortress, which is only 11 kilometers from the city of Hyderabad, where, by the way, there is a very famous university in India, where many students from Russia study, and there are also those who study there for free with grants from the Indian government! Previously, it was here that diamonds were mined, and it was here that all the world's most famous diamonds were mined! Therefore, local rajas did not spare the money for the fortress. They erected it on a hill with a height of 120 meters, and they fortified 87 with bastions on many of which are rusty guns that still stand today. 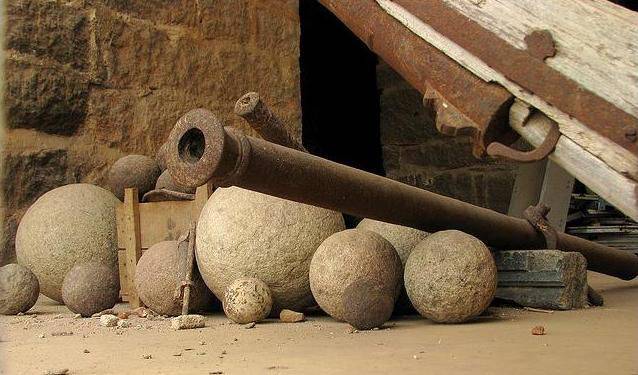 These are the stone cores used by the medieval Indians in order to shoot at their fortresses. Near the iron cannon miraculously missed the melting. 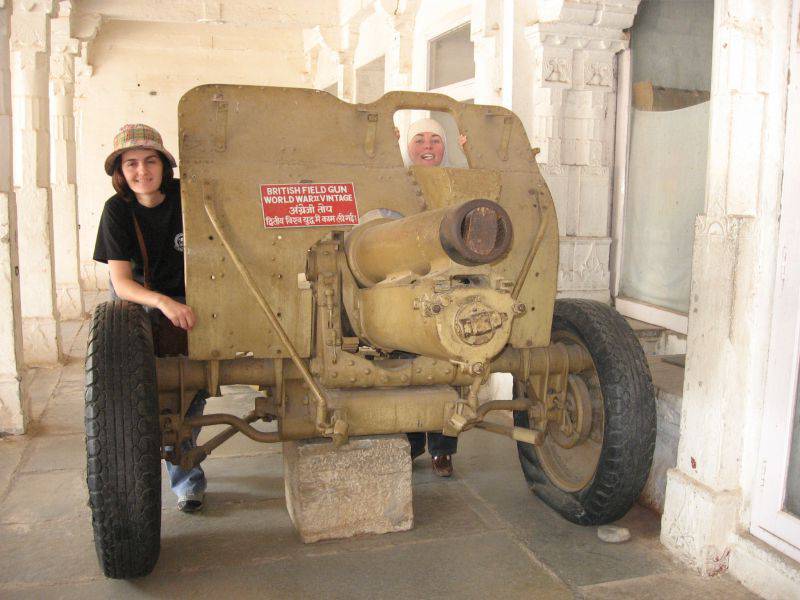 “But we have found another cannon for you!” Thanks, of course, girls, but only the “not that” cannon. However, in the Indian fortresses a lot of all English weapons.

Four lifting bridges lead inside, and there are warehouses, mosques, and 18 granite mausoleums. The acoustics of this structure are amazing, which, of course, the guides enjoy, attracts the attention of tourists: the clap of hands near one gate is audible a mile from this place! Well, the first of the Europeans was well-known to us Afanasy Nikitin, and not only visited, but also described Golconda. 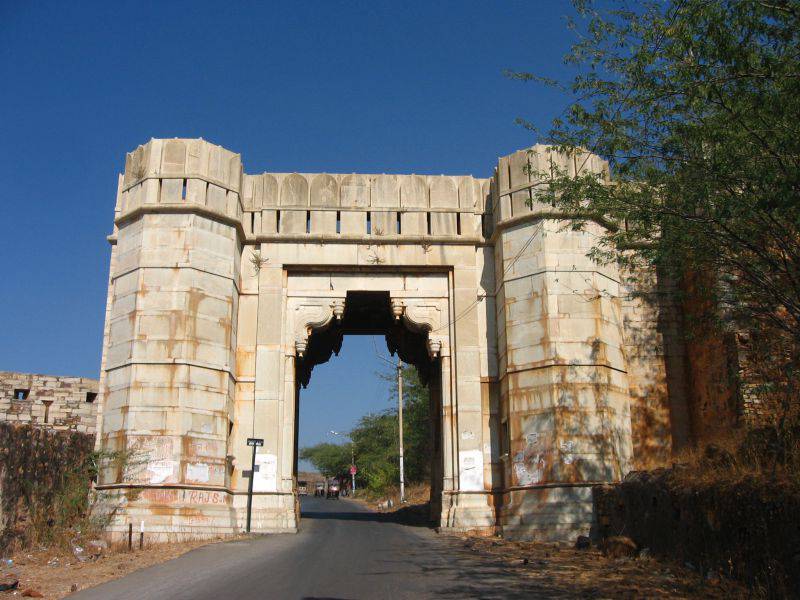 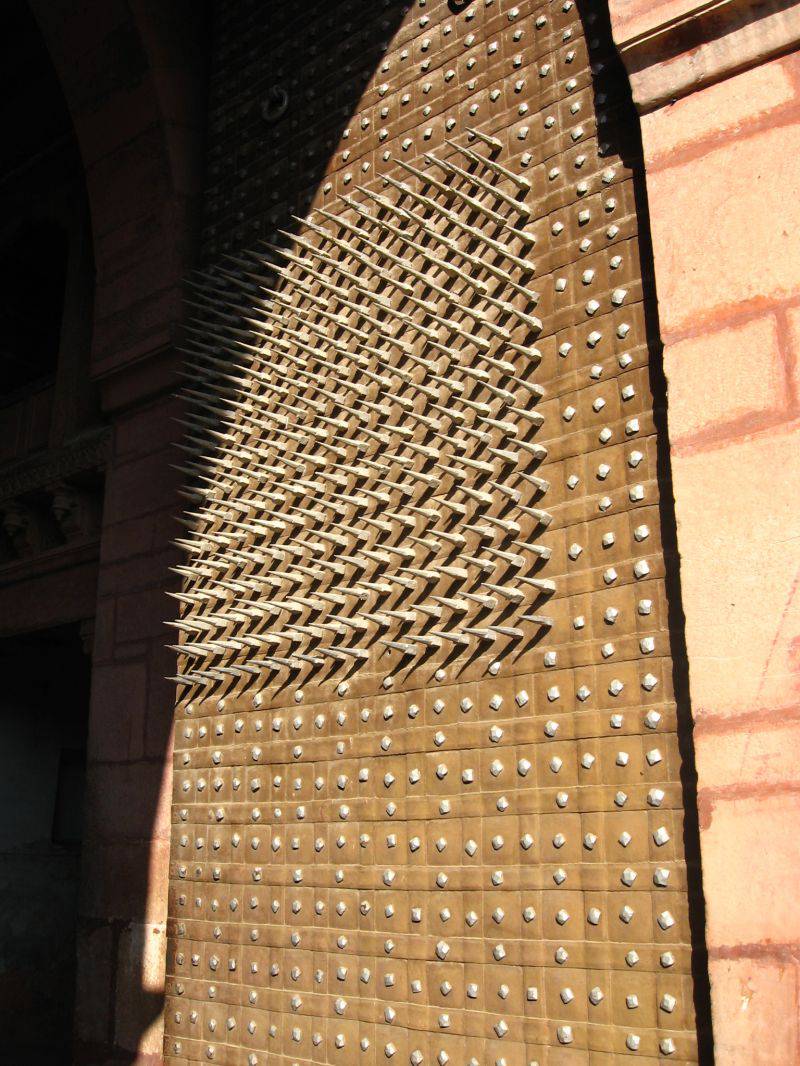 The most amazing thing is that with its huge size Golkonda as a whole is not at all an impressive structure when compared with other Indian fortresses. Whether the case of Mehrangarh Fortress is a Rajput citadel in the northwestern part of the state of Rajasthan. 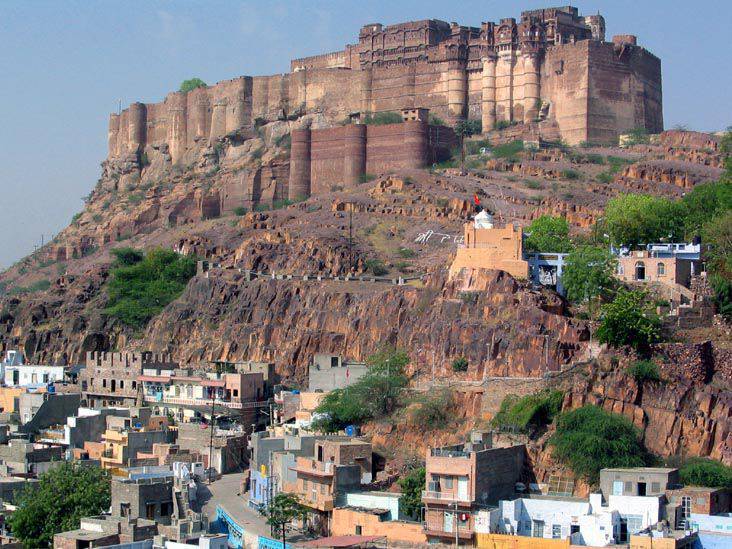 Mehrangarh fortress - as if growing out of a cliff. 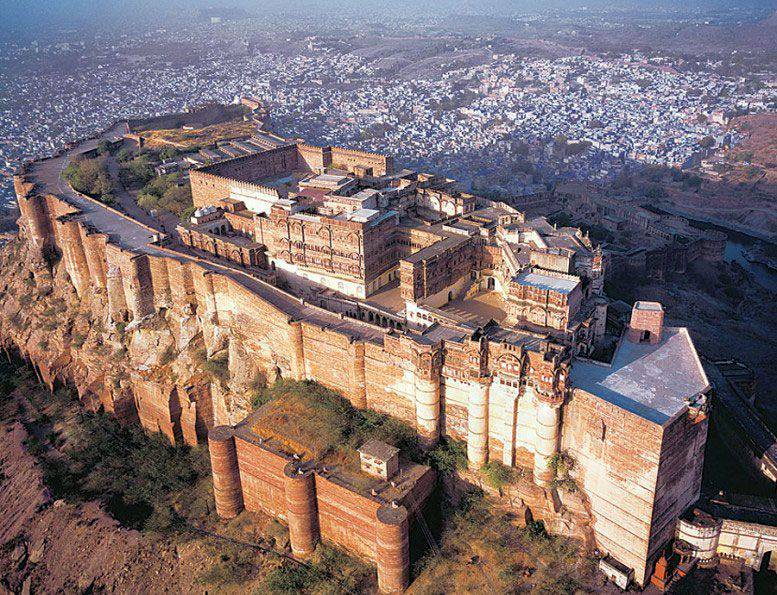 The top view of Mehrangarh is probably even more impressive than the bottom.

The fortress is located on high cliffs and when you look at it from below, the impression is that it is simply cut from the cliff standing on it. It seems that human hands are unable to build such a structure, and even with the local heat, but they have erected it. And when and how, and with whom - all this is precisely known. Began to build it in 1459 year, and finally finished only in the XVII century! 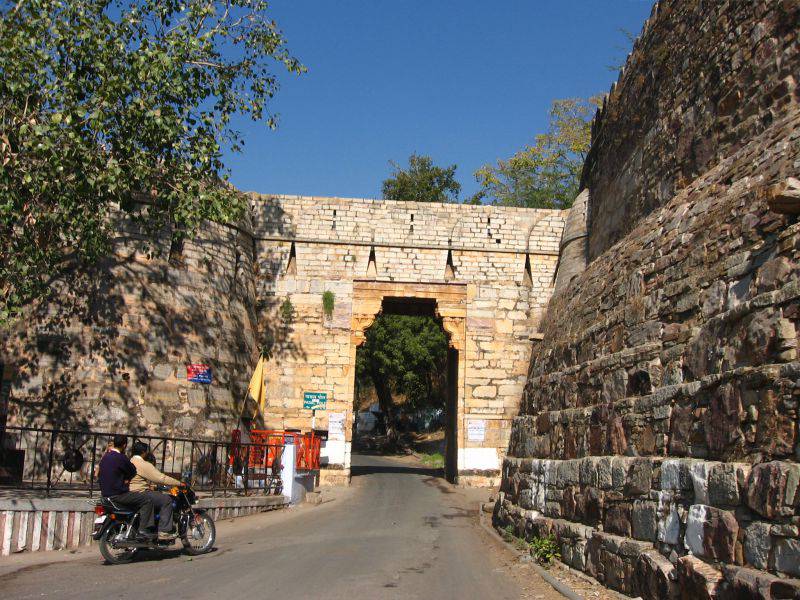 Another gate, and near the fortress wall.

The main gate to Mehrangarh is located in the Victory Tower - one of the seven highest towers that guard the approaches to the fortress. Behind it is a winding and steep road, around which there are walls with terraces of open arbours and living rooms with barred windows through which you can watch all who pass below. 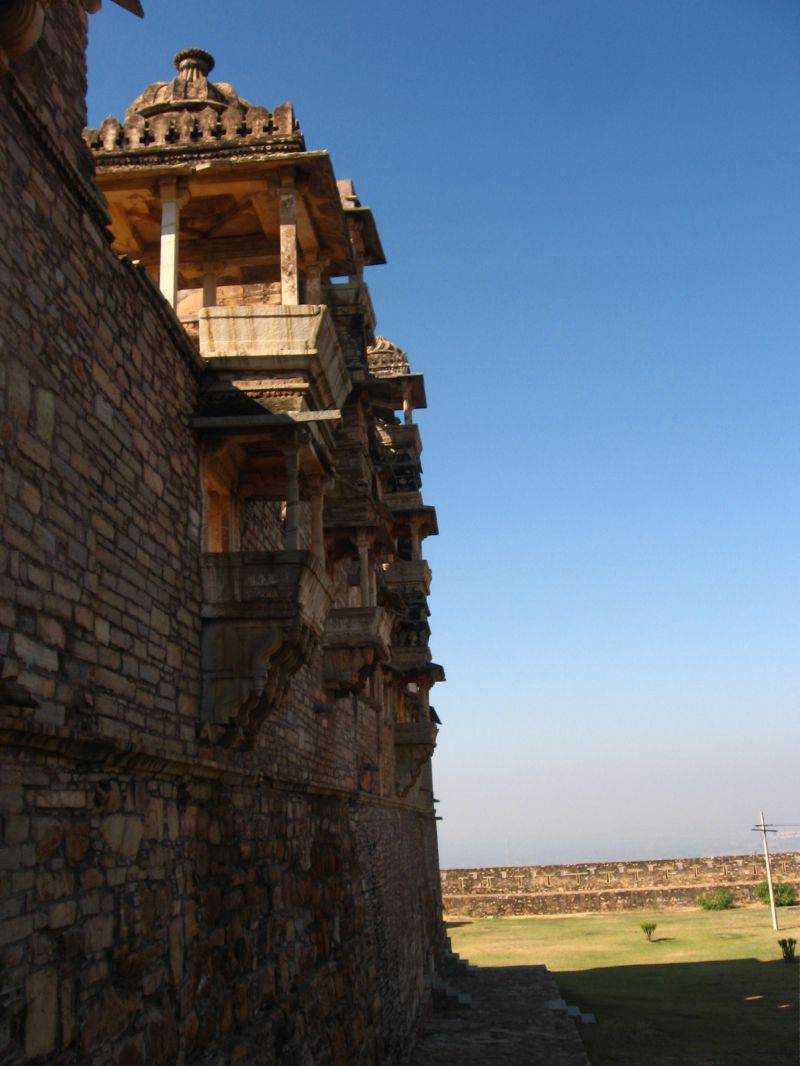 Wall, and on her gazebo.

The iron tower is famous for the beauty of the finish; The Pearl Palace is built of pure white marble, and the Throne Room itself, located on the topmost floor of the Palace of Flowers, is not at all inferior to the rooms that were intended by the Great Moguls themselves. 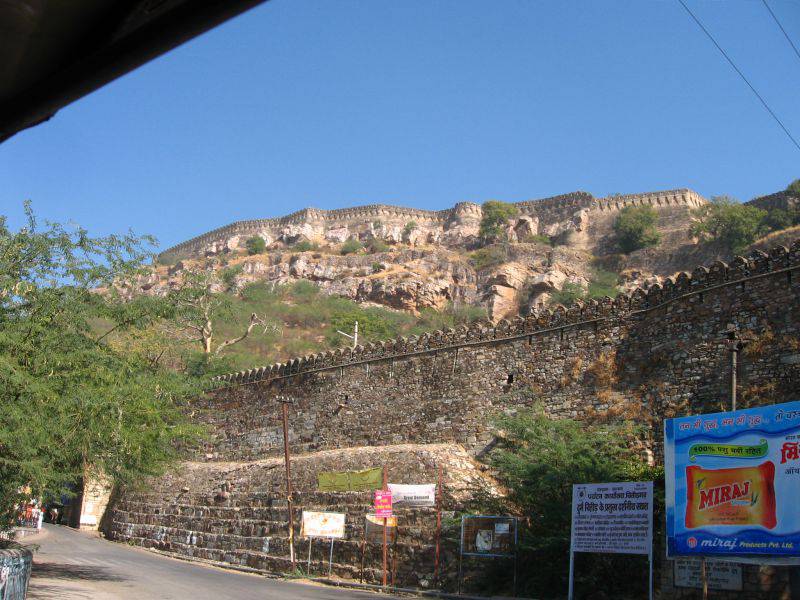 The fortresses of India - literally whatever you take, are very large in size, and seem to grow out of the steep slopes of the hills. The impression is that for their builders there was nothing impossible. However, neither aliens nor antediluvian civilizations helped them, but how they were built was seen by many European travelers. 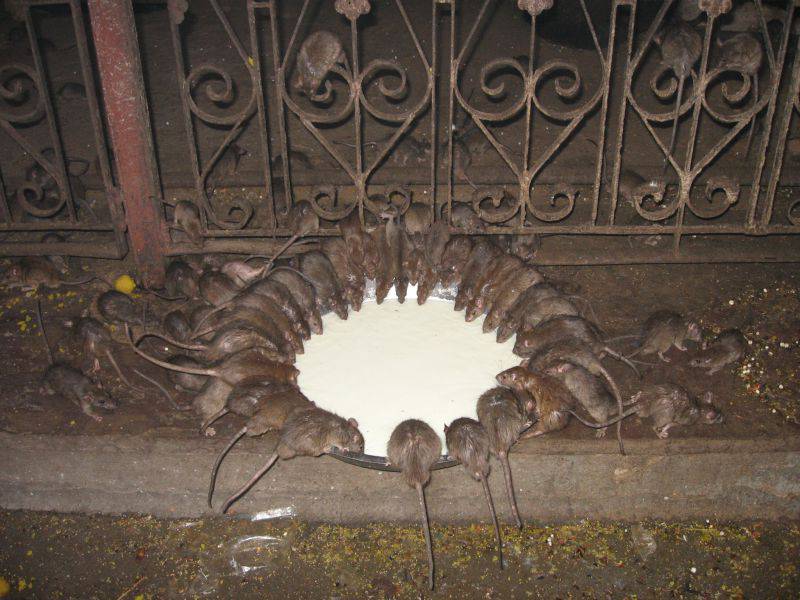 But this photo has nothing to do with fortresses, but it is very interesting. India has a temple ... rats! They are loved there, cherished and fed!

Ctrl Enter
Noticed oshЫbku Highlight text and press. Ctrl + Enter
We are
"White Rajah": as a British dynasty, a hundred years rule on the island of KalimantanThe history of military helmets in Western Europe: from the early Middle Ages to the early Modern Age. Part I
Military Reviewin Yandex News
Military Reviewin Google News
16 comments
Information
Dear reader, to leave comments on the publication, you must to register.