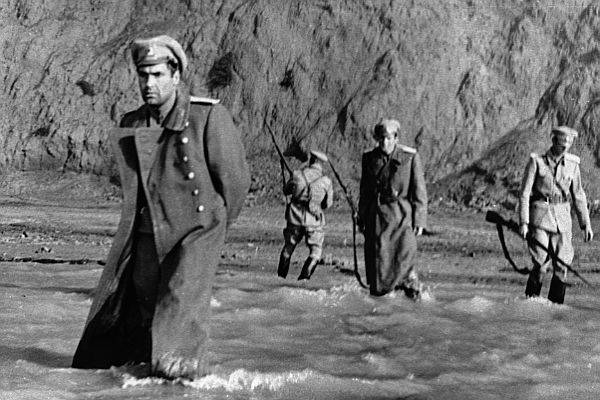 We left the Crimea
amid smoke and fire
I'm from the stern all the time past
in his horse shot ...

In November 1920, the remnants of the Russian army, General Baron Peter Wrangel, left the last inch of their native land and went into the unknown. Thousands of winners who believed in charity and remained in the Crimea still lie in the unknown graves of the peninsula ...

The White Army was evacuated to Turkey on 126 ships, which apparently remains the largest in the world stories marine evacuation. Russia then left the 145 693 man (including 50 000 soldiers and officers), not counting ship crews.

The Crimean exodus 95 years ago became one of the tragic pages of the history of our country, which today reminds of the cruelty and uncompromising civil wars. Few people know that one of the organizers of the evacuation, who saved tens of thousands of people from death, was a modest Russian general, Nikolai Nikolayevich Stogov. 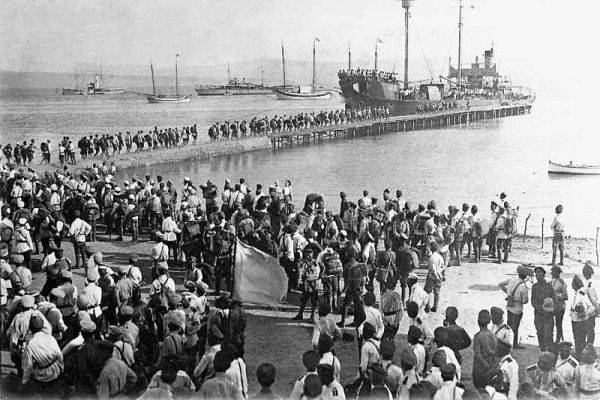 And so the White Army was evacuated from the Crimea in life. A photo:
Choice

By the beginning of the revolution, Nikolai Stogov was already fully established as a high-ranking officer of the General Staff. He was born on September 10 of 1872 in the family of a merchant of the Vyshnevolotsky Volost, Tver Province, graduated from the Nikolaev Cadet Corps (1891), 2-e Military Konstantin School (1893) and the Nikolaev Academy of the General Staff (1900). He began his service in the Life Guards Volyn Regiment. Subsequently, he served on the General Staff in the Warsaw Military District and the General Directorate of the General Staff. Participated in the First World War. In June, 1915, for bravery, was awarded the Order of St. George, 4 degree and St. George weapons. He served at the 8 Army Headquarters as Quartermaster General and served as chief of staff, commanded the corps. In the spring of 1917, he was promoted to lieutenant general ...

"We were met by a bewildered General Stogov ..." Some Bolsheviks, Mensheviks, he complained to me. “I’m used to counting you all, forgive me, traitors.”

By the revolutionary upheavals Stogov was wary. In 1917, the famous writer Viktor Shklovsky met the image of the general on the pages of his “Sentimental Journey”: “We were met by a bewildered General Stogov. He no longer understood anything.” Some Bolsheviks, Mensheviks, he complained to me. “I’m used to counting you all, forgive me, traitors.” I didn’t take offense at him. He was very hard ... he just felt hurt that his soldiers were fighting so badly. He didn’t have any influence on the soldiers, although they knew him and appreciated. "

The authorities, however, trusted the general. 10 September 1917, during the replacement of rebellious Kornilovites by more loyal commanders to the Provisional Government, Stogov took the post of chief of staff of the armies of the Southwestern Front, and from October temporarily served as commander-in-chief of the armies of the front.

And then it was time for a painful choice: with whom to be when the country and the army collapse? 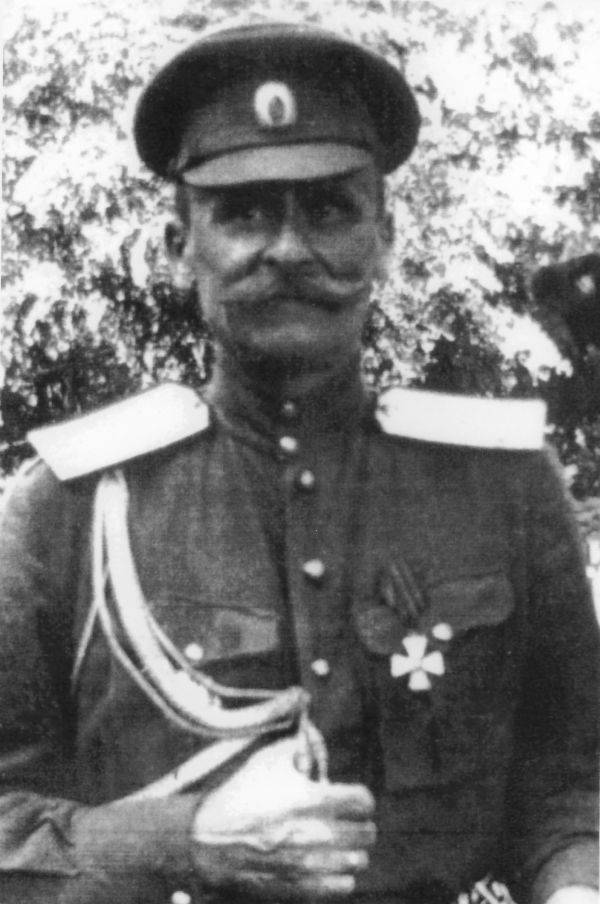 Military Officer of the Red Army

Finding no answer, Stag up to the spring of 1918, wandered from false documents. As Mikhail Bonch-Bruevich, one of the first generals of the old army who went to the red generals, recalled in the second half of March 1918 of the year, already in Moscow, a tattered man with a disheveled beard, run to the extreme by a man in a torn coat and, looking at me with red eyes for insomnia, as if checking whether I was this, he said unexpectedly:

8 May 1918, he became the first chief of the All-Russian General Staff - one of the highest governing bodies of the nascent Red Army. It is amazing that a monarchist and an opponent of the Bolsheviks fell on such a responsible post. Complaints of party workers fell on the former general. Polish revolutionary and commissar Ignatius Dzevaltovsky reported to the People's Commissariat for Military Affairs in the summer of 1918 that Stogov was “not a proponent of vigorous and energetic work for the Soviet Republic, but he did not believe in the creation of the Red Army as an illusion. For the existing system he looks like a temporary one and says that the Bolsheviks face the same fate as Kerensky. "

However, by some miracle, Stogov managed to keep afloat. The belligerent government urgently needed professionals.

According to the chairman of the Supreme Military Inspectorate Nikolai Podvoisky, "Stogov, good authority, a big man ... he is undoubtedly a man who does not believe in the regime or anything ... but I would not hesitate to take him to the inspection. First would not let out on such a role, but, ultimately, would have done so that he would work very productively. "

Bely General Petr Makhrov recalled Stogov’s story about life in Soviet Russia: “He was forced to join the Bolsheviks in the military. He had a large family: a wife and five children, of whom the oldest boy was twelve years old. We had to feed and clothe them. Life in Moscow for Stogov was extremely difficult, especially in the moral sense ... "

However, neither the red nor the white memoirists did not mention the main thing: in addition to the high official position in Soviet Russia, Stogov ... led the military organization of the National Center. That is, the anti-Bolshevik armed underground in Moscow.

General Stogov was the largest white agent in the Red Army. 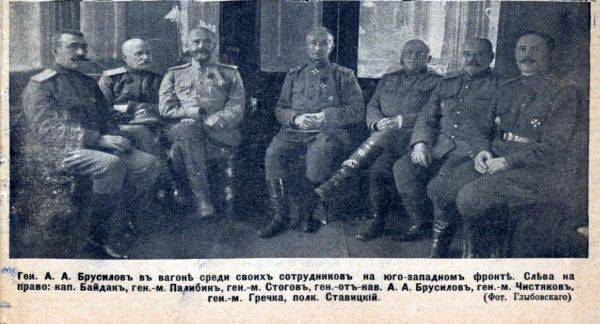 General A.A. Brusilov (fourth from left) with the headquarters of the Southwestern Front. To the left of Brusilov - General Stogov. A photo:
White agent

According to various estimates, up to four hundred people collaborated with the underground military organization, including a number of high-ranking military personnel. But in 1919, the Chekists gradually arrested the leadership of the organization, and then eliminated it. Hundreds of defendants in the National Center case were sent to prisons and camps, several dozen were shot. Lenin attached particular importance to the disclosure of this case.

However, with the head of the organization there was a slip. Either with the aim of tracing the reconnaissance contacts, or due to an oversight of Stogov, they were transferred from prison to a concentration camp, from where he safely escaped. The details of the escape became known recently, after the discovery by the author of these lines in the Guverovsky archive in the USA of the secret report of the general to the white command.

18 July 1919 year Stogov was transferred to the Androniyevsky monastery, which housed a concentration camp. And then - to the Ivanovo camp, where the regime was very liberal: prisoners could work outside the "zone". Stogov signed up for unloading barges with firewood, and later settled down to disassemble the library. 16 August he went home and did not return to the camp.

For two months he lived in Moscow illegally, hiding on the outskirts of the city (for example, for five days in the Perovsky workshop area of ​​the Moscow-Kazan Railway). At the same time, he did not stop the underground work, was preparing an uprising, which was supposed to begin when Denikinists approached. For this purpose, he established contact with deserters hiding in the Volokolamsk district of the Moscow province — at the beginning of September 1919 there were such people up to 6000 people. 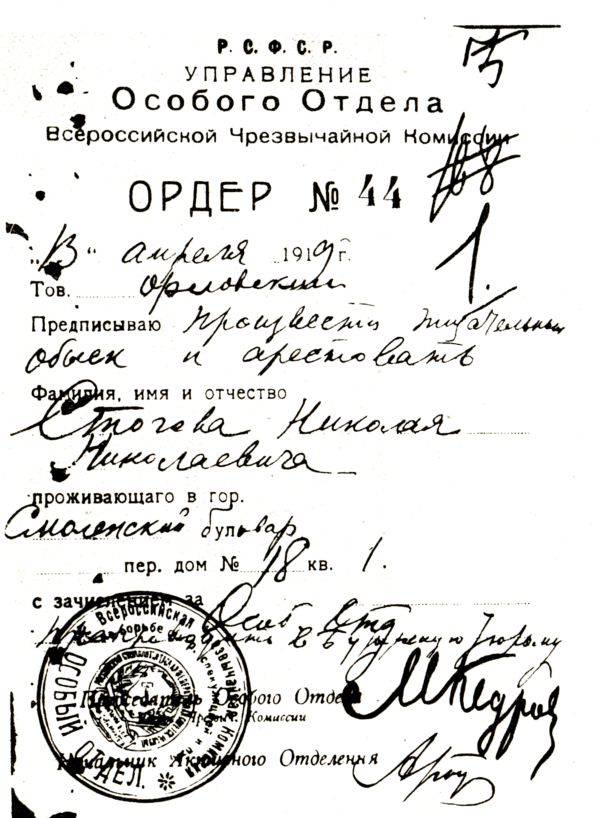 The arrest warrant for Stogov issued by the Special Department of the Cheka. 1919 g. Photo:
But they failed to incite them to the uprising.

Then Stogov decided to run. A good companion came up - Lieutenant Colonel N.N. from Kolchak's Stake, traveling to Denikin (his identity could not be established). Illegals left Moscow for Bryansk by train, and then made their way to the front line by train and on foot, moving south and south-west from Bryansk through Navlya and Zernovo, and then in the direction of Rylsk (the front line was held 25 versts before Rylsk). Having safely gone over to his own, Stogov reached Lgov, then from Vorozhba in the campaign car he arrived in Kharkov, after which he went to Denikin Headquarters in Taganrog.

According to Mikhail Bonch-Bruevich, "our big secrets of interest to whites, he (Stogov. - AG) did not know, and was not allowed to them. If he pursued this kind of espionage goals, he should more than one month to sit in the headquarters ... And yet he turned out to be a despicable defector. But I still can not exactly understand why he did it "8. 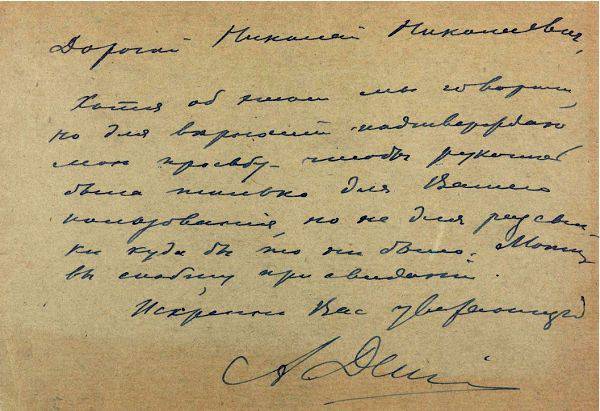 Letter from General A.I. Denikin Stogovu. Not earlier than 1924. Photo:

“I listened attentively to the monologue of Nikolai Nikolayevich and looked at his typical Russian face with an“ orthodox ”Russian beard, into his small eyes that shone with intelligence and kindness. Over the eleven months of our separation, he leaned over and lost weight, bearing - “vigorously and well done.” Only now his hair and beard were silvered. He was primarily a man of duty and an ardent patriot of Russia ... He dearly loved his "Orthodox" Russia, considered it above all "Basurman" countries, was deeply religious and church man. About he could not imagine Russia without the “pious and autocratic” and without the “Patriarch of Moscow and All Russia.” Any other Russia was perceived by him as devoid of soul. His whole being rested on the precepts of the old antiquity. However, it would be a mistake to consider him a retrograde. who knows Western ideas, but, paying tribute to them, he always said: “What is great for a German is death for a Russian,” General Mahrov recalled.

As noted by Colonel Alexei von Lampe, Stogov has aged very much during his stay in Soviet Russia. Constant nervous strain, arrests, interrogations ... There is information that the spouse of the general was executed after fleeing to the whites. She was arrested along with Stogov’s son, hitting a Cheka ambush. However, documents on this account could not be found.

At first, White Stogov was listed at the disposal of the head of the military department, then he held the position of chief of a fortified position near Rostov-on-Don, and was chief of staff of the Kuban army. Since May 1920, he was appointed commandant of the fortress of Sevastopol and commander of the army rear area. Here and found his outcome of the Civil War. 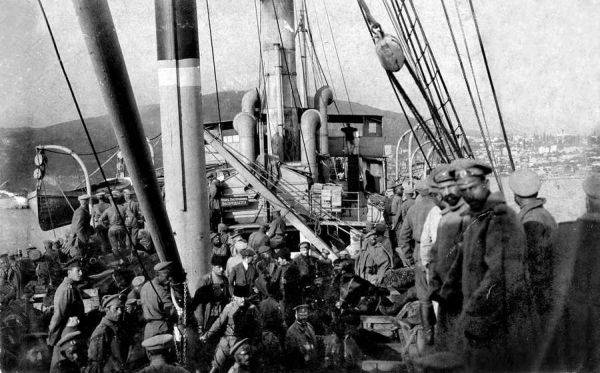 November 14 1920 of the year. Another ship leaves Yalta. A photo:
Parting

Nikolai Nikolayevich was one of the organizers of the evacuation of parts of the Russian army of General PN. Wrangel from Sevastopol in November 1920 of the year. Evacuation, thanks to the stewardship of Stogov, was carried out exemplary. As Wrangel himself recalled, Stogov and other leaders of the evacuation “all were at the height of the situation, with complete self-control, unrelenting exertion of forces, carrying out their work.” To protect the landing of the ships from a possible attack helped Junker Konstantinovsky Military School.

It is known that 15 November, the general left the city last. Less than two hours later, the Reds entered Sevastopol. Before leaving his native land forever, Stogov stopped, crossed himself and wept.

Stogov settled in Serbia, then moved to Paris. He worked at the plant, headed on a volunteer basis the military office of the Russian All-Military Union - the main military organization of white immigrants. Died

December 7 1959, buried in the Paris cemetery of Saint-Genevieve-des-Bois.

Until the last days, Stogov kept silence about his secret work with the Reds. Perhaps he was afraid to damage his comrades who remained in Russia. Even in 1938, he wrote to General V.V. Chernavin: "I can not say that, in my opinion, it is still far from the time to write" the whole story "16.