Dmitry Anatolyevich, will the roads lead to a full budget?

November 19 2015
99
Once behind all the fuss with the payment of Ukrainian debt, triumphant reports from Syria, anti-doping scandals, facts that do not affect foreign policy fell out of sight. But quite a concern to the inside. That is, simple Russian inhabitants. It seems to concern. 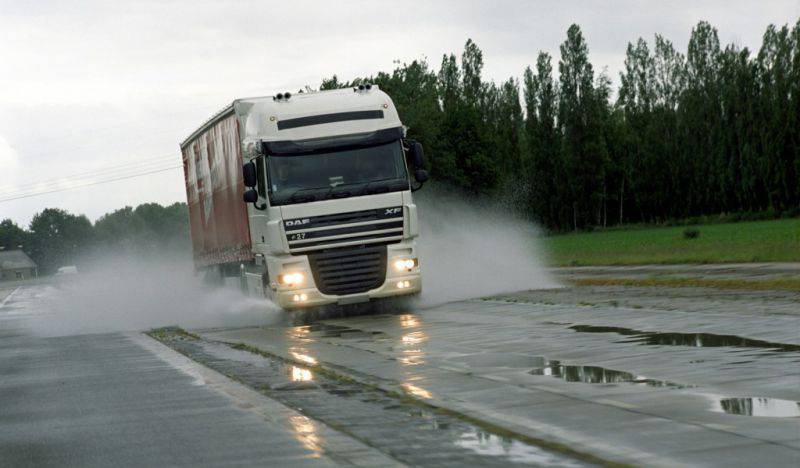 First made noise the law on the introduction of fees for the use of federal highways. On the one hand, the “go-pay” scheme is not a very bad thing. And the fact that they took up the truck, which just cause the roads the greatest damage, not bad. The idea itself is good. Let those who use them pay for road repairs.

However, do not forget which country we live in. And we live in Russia. And that is why I am not referring to this law with prejudice, but with the understanding that "they wanted the best, but it turned out as always."

That is why there is a firm conviction that behind the very quickly calmed "dalnoboev" you should only wait for a new round of prices. At best, by the way. At worst, it all depends on the greed of the carriers. 30 rubles or 33 per kilometer, taking into account the new burden - do you still pay to whom? That's right, the end user. That is us. Not in the rules of the Russian burden of budgets payouts. The easiest way to pass it on to the shoulders of these very end users.

So with the introduction of the final rate, it is worth expecting precisely price increases. Dmitry Leonov, Deputy Chairman of the Board of the Rusprodsoyuz Association of Producers and Suppliers of Food Products, believes that the greatest price increase (up to 15 percent) should be expected for bread and pasta - up to 15%, salt may rise in price to 13%, cereals - up to 7%, sunflower oil and milk - up to 5%.

The deputy head of Rosavtodor, Dmitry Pronchatov, states that there is no risk of a rise in price for goods:

“There is no reason to fear a noticeable rise in price for bread, flour, milk and other consumer goods in 2016. 12 toners account for only 8,5% of such shipments, and the bulk of the products transported on the roads — about 83% — are bulk materials. ”

It is clear that in Avtodor it is aware that who carries what and how. This I noticed with a fair amount of malice. In fact, that, where and how a huge army of private truckers-entrepreneurs carries, no one can calculate and really say. But for them the hard times really came.

It’s no secret that even private owners were driven into the PI, they were forced to write and submit reports to the tax department, but it is clear that all this was done accordingly. I have some experience of close cooperation with representatives of this tribe, so it is safe to say that any truck driver from 1,5 to 40 carries on the checkout only what is impossible to do. Cashless transactions with agencies or shippers. But it is clear that cash is welcome.

Now, with the help of all the innovations, you can easily and naturally track all movements of the truck. And on the basis of these data to draw conclusions on how this entrepreneur works. And, of course, taxed. At a profit.

The same applies to transport companies. All transport is obtained under the gun not only from Avtodor, but also from the tax authorities.

There is where to howl and start a protest.

Of course, talking about the fact that the launch of the "Plato" system will completely destroy the "gray" schemes can only be in schools. There they will believe. And Vano and Gadzhi both loaded kamAZ 25 tons of watermelons and will ship. As the driver stopped in front of the scales and ran to the inspectors, so he will run. And the roads from this will not be better for sure.

Who rode south on the M4, certainly remember the city of Pavlovsk. And huge "Tonary" with rubble. Pavlovskgranit, OJSC carries this rubble in such quantities that it is these three rubles - as an elephant. And the road? The consequences are visible. They are repaired every year. But “Tonara” continue to walk as if nothing had happened. And they will walk. Because the railway is expensive to carry.

But it is already completely different. историяour railways. Let's return to the federal highways.

Everything is easier with them. New tax on 12-ton trucks came up and put into operation. We are waiting for the results. It is clear that I am not talking about global road repairs (that the Saratov and Volgograd regions would not hurt). Money is not worth waiting for quickly, and the repair itself too. The money will go to the budget, this is understandable. But not directly, but through the operator. LLC RT-Invest Transport Systems (RTITS).

Naturally, the operator will, from the collected funds, pay for the maintenance of 100 distribution points of his Platon system, pay salaries to the apparatus and the inspectors working on the highways, contain a mass of vehicles for the apparatus and inspectors. I think everyone understood what I mean. About the appearance of another trough.

True, I hope that on the roads all the same something will remain.

Now a few words about the very budget to which this tax should flow. It is clear that with the budget everything is sad. And it is necessary to fill it. Even at the expense of road users, so that at least something fell on these roads. In the form of asphalt. Because my experience with the roads of the Saratov, Tambov and Volgograd regions says that it is a pity that there was no war there. You look, there would be an occasion to make them (roads).

But excuse me, do we really have nowhere else to take the money? It seems to me that there is.

Rosneft board members earned 9 billion rubles for 2015 months 3,253 of the year, follows from the company reporting under RAS.

Other rewards are services contracts, material assistance, awards and gifts.

In Rosneft, however, they believe that payments of other types of remuneration for 3 quarter of 2015 are due to the requirements of current legislation and do not exceed the same amount for the previous year. There was no significant increase in remuneration in the 3 quarter of 2015, the principal amount was generated in the 2 quarter of 2015. This effect was due to the payment of premiums for the implementation of significant projects, as well as the payment of premiums for awards. At the same time, the total amount of general and administrative expenses of Rosneft (legal entity) OJSC decreased by 11%. Salary payments for the 3 quarter of 2015 amounted to 150 mln. Rubles, which is less than the average quarterly payments for the 1 half-year 2015. . (197 million rubles. For the quarter).

That is, the salaries were lowered, it is clear that not to the management team, but bonuses that are taxed at a different rate were raised.

A big ship is a big voyage, right? No, it's good, of course, that Rosneft is developing and rewarding its employees for implementing "significant projects." Just why these projects in no way affect the price of gas for us, the consumers?

After all, no matter what happens in the world, our fuel prices have one reaction, like an amoeba - up. The price of oil has fallen, the dollar has risen in price, or vice versa - everyone is already used to the fact that the price of gas will only increase. Well, and behind it all the rest.

And who are these masters whose services cost us so much? For us - because Rosneft is a state-owned company. And works with subsoil, which according to Art. 9 Constitution of Russia belong to whom? That's right, the state. Do not people, as some naive.

Subsoil plots cannot be the subject of purchase, sale, donation, inheritance, contribution, pledge or alienate in any other form. Subsoil use rights may be alienated or transferred from one person to another to the extent that their turnover is permitted by federal laws.

Minerals and other resources extracted from the subsoil can be in federal state ownership, property of the constituent entities of the Russian Federation, municipal, private and other forms of ownership under the terms of the license.

That is, the property - from the state, but not from the people, and anyone can use it, and it can be obtained from not popular, but at least state, subsoil, in general, can belong to anyone.

Well, here it is, the state, represented by the top of Rosneft. To whom all this, apparently, belongs.

Board of Directors. Head, so to speak (http://www.rosneft.ru/about/board/).

Igor Sechin
Andrey Belousov
Andrey Akimov
Oleg Vyugin
Alexander Novak. This is a minister, true, but one does not interfere. In the state.

Nothing embarrassed anyone? Then go to the board, which was discussed initially. And then we here Ukrainians with might and main criticize for Abromavicius and Saakashvili ... Although we can, these are not in our ministers go.

In the summer, Rosneft reported that the company's board decided to index wages only for the labor collectives of subsidiaries. In this case, the indexation of salaries of employees of the central office will not be held, the Rosneft message said.

Well, you know, at such and such rates also index ...

And these miracle managers 11 last year earned 2,797 billion rubles. And then the crisis struck. And for the three quarters of this year, they earned 3,253 billion rubles. And no matter how the evening. For the remaining three months, exactly another billionaire will be pinned.

This, I think, is the spittle. And many will be more abruptly. Serdyukov? Vasiliev? Come on, kindergarten, the average group compared to these whales business.

And we wonder why gasoline prices are rising, and we have never received any clear explanation for this. Although we continue to shove the pistols into the tanks and draw money to the cashier. And here they are. Including.
This is not envy, no. I just can not imagine what can be done with such money. What to spend For I am an average Russian, and I cannot even see such figures in a dream. And good, I guess. I will sleep better.

Poke your nose in such cases - alas. Brain is not enough. But when our prime minister voices budget problems and tries to compensate them with another project at our expense, I would like to ask a malicious question: at the expense of the state in any way? Will these 11 super-managers die in agony if they don’t get that billion? Do you have to pay those who receive tens of thousands of times less?

Apparently, to be in Russia and to be in business in the state of Russia are very different things.

I don’t want to say that the idea of ​​taxes on roads and the Plato system is meaningless, like many others. But if we draw an analogy with the idea of ​​putting all dalnoboev on a tachograph counter, it will also die.

So is not it easier to look for money where they exactly have? In the pockets of Russian state managers. No, taxes by itself, but two billion is better than one.

And the last. We are very strongly convinced lately that the crisis and all that. It is necessary to wait, endure, everything will be fine.

Maybe we should start with yourself?

And then the moment is not far off when the main mass is really not enough triumphant reports from Syria and Ukrainian jokes.

Ctrl Enter
Noticed oshЫbku Highlight text and press. Ctrl + Enter
We are
About Stalin and KhrushchevWhat you didn't want to know about England
Military Reviewin Yandex News
Military Reviewin Google News
99 comments
Information
Dear reader, to leave comments on the publication, you must to register.