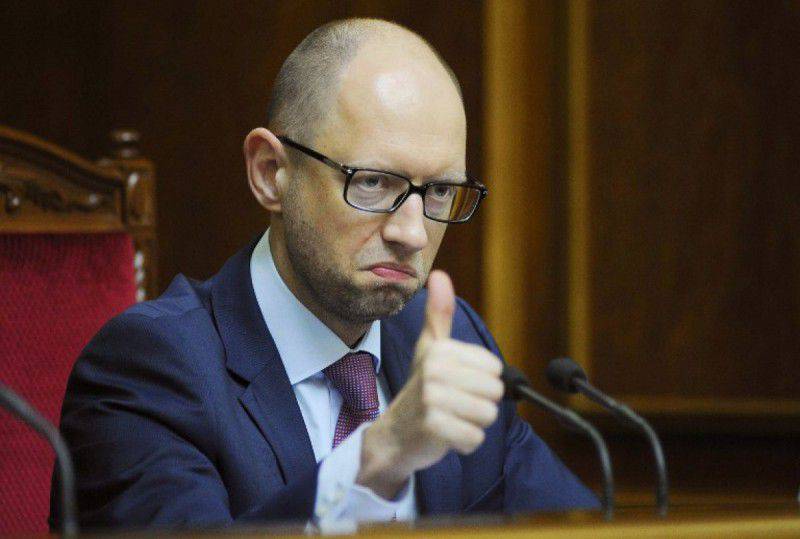 Most of the attention of enlightened citizens is taken by the president of the country, Petro Poroshenko of Ukraine. And, of course, deserved. Bearing a hard watch in such a responsible position, in such a difficult period for the Fatherland, he is certainly worthy of attention and encouragement. But it is impossible not to pay attention to his comrade-in-arms and, as evil tongues say, to Arseniy Petrovich Yatsenyuk, a rival on the Ukrainian political Olympus. For quite a long time he remained in the shadow of the head of the Batkivshchyna party, Yulia Tymoshenko. It seemed to many that he would be forever second: quiet, shy, low-key, hard-working and modest. But the hour came, and Arseny showed what he was worth. No, he did not flinch, did not retreat, and was not afraid.

Where, strictly speaking, was the future president of the Square - Petro Poroshenko, when Arseny, risking his life and his fragile health, opposed the dogs of the regime on the Maidan? “Where?” - we will ask in chorus and will not hear a clear answer from the lord of the president. Alas, many of the lofty ideals of the Revolution. Gidnosti were trampled into the mud, soiled by the unclean hands of those who cling to the victorious revolution, after it had won. But all this dirt passed Arseny, he remained standing like a white rock of Dover: pure, uncompromising and alien to the base passions. The symbol of the new Ukraine, which was yet to be created on the rubble, the corrupt pro-Russian regime of Yanukovych.

Arseny, as it were, embodied all the best and brightest features of the “little Ukrainian”, which was most of his short but honest life. The very “little Ukrainian” who in February 14 was not afraid of the atrocities of the secret police, was not afraid of the Kremlin’s threats, was not afraid of blood and death, the stench of tires and sniper shots in the back ... The very “little Ukrainian” turned out to be “a mouse, who snarled. " For many years he had been humiliated, rotten, deprived of bread and the “smart Mova”, will and dreams of Europe. But every kingdom of darkness comes to an end. The dark regime of Yanukovych was no exception. Neither the lured special services, nor the majority in the Rada, nor the billions of the Horde, left at the last moment to Yanukovych, like a dog’s bone, helped ... (How could a Ukrainian go so low? He was never Ukrainian!)

The kingdom of darkness collapsed and the sun of freedom rose: the chains of slavery crumbled into dust as if by magic. But there were no wizards here. There was a modest little patriot of Ukraine, but a patriot with a capital P. Not every great nation can hope that such a leader will come to its aid on critical days. Ukraine is fortunate how rarely some state has luck and rarely what capital. Arseny turned out to be the joker who beats any political ace. This puny bespectacled man with an uneven bite of large front teeth (the heavy legacy of the Soviet starving totalitarian childhood!) Turned into that very “secret Ukrainian weapon”, Against which all the intrigues of the enemies of the new Ukraine were powerless. Yes, they plotted, yes, they hatched plans, yes, they were ready to dig into the throat of the “little Ukrainian”, but Arseny was ahead of them! It is terrible to think about where Ukraine would be now, had it not happened on its way Arseny ...