The world wants to forget Ukraine. But Ukraine will soon remind of itself

November 18 2015
124
In recent months, the world has almost forgotten about the Ukrainian crisis. Some countries seem to have achieved something by their efforts to establish, albeit a fragile, but peace. Others, realizing that Kiev had practically no strength, suggested that the junta lay low and build up muscles. Still others are busy with completely different problems, and all Ukrainian events for citizens of these countries are akin to a serial. And the series, which is already tired of its predictability. 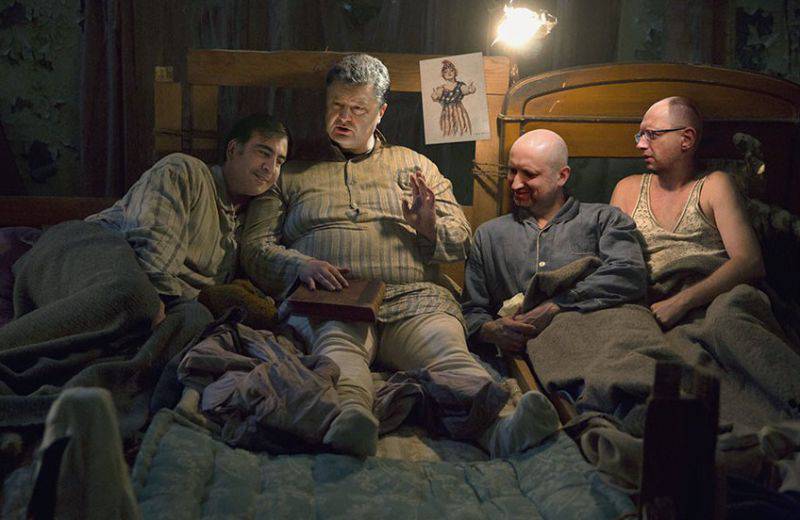 Today events in Syria, France or Egypt are much more interesting. This means that the views of not only politicians, but also of financiers, are turned there. Ukraine also gets the "scraps" from the master's table. And, alas, these leftovers are no longer enough even for the minimum maintenance of an acceptable standard of living.

Naturally, in such conditions, the Kiev government is forced to take emergency measures. And what measures can the government take today to increase the amount of funds in the treasury? Alas, no. The only way is to return to the state of the active phase of the civil war.

Why are there no other ways? First, the Ukrainian economy is increasingly acquiring the features of a banana republic. Industry kill is already open. When Kiev announced the suspension of military cooperation with Russia, the West applauded in unison. Of course, Russia will remain without components for its ships, airplanes, helicopters and other weapons. However, in a short time we were able to release something on our own, to purchase something from other suppliers. Something, again, alas, had to stop.

However, this ban hit Ukraine much more. Industry, more focused on Russia, in collapse. Plants on the verge of closing. It turned out that Ukrainian products in Europe are not needed. Suffice it to say that if last year in the Russian market, Ukrainian products amounted to about 4,1%, then this year it fell to 2,8%. And this decrease continues.

But the most unpleasant thing for Kiev is that Russia not only engages in import substitution, it finds new partners who are happy to master the new market. And what is to lose the market well know Georgian or Moldovan winemakers. Losing is easy. But to return to the same position is almost impossible. In simple terms: guys, and others took their places on the trading stalls, and all you have left is there, in the corner ...

But in the hope of Western investment, Kiev continues to bend its line. Breaks cooperation in other areas. And it is interesting, it makes round eyes, when Russia responds mirror. Remember the flight ban for Russian airlines. And Arseniy Yatsenyuk's lament about exactly the same ban from Russia. A hundred times the journalists used the anecdotal question: "And why should we?"

And now Ukraine is at the next round of deterioration of the situation. I am about introducing from 1 January 2016, the economic part of the Association Agreement with the EU. Russia repeatedly warned Ukraine that it would not allow sitting on two chairs, as before. It's one thing when a country is friendly. The other is Ukraine now. Your shirt is closer to the body.

Medvedev officially announced retaliatory measures. Embargo for Ukrainian goods. Russia must protect its market. And then began the arithmetic. As it turned out, with the introduction of the embargo, the loss of Ukraine would be just terrible for the economy. The country will lose from 160 to 220 billion dollars. Depending on what Russia undertakes.

The hopes of Ukrainians in European markets are also dying. During the period of the Maydanut revolution, exports to Russia fell by 60%, and exports to EU countries by 35%. And the Europeans are no longer shy to say that they do not intend to increase it. Economic cooperation is understood there as an opportunity to drain the surplus of their products on the new market.

And now secondly. Without war, it becomes difficult to keep society in the ideological yoke. An external enemy is needed. Fighting such an enemy distracts from other problems. People are willing to endure hardships for their homeland. Ukrainians (especially their noisy ones) are ready to endure hardships against Russia and Putin in particular. And the only way to save at least some kind of industry is to load the production capacity with military orders.

None of the analysts contented themselves with hopes that the crisis would be resolved simply by negotiations. Everyone understood that delaying the implementation of paragraphs of the Minsk agreements suggests that no one will fulfill them. War, as the final decision will still be. Only here it is necessary to delay the beginning. What if something happens to stop shooting ...

For Ukraine, the hour "X" should have come 20 December. This day was to be the day of death. The default and the defeat of the government. That is why fighters on the front line became more active. That is why shelling began. That is why Poroshenko allowed to respond to the shelling. Clearly prepared the ground for provocation. Obviously, the provocation itself was being prepared. It was necessary to blame LDNR for breaking the Agreement.

In ukroSMI constantly hysteria. Daily shelling, the death of soldiers, the solemn funeral of the dead. And under this sauce the return of heavy weapons to the position. And do not hesitate to OSCE monitors. On the contrary, informing them in advance about this.

I do not want to detract from the power of the Armed Forces of the People’s Republics. Over the past months, a great deal of work has been done there to streamline the armed formations. New fighters and commanders were trained and sent to serve. Some parts are dissolved or reformed. Theoretically, all this should strengthen the army. Probably strengthened. But...

Care in the reserve of many of those who started this confrontation, played a negative role. What I will write now is not only my personal opinion, but also some other experts. I doubt very much that now the LDNR army is capable of restraining ukrochasti on bare enthusiasm. As it was last year. Professionalism on the wrong side has a competent calculation of their own and others' capabilities. Among the pros is impossible feat 28 Panfilov.

Simply put, today, in their fighting spirit, the armies became equal. And in quantitative and qualitative comparison, the Ukrainian army is superior in times. According to some information, there are now approximately 200 thousand fighters in the ATO zone.

Yes, there are nuances in the form of the National Guard under and terbats. These formations are not suitable for conducting full-fledged hostilities. But even if they are deleted in the first days of the war, even the remaining part is much larger than the size of the Armed Forces of the LDNR.

The beginning of a new active phase of the war will lead to huge losses from the republics and, ultimately, to a lost campaign. And I do not see anything that could save the republic from defeat. Even with increased assistance from Russia. It could have ended by the new year.

The situation is aware of everything. At both sides. The defense strategy developed by LDNR is no longer working. For the offensive of the same forces and means is clearly not enough. A situation where, as we say, do not throw it, a wedge is everywhere.

And here, as is often the case, Russia is making a strong move. 16 November, Vladimir Putin announced the final rejection of the Ukrainian plan to restructure the state debt of Ukraine. But here he offers his own version, which is not only attractive for Kiev, but is at times better than what the IMF has proposed.

The redemption of Eurobonds for a total amount of $ 3 billion can occur in stages - at $ 1 billion per year in the period from 2016 to 2018 a year. At the same time, Moscow is waiting for guarantees from the US and the EU on restructured debt. “We made, in my opinion, an unexpected offer to our partners. We did not just agree to restructure the Ukrainian debt, but we offered better conditions than the International Monetary Fund requested from us, ”Putin said.

If the option of military confrontation is losing, then the enemy can be bought. What the Kremlin is doing now. I foresee tomorrow's howl of patriots about rescuing the junta again. Because I answer immediately. Today's offer is really salvation. But not of Kiev, but of Donetsk.

Today's war of Novorossia and Ukraine is first of all a war of finance of those who support the warring parties. Russia and the West. And here clearly the advantage is not on our side. This should not be forgotten. Russia holds the Donbass. The question is how long and how effective.

Somewhat encouraging is that the EU is already tired of "fighting" for Ukraine. His problems above the roof.

It seems to me that such an offer was made not only by Russia. This proposal is from Russia and the EU. Not without reason, it appeared after the visits to Moscow of quite serious EU and IMF officials. Let's see, on which 1 January 2016 of the year agreed.

Today, it can be stated that the danger of the start of a new phase of the war has been postponed again. How long?

Ctrl Enter
Noticed oshЫbku Highlight text and press. Ctrl + Enter
We are
On the "new Ukrainian" weapons received by equipping the Armed Forces of UkraineResults of the week. “You are already indebted to the sea: neither the bottom nor the coast”
Military Reviewin Yandex News
Military Reviewin Google News
124 comments
Information
Dear reader, to leave comments on the publication, you must to register.