November 18 2015
61
The press writes about diplomatic coordination of the visit to Moscow of Saudi King Salman. This indicates, according to foreign experts, that Riyadh is ripe for a “compromise solution” on Syria and Bashar Assad. The visit of the king can take place at the end of November. There are also rumors of things to come. armory a deal between Russia and Saudi Arabia worth up to $ 10 billion. 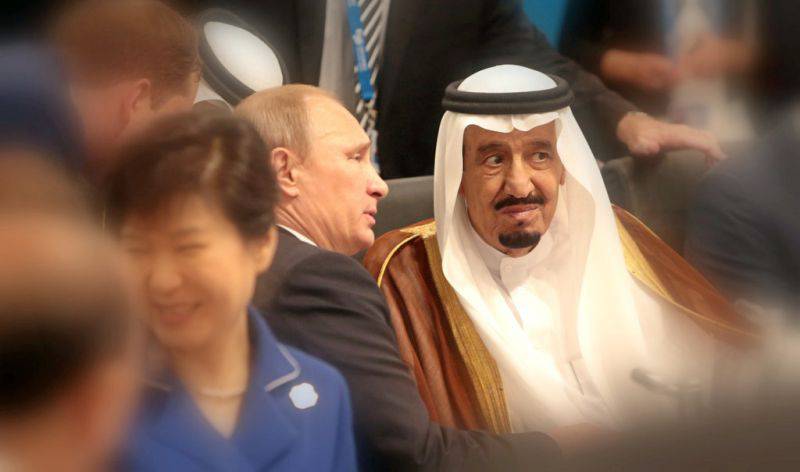 According to LiveLeak.com, reports about the likely visit of the King of Saudi Arabia to Russia show: the adventure of Riyadh in Syria is coming to an end.

According to the press secretary of the Russian president, Dmitry Peskov, LiveLeak.com website notes, King Salman’s visit to Moscow is currently undergoing coordination through diplomatic channels.

This shows that Riyadh is ready to abandon its former aggressive decision regarding the Syrian crisis. To explain the refusal is not so difficult: the attempts of the kingdom to act in Syria did not lead to success. It’s not at all necessary to talk about the coming "victory" of Saudi strategists. In addition, the forces of the Saudis are at the limit: an effect also occurs in the operation in Yemen.

Wanting to continue to play a central role in the region, the Saudi royal house seems to be “making serious efforts”, trying to “bring relations with Putin's Russia to a completely different level.”

Analysts say that the economic situation in Saudi Arabia is sad: the monarch’s treasury risks deserting, and the Arab “welfare state” may simply be bankrupt. This financial hole, this commodity economy closes petrodollar savings. The budget deficit of the monarchy this year, according to forecasts, will be 21,6% of GDP.

And expenses are growing. There is war, there is war. And in the summer of this year, the Saudi Arabian Monetary Agency was forced to withdraw 70 billion from assets in foreign investment funds. It can be assumed that this is only the beginning of the return of capital to their homeland.

The Saudis are not alone in their losses. Their regional allies, too, apparently, fall out of the category of those who could be considered “strong”. The total budget deficit of Middle Eastern oil-exporting countries in the next five years could reach 1 trillion. dollars.

This is where the "friendliness" of Saudi Arabia in relation to Russia takes root. But quite recently, when Russia launched the first air strikes in Syria on the positions of terrorists, Saudi Arabia condemned these attacks as a "reactionary" policy and considered them potentially "counterproductive."

Now, apparently, the Saudis thought better of it. In addition to the coming visit of the king, the statement of Prince Turki al-Faisal, the former ambassador of Saudi Arabia to the USA and the former chief of intelligence of the kingdom, speaks about the new strategy. He openly expressed confidence that “Russia's strategy towards Syria is more effective than the actions of the United States,” and that the Russian point of view on policy in the region requires “attention and respect.”

Meanwhile, Moscow’s views on Syria and B. Assad as the legitimate ruler have not changed since the beginning of the conflict in 2011.

You can’t say it about the Saudis.

Recently, Riyadh issued a “secret document” distributed to the embassies in the Middle East. Diplomats were instructed to stop financing the so-called Syrian rebels. This means that the house of Saud is no longer the main goal in Syria to overthrow the Assad regime.

Such a trend, analysts say, if it only continues, will be one of the main positive steps in the region aimed at achieving peace. After all, Saudi money previously went to finance numerous terrorist groups that tried to overthrow the Assad regime. So it was during the reign of King Abdullah and the intelligence chief Prince Bandar. It is these figures that are responsible for the war against B. Assad.

Later, when Salman came to power, Bandar was fired, which in itself was a hint of changes in Saudi Arabia’s foreign policy. The changes became “official” when the Minister of Defense of Saudi Arabia visited Russia (in the middle of 2015 of the year).

The current Saudis to “constructive engagement” is due to economic factors. The monarchy is “very interested” in the discovery for itself and for the regional allies of the “doors” leading “to the global infrastructure”: here both China and Eurasia (Russia and the states of the Eurasian Economic Union).

Such a development (if only Riyadh follows this path) would be much more positive than the financing of thousands of terrorists, who, of course, later hit the same Saudi Arabia and its allies. (Unless, of course, they are allowed to win in Syria and Iraq.)

This political shift also shows that the Saudis are much more interested in supporting their economy through the oil union with Russia, rather than putting sticks in Moscow. Cooperation with Russia is also beneficial: an agreement with Saudi Arabia can provide additional oil revenues in the amount of about $ 180 billion per year.

Obviously, Saudi Arabia, like Russia, needs a higher price for oil on the world market. In these conditions, the Saudis cannot achieve a higher price by “not taking on board” Russia and Iran.

It seems that Riyadh made some conclusions from the chaos that he himself had generated in the Middle East.

The “deal of the century,” which is reported by Russian media, would also help the Saudis to “become friends” with Moscow.

As 11 broadcast on November TV channel "Star", for the possible visit of the head of Saudi Arabia in Moscow is preparing a package of contracts for the supply of weapons to the kingdom worth up to 10 billions of dollars.

Earlier, the head of the Ministry of Defense of Saudi Arabia, Mohammed bin Salman, visited the Army-2015 forum and the St. Petersburg Economic Forum, where he expressed interest in Iskander missile systems, the TV channel reminds.

Reports of the proposed transaction appear in other sources.

Salman Ibn Abdel-Aziz Al-Saud’s visit to Russia is preparing a package of contracts for the supply of weapons to the kingdom worth up to $ 10 billion. He told the newspaper "Vedomosti" top manager of one of the Rostec enterprises; The same information was confirmed by a source close to the management of Rosoboronexport.

Nevertheless, Russian experts have conflicting opinions on this matter.

The interlocutor of Vedomosti, close to the leadership of Rosoboronexport, does not believe in the reality of a major transaction: after all, the United States and the United Kingdom dominate the Saudi market.

The chief researcher at the Institute of Oriental Studies of the Russian Academy of Sciences, Irina Zvyagelskaya, told Vedomosti that arms deals between Russia and Saudi Arabia can be concluded despite disagreements on the Syrian issue: “It's one thing politics, the other is security. Pragmatism can prevail here. ”

At the end of November, we add from ourselves, it will become clear from where (and where) the wind is blowing. In any case, Saudi Arabia, with its lean oil budget, is no longer able to generously finance the militants fighting against the Syrian government. In addition, Washington’s overseas ally of the Saudis no longer insists on “leaving,” much less overthrowing Assad. The other day, Barack Obama even spoke about the “importance of military efforts” of Russia in Syria. He did this at the G20 summit.

In such circumstances, it is unprofitable for the Saudis to fight on two fronts: to feed “rebels” with money and weapons and to fight against the Hussites in Yemen. No wonder the American generals have already noticed that Riyadh is not eager to actively fight in the American coalition against the IG in Syria. Riyadh simply does not have enough strength for everything: Assad, "IG" and Yemen - this is too much. And oil is getting cheaper ...

Observed and commented on Oleg Chuvakin
- especially for topwar.ru
Ctrl Enter
Noticed oshЫbku Highlight text and press. Ctrl + Enter
We are
Iran in the Syrian conflict. The confrontation with Saudi Arabia and the interests of the ShiitesSaudi Arabia is preparing for a big war
Military Reviewin Yandex News
Military Reviewin Google News
61 comment
Information
Dear reader, to leave comments on the publication, you must to register.