Publication "Roads №1»Caused an ambiguous reaction of VO readers. But it is very significant that “FOR” 11 votes, “AGAINST” 5, but “comments” to it were 90! That is, the factual side of the matter was unknown to the majority (and it would be strange if our people started to read Pravda from 1921 to 1940 a year, for no reason at all), but people actively expressed their opinions. But an opinion not based on knowledge is worth a little. No wonder it is said that in a war every general believes that the main blow falls on him. It is the same in peaceful life: one experience shows one thing, and documents and newspaper articles are often completely different. Therefore, it is worthwhile to get acquainted with the sequel to get even more information, and, accordingly, food for thought. And it is possible that someone will even get into the library and open the dirty yellowed pages of old newspapers on his own ... 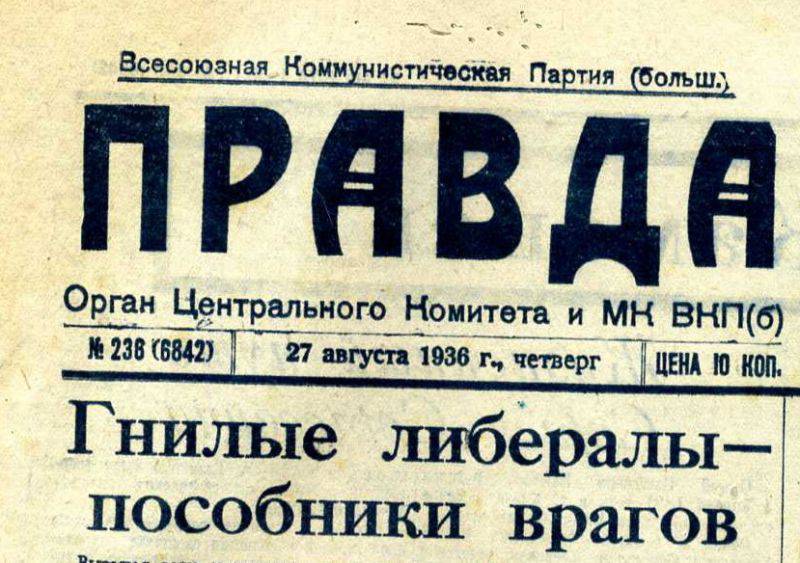 The tradition to scold liberals is as old as ... Pravda!

As for the “road number 2”, along which the Soviet press advanced from 1921 to 1940 a year, it is also associated with publications telling about life in capitalist countries (although it is clear that life in the USSR was the main theme). However, their tone differed sharply from articles of a political nature, and it was from them that readers could get at least some real information about life abroad. The content of these materials concerned, above all, the achievements of Western science and technology. And here we will also see clear contradictions in informing Soviet citizens from the “most truthful press” in the world.

The fact is that since the 1923 of the year, headings called “Science and Technology” have appeared in central and regional print media, telling about new developments not only Soviet, but also foreign scientists. The tone of the articles was purely neutral. Absolutely no attacks on the realities of life abroad they contained.

On the pages of the central and regional press one could see publications about the achievements of Western science in the field of technical acoustics, organ transplantation, wireless telegraphy, discoveries and the latest technical developments, etc. Newspapers wrote that in the enterprises in America, it became possible to “replace people with machines”, each of which “performed the work of at least a dozen people: for producing addition and subtraction, calculating profits, compiling bills and a monthly report”. Surprisingly, in the country covered by the economic crisis, which was written on the front page, the last one reported that “literally every month more and more new devices are thrown onto the market, replacing 5-10 labor with one machine, which the most ignorant worker".

From the content of articles on the latest developments of Western science, including reprints from the journal Popular Mechanics, Soviet citizens learned that foreign scientists are interested in the USSR and create scientific societies for the study of the Soviet state. In Switzerland, for example, “the“ Society for the Study of Russia ”was constructed. Moreover, it should be emphasized that often all these events took place just at the time when the “threat of war” with capitalist countries, judging by other publications, was catastrophically increasing.

For example, in the 1930 year, when our newspapers wrote on the front pages that “the pre-crisis position of the American workers is lost forever, the movement can only go through enormous deterioration,” according to their own reports in the United States, “ultra-long-distance photography” was carried out. Farmers used a disc plow-harrow, which “greatly improves labor productivity”, grew “sweet lemons”, and ordinary people could buy “a cheap and convenient apparatus for shooting a movie (so in the text - by the authors) and demonstrating them at home.” But in Germany at that time they started to produce glass wool, made progress in the field of radio aviation and used the newest street cars, “performing work not only on simple garbage collection, but even on washing the bridges”. That is, on the one hand, everything literally fell from starvation, and on the other, they created cars to wash the pavements, and for some reason the Soviet press did not notice these inconsistencies. Moreover, the theme of washing streets in the West, as was popular in Russian pre-revolutionary newspapers, so smoothly flowed into the Soviet press!

That is, the average man who read Soviet newspapers could easily conclude that not everything is so bad there if science had achieved such success. And again, in comparison with the materials on the life of the common people, the tone of articles about the novelties of technology remained neutral. This can be seen even in the publications on new developments in the field of science and technology in Germany, where the “Foke Wolf aircraft factory” (in the text - authors) in Bremen released a new model of the FH-200 “Condor” aircraft. The aircraft is all-metal construction and is adapted to fly at high speeds over long distances. It is equipped with four engines, but if necessary it can fly on two engines. The aircraft’s crew consists of two pilots, a radio telegraph operator and a navigator. In addition to the crew, the aircraft can carry 26 passengers. The average speed of the aircraft - 345 km per hour. Maximum - 420 km. Fuel consumption - 9 liters per hour. With two engines, the aircraft can reach speeds in 200 km per hour at an altitude of 1.000 meters. The radius of the aircraft - 3 thousands of kilometers, the ceiling - 4.000 meters. " As can be seen from the above example, no comments were made regarding the goals of creating a new model of the aircraft, just its technical characteristics and parameters were communicated.

Within a few months before the start of the Great Patriotic War, Soviet newspapers published laudatory articles about the significant successes of the German army in rearmament, and in particular that in the German army "favorable results were achieved when using silent engines on airplanes." These motors were so technically perfect that even at the maximum rotor speed they produced “no more noise than an electric car”. In addition, “the German radio company Telefunken patented a new communication system,” the properties of which “make it possible to use infrared rays to secretly transmit telephone and telegraph signals between ships at sea, between planes and the ground, etc.”

In general, this was characteristic of all the materials of the Soviet press concerning new inventions and the achievements of foreign science in the field of technical progress. Here, for some reason, the Soviet press clearly reduced its agitation fervor in criticizing everything Western, which immediately caused a clear contradiction in the perception of information about life in foreign countries: on the one hand, almost all segments of the population, except the ruling elite, lived in inhuman conditions, on the other - science and technology is constantly evolving. And it would be fine if they only developed ... They were consumed!

This tendency to cover foreign events continued until the very beginning of the war. For example, from the publication 1940 of the year, on the practical application of such a "miracle" of modern science as "Nylon" Synthetic Fiber, one could see a significant difference in the standard of living in our country and in the USA. There, "stockings and other knitted goods made from new nylon fiber, whose raw material is coal, air, and water, went into mass sale." Further, it was reported that not only Americans were so lucky, because "the production of nylon on DuPont patents begins this year also in England and Italy." In addition, "in the United States, another chemical trust has launched the production of synthetic fiber called vignon, from vinyl resins made from acetylene." “A similar fiber is produced on a large scale in Germany under the name“ pece ”fiber (from the initial letters of its German chemical designation polyvinyl chloride) and that it has high resistance against chemical reagents, rotting, and has high insulating properties. These fibers are currently used mainly for the manufacture of technical fabrics. According to the American press, they are widely used in Germany for the manufacture of parachute fabrics. ” Well, and make sure that it was not a fiction Soviet citizens could have in a year, when parachutes from this very fabric opened over our country, and all the distortions in informing turned against us!

It should be noted that a similar tendency was also characteristic of publications of the regional press, after analyzing which one can find the same inconsistency. For example, in 1940, the Penza newspaper Stalin's Banner, following the central newspaper Pravda, reported the plight of workers and peasants in Western countries *, but materials still appeared on its pages objectively telling about technological innovations in the Western world. If you carefully examine its materials, you get an interesting and controversial picture. On the one hand, the newspaper wrote that, for example, the “Terror at the Ford Plant” was deployed in the United States, that at the enterprise “the workers ... were beaten up and terror”, “the factory developed a whole system of espionage and provocations directed against members union. " On the other hand, on the fourth page of the newspaper in the “Science and Technology” section, readers could learn that in the United States in 1939, the “first windowless plant in the world” was built, in which “all the workshops ..., as well as the design office and the factory office is located in the same building without partitions. Convenient installation provides the same temperature, humidity ... regardless of the weather or the season. In an hour, the volume of air in a building changes approximately 5 times. Fluorescent lamps fill workplaces with an even light, almost without shadows. The walls of the building, made of special material, and the ceiling, insulated with a cork, so soften the noise that it does not interfere with employees and even laboratory workers. ”

And one conclusion, which the reader himself could already have made, that the working conditions of the workers in this country of “brutal capitalism” are not that bad at all. Moreover, our workers at this time could not even dream of anything like that! And even a plane-car is the latest 2013 of the year, and it first appeared in the United States, moreover in the 1937 year, which our newspapers immediately reported! As if it was impossible to keep silent about it? And it is impossible to write about the plight of workers in the same United States and at the same time about the automotive industry developed in this country and the achievements in agricultural technology. It’s impossible, well, if only because even the most “simple” people would inevitably have to ask the question: “And who then uses all this if the workers and farmers are starving there all the time ?!” Well, they would give this information to technical specialists, at work, in collections of chipboard. But on the one hand it turns out “we, the besieged fortress”, and “the world revolution is knocking on the door of the West”, and on the other - the apparent contradictions between the content of the first and last pages of the newspaper. Meanwhile, any “fortress”, good or bad, must be able to defend itself. That is, the information flow existing in it, at least, should not contain contradictions!

* Speech by A.A.A. Voholy at the Extraordinary Fifth Session of the USSR Supreme Soviet. “This was an invention in Western Ukraine - splitting a match into four parts in order to save!”
Reproduced by: The reunification of the Ukrainian people in a single Ukrainian state (1939 - 1949). Collection of documents and materials. Kiev. 1949 year.
(Authors' comment: try to cut the match into four parts yourself. For two, yes, for four it will not work. Someone will say that then the matches were thicker. No, the standard of the Swedish match was always the same! Many, by the way, read This, tried to do so at the time. Did not work!)