November 18 2015
26
Recently, US Secretary of State John Kerry visited Kazakhstan, Tajikistan, Uzbekistan, Kyrgyzstan and Turkmenistan. The US press noted that the main purpose of the Kerry trip was to strengthen relations with the five named states. Strengthening tool - economic partnership. However, Western analysts, representing the so-called alternative press, believe that Washington is developing a confrontation with Russia in the region. 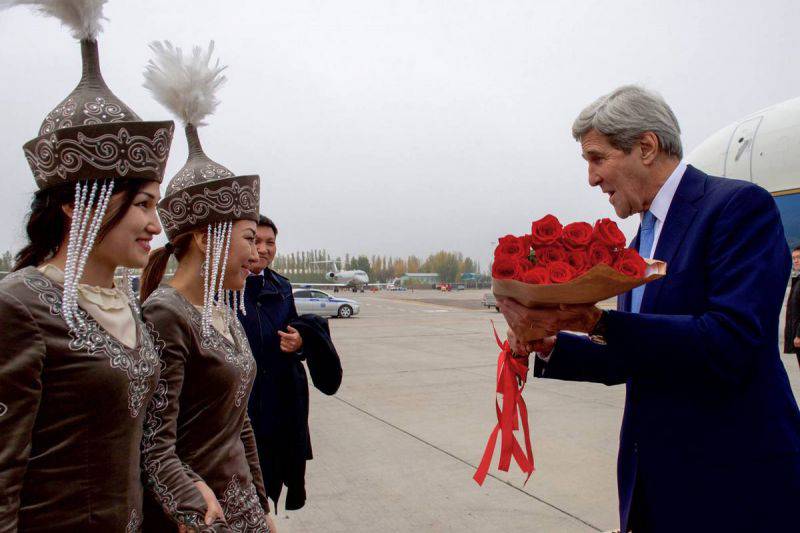 Recall, two weeks ago, the visit of John Kerry to Central Asia ended. The US Secretary of State visited five states: Kazakhstan, Tajikistan, Uzbekistan, Kyrgyzstan and Turkmenistan. This visit was literally historical. Coverage is impressive: five countries in a row. It was a frank demonstration of building up American influence in the region. And the demonstration was addressed, of course, to Moscow.

The American media wrote that the main purpose of the visit of D. Kerry was to strengthen relations with the states of Central Asia through economic partnership. As for Russia, our analysts reacted with disbelief to the reports of the American press. What is this "partnership"? Especially with Turkmenistan, where not only there is no democracy, but there is even a sample of its direct opposite! However, these analysts may look in the direction of Saudi Arabia or Qatar, where from time to time heads of pederasts are cut off and where there is also no (and is not planned) democracy. With these monarchies, the United States quite successfully cooperate, and even the petrodollar came up together.

One of the strongest states in the region, Kazakhstan (a member of the EAEU, the SCO and the CSTO), welcomed the overseas envoy. “Recently, in New York, I met with US President Barack Obama, we discussed issues of bilateral cooperation. From the first days of independence of our republic, which will be 24 in December, we cooperate with your country, and the Kazakh people are grateful for the continued support of our sovereignty and economic development. Today in our country operates about 500 companies with the participation of US capital. We aim to continue this work ", - quotes Tengrinews.kz words of Nursultan Nazarbayev, spoken to John Kerry.

Kazakhstan is one example. The biggest. Of course, with the rest of the countries the United States will carry out “bilateral cooperation”.

Portal analysts South Front believe that the recent visit by US Secretary of State John Kerry to the countries of Central Asia demonstrates the importance of the states of the region for Washington, including in the context of negative trends in US foreign policy in Afghanistan, where the local government, seated in the chair by White House experts, is weakening, and the Taliban And its allies are strengthening.

Kerry and the foreign ministers of Kazakhstan, Kyrgyzstan, Turkmenistan, Tajikistan and Uzbekistan at a meeting in Samarkand openly discussed areas of cooperation that affect a variety of areas: economics, water security, education.

American analysts believe that this list of areas rather formal. This is only a cover, and in fact there was a discussion of “additional issues” in “individual countries”. It is easy to predict, the authors of the article write that the purpose of Kerry’s visit and of American politics in general is issues related to Afghanistan and Russia.

Afghanistan and the activities of the "IG".

Borders between Central Asian states and Afghanistan draw the attention of politicians due to the increased activity of militants of all grades and calibers. Here and the Taliban, who tried to seize the city of Kunduz, and the "IG", whose formations begin to densely concentrate there. Militants "IG" generally consider this area a springboard for further expansion into Central Asia.

The threat is growing in the south. Previously, the number of militants "IG" has grown on the borders of Tajikistan and Turkmenistan.

Along with this, analysts note “serious internal problems” of Central Asian countries.

All this greatly worries not only the states of Central Asia themselves, but also the leadership of those countries that have influence in the region: first of all, they are Russia, the USA and China (the latter is conducting economic expansion here).

As for Russia, at the recent CSTO Collective Security Summit, she announced plans to create a joint security initiative at the borders. The initiative was invited to participate in several states of Central Asia. As American analysts write, additional Russian and Kazakhstani armed forces have already been deployed in the region within the framework of the Collective Security Treaty Organization (since June 2015). They cooperate with Chinese intelligence specialists.

The overall structure of the deployed armed forces in Tajikistan includes border guard units (troops of Russia, Kazakhstan, Tajikistan, as well as Russian and Kazakhstan military advisers) and separate military units from Russia, Kazakhstan and Belarus (the latter’s contribution is small) deployed in 201 th Russian military base, in the vicinity of Dushanbe, Kulyab and Kurgan-Tyube. In addition, there are units of the CSTO and the regional anti-terrorist structure (RATS) of the Shanghai Cooperation Organization, which includes Russian, Kazakh and Chinese intelligence forces.

However, not all countries support the efforts of the CSTO. Turkmenistan and Uzbekistan, for example, are discussing their own joint operations to strengthen and protect borders. These countries have previously preferred to “avoid close cooperation with the CSTO,” analysts remind.

According to experts, the reason for this attitude to the CSTO is the ambitions of the leaders of states. Currently, Ashgabat and Tashkent are trying to establish bilateral security partnerships.

Of course, the United States drew attention to this.

Washington, like Moscow, is concerned about the growth of aggression in Afghanistan, and at the same time is interested in strengthening security cooperation with Central Asian states in order to challenge Moscow as the dominant power that ensures military security in the region.

According to analysts, the motives of Washington in Central Asia are clear. However, the devil is in the details: the details of how the United States intends to "strengthen cooperation" in the field of security in the region are hidden in a "fog".

Nevertheless, experts believe that it is possible to assume something.

Turkmenistan could provide the United States with the permanent right to use the Mary-2 base (located close to the border of Turkmenistan with Afghanistan).

Another possible plan is US support for the Uzbek-Turkmen joint border security initiative.

Another “theme” could be an increase in the US presence in Tajikistan. Tajikistan is considered one of Russia's closest allies in Central Asia, and therefore Washington would like to increase its influence here.

Of course, so far none of these forms of cooperation has been fully confirmed. Nevertheless, analysts believe, the Kremlin can draw attention to these "attempts". “Separation of efforts” will create holes in Russia's regional security system. The recent Afghan events have clearly shown that US military efforts are unlikely to strengthen regional security. As a matter of fact, the American forces are simply not enough for this.

Experts believe that only the combined forces of Russia and Kazakhstan will be able to withstand the “IG” threat “quickly and effectively”. The military of Tajikistan and Kyrgyzstan do not have the appropriate military equipment; the armed forces of these countries are not able to act effectively. Well, while Uzbekistan and Turkmenistan, as already noted above, are trying to avoid participation in joint CSTO events.

Analysts, however, argue that, in general, Russia, China, Kazakhstan and other Central Asian countries assess the existing threats correctly.

Nevertheless, the unstable situation on the borders of the countries of Central Asia and Afghanistan leads to the fact that the confrontation between the United States and Russia is unfolding “throughout the former Soviet periphery”.

With this you will not argue, add on my own. Otherwise, it would not be a cold war, but a hot friendship of nations. So in Syria, too, there are two coalitions against the “IG”: one with the Russians, and the second you know with whom.

Observed and commented on Oleg Chuvakin
- especially for topwar.ru
Ctrl Enter
Noticed oshЫbku Highlight text and press. Ctrl + Enter
We are
Is the goal of the USA “controlled chaos” in Central Asia?Results of the week. "Either true or all is well"
Military Reviewin Yandex News
Military Reviewin Google News
26 comments
Information
Dear reader, to leave comments on the publication, you must to register.