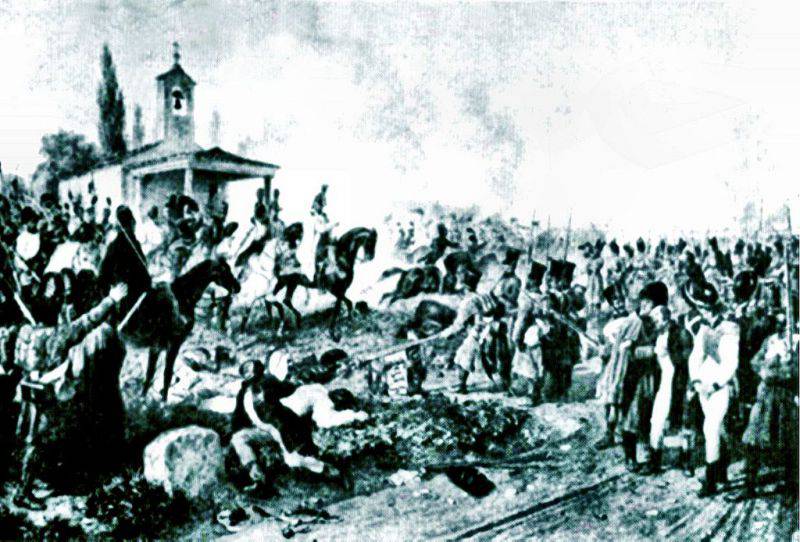 The Vienna court planned to conduct an offensive war in Italy. Initially, the Austrians were going to take the fortresses of Mantua and Peschiero, and then through Switzerland go to France. The troops were led by the hero of the Austrian Empire, army favorite Archduke Charles. Karl Ludwig Johann was one of the most talented Austrian generals. Karl began his military career during the revolutionary wars in 1792. In 1796, he successfully acted against the French on the Rhine. In the 1799 war of the year, Karl commanded the Austrian army, concentrated on the banks of the Lech river and again forced the French to withdraw beyond the Rhine. However, due to the mistakes of the Austrian Gofkrygsrat (court military council), he was unable to continue the offensive. The dissatisfaction of Karl-Ludwig-Johann was so strong that the commander left the post of commander and left for the city of Prague. In the 1800 year, after the defeats inflicted on the Austrians under Marengo and Hohenlinden, Karl again agreed to take command of the army, ordered the retreat of the troops and concluded a truce with the French, which served as the basis for the Luneville world.

From 1800 to 1809, he was Governor General of Bohemia. Simultaneously, Karl was appointed president of the Gofkrygsrat and field marshal. He began to reform the Austrian army. In 1801, the Ministry of War was established, which dealt with the finances and supply of the army. In 1802-1804, the city of Karl conducted a series of military reforms: light infantry battalions were disbanded and transformed into a Tyrolean chasseur regiment; formed 3 Lancers Regiment; reorganized artillery, introduced a linear and backup system; sappers and miners received separate hulls; The general headquarters was divided into the 3 department: the Adjutant service with the headquarters of the quartermaster general for training new officers, the Topographical department and the Military archive. As a result, the first series of reforms took place in Austria to the new war with France, which significantly strengthened the army. However, it was still far from complete success (the second stage of the reforms was held in 1806-1809).

The army of Karl consisted of 80 thousand soldiers and in September 1805, when the army of the Mac was marching towards Ulm, was stationed in the region of Verona, on the left bank of the Adige river, then the border of Austria with the Italian kingdom. By the end of October 1805, the number of armies planned to increase to 100 thousand people. Separate 10-th. Hiller's corps was located in the Triento area (Trento), guarding the communication with Tyrol.

The French army in Italy was commanded by Andre Massena, with a total of about 56 thousand bangs. Massena was instructed to act on defense, while the outcome of the war on the Danube is being decided and 17-thousand will do. Corps Saint-Cyr from Naples. Massena had a huge combat experience, starting service as a private in 1775. After serving 14 years, he retired with the rank of ensign - in the highest rank, which could not get a nobleman. After the revolution, re-entered the French army. He quickly became one of the best French commanders. When founding the First Empire, he was promoted to marshal. The French called him "Favorite Victory." 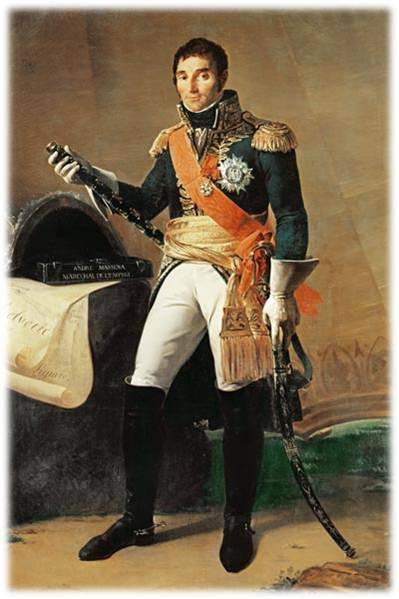 During the first operations, the plans of the Austrian high command changed. When in Vienna they learned about the alliance of France with Bavaria and about the movement of the French army from Boulogne to central Germany, Archduke Charles was instructed to send 20-thousand to Ulm. case. However, the commander of the Danube army Poppy, confident in his abilities and awaiting the arrival of Kutuzov’s army, considered this reinforcement to be excessive and ordered the troops, directed by the Archduke Karl to Ulm, to turn back. As a result, these troops could not assist Mac in the Ulm operation and did not have time for Karl during his fight with the French, spending time in useless marches. In addition, the commander in Tyrol, Archduke John, summoned half of the detachment standing at Trient.

Thus, Karl lost 20-thousand. corps sent to the Danube, and half of the squad of Hiller. The Austrian army in Italy lost numerical superiority and became almost equivalent to the French forces. The Austrian commander was forced to abandon the offensive and think about defense, especially since the corps of Saint-Cyr was in a hurry to get to Massena.

As a result, both sides at the beginning of the war were inactive, awaiting the arrival of reinforcements and news from the main theater. After Massena 16 of October received the news of the defeat of the Austrians near Ulm, the strategic initiative passed into the hands of the French army. The French went on the offensive. In turn, the Austrian archduke, having received news of Mac's surrender, realizing that apparently he would soon have to retreat from Italy, concentrated his troops on a strong position under Caldiero (Kaldiero). Dejected by the catastrophe of the Danube army, the Archduke Charles decided to preserve the honor of the Austrian army and give the French a battle, while at the same time ensuring the withdrawal of the Italian army to Austria. Therefore, the Austrians did not evade battle. 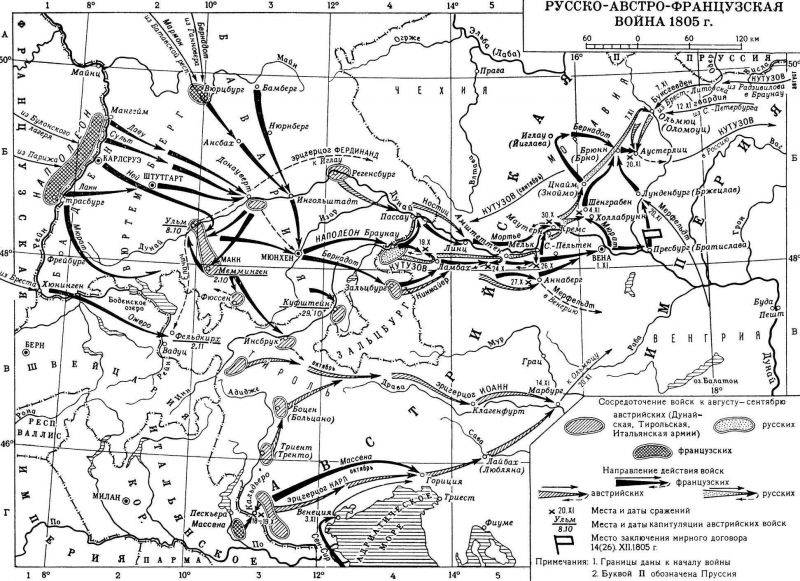 On the last day of the battle, the Austrian commander received instructions from Vienna to leave a strong garrison in Venice and to make a force march to join up with Kutuzov. On the night of 20 on October 21, the Austrians began to retreat. The French moved for the Austrians. The French in this battle lost about 3,7 thousand dead wounded and captured. The losses of the Austrian army - 2,7 thousand. Killed and wounded, 6,5 thousand. Captives.

Karl sent the 18 battalions to reinforce the Venice garrison and reached Palma Nova. Receiving news of the retreat of Kutuzov’s army along the way and seeing the impossibility of connecting with the Russians through Tarvis and Villach, the Archduke Charles left Palma-Nova on October 30 (November November) and moved to Goritsa and Laibach. November 11 Austrians arrived at Laybach.

During their retreat, the Austrians spread rumors that they are waiting for the arrival of the Russian army in Dalmatia and are going to unite with the allies. Believing in these rumors, and also awaiting the landing of the Russians and English in Naples, Massena stopped the pursuit of the Austrian army and stopped on the banks of the Isonzo river, sending forward horse trips. The Corps of Saint-Cyr was instructed to besiege Venice.

Freed from the French, the Archduke Charles moved to Marburg where he planned to join the forces of the Archduke John of Tyrol, and then planned to go in the direction of Vienna.

The Archduke John retreated from Tirol with serious losses. 30-thousand The Austrian army was divided into several units. A detachment of the dead Danube army under the leadership of Jelačić was at Feldkirch; Prince Rogan at Fussen; Saint-Julien y Charnitz; Tyrolean militia in Kufstein; Archduke John himself with a reserve in Innsbruck. John's army was connected to the army of Charles by Hiller’s corps stationed in Trient and Bozen.

Napoleon, having dealt with the army of Mac at Ulm, in order to secure his right wing, moved Ney's corps from Ulm to Tyrol, the Derua Bavarian division from Salzburg and Ogerot's corps from the west, from Feldkirch. With her quick onslaught, despite the impregnability of Scharnitz, October 24 took it and moved to Innsbruck. The Archduke retreated to a position in Brenner. Having received the order of the High Command to leave Tyrol and rush along with Carl to save Austria, he began to retreat. The detachments of Jelačić and Rogan were ordered to retreat through Bozen. However, the troops of Augeros bypassed Yelačić’s detachment and forced him to capitulate without a fight. The detachment of Prince Rogan bypassed Ney's troops, preventing him from connecting with the main forces. Then Rogan went mountain paths to Italy, hoping to make his way into Venice with the rear of Massena’s army. But the troops of Saint-Cyr, having received news of the approach of the Austrians, intercepted Rogan's detachment and scattered him. The Tyrolean militia stationed in Koufstein also failed. The Austrians were surrounded by the Bavarian division of Deruya. The Austrians surrendered.

Thus, three Austrian detachments from the Tyrolean army of Archduke John were cut off and captured. Austrian troops in the Italian and Tyrolean sectors were defeated and quickly retreated to Austria. 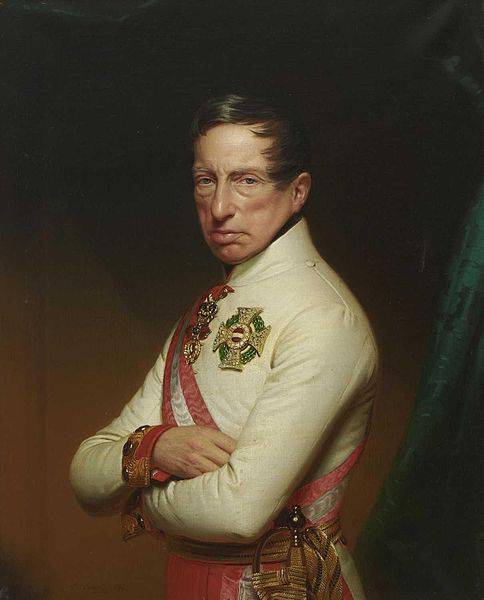 Author:
Alexander Samsonov
Articles from this series:
War of the Third Coalition

England vs Russia. Drawing into war with france
England vs Russia. Getting involved in a war with France. Part of 2
"I won the battle with some marches." How Napoleon defeated the III anti-French coalition
The catastrophe of the Austrian army near Ulm
How England became the "mistress of the seas"
Trafalgar defeat
Ulm-Olmutsky march maneuver Kutuzov
"Kremskoy massacre"
How the "squad of heroes" of Bagration saved the Russian army