November 17 2015
105
October 23 launched the so-called public discussion of the initiative of the Ministry of Economic Development of the Russian Federation concerning the abolition of the status of closed administrative-territorial entities (CATF) for six cities and towns of the Russian Federation. We are talking about the proposal of the Ministry of Economic Development to liquidate the status of the closed regional closed-trade centers for such settlements as Seversk (Tomsk region), Zarechny (Penza region), Novouralsk (Sverdlovsk region), Zelenogorsk (Krasnoyarsk region), Star (Perm region) and Lokomotivny (Chelyabinsk region).

Zelenogorsk forms an urban district with a population of over 63 thousand people. One of the city-forming enterprises is “Production Association“ Electrochemical Plant ”- an enterprise of the nuclear industry of the Russian Federation.

Seversk - the largest closed city in Russia. The population is about 108 thousand people. The town-forming enterprise, JSC Siberian Chemical Combine, is an enterprise of the atomic industry of the Russian Federation with a staff of about 5 thousand people. 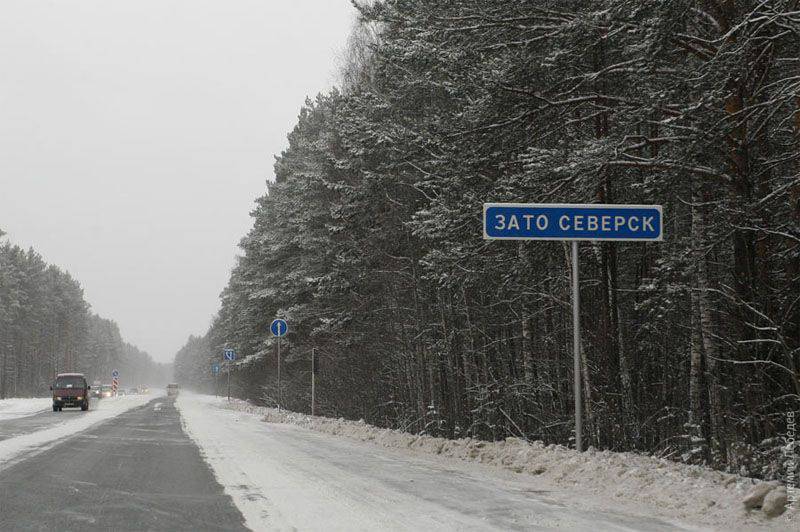 Zarechny - a city with a population of about 64 thousand inhabitants. One of the largest enterprises in the city is the Rosatom object of the Federal State Unitary Enterprise Federal Scientific-Practical Training Center “PO“ Start ”. M. V. Protsenko.

Novouralsk - The administrative center of the city district of the same name with a population of about 82,5 thousand inhabitants. The city-forming enterprise is JSC UEKhK (Ural Electrochemical Plant) with more than 2,5 employees thousand people. The enterprise is an integral part of the TVEL company of the Rosatom State Corporation. The operating profit of the enterprise is estimated at 20 billion rubles.

Star (urban-type settlement, the former name ZATO - Perm-76). The population exceeds 9 thousand people. At the beginning of the 60-x in Perm-76 was created 52-I missile Tarnopol-Berlin missile division. In 2002, the division was disbanded, and in its place it was decided to create an 1328 base for storing and reloading elements of the BZHRK. In 2007, the 1328-I base was disbanded. More than 90% of land in the town of Star is owned by the Ministry of Defense. Now the main defense department is discussing the possibility of returning to the variant of active exploitation of combat railroad missile systems.

Locomotive (urban-type settlement, the former name ZATO - Sunny). The number of inhabitants is about 8,5 thousand people. Locomotive is the location of the 59 th (Kartalinsk) missile division until its disbandment in the 2005 year. The largest land area in Lokomotivny is the property of the Ministry of Defense of the Russian Federation.

At this page The website of the Ministry of Economic Development can be thoroughly acquainted with the projects of Ms. Marchenko and Mr. Ulyukayev, under which, interestingly, the name of the President of the Russian Federation Vladimir Putin is typed. To search for documents in the query string, just enter the phrase "closed administrative-territorial units". Even more interesting is that the project, as it were, was on “public discussion” for two weeks, and the president’s name at that time already appeared in it than in the Ministry of Economic Development seemed to hint that, in principle, the question of depriving ZATO status of six localities, most of which are of strategic importance for the country's defense and energy security, the ministry has already decided ...

From the explanatory note to one of the projects (the text is given in its entirety, since, as they say, there are many ... very many interesting things):

‎
In accordance with the instructions of the Government of the Russian Federation
from 15 August 2015 g. № DM-ПХNUMX-13 and from 5591 August 19 g. № ДК-П2015-16
In order to optimize budget expenditures and the number of closed administrative-territorial formations (CATF), the Ministry of Economic Development of Russia was tasked to work out the proposal of the Ministry of Finance to abolish the Star Territory of the Perm Territory and Closed Region of the Chelyabinsk Region.

As part of the execution of the 1 clause, instructions of the Government of the Russian Federation dated 21 of August 2015, No. DK-П16-5741, the Ministry of Defense of Russia, the Ministry of Industry and Trade of Russia, Roskosmos and the State Atomic Energy Corporation ROSATOM reported that there were no proposals to abolish (transform) Closed Joint-Stock Company due to the absence (termination of ) located in them organizations and (or) objects for which in order to ensure the defense of the country and the security of the state, a special regime of safe operation and protection of state secrets is established.

At the same time, in accordance with the information provided by the Ministry of Finance of Russia, as a result of the Ministry of Regional Development of Russia carried out an analysis of actual (planned for 2012-2012) works (services) carried out by the Ministry of Finance of Russia in order to ensure the state and security of the state in the territories subordinated to CATF execution of the order of the Government of the Russian Federation of 2017 on April 25, No. DK-ПХNUMX-2012пр) it was concluded that the following may be abolished:
- Star Perm region and Lokomotivny Chelyabinsk region, subordinate to the Ministry of Defense of Russia,
- Novouralsk of the Sverdlovsk Region, Zelenogorsk of the Krasnoyarsk Territory, Seversk of the Tomsk Region and Zarechny of the Penza Region, subordinate to the State Corporation Rosatom.

So, from the explanatory note, it becomes clear that the instigator of the “draft presidential decree” is Mr. Siluanov and the department under his control - the Ministry of Finance. Mr. Siluanov, in his turn, attended to the issues of optimizing budget expenditures and the all-time need to deprive six (for the time being) localities of ZATO status at the request of other helmsmen of the government. From the same note, we can conclude that if the Ministry of Defense and Rosatom on Star and Lokomotiv village did not come up with proposals (as if in departments with “optimization” they agreed), then according to Zarechny, Seversk and other ZATO questions and proposals, judging by , there were, but who paid attention to them ... They decided to deprive ZATO status from just one shop like those settlements where secret objects managed, forgive my God, earlier “optimize”, and settlements where regime objects not just continue to work, but also bring substantial amounts We are in the budget, as well as in the chain of strategic enterprises.

Oh, by the way ... And here link on one of those documents of the Ministry of Economic Development and the Ministry of Finance, which, as it were, unobtrusively suggests the President of the Russian Federation to put his signature under it.

(...) decree:
1. To abolish from 1 in January of 2016, a closed administrative territorial entity is the city of Zarechny, Penza Region.
2. Government of the Russian Federation jointly
With the Government of the Penza Region, in the 9 month period, carry out the necessary organizational measures related to the abolition of the closed administrative-territorial unit - the city of Zarechny, the Penza Region. (...)
President of the Russian Federation V.Putin

That is, the project began to be “discussed” at the end of October, the “public discussion” of 6 was completed in November, and with 1 in January of 2016, the document should already come into force. This is the pace! With such a pace, our gallant doctors of economics, laureates of various prizes and state award holders settled in the government resolved questions about the economy going into steady growth without cuts, layoffs, optimizations, proposals for raising the retirement age. But, apparently, the optimization virus in the organisms of our current government officials managed to develop to such a level that the proposals become, excuse me, more and more unlimited.

What is the adequacy of the proposal to deprive cities with large enterprises in the nuclear industry sphere of a closed status (by the way, the majority of residents of these cities, to put it mildly, are perplexed about the government initiative)? In that, with the protection of cities in which the nuclear shield of the state is being forged, it is necessary to do away against the background of increasing terrorist threat throughout the world? The fact that without creating a full-fledged program of economic development of these cities is proposed to deprive them of state protection and support?

If the government does not notice the whole threat of its project, then the question arises to the level of professional training of people who, as they say, are at the helm. If they notice, and therefore such projects are being introduced, then this is already a special conversation, and special organs should conduct it ... And special organs clearly may have questions to the authors of the “terrific” idea of ​​depriving cities with large strategic sites of ZATO status with all the consequences for the country's state security implications.

Information for thought:
The Russian government is going to save on the deprivation of 6 settlements of the status of the closed city of about 2,5 billion rubles at the initial stage. And, for example, an estimate of the level of damage from a terrorist act in Paris, according to preliminary estimates, amounted to more than 200 million euros (translated into rubles - about 14 billion) ...

The damage from the Chernobyl accident (the Chernobyl nuclear power plant) in 1986 amounted to an enormous amount of 18 billion dollars (this figure was called M. Gorbachev in an interview with Western media). And who - Ulyukaev or Siluanov - today are able to guarantee that after depriving ZATO of the same Seversk or Zarechny with simultaneous access to the cities of "tourists" and "investors" the 1986 tragedy will not be very strange along the whole chain of preceding factors? Or is the possibility of saving 2,5 billion rubles for adherents of ultraliberal (and no less radical) approaches to solving economic problems more important than the state security system? A lot of questions ... A lot ...

PS All the projects of the Ministry of Economic Development, which were discussed in the material, became the owners of a negative rating on the department's website. But will this prevent the pushing of a frankly dubious idea ...

In addition to the material, the plot of Konstantin Semin is proposed in the program "Agitprop" (VGTRK). On the subject of the article - a video from 7: 35:

Ctrl Enter
Noticed oshЫbku Highlight text and press. Ctrl + Enter
We are
Results of the week. “Mom, mom, what will I do? Koo! "Is there a solution to the problem of patriotic education of young people? Private initiatives
Military Reviewin Yandex News
Military Reviewin Google News
105 comments
Information
Dear reader, to leave comments on the publication, you must sign in.