German schism: all against Angels

November 17 2015
52
The current alarming situation in the European Union, caused by the influx of migrants, Angela Merkel is too tough. Where to her! She has no answer to the challenges. Experts believe that the German Chancellor is not able to cope even with their own government. Those whom she had previously considered as “friends” naively, now dig three shovels in her pit. 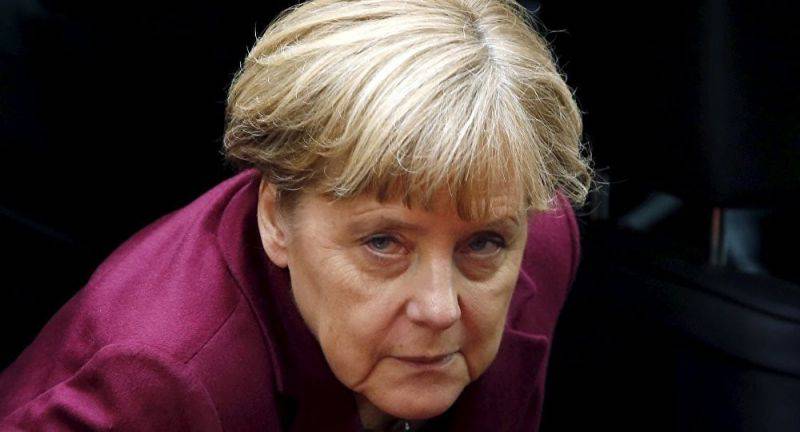 Germany is overwhelmed by the refugee crisis. Angela Merkel is accused of being unable to control the situation. “And that's right,” writes in Spiegele journalist Jacob Augstein (Jakob Augstein).

Of course, no one should expect from Frau Merkel that she will personally control the entire flow of refugees. However, the Germans have the right to expect that Frau Chancellor will manage to control the process of control.

But she failed. Control over the influx of refugees is now an illusion, says columnist edition. Moreover, Angela Merkel would need to control and ministers. This is a real need. But here she blundered.

What does Frau Chancellor do for all? Maybe it's too late to count on her? If she can't even control the government, what can we say about the refugee crisis?

Actually, the journalist considers the refugee crisis a cause of the “governmental crisis”. "Chaos" calls Augstein what is happening around the Chancellor.

Judge for yourself: a barely coalition government agreed on a new policy regarding the granting of political asylum to migrants, when Minister of the Interior Thomas de Maiziere suddenly appeared and said that the previously agreed programs had been significantly toughened. And then the spoken words are taken back: the special representative of the Chancellor announces that everything remains in its place. Is this not a mess? And that's not all: under the curtain, Wolfgang Schäuble (Minister of Finance of the Federal Republic of Germany) arrives and declares that de Mezieres made the “necessary” decision to limit the number of migrants.

Last week they started talking about a “compromise” solution. Its essence is that refugees will be able to stay in Germany for a period of up to three years. However, there is no order here: it turned out that the Minister of the Interior "plays with marked cards". There is an order of so-called additional protection: the right to a year of residence, excluding family reunification. And de Maiziere states that the Syrians should fall under this rule. The columnist considers De Maisiere to be a "deceiver." This is “a dirty game of the authorities at the expense of tens of thousands of women and children,” he believes. After all, their husbands and fathers are now in Germany. But Schaeuble and de Maiziere will not allow them to bring their families here. “Such a policy has no heart, no mind,” writes Augstein.

However, Schaeuble and de Maiziere are guided by other criteria. In their opinion, the number of foreigners in Germany can no longer grow. The wave of hatred towards “foreigners” in Germany has already risen to dangerous limits. The Republic is changing before our eyes. The columnist considers the behavior of Thomas de Mezieres and Wolfgang Schauble a “coup”.

Apparently, let us add, Angela Merkel lost control of the situation so much that the initiative passed to her political opponents.

Analysts from the United States also predict the decline of Frau Chancellor.

In a reputable magazine "Foreign Policy" It is noted that during the five-year debt crisis, Berlin played the role of the “economic engine of Europe”. But now, after the Frau Chancellor "did not pass the test" of the refugee crisis, there was a concern: Berlin, this "rock of Europe", "began to crack." Writes about this journalist David Francis (David Francis).

Hundreds of thousands of people, many of them Syrians, are seeking refuge in Germany. The ruling conservative coalition led by Angela Merkel cannot solve this problem, cannot even find a common language with each other. Not only the coalition is cracking at the seams: Germany is tormented by a scandal with atmospheric "emissions" of Volkswagen cars, and German football officials are under investigation for taking bribes (cases related to the 2006 World Cup). Finally, the press is musolite news about spying on German foreign intelligence for the Allies. And it turned out that the level of espionage was much higher than previously assumed. Germany spied on EU member states, including Poland, Austria, Denmark, and Croatia.

Jörg Wolff, editor-in-chief of the Berlin online think tank Atlantic-community.org, told Foreign Policy that the German economy, regulators and the judicial system will have to work hard to reduce the losses that Germany is waiting for in the long run, as well in order to launder the messed up international reputation of Germany.

But the main thing is the refugee crisis. It was he who “made Merkel vulnerable.” The ruling coalition began to fall apart precisely because of this crisis.

Even last month, Angela Merkel was considered a candidate for the Nobel Peace Prize. It did not work ... And now her critics are challenging her authority, attacking the attempts of the Chancellor to solve the problem with migrants. The social democrats, Merkel’s junior partners in the government, are now seeking to prove that she (Merkel) was not at all ready to receive refugees who were rushing through the “open doors of Germany”.

For example, the Social Democrat and Vice Chancellor Sigmar Gabriel rejects Merkel’s plans to create so-called “transit zones.” Moreover, Herr Gabriel challenges Merkel: he will run for the next federal election in 2017. “Every time we reach an agreement, a new proposal immediately appears that was not on the table before,” said Gabriel on TV. As a result, he believes, the Germans began to think that the left hand of the government does not know what the right one is doing.

Last Friday, Minister of the Interior Thomas de Mezieres said that only limited asylum (for one year) would be granted to refugees. And they will not be allowed to bring relatives into Germany for two years. It became clear to everyone that they did not even report on this plan to the chancellor. De Maiziere announced it, and the matter with the end.

Markus Knauf, a spokesman for the German embassy in Washington, told FP that the FRG government "is very difficult to work on the goals that Chancellor Merkel publicly voiced." He meant assistance to refugees, ensuring order of migration and so on.

Wolf, the editor of the Brain Trust, mentioned above, notes that for many years the White House overestimated the ability of the German government to solve problems relating both to Germany itself and to the whole of Europe. “You can’t count too much on Berlin,” Herr Wolf says with irony.

One gets the impression that Washington has thrown a million pages of compromising information on Angela Merkel, and her political rivals in Germany have not lost their chance. Apparently, the time has come to retire the old woman, and the idea of ​​"united Europe" - in history.

Observed and commented on Oleg Chuvakin
- especially for topwar.ru
Ctrl Enter
Noticed oshЫbku Highlight text and press. Ctrl + Enter
We are
Raped Europe. What awaits Germany and other countries after the "fun night in Cologne"Results of the week. “Mom, mom, what will I do? Koo! "
52 comments
Information
Dear reader, to leave comments on the publication, you must to register.