November 17 2015
43
Hundreds of Muhammad who call themselves (probably out of patriotism) Jones are returning to the UK from Syria. It is not a secret for anyone, including Scotland Yard, what these bearded “Englishmen” will do in London. Objective analysts urge the West to take an example from Russia: after all, it has considerable experience in the fight against terrorism. The issue of confronting mass terrorism was particularly acute in connection with the bloody terrorist attacks in Paris. 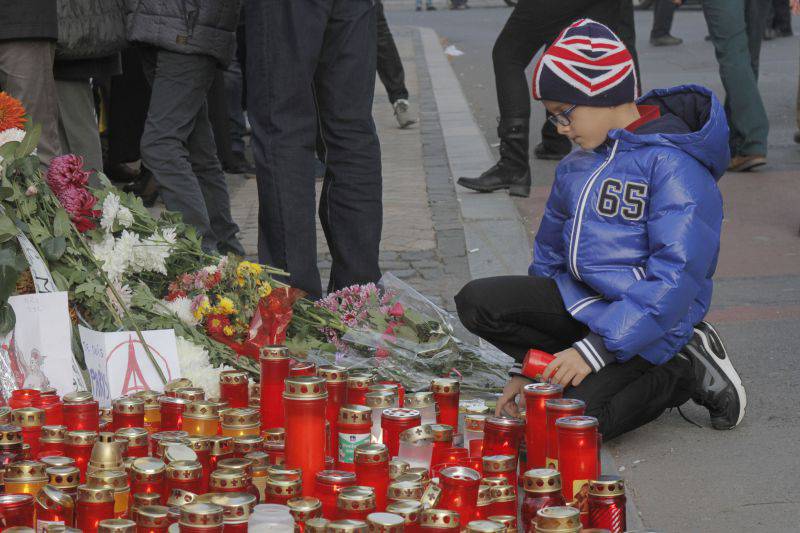 Leonid Bershidsky (Leonid Bershidsky) in Bloomberg View He expressed this opinion: the war in Syria is dangerous for the whole world. Therefore, France and other states should take into account the experience of Russia acquired by it in the fight against terrorism.

Bearing in mind the terrorist attacks in Paris that took more than 120 lives, France and the rest of the countries involved in the Syrian conflict should bear in mind the experience of Russia’s struggle “against this kind of terrorism,” the journalist said. Terrorism will not stop until its “epicenter” is destroyed.

French President Francois Hollande said that the attacks in Paris were an "act of war" waged by the "army" of jihadists. This may be true even if it turns out that some of the jihadists were not prepared as extremists or were French citizens in general (some eyewitnesses claimed that the terrorists spoke French without a foreign accent).

The “pattern” by which suicide bombers act is “too good” familiar to Russians, a columnist reminds. In 2004, Russia was shocked by a series of attacks. The second Chechen war between Russian security forces and separatist militants in the Caucasus lasted for five years, when a suicide bomber blew up a train in the Moscow metro (February 2004 of the year, a 42 man died). In June of the same year, 10 people were killed in a bomb blast at a market in Samara. Then they were attacked by the police station in Ingushetia (hundreds of victims). In August, suicide bombers blew up two passenger airliners (90 dead). Another terrorist exploded herself near a metro station, killing an 10 man. Finally, in early September, a group of Chechens seized 1128 hostages in the Beslan school (North Ossetia). 334 civilians, including 186 children, died during a three-day siege. The building was stormed by special forces; 31 terrorist was destroyed.

And what Putin has done, the observer notes: in 2005, the President of the Russian Federation proposed the son of the former Muslim cleric of Chechnya, Ahmad Kadyrov, who died in 2004 as a result of another terrorist attack, to control Chechnya. Ramzan Kadyrov at that time was 29 years old. He was ready to avenge the death of his father. Previously, Kadyrovs were separatists, and therefore Ramzan had an “excellent intelligence network in the war-torn region.” Kadyrov received from Putin "generous funding, and at the same time permission to ignore federal laws." Kadyrov could "not regret anyone whom he considered an enemy." It took him a little more than three years to end the war.

In 2004, the main war was fought in the mountains of Chechnya; attacks on Moscow and other cities were aimed at instilling fear to ordinary citizens. Paris terrorists may have the same motivation, Bershidsky said. The main war is fought in Syria.

The measures that France is taking today will not prevent possible further attacks. Likewise, Putin’s powerful law enforcement agencies could not stop 2004’s horror of the year. Yes, in Russia, as in France, the police had lists of suspects and almost unlimited powers of wiretapping and surveillance. Islamist groups deftly know how to recruit new people. The organization of the same terrorist attack does not take them much time.

Putin intervened in the Syrian situation, partly because the columnist believes that he "remembers Chechnya." And also because thousands of separatists who once fought in Chechnya joined the ranks of the militants of the IG and the Syrian version of Al-Qaida, the Al-Nusra Front. Putin puts exactly the same thing that he put in Chechnya: he helps the "ruthless local leader Bashar al-Assad" waging war with everyone who takes on weaponwhether Islamist, terrorist or separatist.

According to the journalist, France and other states that are members of a coalition led by the United States must now realize that they are all "potential targets for attacks like the attacks in Paris." Therefore, they will have to decide whether they will "subscribe to the Putin methodology." The Russian president’s method has proven effective in Chechnya, but it’s not certain if it will work in Syria. One thing is clear: the Syrian conflict will not be resolved until the “Islamic State” is destroyed in its very “epicenter”. And until then, "no country is immune" from militant attacks.

What Bershidsky writes about is coming true today.

British newspaper "The Telegraph" spoke about the "special forces on the streets of the UK." It turns out that London is afraid to be "the next target of" IG ".

Journalists Tom Whitehead, Andrew Gilligan and Ben Farmer report that the UK has tightened security measures. The reason for the strong concerns was the information of the special services about 450 "radical British, who returned to the UK from Syria."

Special forces patrol the streets of cities in areas of stations, shopping centers and public places. Britain no longer conceals the fear of becoming the “next target” for a terrorist attack by militants “IG”.

Fear is based on one more fact: it is now disclosed that Scotland Yard is investigating 600 cases involving the activities of militants from Syria and Iraq.

Charles Farr, director of security and anti-terrorism, said that the “IS” “inspires” people in the UK who are preparing to “take the attack” here.

Around 750, British citizens who fought in Syria, he said, "are of interest to security and intelligence services." Of these, returned to Britain "about 60 percent." Farr noted that before the 70 the British died in Syria.

The new data shows a “sharp increase” compared to previous estimates (near the 350 militants).

Mr. Farr explained to the press that the ideologists of IG today are convincing potential terrorists to either go to Syria and join the ranks of the group, or stay in the UK and "take the attack" here.

Among those who fall under the influence of the Islamists, Farr singled out young people. Young people carry out "ideological care", plunging into "Islamist inspiration." Those who leave London today, leaving for Syria to fight on the side of "IG", are also much younger than before.

Cameron is also afraid of attacks in London: he states that "the United Kingdom faces the same threat" that Paris has already faced.

The secret forces of the special forces and the police are patrolling the London West End and social centers today. Also, close monitoring is carried out at the metro and railway stations. Metropolitan Police Commissioner Bernard Hogan Sir Howe speaks of a "serious cause for concern."

MI-5 and the police monitor the communications of the well-known IG fanatics, since they can avenge the death of the jihadist John in Rakka (his real name is Mohammed Emvazi, who previously lived in London).

The authorities urge citizens to be vigilant. At the same time, Theresa May, the Minister of the Interior, says that the British police and special services "work day and night for the safety of the population."

The violent and bloody terrorist attacks in Paris, staged by Islamist militants on Friday last week, forced journalists, analysts and the Western establishment to think about the effectiveness of Russian methods of combating terrorism. Probably Russia's successes in confronting IG and other terrorist groups in Syria, as well as the Chechen experience in opposing Islamists and separatists, could serve the West as an example of how to destroy militants, avoiding assessments of their political overtones, as they used to do in Washington and London dividing terrorists into “bad” and “good”.

Ctrl Enter
Noticed oshЫbku Highlight text and press. Ctrl + Enter
We are
Front lines in the Syrian conflict as contours of the future world orderBlack and white of modern patriotism. A word about the museum
Military Reviewin Yandex News
Military Reviewin Google News
43 comments
Information
Dear reader, to leave comments on the publication, you must to register.