November 16 2015
158
At the reception at the Turkish Prime Minister Ahmet Davutoglu, held at the G20 summit, one of the most popular figures was Vladimir Putin. Moreover, Barack Obama said about the “importance of military efforts” of Russia in Syria. This gave analysts a reason to talk about the fact that Moscow is no longer an “outcast” in world politics. On the contrary, Russia is becoming a major player in the international arena. 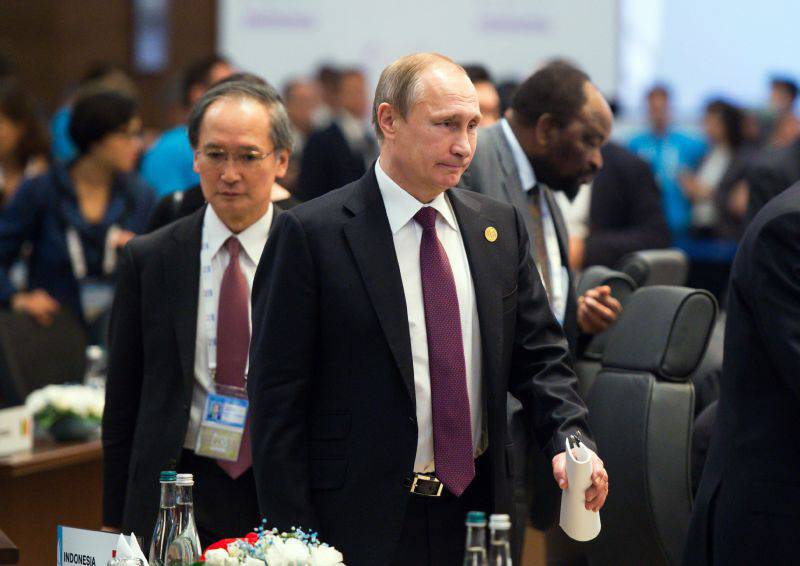 As part of the G20 summit, a meeting took place between the Russian president and the American president B.Kh. Obama. Vladimir Putin spoke about the risks in the global economy, including in the light of the terrorist attacks in Paris.

“President Putin speaks of risks for the growth prospects of the world economy, including in the light of the recent Parisian attacks,” on Twitter the official Russian representative of the head of state (sherpa) in the "Big Twenty" Svetlana Lukash.

As the Russian Sherpa stated, during the reception of the Turkish Prime Minister at the G20 summit, Vladimir Putin turned out to be one of the most popular figures. “All the leaders talked on a par with representatives of civil society and business and various other formats who met in the year of the Turkish presidency. President Putin was one of the most popular figures at this reception, everyone wanted to communicate with him, ”Svetlana Lukash quotes. "Lenta.ru".

According to Lukash, the meeting of the presidents of Russia and the United States was held in an “absolutely benevolent, absolutely constructive” manner.

During the conversation, Obama and Putin came to a single conclusion: in Syria, the transfer of power is necessary, and it will be carried out by the Syrians themselves. The process will be preceded by negotiations under the auspices of the UN. This American official told the Reuters reporter, notes RBC.

One of the most important topics of the summit was the problem of world terrorism, aggravated after the bloody terrorist attacks in Paris. At the current G20 summit is expected to adopt a statement on terrorism. States want to redouble their efforts to combat the financing of terrorism, establish border controls and improve flight safety. It is also expected that calls for better coordination and information sharing will be recorded on paper. The terrorists of IG must be cut off from financing, including oil trading on the black market. This was stated by interlocutors «Bloomberg».

And one more statement: on Sunday, at a meeting with President Francois Hollande, former French President Nicolas Sarkozy said: "There can be no two coalitions in Syria." Recall that at the end of October, Sarkozy visited Moscow.

Unlike last year’s summit in Australia, when Western leaders avoided Putin, the Russian president in Antalya, who actually led the fight against IG, was perhaps the most popular leader, writes Alexander Bratersky. Gazeta.ru. B. H. Obama at a meeting with Vladimir Putin noted the "importance of military efforts" of Russia in Syria.

These words, which positively characterize the actions of Moscow against the IG, run counter to the criticism of Russia adopted by the White House. Until recently, Washington insisted, a columnist reminds that a significant part of the Russian air strikes are inflicted not on the positions of the "IG", but on the "rebels". Accordingly, the White House considered Putin’s strategy “counterproductive.”

Experts - both Western and Russian - talked about changing the "tone" of Washington. The Wall Street Journal writes directly that the White House’s comments after the meeting of the two presidents at the G20 summit testify to the “change in tone” of the US administration regarding the actions of the Russian Federation in Syria.

The head of the Presidium of the Council on Foreign and Defense Policy Fyodor Lukyanov, whose opinion also leads Gazeta.ru, called the statement of the American President a “curious nuance” of the US policy regarding the Russian military operation in Syria. The expert noted that the focus of the West on the Syrian events "shifted." “The events that took place in France shift this focus even more - everyone understands the importance of delivering a military strike against the Islamists,” said F. Lukyanov.

The “curious nuance” is confirmed by the statement by US presidential adviser on security, Ben Rhodes. According to him, which leads InterfaxThe United States, together with France, is planning to intensify the air strikes at the position of "IG". And not only in Syria, but also in Iraq. According to Rhodes, airstrikes will be inflicted on the "pain points" of jihadists.

He also noted that IG has intentions to organize terrorist attacks against all members of the international coalition. At the same time, the United States does not have data on threats to their national security.

TASS handed over a statement from British Prime Minister David Cameron. He said that the positions of Russia and Great Britain regarding the need to defeat the "Islamic State" coincide.

And just became aware that David Cameron intends to discuss with the president of Russia at the G20 summit aviation safety issues.

Recall a few days ago стало известноthat in the framework of the new national security strategy London is preparing to recognize Russia as “a threat of a higher order”. The founding strategic document should be presented to 23 on November by the same Cameron. According to an unnamed source in the government, Russia was on the list of the main threats because of the policy towards Ukraine, the expansion of the military presence in Kaliningrad and operations in Syria.

As you can see, the position of Western leaders is changing before our eyes. It is unlikely, of course, that Russia is removed from the list of “threats”, but after the brutal Islamist terrorist attacks in Paris, a rapprochement between the West and Moscow became obvious even to the most ardent “anti-Soviet” supporters of the Cold War and the arms race. Obama, and especially Cameron, who, in essence, repeats Obama, is unlikely to continue to “stigmatize” Russia for its “counterproductive” strategy in Syria. On the contrary, the current G20 summit will begin counting the days to the strategic rapprochement of the Middle East coalition between Russia, Iran and Syria and a coalition led by the United States that has not yet given effective results in the fight against IG.

Sarkozy is right this time: "There can be no two coalitions in Syria."

There can not be two coalitions where the world has one enemy - terrorism. The West sees late, but better late than never.

Let's hope this insight becomes historical the outcome of the GXNUMX Summit.

Ctrl Enter
Noticed oshЫbku Highlight text and press. Ctrl + Enter
We are
Erdogan was left without a "brother"Results of the week. “Mom, mom, what will I do? Koo! "
158 comments
Information
Dear reader, to leave comments on the publication, you must to register.