The PTJ Anti-Terrorism Unit is an elite special armed unit of the Ministry of the Interior of the Republic of Serbia, primarily designed to combat terrorism, organized crime and other potential threats that could cause significant damage to the national interests of this Balkan country. 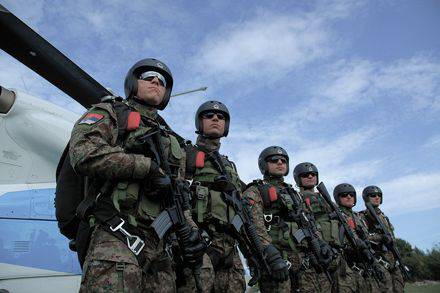 From the very beginning, the PTJ was not intended to carry out the tasks assigned to the gendarmerie, which was engaged in ensuring law and order, guarding state borders, etc. The new unit was immediately focused on solving much more narrow and complex tasks related to the elimination of terrorist groups, the release of hostages, the capture of dangerous armed criminals, etc. It was in this vein that the entire training of the group was built, training programs were developed and the group was supplied with special weapons and equipment by the

Two years later, in 2005, the PTJ group received a completely new commanding staff and began training new employees, whose main job is combating terrorism. The division was headed by Colonel Goran Dragovic. In 2006, some more structural changes took place, as a result of which, instead of eight platoons, four teams led by headquarters appeared in the group. A year later, 11 on April 2007, after a series of successful operations, the Serbian government decided to separate the PTJ group from the gendarmerie, making it an independent unit, the control of which was assigned directly to the head of the Serbian police.

The main tasks of the PTJ

The task of countering terrorism is set by the Commissioner of Police with the approval of the Minister of the Interior of the Republic of Serbia.

The anti-terrorism unit is charged with planning, organizing and executing the most difficult missions to curb acts of terrorism. The staff of the group conducts continuous monitoring and analysis of all events related to the manifestation of terrorism both within the country and in the international arena. Their immediate duties are to provide physical evidence and to arrest the perpetrators; prevention of terrorist activities; direct intervention to eliminate terrorist groups and violation of an organized terrorist network, freeing hostages in public places (airports, schools, ports, theaters, etc.) or by public transport (airplanes, trains, riverboats, buses), detention of highly dangerous armed criminals , representatives of organized criminal groups. In addition, the group is entrusted with the task of protecting VIPs and ensuring the security of important political and diplomatic institutions and facilities. 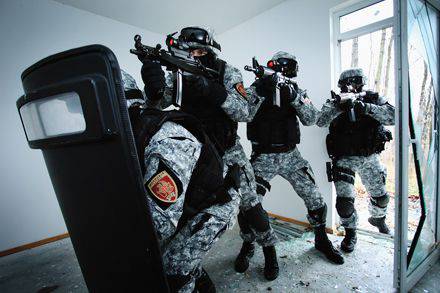 Currently, the group consists of 215 employees - and this number is close to the standard staffing levels of such units in the European Union.
The PTJ group consists of three main segments:
- command;
- logistic division;
- 4 operational commands.

The operational part of the group includes 147 officers, who are directly supervised by the deputy commander for special operations. Of the four teams, two are designed to carry out anti-terrorism actions in urban areas, one - in rural areas. The fourth team is responsible for fire support and security personnel and premises. Each of the first three teams consists of a 35 man, the fourth includes an 42 operative.
Each team has three battle groups of 9 specialists each. The first includes climbers, the second and third are divers and parachutists. In addition, each group includes four snipers, a dog handler with a service dog, an expert on explosives and a doctor.

The fourth team is a team for fire support, equipped with heavy weapons and special equipment. These are machine guns, grenade launchers, Hummer cars. The VIP security group is formed when necessary and includes specialists from all combat teams. There are specialists in the unit for conducting negotiations: these are psychologists and the most experienced operatives who are involved in the event of an operation to free the hostages.

The main goal of the PTJ personnel training system is to provide them with sustainable skills in all special areas necessary for the qualitative fulfillment of the assigned tasks of countering terrorism.

Training is divided into two main stages: basic and specialized. The group is usually selected for those who already serve in other units of the Serbian police, but the advantage is given to the gendarmerie or police intervention team.

In order to become a PTJ fighter, a candidate must meet the following basic requirements: be a citizen of the Republic of Serbia, serve in the Ministry of the Interior, have good health and the required level of education, and have no criminal record. In this case, the length of service in the police by the time of admission to the group must be at least three years.

The first step of the candidate on the way to the group is an interview with an instructor for special training and the commander of the training group. They decide whether to allow the applicant to the qualifying stage or to refuse him in this.

The initial selection of candidates lasts for a day 3 and includes a medical examination, psychological testing, physical fitness tests, ability to use weapons, knowledge of hand-to-hand combat techniques. 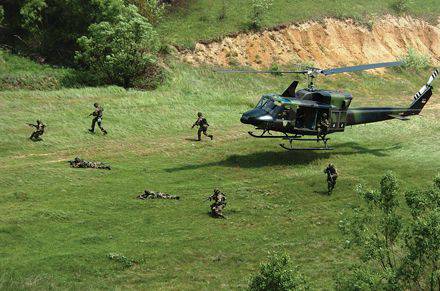 Physical tests include pushups, pulling up on a crossbar, climbing a rope, long jumps, squats, running 100, 1600 and 8000 meters. Those who meet the requirements and have passed the initial selection will continue to undergo a thorough medical examination, and then they will be offered a training course, which is divided into three parts: the selection and training, basic and specialized stages.

At the first stage, which lasts for 45 days, the candidate’s psychophysical abilities are studied, especially in relation to extreme situations in which any employee of the group may be in the course of his career. All candidates except physical exertion are subjected to severe psychological pressure. So those of them who are not ready for such stress leave the qualifying course.

Candidates are selected in the field, closest to the real situation in which PTJ employees are to act. Instructors who are responsible for the selection, closely monitor the candidates and make notes on all the actions and reactions of newcomers to the proposed tasks. Special attention is paid to the psychological, moral and volitional qualities of applicants. First of all, it is their intellectual abilities, emotional and social maturity, and motivation to serve in the unit. Only those who have scored a greater number of points and most closely comply with the requirements are allowed to the next stage.

The best candidates move to basic training with a duration of 180 days. During this period, they acquire knowledge in all areas that are necessary for the successful performance of their duties. They get acquainted with the used models of weapons, equipment and special equipment, the organization of daily activities, order and discipline in the group, etc. During this stage, selection is also conducted, and some candidates are eliminated. 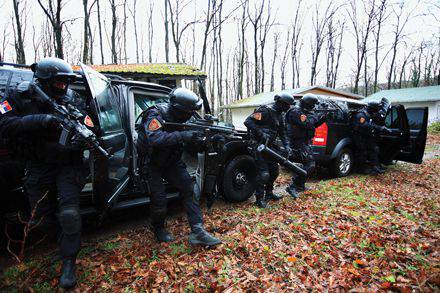 Trainings in the group are planned in such a way as to most closely match the actual conditions of the situation. The main types of training at this time are physical, fire and tactical training. Candidates who have successfully completed general training are grouped into teams depending on the results achieved. In the future, they continue their training in a particular specialty and gradually become involved in the daily life of the unit.

Training is carried out both at the headquarters of the group and in other areas of Serbia. PTJ employees regularly pass qualification tests to confirm their professionalism.

The Serbian anti-terrorism unit actively cooperates with colleagues both domestically and abroad. In the past few years, it has established close contacts with units from the region of the former Yugoslavia, as well as from Greece and Bulgaria. In addition, Serbian special forces interact with the French special forces RAID, the German group GSG-9, the Austrian GEK COBRA, the Russian Alpha and Vityaz, Israeli special forces, etc.

The motto of the group: "Many people think that they are the best, and we are."

PTJ Group, like any other special forces, has a full set of necessary weapons, equipment, equipment and vehicles necessary to perform the tasks of combating terrorism.

The uniforms of the PTJ officers have variations that correspond to the conditions in which the fighters have to act. Fighters choose this or that equipment in relation to the types of anti-terrorist actions, weather conditions, terrain, etc. Thus, each special forces unit has several sets of high-quality and convenient equipment.

As a rule, assault teams are dressed in black overalls of French, Serbian or American production. For actions in city blocks, special forces can wear a camouflage color pattern “figure” of domestic production, which combines gray, black and white colors. In rural areas, PTJ employees use classic camouflage or “digital” French and Serbian camouflage, which has a combination of khaki, green, sand and brown. If we talk about shoes, the fighters, as a rule, wear models of foreign manufacturers, designed for use in extreme conditions. 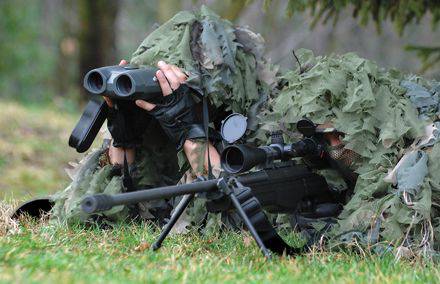 Mandatory types of equipment invasion teams are elbow pads and knee pads of neoprene, goggles, tactical gloves, a belt of domestic production of polymer and nylon, made according to NATO standards. Holster for personal weapons and all kinds of additional tactical equipment are attached to the belt.

For ballistic head protection in the group, various tactical helmets are used, as a rule, domestically produced. The first one is made of Kevlar and has a level of protection IIIA, the other one is a MD-05 S type half-helmet (corresponds to the American model TC-2001).

Pro-Tec helmets are used in the learning process (during climbing training, parachuting, assault actions, etc.), as they do not provide ballistic protection and can protect the head from being hit by stones, pieces of plaster, glass, etc. d.

The body of special forces is protected by a ballistic vest of modular MOLLE type of domestic production. The vest is good because it has the ability to add protection to the chest, back, sides due to the presence of special pockets in which additional armor panels are placed. For additional comfort and air circulation around the body, the vest is sheathed from the inside with a special breathable fabric.

As for personal weapons, PTJ employees prefer the excellent Austrian Glock 17 pistols, as well as the Italian Berretta Px4 STORM (both have an 9 mm caliber and are equipped with an integrated Picatttiny strap for mounting laser sights and a tactical flashlight). 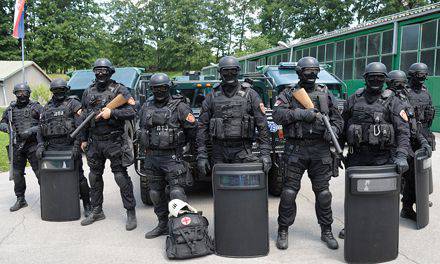 Automatic weapons are represented by the familiar Heckler & Koch MP-5 (versions A3, A5, SD5 and K-PDW). All of them are also equipped with laser sights, tactical flashlights, etc. In addition, there are also Zastava M-85 5,56 mm assault rifles. For long-range shooting, the group uses the American Colt M4 A1 Commando 0,223 mm carbine in combination with the Aimpoint CompM4 Red Hot laser sight.

The arsenal of the group also includes weapons from Eastern European countries of caliber 7,62 x39 mm, which has more power than previous samples. These are the M-70 AB2 automatic rifle and the East German version of the AK-47 MPI KM-72 Kalashnikov. At the same time, all these samples are devoid of wooden parts, they are replaced by plastic, a handle is installed in front of the forearm, a ergonomic butt at the back and a Picatttiny strap for mounting laser designators and optical sights.

Snipers are armed with Sako TRG manual shutter rifles with German optics manufactured by Leupold MARK 4 and Bushner. If you want to fire at significant distances, then in this case, the Serbian special forces use large-caliber American sniper rifles Barrett M-82 A1 with a Swarovski rifle scope. 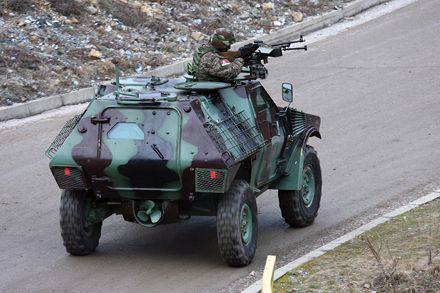 During the invasion of buildings and premises, the special forces use special equipment, including a French-made Dog Rider hydraulic press, as well as a tactical tool of domestic production, to break open the doors.