Despite the fact that the Australian Defense Army provides protection for the whole continent, the island of Tasmania and a number of other islands located in the Pacific and Indian oceans, its full strength is relatively small. The number of Australian armed forces today is barely more than 59 thousand people (regular troops), besides this, more than 21 thousand civilian specialists work in the armed forces. There are also approximately 22 thousands of reservists who can join the ranks of the armed forces at any given time. In the ground forces, a little more than 30 of thousands of servicemen serve, in the Air Force and Navy of the country there are almost the same number of soldiers (both there and a little more than 14 thousand people). The Australian Armed Forces are focused on working closely with the United States, giving Americans the right to use roughly 20 facilities located in Australia.

The Commander-in-Chief of the Australian Defense Army is the Governor-General. The general leadership of the country's armed forces is exercised by the Prime Minister, and the direct control is by the Minister of Defense. According to the country's constitution, the recruitment of the armed forces is carried out for hire. All members of the Australian army are contract servicemen. The duration of the contracts is from 3 to 6 years, followed by the extension of the contract for 3 year. The training of officers is carried out in the academy and military command and staff colleges of the Armed Forces, as well as in the higher specialized officers' schools and flight schools. The rank of private in the Australian army can get literally from the street. Sign up a contract can every citizen of Australia. Starting in 1990, contract service in Australia is also available to women. The number of women in the armed forces is constantly growing. According to some data, today every fifth soldier of the Australian army is a woman.

Service in the Australian army is a good option for employment. A lieutenant (4 of service in the navy) can claim a base salary of 64 thousands of Australian dollars a year or more 95 thousands of dollars with all possible surcharges (both amounts before taxes). A sailor in the fleet (2 of service year) can count on the base - on 45 thousands of Australian dollars a year or 69 thousands of dollars with all extra charges (also before taxes). For supplements, for example, include: long service, the cost of clothing and surcharge for sea trips. Also affect the salary: the formation of a contract, his rank and position. At the same time, sailors are allowed to take personal belongings with the army: bicycles, surfboards, musical instruments. During a trip on board the ship, they can play with each other on the console, in maps, chess, read magazines - all in order to brighten up the service.

As in other modern armies of the world, Australian military personnel can count on various benefits: full medical insurance, benefits for the purchase of real estate, additional pension. Each contractor who has served in the Australian armed forces for at least 10 years can count on annual leave of at least three months. Women soldiers are granted leave to care for a child for a week of 52, while for some reason only 14 of the first weeks of vacation is paid.

Ground forces are the most massive part of the Armed Forces of Australia. They serve a little over 30 thousand people. The army includes the 3 command: the military command (Forces Command), the command of special operations and the headquarters of the 1 division. The headquarters of the 1 division is used only as an operational body of military control when the ground forces of the country perform combat tasks under the overall command of the combined operations. The division has no permanent units subordinate to it. 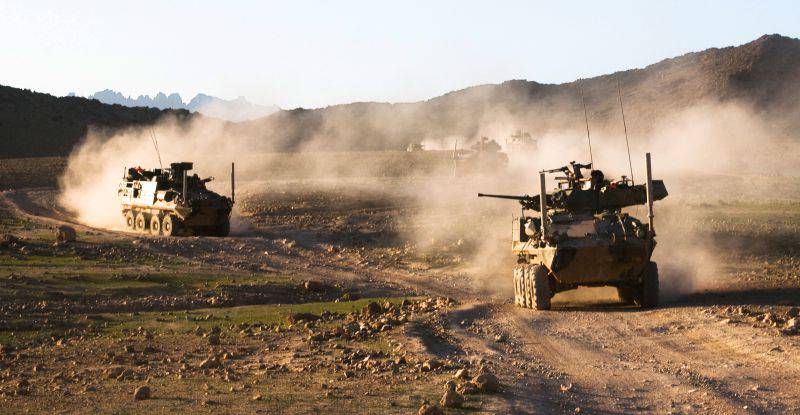 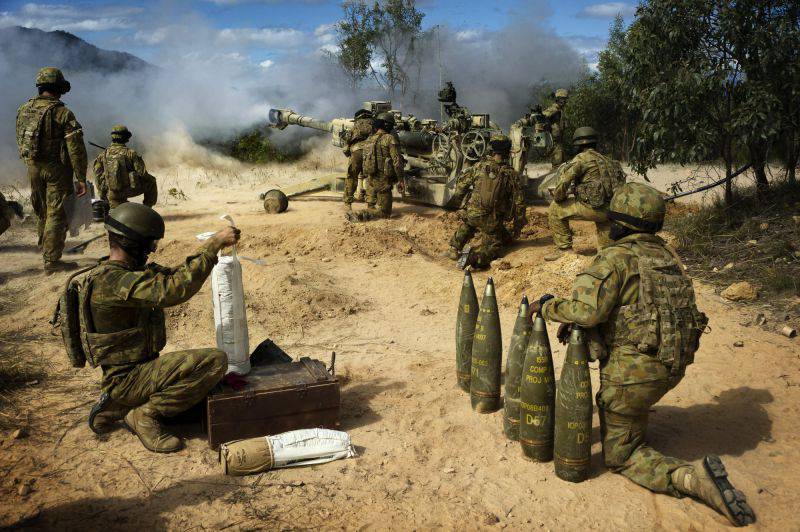 The 17 14th Logistics Brigade, which includes the headquarters, the communications regiment, the 3 Medical Battalion, the 3 Material Support Battalion, the Military Police Battalion, and one psychological impact unit on the enemy.

The reserve units, which are also part of Forces Command, are subordinate to the headquarters of the 2 division. They include 6 infantry brigades (4-I, 5-I, 8-I, 9-I, 11-I and 13-I) and one 8-i regiment of communication. Each of these reserve infantry brigades organizationally includes a headquarters, from two to four infantry battalions, reconnaissance and logistic and combat support units. 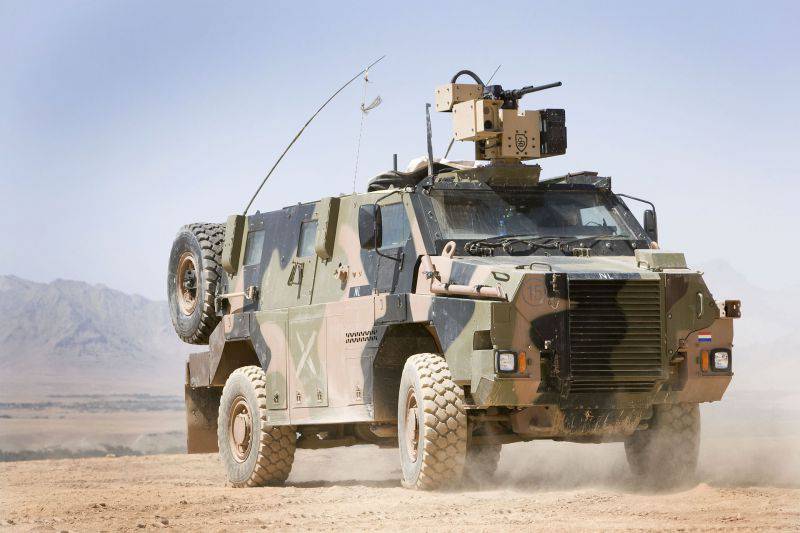 Given its small size, the Australian ground forces also have stocks of armaments and military equipment that are quite modest by the standards of many modern armies. The main battle tank of the Australian army is M1A1AIM Abrams, all vehicles were supplied from the US armed forces. In total, there are 59 such tanks in Australia; there are no more tanks in service with the Australian army. They are expected to be modernized; it is planned to allocate up to one billion dollars for these purposes.

Other armored vehicles are also represented by samples. weapons American and Canadian production. For example, the ASLAV-25 armored combat vehicle is an Australian version of the Canadian LAV-25 armored combat vehicle, armed with an 25-mm automatic weapon. In total, the Australian army is armed with 257 BBM ASLAV-25 of various versions (CMR, sanitary, etc.). In addition, the 431 American tracked BTR M113 continued to serve in the army, all of which were upgraded to the M113AS3 / AS4 level. In addition, in service is about 840 Australian-made Bushmaster PMV armored personnel carriers, more ordered 200 units. The Bushmaster 4x4 armored wheeled vehicle, developed by ADI, is able to transport up to 10 crew members (including the driver).

Australian artillery is represented by English 105-mm lightweight towed implements to support the infantry L119 (112 pieces), American 155-mm towed howitzers M198 (36 pieces) and US same 155-mm lightweight towed howitzers M777A2 (35 units, even 19 ordered). In addition, there are about 180 pieces of 82 mm F2 mortars. Self-propelled artillery installations in the Australian army is not.

The only means of air defense of the Australian army remains the anti-aircraft missile systems RBS-70 produced by the Swedish company Bofors. In total, there are 45 of such complexes capable of hitting targets at a distance of up to 8 kilometers and an altitude of up to 5 kilometers. 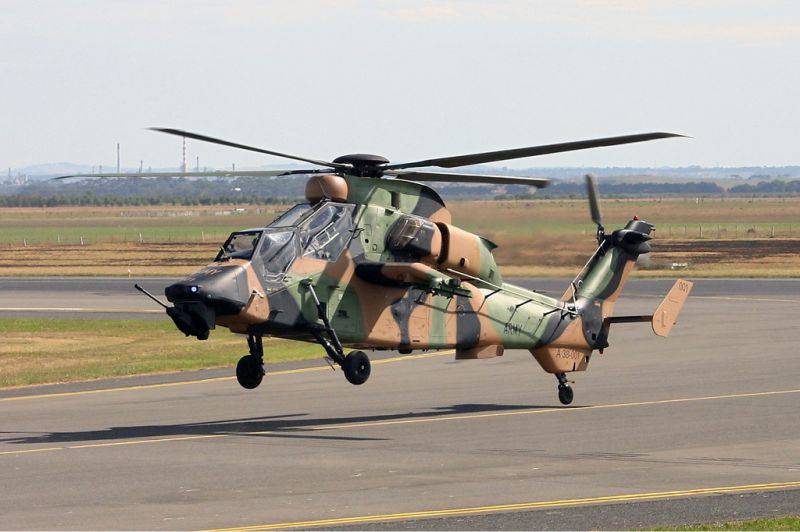 Anti-tank weapons are represented by Swedish-made M84 Carl Gustav 3-mm hand-held anti-tank grenade launchers, there are about 577 units. The most advanced are the American ATGM FGM-148 Javelin, all in service are at least 92 of such complexes.

As part of the army aviation is 22 shock European helicopter Eurocopter Tiger ARH (4 assembled in the EU, 18 in Australia). In addition, there are transport helicopters NHI MRH90 produced by the EU, 15 machines are available (a total of 40 helicopters have been ordered), American Boeing CH-6D Chinook helicopters 47, American Sikorsky S-35A-70 Black Hawk. Also available is the Bell OH-9A Kiowa 36 US reconnaissance helicopters.

The Royal Australian Navy serves about 14 thousands of troops. The main striking force of the fleet are 8 modern Aznak frigates (all built from 1996 to 2006 years), 4 frigates of the Adelaide type (1983-1993 years), which are American URO frigates of the Oliver Hazard Perry type and 6 diesel -Electrical submarines "Collins". 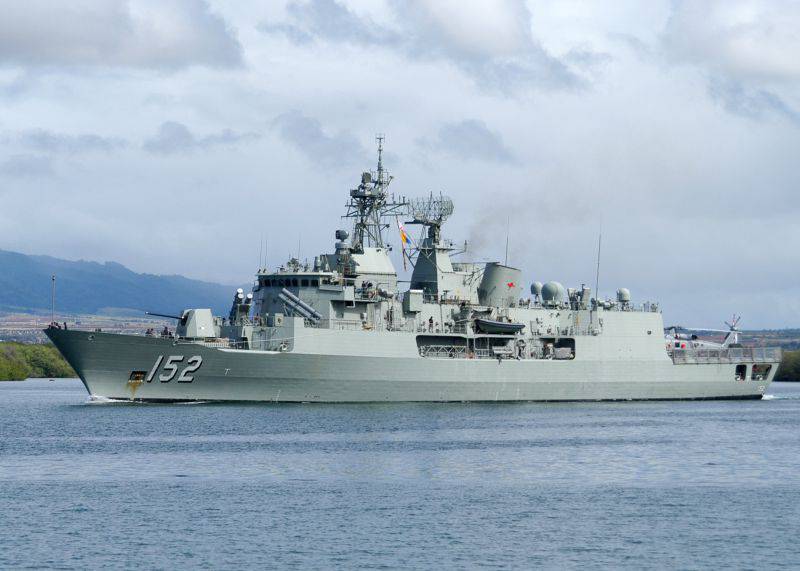 The Aznak frigates are a series of frigates built specifically for Australia and New Zealand. This project was jointly created by Australian Marine Engineering and German Blohm und Voss based on the MEKO 200 frigate of the latest popular export project. The Collins diesel-electric submarines were designed in 1987-1989 by the Swedish company Kockums, commissioned by the KWMF of Australia. According to the plans, they will remain in service at least until 2025 of the year.

In the near future, KVMS plans to commission three Hobart class air defense destroyers of its own design (commissioning in 2016, 2017 and 2019). Also, the Australian fleet has recently been supplemented by two Canberra-type amphibious assault ships (UDC) (adopted in the 2014 and 2015 years). The number of submarines in the fleet in the future is planned to increase due to the construction of 12 diesel submarines for the new project, for these purposes it was planned to allocate up to 40 billions of dollars. 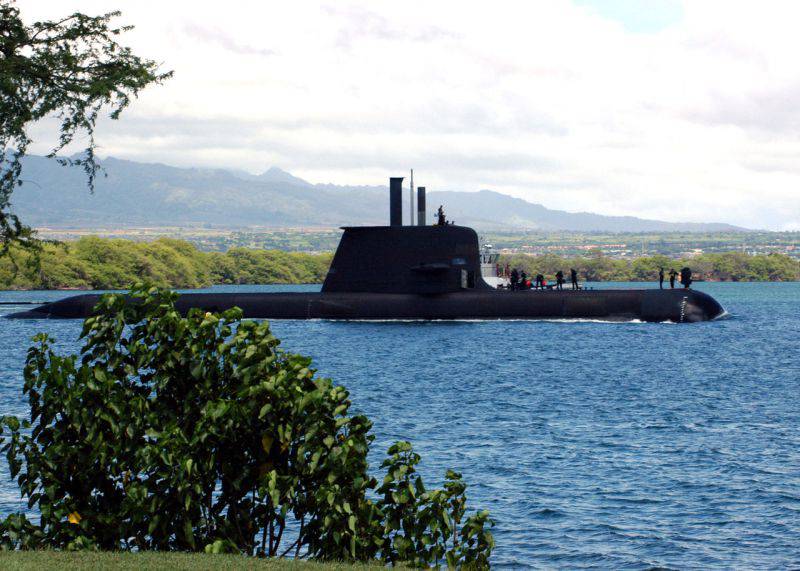 The Royal Australian Air Force serves about 14 thousands of troops. The main strike force KVVS are American fighter-bombers McDonnell Douglas F / A-18. In total, it is in service with the 54 McDonnell Douglas F / A-18A Hornet and 17 two-seat training and combat vehicles McDonnell Douglas F / A-18B Hornet. All of them were delivered in 1886-1990 years and are currently not in the best condition. Over time, all these machines are planned to be replaced by the X-Numx F-5A Lightning II fighter jets. The Australian military was ready to spend roughly 35 billions of dollars on the purchase of 100 such fighters, the first squadron is scheduled to receive on 10 year.

Against this background, the most modern Australian combat aircraft are the 24 fighter-bomber Boeing F / A-18F + Super Hornet, which were delivered from 2010 to 2012 year. In addition, due to the delayed delivery of the F-35A Lightning II fighter, the KVVS of Australia in December 2012 additionally ordered the F / A-24F + Super Hornet 18 fighter-bomber fighter in the US, of which 12 will be supplied in the EB-EA-18G Growler version of the aircraft. 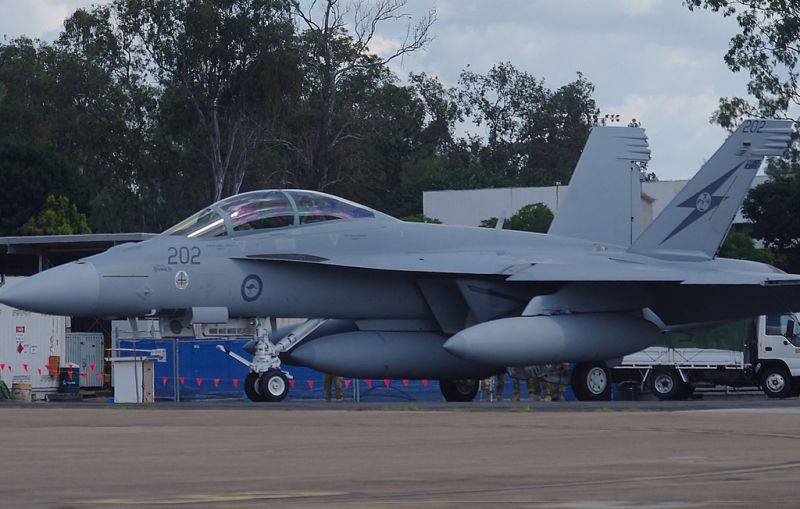