Why do we need scarecrows for Russian pilots in Syria?

November 18 2015
60
The participation of our VKS in the Syrian conflict has already become familiar. Fewer and fewer authors are figuring out the legality or illegality of this participation. And the constant successes of ground operations by the Syrian army even skeptics convince that the Russian aviation - not a soap bubble. She is acting. And the skill of Russian pilots can be envied by many Western aviators. 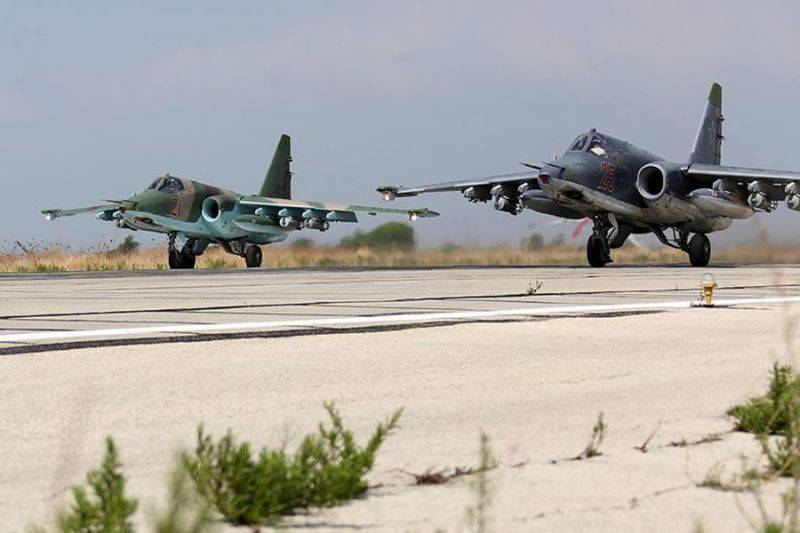 The coalition aviation is forced against this background looks completely helpless. Wherein news The channels and news agencies of European countries and the United States in every way inflate the successes of their aircraft. The paradox of the situation is that there is little success, but a lot of noise. It seems like they killed one of the leaders of ISIS during a raid, but with confirmations it’s frankly weak, and the leader is not such a leader, but, as they said at the Pentagon, we’re eating.

At the same time, Russia, even losing in the information war, raises respect for itself from the Arab and non-Arab states. More and more people are looking to Russia with hope. Perhaps precisely because they rarely watch TV. More often you have to look at the sky. No one is surprised that Iran or China are faster to contact with Russia than with any Western country.

That is why today there are informational orders for scarecrow materials. Materials designed specifically to create in the heads of Russian pilots, and perhaps the command, a sense of danger. The feeling of insecurity in themselves and their technique.

Recall a very recent company for the alleged appearance of ISIS MANPADS. Why supposedly? Yes, simply because some of these complexes really exist there. "Privatized" by those who fled from the government army. Stolen by deserters. And the delivery of several more problems will not solve and will not increase. Yes, and a great answer was given. I mean the sensational video of the attack of our "crocodiles" in the position of ISIS. I admit, I watched this video several times. I admired the skill of the pilots. But the main thing was not the case. The main thing in the work of these pilots.

Due to the characteristics of the combat use of helicopters, and to some extent attack aircraft - the most easily knocked down targets. Heights allow. Speed ​​especially. It seems to be hit, and only. Only here the pilots also know about it. And they learned to work relatively safely. At low and very low altitudes. When MANPADS simply does not have time to capture the target. And the designers were not idle.

And suddenly, as if by magic, the PR company MANPADS stopped. They are no longer discussing and are not going to deliver something there. To speak about the supply of more serious complexes, even Western experts can not. Any complex requires crew training. Yes, and work in one person can not. Need assurance vehicles. We need access to satellites, etc.

That is why a new scarecrow appeared. More precisely, the old as the world, but in this situation is new. And this scarecrow is that the planes of different states will meet in a very small ocean of air. Which is quite possible. Unless of course to calculate that aviation and the sun in general are led by idiots. And besides airplanes, there is nothing in the hands of these idiots. No satellite data, no ground reconnaissance data. No electronic intelligence data. Yes, and airplanes are equipped with avionics from the Second World War.

The leitmotif of the article was the assumption that ultimately Russian and Israeli aircraft would still meet in the sky of Syria. And this, perhaps, will lead to conflict between our countries. Not global, because an American expert still understands that there are no fools in both defense ministries of these two countries. And so. To air battles of local importance.

And the author relies on the events of the seventies of the last century. When indeed, such facts took place to be. Well, if we met forty years ago, it seems to be possible today. Well this type of Russian ...

Discard the attraction for the ears of this situation. Let's try to analyze on the principle - what if ... And what if our planes meet? By the way, pay attention, Peck completely excludes such a meeting with American aircraft. Why? Yes, simply because the Israelis are forced to equip their "American" aircraft with their avionics. Which, of course, is worse than the American version.

But for some reason in Israel there is a completely opposite opinion.

On arms of Israel are currently two types of aircraft. F-15 and F-16. And these very planes will have to shoot down our SU-30-e. Not even the experts now smiled. Stupidity? Suppose so. Although during the operation of these machines by the Israelis have accumulated quite a lot of experience. Only now they did not fight in air battles with an equal, and in our case, even superior in capabilities by plane.

Some of the readers will object. The Russians didn't fight either. I agree. That is why the first place in this confrontation is technology. Her capabilities. And weapons.

The fact is that it is precisely in the issues of armament that we and the Israelis went in different ways. This is due, among other things, to objective reasons. Simply put, the presence of one pilot in the cockpit. And the capabilities of the human body. It is impossible to control the machine and rockets at the same time. The brain does not work.

Israeli missiles do not have Russian capabilities. They are specially designed so that the pilot does not really think. Start - and that's it. The pilot's work has stopped. He is engaged in piloting. That, in fact, what should do. Plus, the opposition to what can fly into his car. Python 5 rockets are induced by thermal radiation without visual contact. And, therefore, they can easily go to the side if the radiation of some object is higher than that of an airplane. Elementary, yes? But Israeli goals and objectives are consistent.

Russian aircraft are equipped with much more diverse. In addition to infrared radiation, radar is also used. The operator does more than launch the rocket. He is able to bring it to the goal. This suggests that the probability of the victory of the obsolete F over the newest Su is extremely small.

The American expert, however, would not have been American if he had not advertised the great achievement of the USA, F-35. The fact is that Israel’s plans are really worth buying these cars next year. And they, according to the creators, are just able to resist 30. But only by design. The performance leaves much to be desired. Therefore, there is no sense in discussing this opposition. As, for example, the opposition of F-35 and our PACK. Or F-35 and Su-35. All this has already been discussed so many times on different resources, that one mention will suffice.

If you take it very seriously, then modern air combat is a somewhat broader concept. It is modern, and not work on the Papuans. Both the air defense system, the means of control, and the EW take part in it.

We especially note the most important thing for such battles. Air defense systems. We are so accustomed to globalization, that we are somehow not serious about our "Babies". Us if the air defense is certainly C-300. A better 400 or even 500. Meanwhile, in Syria there are beautiful complexes that can independently protect at the close approaches both the airbase and other military infrastructure. I write about "Carapaces". Interested readers are well aware of their capabilities. Including from our publications.

Therefore, the only global advantage of Israel is completely useless. I'm talking about drones. Bash them "shell" will be "on time." What we saw in the past exercises. But there is also "Krasuha".

So you did not succeed horror stories, dear (not really, honestly) an American specialist. It did not work for one simple reason. Idiots not only in the headquarters of the Russian army do not hold, but do not hold. In order to frighten something, you need to have something. And the confrontation of the Israeli and Russian pilots is the same stupidity as the ground war between our countries. Neither we nor the Jews need this. But if you need it, then I'm sorry, these are your problems.

Surprisingly some disrespect or even disregard for the American "special" in relation to Israeli allies. American pilots perfectly represent where Russian pilots work at a particular moment in time and space. And there the US planes do not even come close. So why should the Israelites do otherwise? Or, alternatively, our pilots just have to be in the area of ​​operation of the Israeli Air Force with the obligatory subsequent collision?

In general, of course, Michael’s "soul cry" probably turned out. He attracted interest in the United States. And this is important for him. And the fact that in Russia and Israel a lot of people read the opus “National Interests” began to twist their fingers to their heads, these are aspects for Mr. Peck that he would hardly even have to think about.

And the guys that are doing their military duty now in the sky of Syria, thank you very much. Keep going on. There you are - Russia.