November 16 2015
66
The echo of the terrorist attacks on Paris has swept (suddenly!) Through the Ukrainian blogosphere and the liberal fields of Russia. Also, what is called yesterday, “children of the speaking helmet” filled the segments of the Global Network with statements that if the assorted factions of “Syrian” terrorists are fighting Assad, the legitimacy of which is supported by Russia, then it is necessary for the “bratushkas” at least from “Al-Nusra” from ISIS to provide all possible assistance. For example, our regular readers are well aware of this, the deputy of the Verkhovna Rada of Ukraine Mr. Gerashchenko, through Facebook, threw a real cry about the need to share with terrorists the personal data of Russian military personnel performing combat missions in Syria. And the Internet cesspool in the face of "InformNapalmov" and other offspring of American intelligence agencies rushed to the aid of terrorists.


Under the actual slogan “ISIS (well, in the sense of“ very moderated opposition ”- our brothers, for they threaten the“ aggressor ”-Russia"), the Web poured into the network ... - About Russian pilots, about "bombed by Russian aviation hospitals ", about" brutally murdered bearded bread makers and pregnant girls. " With whose filing these publications were carried out - is understandable. Material about this was published on our website.

But shots and explosions thundered in Paris — and in the Ukrainian segment of the Global Network (the part that doesn’t depart from the burning of Maidan tires and pseudo-patriotic races), as well as in the segment of Russian liberal thought, there was a pause that was many times longer than the Mkhatovskaya one. After all, if we continue to publish materials about the need to support “perfectly modest” terrorists in word and deed, then in Paris they clearly will not understand. If you stop publishing an abomination, then what is the answer to those who have already distributed the overseas "cookies", and requires solving the tasks set? In general, they began to scratch the occipital parts of the skull boxes in search of an answer: “Shaw robit?” And, oh, joy on the Maidan street, overseas cookiemakers again came to the rescue ...

So, the US Secretary of State, who, together with his presidential chief, expressed, you see, the words of warm support for the Parisians and noted that "the United States stood and will stand next to France" (well, only across the ocean ...), found a formula for further information artillery preparation . While at the Vienna meeting to work out ways to solve the Syrian crisis, Mr. Kerry said:

Assad and the terrorist groups of Syria find contacts with each other for trade relations.

Kerry continues:
Assad himself attracts ISIS terrorists in order to buy oil from them and then resell it ...

Well, here it is the formula of happiness for the same Internet trolls, who fell into a stalemate after the terrorists committed several attacks on Paris. Kerry ruined ... According to Kerry, ISIS and Asad - it turns out to be a single whole ... They say they fire at themselves (all as in a well-known training manual) in order to powder democratised peoples with their brains thinking about even more freedom. They fire at themselves, then declare the need for mutual annihilation, but in reality they are playing a dirty political game against the white knights of democracy ...

Having grasped the essence of Kerry's statements, the Ukrainian "speaking helmets" and their Russian colleagues on the process of getting cookies with trebled force rushed to publish "exposing" materials. The materials boiled down to the fact that if “Assad is trading with ISIS, then Russia is in contact with ISIL, which means that Russia has incited terrorists to Paris.” This thesis with all the enthusiasm of the Maidan was discussed on Ukrainian Internet forums and central TV channels. "Democratic" Russian media also began to discuss this issue. Well this is just a holiday of some kind ... High Kerry live forever! ..

In order to make the white knights of democracy become even whiter, in the Western media they began to publish with enviable consistency about how they literally destroy the leaders of the same ISIL with bundles, and destroy them in various countries. Did not have time Reuters publish a statement from someone very informed about whether Mohammed Emvazi, better known as “Jihadist John” who cut the heads of the prisoners, was eliminated in Syria or in Iraq, and now a new “anti-terrorist” peremoga. The Pentagon announced that the leader of the IG terrorist cell was liquidated in Libya. They called his name (everyone, you know, they know by name, but somehow they didn’t go well in the fight against igilovtsy ...) - Abu Nabil. Coming out of the rostrum of the main US military department, its official representative Peter Cook, with emotions overflowing his chest, said:

Yes, the leader of the Libyan IG cell has been destroyed. And this shows that we will pursue the leaders of the "Islamic State" wherever they are and where they act.

That is, the Pentagon is showing something to someone ... - Just see what an irreconcilable fight with pocket (oops, burst out) terrorists are the United States of America! Assad, you understand, is trading with ISIS, and we (the US) are making the world a better place by destroying the leaders of terrorists. If we destroy one, we will prepare three (oh, it has escaped again) ... Paris, we (the USA) are with you ... From across the ocean ... 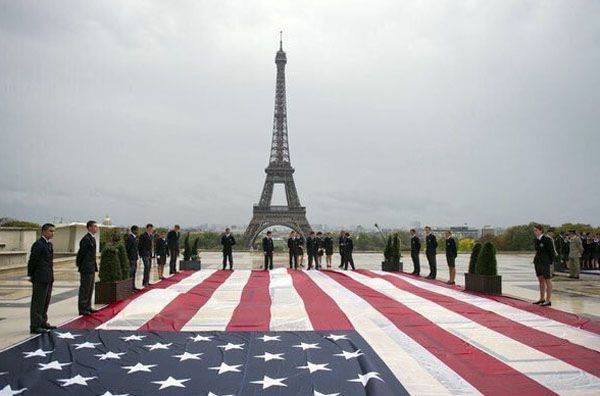 The question arises: if the American "partners" talk about the pursuit of terrorists everywhere, then how did it happen that with the presence of a system of total surveillance, the process of preparing militants for an attack on the French capital was missed? To prevent such “wrong” citizens from having such questions, the United States announced that, say, the system was a system, but the terrorists, it turned out, used “encrypted communication channels, anonymizers”. And in general on the Internet, all self-respecting terrorists are sitting through Thor ... And, you understand, the American special services could not decipher the information of the encrypted channels. Merkel and Hollande listen much easier. Anyway, Snowden is to blame, since he “merged” the process of “anti-terrorist” work, and the terrorists became more careful (all more “bristled” and “bristled”) to conspire their activities. And if Snowden is now in Russia, then here, of course, Moscow is to blame for everything. Now she helps Assad with IG to sell oil, then through Snowden it prevents American intelligence agencies from opening the militants ’communication channels. Give me another package of sanctions! .. And they will give ...

In this regard, it is worth noting that the frequent conversations that after the Paris attacks of the West will take and zarudit with Russia, "forgive" everything looks more than naive. The whole system of encouraging international terrorism was not formed by “friends”. The Paris attacks, their real customers, prepared as an attempt to provoke the anger of the weak European community by an influx of migrants, provoke interethnic and interfaith bloody clashes, destroy the last contours of the Old World core and, if possible, drag France into a military operation in the Middle East. RIA News on the eve published a translation of the report of the American analytical agency Stratfor (often referred to as a private alternative to the CIA), which refers to the need for Paris to consider the possible start of a ground operation in Syria and Iraq. At the same time, the report is not so much an analytical, as it is quite a target designation. From the report on "how France should act":

France has a number of opportunities for retaliation, but the answer is determined by who will be responsible (for the attacks). If it is determined that the IG stands behind the November 13 attack, then France will very likely strengthen its air operation in Syria. But the Syrian airspace is already overloaded with military aircraft of Russia and the American coalition, and therefore France can intensify actions against the IG either in Iraq or in Libya. Another possibility could be to strengthen the program of training and equipping anti-Igil forces in Iraq and Syria, and even to conduct combat operations against key militant leaders.

Remarkable advisory analytics Stratfor, is not it ... Terrorists in sleeping, waking up and already awakening cells have already flooded Europe, and France are pushing to send troops into Syria, Libya or Iraq ... Like, well, enter at least you somewhere ... Enter to your home it was quieter to dismantle to solve our (those who distribute advice) economic problems.

Ctrl Enter
Noticed oshЫbku Highlight text and press. Ctrl + Enter
We are
Results of the week. “Well, if you don't want anything else ...”Syria: Americans scare themselves, and Asma Asad buys chairs
66 comments
Information
Dear reader, to leave comments on the publication, you must to register.