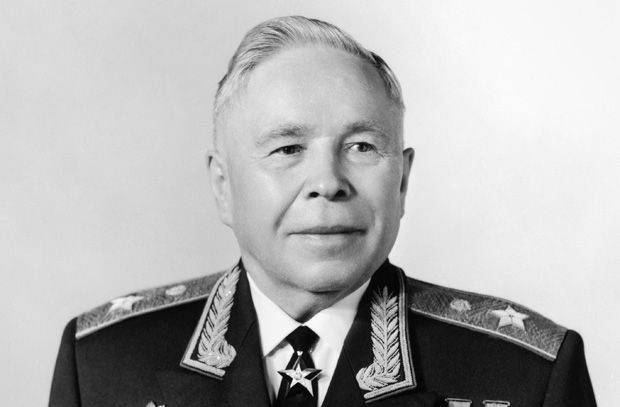 Soviet Army General Athanasius Beloborodov is one of those generals of the Great Patriotic War who fought from Moscow to Germany, and then smashed the Japanese militarists. "Russian Planet" will tell about the battle path of one of the commanders of the most terrible war and its difficult fate after the great Victory.

From Irkutsk Cossacks to Soviet officers

The future general, who stormed German Koenigsberg and Chinese Harbin, was born in the Irkutsk province 31 in January 1903, into a family of hereditary Cossacks. The entire XIX century special Irkutsk Cossack regiment guarded the border between Russia and China and was disbanded only at the end of the century, when the borders of our state moved far to the east. Former Cossacks became simple peasants. In one of these families, who lived a few miles from Irkutsk, was born the future Soviet general.

The father of the future general was baptized in the name of Palladium, but the neighbors-peasants pronounced the unusual name differently, in their own manner, Pavlantius. Therefore, in all already Soviet documents, the future army general appears as Afanasy Pavlantevich.

The first time under the guns was Athanasius in 1919, at the age of 16, when, following the example of his older brother, he joined the Irkutsk partisan detachment who fought against the White Army of Kolchak. The ill-conceived internal policy of the white admiral then caused mass peasant uprisings throughout Siberia.

Young Athanasius did not stay long in the Soviet partisans, but it was then that he decided that he would definitely be a professional soldier. And in 1923, he became a cadet at the Irkutsk Infantry School. Later, he recalled his years of study like this: “It was easy for me to do military business. I especially liked tactics ... I liked the military topography very much, but from the very first classes I understood: I needed to learn mathematics, I am very weak in it. And there were artillery tasks ahead, here there is nothing to do without knowledge of mathematics. I sat down at the textbooks and said to myself: no Saturdays and Sundays ... ”.

Becoming a cadet, Athanasius Beloborodov left Irkutsk forever, in subsequent decades his military fate will leave him all over Eurasia - from Prussia to China, he will not return to his hometown anymore. In 1926, Beloborodov became the commander of an infantry platoon in the 2 Amur Infantry Rifle Division. Soon, his platoon was considered one of the best in the division, and a young promising commander in 1928 was sent to study in Leningrad for "military-political courses."

The infantry commander was supposed to be the political commissar of the Bolshevik Party in the army, but fate was different. Already in the 1929 year, as a political commissar (commissar) of a company in Transbaikalia, during the armed conflict of the Soviet Union with the Chinese on the CER, Athanasius Beloborodov led his company after the commander was killed in the attack. Following the results of that local war, Beloborodov received his first award - the Order of the Fighting Red Banner. Despite the fact that he was offered a higher position of political worker, he decided to remain a combat commander, forever devoting himself to military affairs.

In 1936, Beloborodov successfully graduated from the Frunze Moscow Military Academy, the highest military educational institution of the Soviet Union. Among the subjects studied was the Japanese language, in case of war with Japan.

After graduating from the academy, Beloborodov was offered the position of adjutant of Marshal Blucher, who then commanded the Special Far Eastern Army. But the young officer wanted a real military, not a staff service - he refused this flattering offer and in fact saved himself: at the end of 30, many of Marshal Blucher’s entourage became victims of political repression.

The years of the Great Patriotic War

By the beginning of 1941, Afanasy Beloborodov with the rank of lieutenant colonel led the department of combat training of the Far Eastern Front. Immediately after the start of the war, he submits a report on the transfer to the active army, and in July, 1941 was appointed commander of the Siberian 78 Infantry Division. All summer, Beloborodov was preparing his soldiers, among whom there were many conscripts from his native Irkutsk, for future battles. In October 1941, the division was transferred to Moscow, at the very edge of the German offensive. 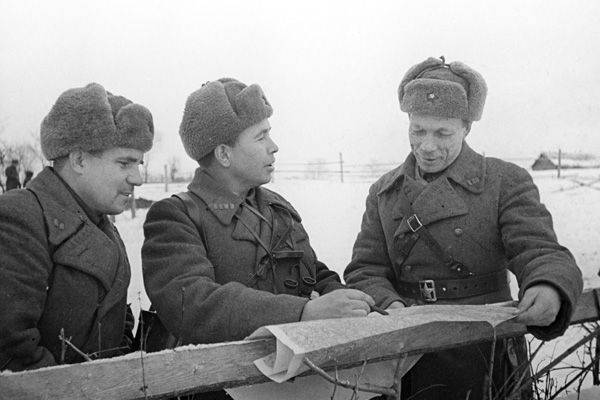 Afanasy Beloborodov (center) with his headquarters. Defense of Moscow, 1941 year. Photo: Alexander Kapustiansky / RIA News
All November, soldiers of the Beloborodov division fought with the advancing Germans in the Volokolamsk Highway, one of the main transport arteries leading to the capital of the Soviet Union. The opponent of the soldiers of Beloborodov was the SS division "Das Reich", one of the best in Germany.

As a result of these battles, the 78-Infantry Division was awarded the Order of the Red Banner and received the honorary title of the 9 Guards. During the counteroffensive near Moscow 13 on December 1941, the Beloborodov division proved to be worthy of the Guards: it immediately crossed the Istra River, although the retreating Germans blew up the Istra reservoir, and the Soviet soldiers had to attack through unfrozen icy water.

Following the results of the battles near Moscow, General Beloborodov received his second Order of the Red Banner. Since October, 1941, the Beloborodov Division has been continuously engaged in combat for seven months, and only in April, 1942 was taken to the rear for rest and replenishment. The division was again thrown into battle in July of the same year, already as part of the Stalingrad Front.

At the end of October, 1942, Afanasy Beloborodov, already in the rank of Major General, headed the 5 Guards Rifle Corps, which included his Guards Division. The next three months, until the end of January 1943, the corps of Beloborodov participated in the Velikiye Luki offensive, diverting the German reserves from themselves so that they would not be transferred to Stalingrad, where the fate of the war was decided. For these battles Beloborodov was one of the first to be awarded the Order of Kutuzov.

In the summer of 1943, at the height of the Kursk battle, the corps of Beloborodov fought north, in the Smolensk region, again diverting the enemy’s reserves to himself. Following these heavy battles, the general was awarded the Order of Suvorov. In December 1943 years Beloborodova body involved in a successful environment and the defeat of the seven German divisions in the Vitebsk region. As a recognition of the military merit Beloborodov gets the rank of lieutenant general.

May 22, 1944 Beloborodov becomes commander of the 43rd Army (11 infantry divisions and 2 tank brigade), which will be led until the end of the war. In the summer of that year, Beloborodov’s army fought all over Belarus with battles, in the fall it took part in battles in Lithuania and Latvia, forming the so-called Kurland boiler, that is, cutting off almost 400 thousand German soldiers and officers from land communications with Germany.

In January, the army 1945 Beloborodova being moved to East Prussia, in April, she participated in the storming of Konigsberg. 5 May 1945 of the year Afanasy Beloborodov receives the rank of colonel general. 9 May he met near Danzig, accepting the surrender of one of the German armies.

25 June 1945 of the year Beloborodov was among the generals who were invited to a reception in the St. George Hall of the Grand Kremlin Palace on the occasion of the victory over Germany. Here was the only meeting of Colonel-General Beloborodov with Stalin. Bypassing his generals, the leader of the USSR clinked his glass with a glass of Athanasius Pavlantevich, saying: “I wish you a hundred years of life, Comrade Beloborodov!” - “And you are two hundred, Comrade Stalin!” The 42-year-old general answered without a loss.

In those days, Beloborodov was already preparing for a new war, and three days after the meeting with Stalin he immediately went to the Far East, not stopping even in his native Irkutsk. Beloborodov was appointed commander of the 1 of the Red Banner Army of the 1 of the Far Eastern Front. In August, 1945, the army (six tank divisions and three tank brigades), overcoming several days the taiga forests considered impassable, began to smash the Japanese troops in Manchuria.

In less than a month, Beloborodov’s army fought 450 kilometers and, having lost all 598 people killed, destroyed over 30 thousands of Japanese soldiers and 87 thousands captured. For the victory over Japan, General Beloborodov was awarded the Order of Suvorov of the 1 degree.

And after 1945, Afanasy Beloborodov served in the most responsible positions. So, from 1947 to 1953 the year he commanded the Soviet 39 th army, located on the territory of China in Port Arthur. Then it was one of the most militant armies of the USSR, which was ready every day to go on a military campaign if the Soviet Union decided to openly intervene in the civil war in China or in the fighting on the Korean Peninsula.

In 1954, in the homeland of the general, in Irkutsk, his bronze bust was installed - this difference was relied upon by all who were awarded the title Hero of the Soviet Union. Since 1963, General Beloborodov commanded the most central military district of the USSR - Moscow. Here he had to be not only a military man, but also often a diplomat. So, it was Beloborodov who received the French President General Charles de Gaulle during his visit to the USSR in 1966. 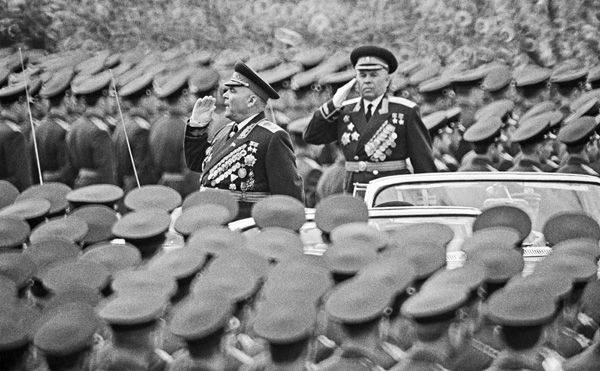 USSR Minister of Oborna Marshal Rodion Malinovsky (left) and Commander of the Moscow Military District Athanasius Beloborodov at a military parade in honor of Victory Day. Photo: Eugene Kassin / TASS
In October of the same 1966, General Beloborodov got into a serious car accident, two years after terrible fractures he spent motionless in a hospital bed. Realizing that he can no longer fully command the troops, and not wanting to become a “wedding general,” Afanasy Beloborodov, in May 1968, he himself submits a report about his resignation from the post of commander of the Moscow Military District.

Barely recovering from the consequences of the accident, he began to write his memoirs about the Great Patriotic War. Retired General Beloborodov became the author of five historical books. His memoirs about the defense of Moscow, "War Feat", were published not only in the Soviet Union, but were also translated into English, Spanish and Arabic.

In his books, an experienced winning general pondered a lot about the specifics of a military case: “To take the right decision with the most severe time limit, with a lack of information about the enemy, you can always, if you know your business, your people, your weapon; if you accustom yourself to the fact that a promising decision in battle is most often a daring decision, and audacity, in turn, entails a certain risk ... ”.

For his long biography of professional military Athanasius Beloborodov was twice awarded the title Hero of the Soviet Union, awarded 16 with Soviet and 3 foreign orders, 18 with Soviet medals (including medals "For the Defense of Moscow", "For the Defense of Stalingrad" and "For the Taking of Koenigsberg" and XNMX) foreign military medals (two of which he had received from the Chinese government for the command of the Soviet army at Port Arthur).

In the summer of 1990, already realizing that his days were numbered, General Beloborodov dictated a will asking him to bury him on the 41-m kilometer of Volokolamsk Highway near the mass grave of the defenders of Moscow. Afanasy Pavlantievich Beloborodov passed away on 1 on September 1990, and five days later he was solemnly buried where he had asked in his will. The mourning ceremony was attended by soldiers of the Moscow Military District, a delegation from his native Irkutsk and Vitebsk liberated by him, as well as cities near Moscow, for which the general fought valiantly in 1941 year.

Ctrl Enter
Noticed oshЫbku Highlight text and press. Ctrl + Enter
We are
Cossacks todayCossacks in the Wehrmacht and the SS
5 comments
Information
Dear reader, to leave comments on the publication, you must to register.