Ukraine bored on the sidelines of world attention

November 16 2015
36
The Foreign Minister of Ukraine, Pavel Klimkin, in an interview with the local television channel Ukraine Today, stated that the peace process in the east of the country is in jeopardy due to escalating tensions in the region. At first glance, it is strange that Klimkin was so preoccupied with peace in the Donbass, because the “Norman Four” literally pulls the Ukrainian leaders by their shoulders to fulfill the Minsk agreements. Probably, the thing is that Ukraine has gone from the first tasks of the international agenda, giving way to the problem of refugees in Europe and the war in Syria. Now the head of the Ukrainian Foreign Ministry hints to partners that Ukraine is ready to reclaim the attention of the world community even through the escalation of the conflict in the Donbas. After all, whatever they say, the key to peace in the East of Ukraine today is in the highest offices of Kiev. 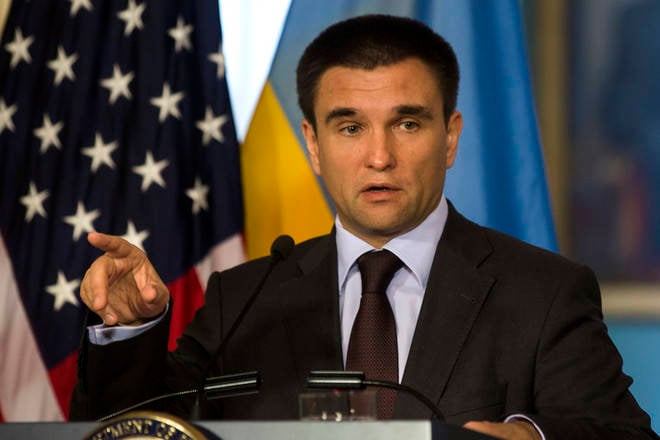 It cannot be said that Ukraine is now deprived of the attention of international structures. Federica Mogherini, EU High Representative for Foreign Affairs and Security Policy, visited Kiev this week. The mission of the International Monetary Fund (IMF), headed by Ron van Ruden, began work here on Thursday.

Federica Mogherini was primarily interested in the association agreement between Ukraine and the EU, which in six months should come into force in full. In Europe, a new free trade zone will appear. Mogherini inspected the preparations for this important event for the parties.

The mission, led by van Ruden, also arrived in Ukraine with good intentions. She should prepare recommendations for the IMF executive directorate on the provision of the next tranche of financial assistance to Kiev. But the main thing is that the materials of the van Ruden mission will help the Board of Directors of the International Monetary Fund to introduce new rules that will allow Ukraine to lend in case of default due to non-payment of three billion dollars of Russian debt.

Focused on Ukraine and US Treasury Secretary Jacob Lew. In Kiev, he met with Prime Minister Arseniy Yatsenyuk. On the eve of the visit in an interview with BBC, Lew expressed the hope that Russia would reconsider its position on the restructuring of Ukrainian debt.

In a word, Ukraine has international support. Not deprived of it and attention. So why was the head of the Ukrainian Foreign Ministry nervous? Observers have noted a certain fatigue of Western politicians from the unsolved problems of Ukraine. In particular, the report on the visit to the Ukrainian capital of a high-ranking European diplomat in the local information and analytical publication was called “A suitcase without a handle for Mogherini.” The author used this image to emphasize once again: Ukraine today is not ready for an equal partnership in the free economic zone opening in the new year.

There is a basis for such a conclusion. This year, for example, there is already a preferential trade regime for Ukraine, which the European Union introduced unilaterally. However, he did not bring much benefit to Kiev. Export volumes are reduced from month to month. Supplies of Ukrainian goods in different positions fell by 20-40 percent. In general, if last year, Ukrainian exports to the EU amounted to about 17 billion US dollars, now it will barely exceed 12 billions. A similar picture with the import, reduced by more than a quarter this year.

There are objective reasons for this. Ukrainian economist Oleg Ustenko, executive director of the Blazer International Foundation, writes: “We must understand that the Ukrainian economy will fall by 2015 percent by the end of 11, and last year its volume decreased by about seven percent, a year earlier - the fall was 0,5 percent. The cumulative drop in the last three years is fixed at practically twenty percent. ”

In other words, there is nothing much to sell to Ukraine today with the European Union. Economy after the Maidan seriously subsided. Hopes to fill the turnover at the expense of agricultural products also did not materialize. The European market is oversaturated with locally produced food, for which Russia has closed due to counter-sanctions. Even the preferential trade regime did not allow Ukrainian farmers to press European farmers on the counters of the European Union.

In the new year, this problem will become even more acute. Russia's Economic Development Minister Alexei Ulyukayev has already warned of a possible Russian embargo on Ukrainian agricultural products after the introduction of a free trade regime between the EU and Ukraine. This means that the volume of food sold on the Russian market today, in 2016, is likely to remain in Ukraine.

But this is only a fragment of the overall picture. This is how the professor Oleg Soskin described it as a whole on the Ukrainian Business TV channel: “I have already explained to all people a hundred times that we are in default. Country in bankruptcy: September Eurobonds did not pay, November 600 million did not pay, did not restructure 550 million of Kiev’s debt - creditors refused. There is no money for gold reserves now. They are now called not “gold reserves,” but “international,” that is, they are “between nations” in Washington. ”

Professor Soskin will not blame the pro-Russian sympathies. For many years he worked in two administrations of Ukrainian presidents (Kravchuk and Kuchma). He was an economic consultant, advisor. Now he turned to the critics of Petro Poroshenko, because he really sees: the industrial potential collapses, the cost of public services and unemployment increase, revenues to the state budget are reduced, control over strategic sectors of the economy and finances are lost. That is, the troubles that the experts scared Ukraine when it joined the association with the European Union, came today.

Finally, the Ukrainians were upset about this statement by Federica Mogherini: “European politicians need time to prepare their voter for a visa-free regime with Ukraine.” In Kiev, they did not even assume that the citizens of the European Union did not support politicians from Brussels in everything. Meanwhile, the Institute for World Politics conducted a study that yielded interesting results: 84,7% of Europeans believe that corruption is hindering Ukraine’s movement towards the EU, 72,5% is blamed for oligarchs, 56,9% is seen as an obstacle to the country's insufficient economic development, and 46% of respondents generally associate Ukraine with war.

Continuation of the war can demolish the Ukrainian authorities

A day after Mogherini’s departure, Minister Pavel Klimkin hurried to Ukraine Today TV channel. Here he gave vent to emotions. According to the minister, "we did not have any sustainable truce, it was a very fragile process." In recent days, this problem has become even more urgent. Pavel Klimkin convinced the viewers that the militia did not withdraw weapon from the line of contact, and hide it. According to the head of the Ukrainian Foreign Ministry, this problem cannot be solved until the Kiev authorities "do not have full access to the Donbass."

From these words it is very clear who initiates a new tension in the East of Ukraine. The day after Klimkin’s speech at Ukraine Today (November 13), a representative of the Ministry of Defense of the Donetsk People’s Republic Eduard Basurin said: DNR intelligence recorded a transfer to the contact line of more than 20 Ukrainian tanks and rocket artillery.

In the town of Dzerzhinsk, ten tanks took up positions five kilometers from the contact line; twelve tanks of the Ukrainian army arrived in Novogorodskoe. They are located six kilometers from the demarcation strip. Five rocket launchers “Grad” came to Nikolayevka.

Meanwhile, such military weapons before September 1 were supposed to take deep into the rear. According to the agreement concluded at the end of September, from the contact line to November 10, the armament should be removed with a caliber less than 100 millimeters. Instead, tanks and Grads returned to firing positions.

New exacerbation of the situation began not yesterday. In an interview with Deutsche Welle correspondent, Deputy Head of the OSCE Special Monitoring Mission Alexander Hug noted that in the past two weeks, the SMM again recorded deaths and the continuation of the conflict. “We are registering ceasefire violations. Most of them occur near the Donetsk airport. In recent days, the situation has been slightly discharged, but the fact that people are dying indicates the extreme fragility of the truce. ”

It seems that the Ukrainian authorities are ready to once again unleash a war for “full access to the Donbas”. This will return the attention of the world community to Ukraine. The background will leave uncomfortable questions about a ruined economy and impoverished people. European politicians will defend the new government; America and its international financial institutions will help with money. Before the threat of big trouble, the population of the country will unite.

It was. It seems that Pavel Klimkin and his leaders hope that all this will happen again. Professor Oleg Soskin has a different opinion on this subject: “The bloody revolution, the bloody third Maidan has already passed, and people are already measuring everything through blood, through life, through death, through war. And they (the leaders of Ukraine - GG) behave in the same way as under Kuchma, under the “beekeeper”, under Yanukovich. That is, this life has not taught them anything. And they do not understand that their demand will be different. Because thousands of people were killed, tens of thousands were injured, became cripples. ”

Oleg Soskin openly said this to all Ukrainian viewers of the Business TV channel. Such recognition is worth a lot. People understand that the current Kiev authorities may not survive the continuation of the war in the east of Ukraine ...

Ctrl Enter
Noticed oshЫbku Highlight text and press. Ctrl + Enter
We are
Refugees from Syria. Will Russia accept immigrants from the Middle East?Situational analysis of the death of the MH17 flight (Malaysian Boeing 777), made on the basis of engineering analysis from 15.08.2014
Military Reviewin Yandex News
Military Reviewin Google News
36 comments
Information
Dear reader, to leave comments on the publication, you must to register.