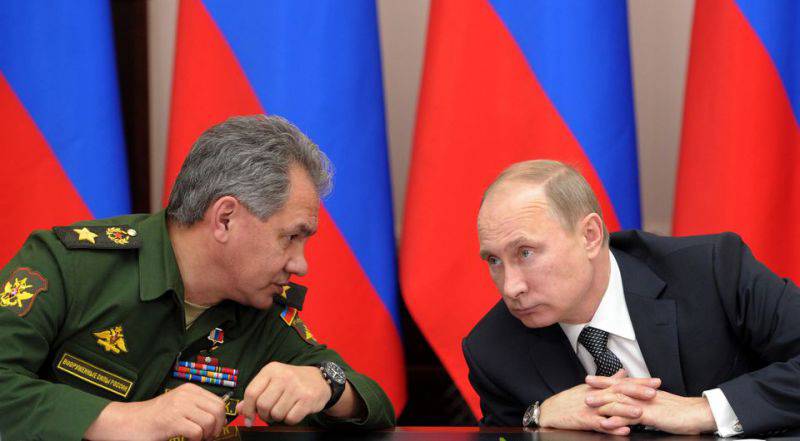 A reliable and loyal Minister of Defense is the only one who has worked continuously in the government since the collapse of the Soviet Union. He may become the next president.

On October Vladimir Putin’s birthday in October, Defense Minister Sergei Shoigu brought him a present: the latest summary of the Russian military campaign in Syria. Among other things, it was reported that cruise missiles launched from the Caspian Sea region hit targets at a distance of almost 1,500 kilometers. “We know how complicated such operations are,” Putin said approvingly. The couple celebrated their birthday by playing hockey in their amateur club. Putin scored seven goals, and Shoigu another one into the bargain. Their team won a landslide victory.

When Shoigu at the end of 2012 took over the reins of the Ministry of Defense, his partnership with Putin shifted from the hockey rink to other areas. The Russian armed forces have become the main instrument of Putin’s foreign policy. In the Crimea, in the east of Ukraine, on the borders of the airspace of NATO, and now in Syria, Russia demonstrates its power unexpectedly effectively. Under Shoigu, the Russian army "shows such fighting efficiency, organization and skill in logistical support issues that we have not seen before," said Evelyn Farkas, who until recently worked in the Pentagon as head of the Russian direction.

But Shoigu is not just a new Russian defense minister. In his 60 years, he is three years younger than Putin and is the main long-liver in the Russian government, working there from the 1990 year, that is, before the collapse of the Soviet Union. At that time, an unknown Putin was working in the city hall of St. Petersburg. Shoigu received fame as head of the Ministry of Emergency Situations (MES), which is a paramilitary rescue service with extensive powers. He himself created this ministry and headed it almost 22 of the year. Skillfully maneuvering in the labyrinths of the Russian bureaucracy, Shoigu gained power and popularity without making himself visible enemies. “There’s no one in the ruling class,” says Yevgeny Minchenko, an analyst for the Russian elite, who studies the Russian elite. - This is absolutely unprecedented история».

Russia is a country of emergency situations, starting with droughts and forest fires, and ending with sinking submarines, apartment bombings and dramas with hostages in schools. The latest incident was the crash of a chartered plane in the sky over the Sinai Peninsula, which could have been a terrorist act. It is therefore not surprising that the Minister of Emergency Situations has become one of the most famous figures in Russian politics. Although Shoigu does not belong to Putin’s cohort of former KGB officers from St. Petersburg, he is a confidant of the president’s inner circle. Minchenko, who annually publishes the 2.0 Politburo report, which diverges a large number of copies, puts Shoigu in second place in terms of influence after the head of the presidential administration, Sergei Ivanov. When important decisions are made such as operations in Ukraine or in Syria, Shoigu becomes indispensable. He is loyal, competent and popular, and therefore is one of the few potential successors to Putin.

Shoigu grew up in southern Siberia, in the little-known republic of Tuva. He loved sports, fights in the yard and risky stunts, jumping in the spring from ice to ice on the mighty Yenisei. Because of such antics, he was given the nickname "Shaitan". After receiving an engineering degree in Krasnoyarsk and carrying out a number of successful construction projects, in 1990, Shoigu was transferred by decision of the leadership of the Communist Party to Moscow. Having worked in the architectural committee, he became the head of the new at that time rescue corps, turning it into a highly efficient organization, which eventually became known as the Ministry of Emergency Situations. He also displayed inflexible fidelity, coming to the aid of Boris Yeltsin after the coup attempt in August 1991, and then during the constitutional crisis in October 1993.

In the chaos of 90, Shoigu reassured him with his presence and work and gave confidence. Along with extinguishing fires and eliminating the consequences of catastrophes, he mediated conflicts in South Ossetia, Tajikistan, and Chechnya. In 1999, when Yeltsin was preparing to transfer power to Putin, his team chose Shoigu to head the new political party, Unity, which was later transformed into United Russia, which is the ruling party today. Yeltsin called Shoigu "our brightest star."

When Putin came to power, his strategists had to introduce an amorphous new leader to society. Former Kremlin adviser Gleb Pavlovsky says that the administration “consciously built” Putin’s image in part in the image and likeness of Shoigu. “Putin also had to be made a lifeguard,” he says. Shoigu, who never showed a desire to engage in party politics, wisely decided to leave the center of the stage. As Pavlovsky says, he understood that "one log of two bears will not hold."

Instead, Shoigu began to rub in confidence. In 2000, he gave Putin a black Labrador Kony, who became the president’s favorite dog. He accompanied Putin in his adventures and trips, when he courageously posed with a naked torso. As a true patriot, he spent his holidays in Russian forests, and not on the beaches of France. Putin and Shoigu have a common interest in history. Shoigu became president of the Russian Geographical Society, which was founded in the Tsarist era, then revived and today is the club of the Russian elite. 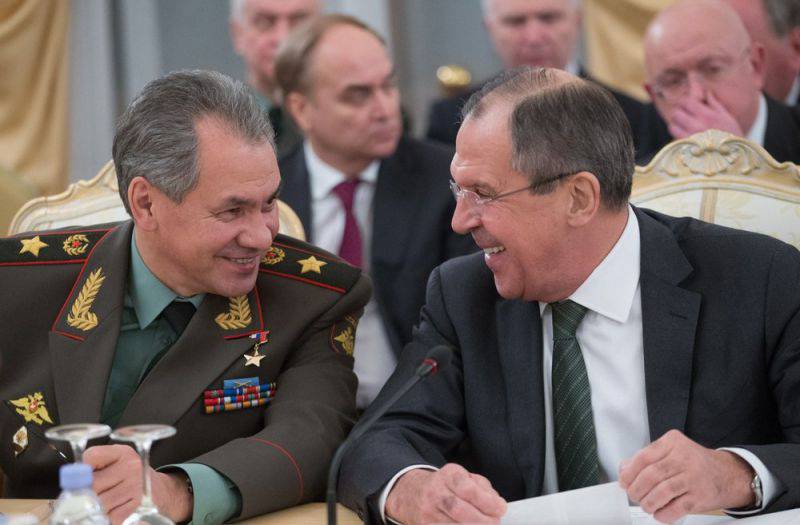 When the previous Minister of Defense Anatoly Serdyukov fell out of favor, Putin put the armed forces in the hands of Shoigu. Serdyukov began the urgently needed reforms in the army, but the generals turned against him. Shoigu basically kept the changes made, but at the same time restored morale. “Under Shoigu, the army began to believe in itself,” says Mikhail Khodaryonok, editor-in-chief of the defense newspaper Military Industrial Courier.

Shoigu focused his efforts on improving combat readiness, as well as on public relations. He began to conduct exercises and surprise checks more often, says Dmitry Gorenburg, an expert on the Russian army at Harvard University. His first decisions, such as an order to abandon the archaic soldiers' footwomen and go on socks, helped restore the reputation of the army, which was constantly ridiculed in the post-Soviet period.

At the beginning, his pragmatism also helped in establishing relations with the West. Shoigu warmly called by the name of the then US Defense Secretary Chuck Hagel. “If many of the leaders of the Russian security agencies tried to erect barriers by default, then he seemed to like to break through them,” said former Deputy Defense Minister Derek Chollet.

The Ukrainian crisis put an end to such familiarity. When Putin decided to seize the Crimea, Shoigu sent his deputy Oleg Belaventsev to lead the invasion. (Now Belaventsev is the presidential plenipotentiary in the Crimea.) Shoigu came in handy experience in crisis situations. “The Crimean operation showed the world a new Russian army,” says Minchenko. “And Shoigu became the symbol of this army.”

9, on the day of the 70 anniversary of the victory of the Soviet Union over Nazi Germany, Russian television cameras focused on a black open car, which Shoigu drove into Red Square. Dressed in uniform with all the military regalia, the minister crossed himself while driving through the Kremlin tower. Such an extremely unusual gesture apparently should have removed all questions about the religious affiliation of Shoigu, who is half Tuvinian, half Russian. Now, new questions and assumptions have appeared: will fate give him a higher post? 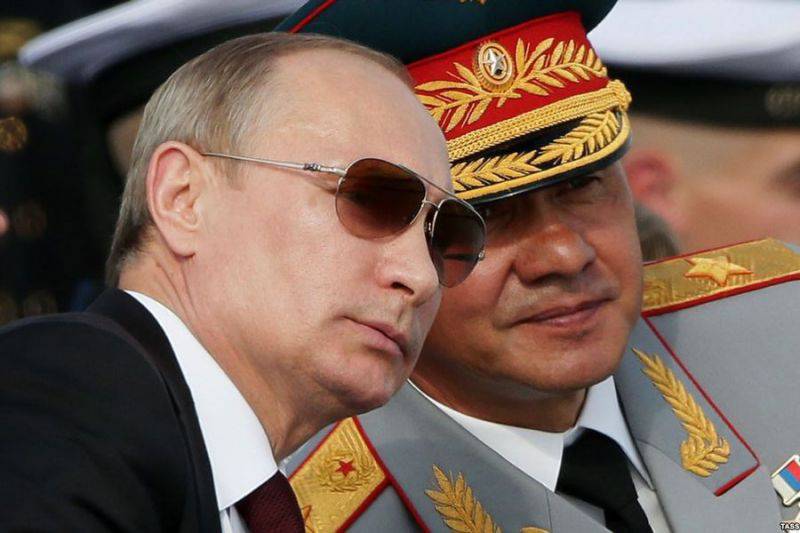 The Russian political system is relentlessly pursuing the question of what will happen after Putin. The strength of presidential power is partly based on the no-alternative idea. If a real second number appears, it will be “the beginning of a game that Putin fears because he cannot control it,” says Pavlovsky.

But if such a short-list exists, the name Shoigu certainly appears there. He remains the most trusted and most popular politician who is not appointed by Putin. He is not involved in scandals, and he has a relatively clean reputation. (Fighter against corruption Alexei Navalny accused Shoigu of building a tasteless pagoda-style house for 18 million dollars, but Shoigu’s representatives denied the accusations.) Shoigu has long denied that he has any political ambitions. But it can be good for him. "Obviously, he does not want to climb up the slippery pillar," said Mark Galeotti, a Russian researcher at New York University. “And that’s why he may end up at the top.” When an extreme emergency arises, Russia may well turn to its first main rescuer.

Ctrl Enter
Noticed oshЫbku Highlight text and press. Ctrl + Enter
We are
Or maybe just the way it should? A couple of words about the "Immortal shelf"The Economist: who will fight in the next war?
Military Reviewin Yandex News
Military Reviewin Google News
231 comment
Information
Dear reader, to leave comments on the publication, you must to register.