November 13 2015
7
Who are familiar with history aviation, he may be surprised at the title of this article. And he will be right. The Handley Page 0/100 is a fairly successful English aircraft during the First World War, but it was not a fighter, but a heavy bomber. However, the idea of ​​remaking the aircraft precisely into a fighter with a serious buildup of its machine-gun armament did exist and even was put into practice. And although the British decided not to use the aircraft in an unusual quality for a good life, but the use itself was episodic, still the Handley Page 0/100 can be called the heaviest fighter of the First World War.


As you know, at the dawn of the 20th century, most of the military, including the aviators themselves, saw in airplanes only a means of conducting reconnaissance. This, however, did not prevent enthusiasts from different countries, including in the UK, from generating new ideas in the field of military use of aircraft on the battlefield. Here, the voice of the commander of the first wing of the Royal Navy, Commander S. R. Samson, who two months after the outbreak of World War I ordered to hang bombs on two biplanes, hoping to crush the German zeppelins, was especially noticeable. During the attack, Lieutenant Mariks got two 9-kg bombs in one of the hangars, which kept the airships. And soon a devastating attack on the German airship base, located on Lake Constance, was dealt by the 4 of the Avro 504 aircraft.

Thus, the bomber functions of airplanes loomed quite clearly. As early as December 1914, the Admiralty issued a technical assignment for Handley Page to build a twin-engine patrol bomber. The company quickly created the Handley Page Type 0 aircraft, which was soon converted to 0 / 100 (the 100 number in the name meant the wingspan of the aircraft in feet). The prototype of this machine was the largest airplane built not only by Handley Page, but throughout the UK as a whole. In total, Handley Page released 46 / 0 bombers, which were renamed X. NUMX 100 in 1924. 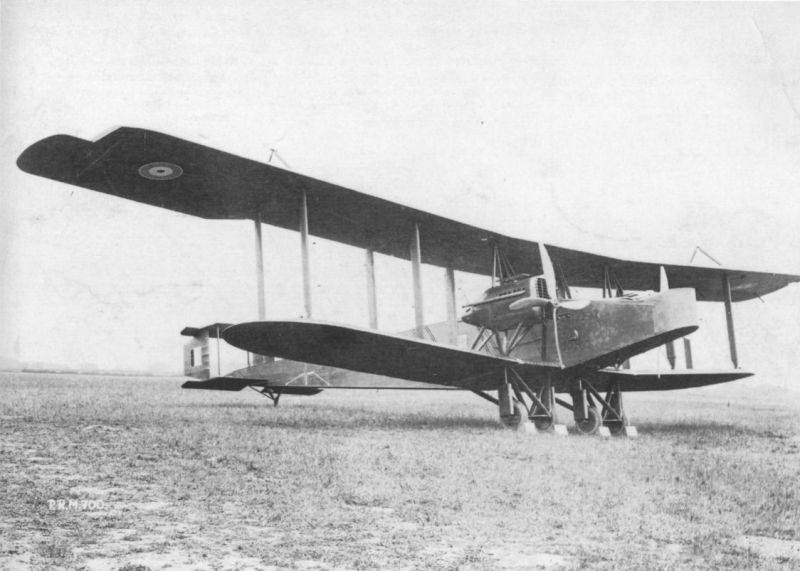 The aircraft was a biplane with folding wings of different span and a constant chord, with straight rear and leading edges. The wings of the aircraft were attached to the fuselage truss structure with transverse struts, which ended with the tail of the biplane. The cross section of the fuselage was square. The biplane chassis with a tail crutch possessed two wheels on each of the main racks. Two Rolls-Royce Eagle II engines were installed on the aircraft, developing 266 horsepower. each. They were installed in the gondolas between the wings in the immediate vicinity of the fuselage. Usually the crew of the aircraft consisted of four people: two pilots, a bow shooter-scorer and a rear shooter.

Designers of the Handley Page company paid great attention to the protection of the crew and aircraft power plants. So, the fully enclosed, glazed cockpit initially had an armored floor and a rear wall. Engine nacelles were also armored. For the beginning of XX century, this approach was innovative. However, during the tests conducted by the new aircraft, these measures of the designers were considered redundant. Therefore, the armor from the cockpit was removed, and the cabin itself was decided to open, sacrificing the comfort and safety of the crew, in order to improve visibility and reduce the weight of the aircraft. At the same time in the nose was located machine gun turret.

After the first flight of the aircraft, which took place on December 18 1915, it turned out that the flight characteristics of 0 / 100 did not meet the requirements. During the finalization of the aircraft, new radiators for water-cooling engines appeared on it, the booking was reduced, and the enclosed cockpit was dismantled. When the flight tests of the aircraft were resumed in the 1916 year, a significant improvement in the flight performance of the vehicle was noted, and in early May 1916, he was able to rise more than 2135 meters with the Handley 20 employees on board. In this case, testing and fine-tuning the aircraft lasted more than one and a half years. Their results were considered very successful. Especially the military was impressed by the combat load of the bomber - he could take on board up to eight 250-pounders (113 kg) bombs.

It is worth noting that one of the problems that hampered the process of building British heavy bombers in the 1915-1916 years was also the engines. At that time there was an acute shortage of aircraft engines with enough power. So the aircraft №3117 was involved for testing in Farnborough, where it installed engines of at least 4-s of various types, including the installation option 4-s French engines Hispano-Suiza, located in tandem installations. Finally, in September, 1917 launched new Eagle VIII hp 360 engines on the plane. The aircraft with these engines became the prototype of the bomber, which received the 0 / 400 index. This aircraft also increased the capacity of the fuel tanks and the mass of the combat load. All subsequent production aircraft were made according to this standard.

The creation of the first squadron on the Handley Page aircraft began in August 1916. The first aircraft in November 1916 of the year was able to get the third wing of the RNAS (Royal Naval Air Base), which was stationed in the north of France. This squadron spent the first officially registered bombardment on the night of 16 on 17 in March of 1917. The blow was struck at the French railway junction, which was in the hands of the Germans. In addition, heavy bombers were used to patrol the English Channel and the coast of Flanders, even their attacks on German ships were recorded. But over time, they began to attract more serious operations. Since the end of March 1917, British heavy bombers began to carry out group raids on German military factories, submarine bases and railway stations. A few planes even went to Greece and Palestine. On account of one of these aircraft was the bombing of the capital of Turkey - Constantinople.

The idea of ​​the non-standard use of heavy bombers arose for the first time after German pilots began bombing raids on England. The country's air defense command was so desperate that it was ready to seize on any straw, if only to find an opportunity to more effectively fight the German Goth bombers. As a result of 16 June 1917, the headquarters of RNAS in France received an official request from Vice-Admiral Reginald Bacon, commander of the Dover patrol, to use Handley Page bomber aircraft equipped with radio stations as a kind of AWACS aircraft. According to the military plan, the planes were always, when the weather seemed favorable for German air raids on the UK, to patrol along the Belgian coast of the North Sea occupied by German troops in order to locate German bombers in a timely manner. 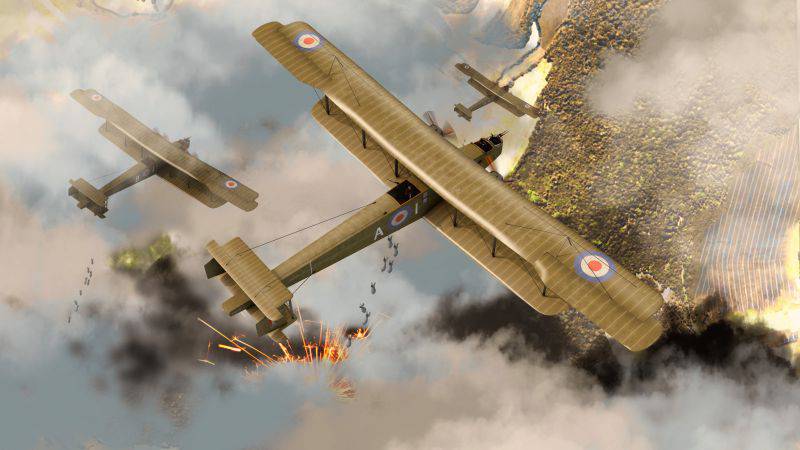 The very next day, Reginald Bacon’s proposal was officially rejected with reference to the complete unsuitability of heavy bombers for solving such problems for any lengthy period of time. And there were no arguments for this. Instead, there was another solution to the existing problem: to significantly increase the number of fighter aircraft in the RNAS in France, which should significantly reduce or completely prevent further raids of German pilots on the islands.

On this official correspondence, everything could stall if it were not for the initiative that came from below. A number of pilots who were based at Couderkerk (next to Dunkirk) believed that not only fighter aircraft should have taken part in the interception of German bombers who returned after the bombing of England. At the end of September 1917, they embodied their idea “in metal”. Their heavy bomber Handley Page 0 / 100 with serial number 3134 was modified to receive enhanced small arms. At that time, conventional bombers of this type made flights with a maximum of three machine guns (one was mounted on the turret in the nose of the aircraft, the second on the pivot on top of the fuselage just behind the wing box, and the third in the lower hatch installation). On a converted plane, the number of Lewis machine guns installed was brought to 5 units, four gunners operated on them. Unfortunately, due to the fact that the work was carried out in the order of private initiative of the pilots, no details about the layout of the weapons have been preserved.

On the night of September 30 1917, the German pilots carried out the sixth nightly raid on the cities of southern England. Because of the losses incurred during the previous sorties, the 3-I bomber squadron was able to send only 7 "Ready" to the sky, of which only the 4 bomber reached England. In addition to the Gotha medium-sized twin-engine bomber, three giant four-engined Zeppelin-Staaken bomber R.VI took part in the raid. It is worth noting that from June 1917 of the year to the summer of next year, these giants, together with the “Goths,” regularly raided London, Folkestone, Dover and other cities in the south-east of England. During these air raids of England, only one heavy Zeppelin-Staaken bomber R.VI was shot down. In February, 1918, the bomber dropped on London 1000-kilogram bomb, the heaviest aviation munitions, which was used during the First World War. 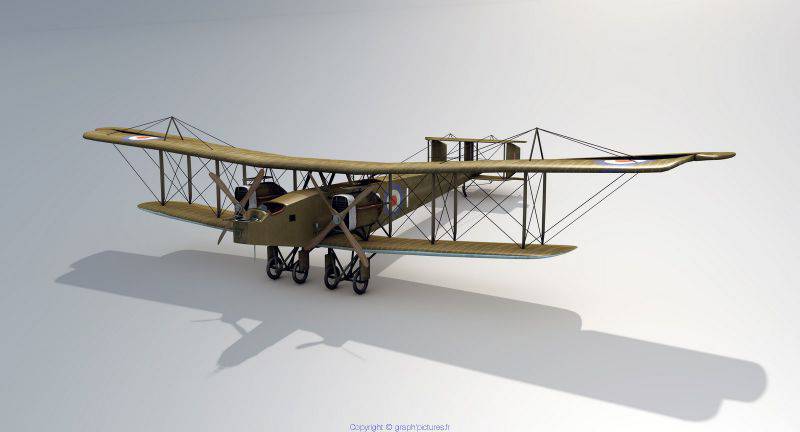 When the information about the raid of German bombers reached Dunkirk, several fighters were picked up to intercept the returning aircraft, as well as a Handley 0 / 100 equipped with five machine guns. The plane was piloted by Junior Officer Victor R. Gibbs, whose company consisted of four gunners: Chief Mechanic Langston, Private First Class Conley and two Private Second Class Kill and Spencer. During its four-hour patrol at an altitude of about 10 thousands of feet in 10 miles from Ostend, the crew was able to detect three German aircraft, attacking two of them.

The first of the detected bombers went quite low and immediately after the start of the attack on it “dived” into the fog, disappearing from the sight of the English crew. The British entered the battle with the second bomber "Gota" somewhere between Niuvport and Ostend. According to the report presented after the flight, the arrows opened fire on the German plane from two left-side and tail machine guns from a distance of approximately 50-100 yards, having managed to shoot the 3 disk at the enemy (according to other 5 information) before descending spiral, out of sight.

The English crew was absolutely sure that they managed to shoot down this plane, but it’s far from a fact that it really happened. During this raid, the Germans really lost one bomber, but there is every reason to believe that he was the victim of anti-aircraft artillery. The personnel of the searchlight station installed on the Dover breakwater on 21: 40 saw the burning plane fall into the sea approximately two miles from the coast. The object of the attack, "Handley-Page" consider another bomber "Gotha", which crashed near the Dutch Sas-Van-Ghent, not having reached the border just a few kilometers. 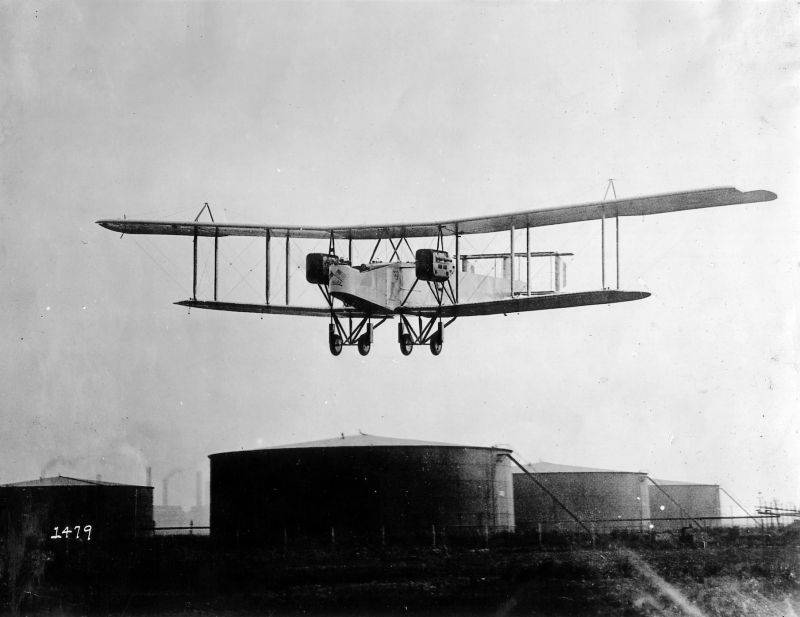 When the fuel began to come to an end, Gibbs decided to go to the city of Tura (today Torhout), where he also bombed the German airfield, dropping eight 65-pound bombs - less than half of the typical load, however, the flight time was doubled. Regardless of the accuracy of the application filed after the flight, it was the only case in World War I, when one heavy bomber fought with another in aerial combat and won. However, despite the generally successful experience of patrolling, he did not receive any continuation. The initiative was stabbed to the root. In response to the winning report, the high command demanded an ultimatum to finish off with amateur activities, reminding the officers that they were flying bomber aircraft. At that moment, there were fewer 20 machines of this type on the front, so the British command considered it to be a waste of a scarce resource to distract them from making bomber raids.