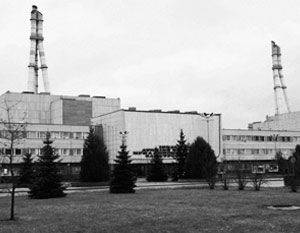 Appeal to Moscow, the demand of the Baltic States to compensate them for the years of "Soviet occupation" is so absurd that it condemned even the Prime Minister of Estonia, finding "counterintuitive." He can argue the logic here is: de-occupation (ie the output of the USSR), the Baltic states are much more expensive cost "occupation."


The joint claim of the Ministers of Justice of the three Baltic republics to Russia for compensation for the years of the “Soviet occupation” clearly demonstrates how far the heights of absurdity can be achieved by artificially adjusting the political situation for the sake of the political situation. stories. Literally, in accordance with the anecdote: "Eastern barbarians rolled back, leaving behind power stations, hospitals, schools, campuses."

“Losses during the post-Soviet transformation of the beginning of 90's are characterized by the following figures: 35% of the economic downturn in Estonia, 49% in Lithuania and 52% in Latvia”

The reaction of Russian politicians who promised in return “from a dead donkey’s ears” is natural in this sense. But the lack of response from historians is alarming. After all, our Baltic “partners”, with their persistent demands, apparently not fully aware of the consequences of their actions, raise such historical questions that require reflection in the Baltic countries and in modern Russia.
Between Baltic and the Council

The modern official historiography of Estonia, Latvia and Lithuania regards the entry of these states into the USSR in 1940 as an occupation. At the same time, the fact that the Estonian, Latvian and Lithuanian Soviet Socialist Republics were proclaimed by the elected parliaments of these countries, and they also asked to join the USSR, is noted in principle. First, because the elections in all three states were held in the presence of Soviet military bases on their territories. Secondly, because the pro-communist blocs won the election. From where, they say, are there so many communists in the prosperous European Baltic, where did they get such support? It is clear that the elections were rigged by Moscow - this is the official point of view of the modern Baltic ruling elite.

But remember the story. The slogan “Power to the Soviets!” Was publicly voiced in the Baltic even earlier than in Petrograd.

The territory of present-day Estonia roughly corresponded Revel or Estonian province of the Russian Empire (the southern part of Estonia and northern Latvia were part of the Livonia province). Soviets of workers, landless and army deputies appeared here with the February Revolution. By the autumn of the year 1917 provincial Soviets had developed a structure serious organizational capacity and played a significant role in political life.

The requirement for the transfer of power to the Soviets was publicly announced here in September 1917 years Revel Council, the Latvian and 2-th Congress of Soviets of Estonia.
On October 22 (November 4 on a new style), a military revolutionary committee was created under the Executive Committee of the Council of Estonia - a body to lead an armed uprising. October 23 (November 5), earlier than in Petrograd, he took control of all strategic points, which ensured a quick and bloodless change of power.

The following figures attest to the popularity of local Bolsheviks: in the autumn of 1917, the RSDLP (B) was the largest party in Estonia, with more than 10 thousands of members. Elections to the Constituent Assembly in Estonia gave the Bolsheviks 40,4 a percentage of votes against 22,5 cast for national parties - the Estonian Democratic Party and the Estonian Landowners Union.

The Executive Committee of the Workers ', Soldiers' and Landless Deputies of Latvia Council (Iskolat) took power into their hands on November 8 – 9 in a new style. The alignment of forces in the region is evidenced by the results of the elections to the Constituent Assembly in the region of Vidzeme. The Bolsheviks received 72% votes on them, others, including the national parties - 22,9%.

It should be noted that part of Latvia was occupied by Germany at that time. Lithuania, or rather the Vilna province, a part of whose territory today is part of Belarus, part of it is part of Lithuania, was completely occupied by Germany. Revolutionary events unfolded here later, in the 1918 year, but were suppressed by German and Polish troops. But there is no reason to believe that public sentiment in the occupied territories was fundamentally different. It must be admitted: Estonian, Lithuanian and Latvian Bolsheviks were numerous and had very substantial support in the regions.

And closing the question of where in the Baltic countries have many supporters of socialism, we note that it was precisely the Estonian, Lithuanian and Latvian Bolsheviks, not some emissaries from Petrograd.

Where did they go after? In February 1918, after the failure of another round of talks of the Brest peace, the German troops launched an offensive on the Eastern Front. By 22 February they occupied the territory of Livonia and Courland provinces. Tips were destroyed. In March-April 1918 years in these areas were created the Duchy of Courland and Livonia. They were subsequently joined by Germany in the Baltic Duchy. July 11 1918 year announced the establishment of the Kingdom of Lithuania, the throne of which was erected the German Prince Wilhelm von Urach.

Later, in November 1918, in connection with the defeat of Germany in World War I, it signed an armistice of Compiegne, which, among other things, provide for preservation in the Baltic German occupation forces to prevent the restoration of Soviet power here. This reduction was made possible only 1940 year.

“Continuous Continuity” of the Baltic Democracies 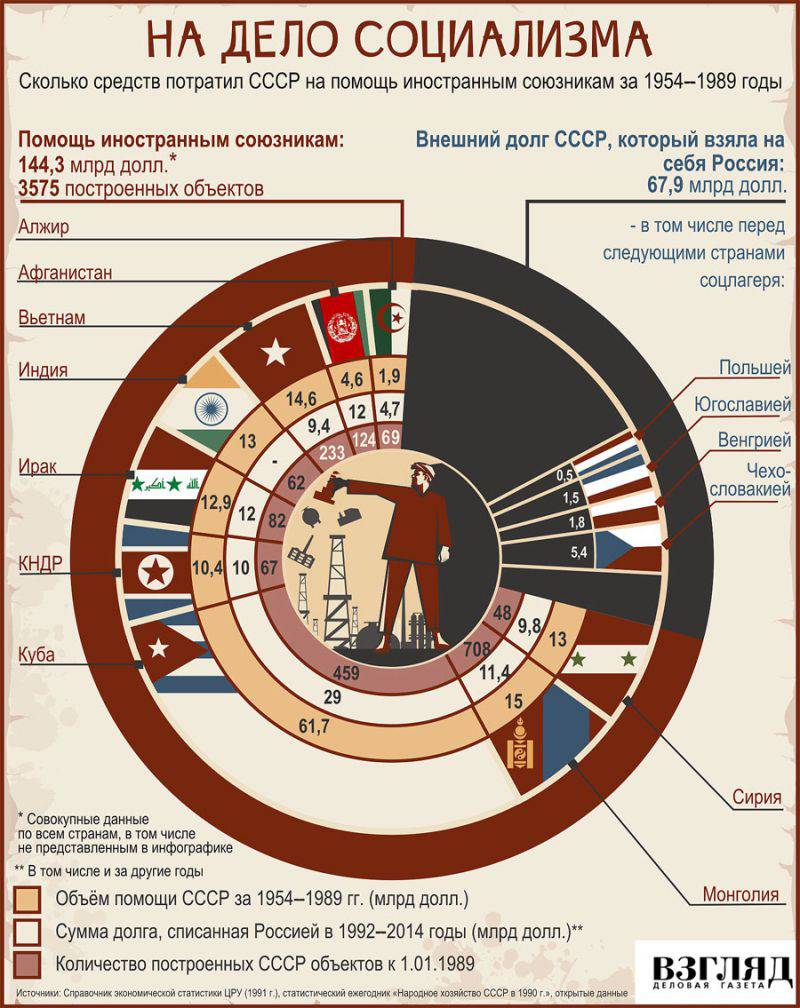 How much money the USSR spent on helping other countries
In modern Baltic historiography, it is generally accepted that “election campaigns in the republics organized according to the“ Moscow scenario ”violated the democratic guarantees of the constitutions of sovereign Baltic states, that the elections were not free, undemocratic” (quoted by historian Mikelis Rutkovsky).
The head of the Estonian Ministry of Justice, Urmas Reinsalu, commenting on the recent joint declaration of the ministers of the three countries on compensation from Russia, said: "The continuous succession of the Baltic States allows such a claim to be made." This question should also be studied - to whom does the modern Baltic democracies erect "continuous continuity"?

In Estonia, the nationalist dictatorship of Konstantin Päts was established in 30, parties were banned, the parliament was not going to, political opponents were persecuted by the police, and “camps for parasites” were created. In Latvia, the fascist dictatorship of Karlis Ulmanis was established in 30. Political parties were banned, newspapers were closed, the parliament was dissolved, the communists, of those who did not go to the illegal situation, were arrested. Since 1926, the dictatorship of Antanas Smetona has been established in Lithuania. The leaders of the Communist Party were shot, the socialists were persecuted and went into hiding.

Dictatorships in the Baltic countries existed right up to 1940, when, at the ultimatum of the USSR, the persecution of political parties was stopped, elections were allowed, which were won by pro-Soviet pro-communist forces.

The question of the "continuous continuity" of the modern authorities of the Baltic states, thus, can hardly be considered completely closed. As the question of "Soviet occupation", given that the Soviet republics arose here still the first.

Socio-economic situation in the Baltic States during the interwar period

What are the successes of socio-economic development could boast of independence of the Baltic states in the inter-war (between the First and Second World Wars) period? Here are a few facts:
By 1938, the factory industry in Latvia was 56% of the level of 1913 years. The number of workers has fallen by more than twice the pre-war level.

Amid deindustrialization, the share of the population engaged in agriculture was practically not reduced - contrary to European trends. In 1922, in Estonia, the rural population accounted for 71,6%, in 1940, 66,2%. Similar dynamics are characteristic for Lithuania. In the countries there was an "agrarization" of the economy and the archaization of life.

Against this background, he started a real exodus of residents abroad seeking a better life, earnings, not finding the use of their forces in the economy of the Baltic countries. With years of 1919 1940-th only from Lithuania emigrated to the United States, Brazil, Argentina about 100 thousand. Surprisingly recalls the days of the new independence, is not it?

After the war, the Estonian USSR was in first or one of the first places in the USSR in terms of the volume of investment in fixed assets per capita. High-tech industries such as the electrical and radio engineering industry, instrument engineering, and ship repair were actively developing in the republic. The chemical industry from its own raw materials (oil shale, supplied by the mining industry of the republic) produced a wide range of goods, from mineral fertilizers to antiseptics and detergents. On the territory of the republic were built the world's largest oil shale Baltic and Estonian TPP, fully meeting the needs of the republic.

The Latvian SSR has become an industrially developed region, occupied one of the leading places among the republics of the USSR in the production of national income per capita. Here is a small list of goods, the production of which was established in the republic and which were supplied both to the regions of the Union and for export: passenger cars, trams, diesel engines and diesel generators, automatic telephone exchanges and telephone sets, refrigerators, radios, washing machines, mopeds - and etc.

Lithuanian SSR in 1990 year for per capita GDP ranked 39-th place in the world. In the republic acted instrument-making, machine tool manufacturing, electrical and radio centers, the production of electronics. Developed shipbuilding, machine building, chemical industry. Electric power of the Lithuanian SSR, in addition to thermal stations providing the Ignalina nuclear station, which was stopped in 2009 year at the request of the EU.
The population of the Lithuanian SSR was 3689 thousand people. Modern Lithuanian Republic - 2898 thousand people.

Since independence, the share of industry in the Baltic countries has decreased from 23 – 26 (according to various estimates) per cent of GDP in the 1995 year to 14 – 20 per cent in 2008. The share of transport and communication is from 11 – 15% in 1995 to 10 – 13% in 2008, and even the share of agriculture and fishing from 6 – 11% in 1995-m to 3-4% in 2008-m . And this is taking into account that 1995 year in itself is remarkable only by the fact that by this year radical transformations (“de-Sovietization”) were basically completed, privatization was carried out and the states submitted applications for joining the European Union.

Losses during the beginning of the post-Soviet transformation 90-X experts characterize such figures: 35% economic decline in Estonia, 49% in Lithuania and 52% in Latvia.

Against this background, unwittingly begin to look for additional sources of income. Albeit in the form of compensation.

Ctrl Enter
Noticed oshЫbku Highlight text and press. Ctrl + Enter
We are
The mythical "aggression" in the Baltic states and Moldova, which was notLosses of the USSR and Germany in the Second World War
Military Reviewin Yandex News
Military Reviewin Google News
32 comments
Information
Dear reader, to leave comments on the publication, you must sign in.