Dmitry Steshin: “The war in Syria is not as terrible as in the Donbass” 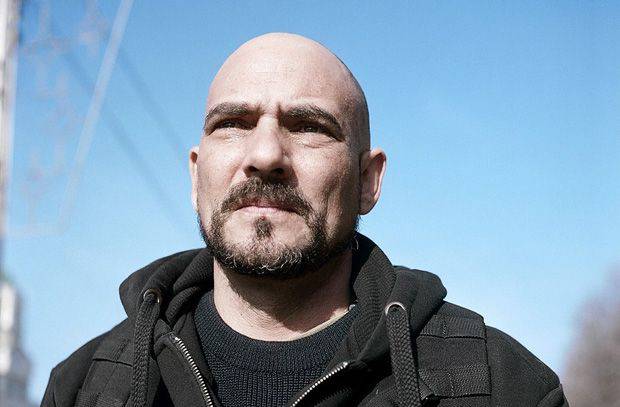 War correspondent - about the features of the Syrian battles and about the unknown peaceful life
Dmitry Steshin and Alexander Kots, special correspondents of the CP are real heroes of the information war. They covered many military conflicts around the world, spent months in the Donbass, and now they write vivid reports from Syria, where the Russian air operation against the IS is under way. During the holidays, Dmitry Steshin found time to answer the questions of the “Russian Planet”. Voenkor compared the war in Syria and in the Donbass, spoke about what remains behind the scenes, and explained why Russian journalists in Syria work easier than Western.

- Are you in Moscow now. What is the reason for the break in work: some calm, no progress on the front? What is happening in Syria right now?

- A month and a half of a business trip in the combat zone is the limit, you need to recall a person or change. In Syria, protracted battles began, literally for every house or for every meter of the road. For the general reader, this is not so interesting, but we focus on it. I think no one planned in Syria initially breakthroughs hundreds of kilometers inland, huge boilers. With Russian help, they were laid for war to exhaust the enemy. Modern warfare is a war of resources, whoever has more of them has won. Judging by the fact that in the hottest sectors of the front, where we worked - Salma, Idlib, Kharasta, the Jobar region, the “otvetka” practically did not arrive, as it would in the Donbass, the enemy is afraid to identify himself once again. And with ammunition he is very bad. This is the main result of the Russian aviation help. Because a couple of months ago, everything was exactly the opposite.

- You have spent a lot of time in Donetsk. How different are the wars in Syria and Donbas, especially in terms of emotional perception? And what is common?

- “Syrianism” is strongly developed in Syria, this is a term from the Donbass, a lot is invested in it. Defense instability and lethargy in the offensive. The ostentatious disregard for death, turning into senseless losses. Aversion to fortification works, which also has a bad effect on reindeer herds. In general, the war in Syria, as it seemed to us, is not so terrible and cruel. This opinion was first expressed by Semen Pegov (LifeNews war correspondent. - RP). We were still in Moscow, he came to Syria before us. Virtually no counterbattery from the enemy. Syrian artillery hits from one position for a week. In the New Russia is simply impossible to imagine. Part of the war in Syria is in the mountains, at altitudes up to a thousand meters. In addition to the wild and humid climate, the configuration of the front in the mountain war is striking, when there are areas on the road deep in the rear, which the enemy has shot through with 500 meters. Attacks are carried out by assault groups of volunteers, very few. For the entire unit to withdraw and go into a breakthrough, there is no such thing, therefore, very modest results. The equipment of the Syrian fighters is very modest, well, very modest. Personally, I did not see anyone in body armor. Kevlar helmets are rare. Picatinny plate, Weaver bar, collimator sight, grenade launcher, ergonomic handles or butts, G-shock watch, GPS or tablets with maps, unloading or backpacks with MOLLE, berets from world leading manufacturers - none of this is found in the Syrian army or is extremely rare, at the level of statistical error. Or at special forces. But the Syrian army does not fight without gas burners and equipment for making mate. The soldiers are fed in positions by Arabian fast food, which is brought in foil boxes. The quality of this fast food - not every Moscow restaurant will cook this. Otherwise, it seemed to me that the fighters were motivated, after the intervention of Russia, they recovered their spirit and are determined to win. Because there is nowhere to retreat, but there is no bad living under the IG. And the IG in its own madness every day proves it with its videos. 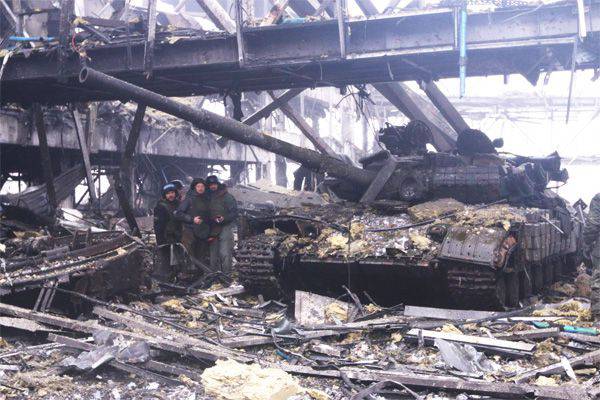 Donetsk airport. Photo: Dmitry Steshin / Facebook.com
- If hostilities resume in the Donbas, will you return there or will you prefer to work in Syria? Do you think that there is a political agreement on the exchange of Syria to the Donbass?

- Of course, I will return to Donbass. I don’t believe in such exchanges that the "guard patriots" on the plush sofas "saw". Most likely, this is the case: the information focus has shifted from Ukraine to the Middle East, and this is very worrying for the Kiev authorities. I think they understand that as soon as the Syrian crisis is resolved positively, in the Donbass, and throughout the rest of Ukraine, they will begin to straighten the humpbacked people in the opposite direction. And no American 6th fleet will drop landing in Odessa and will not block the entrance to the Black Sea to our North the fleet, eg. Because the Mediterranean Sea is now our inland sea. We have a huge navy base and air base in Latakia on this sea. Such a configuration.

- Are we winning the information war against Western propaganda?

- Judging by the fact that the world's leading agencies bought the filming of two modest Russian journalists Kots and Steshin, they did not have any other sources. The Ministry of Propaganda very tough filters journalists working in the country, and rightly so. Because the example of Graham Phillips (a British journalist who refused to cooperate with leading British media because of differences in the assessment of events in Ukraine. - RP) clearly shows how the Western media work. And you should not think that if you launch a hundred scum with video cameras and one honest journalist into a warring country, the world will immediately believe the latter, the bureaucrats will open their eyes in supranational structures, crack governments, etc. Pigs in the Western media are at the trough so tightly that no foreign snout no longer fit. An honest journalist will simply be disconnected from the air. This is done by clapping one palm. Therefore, the Syrian authorities simply blocked the information tap. Westerners in Syria worked, but were very constrained in their actions. Russian journalists were somewhat easier. But, for example, in Maalyulya, where Sasha and I went without a special attendant, we would not have been allowed. We were watered with coffee, sincerely thanked for the support, but passed through a roadblock only after a series of telephone calls. They vouched for us.

- How in Syria as a whole relate to Russia? Is it connected solely with Russian support or not?

- In Syria, they always treated Russia very well. There are three countries where I feel absolutely comfortable, at home: Serbia, Syria and Mongolia. But Russia's help turned off all the "brakes". We were thanked on the streets, watered with tea, admitted that they were reading our Facebook accounts, sent a bottle of Arak to the restaurant with a note in Russian, “We will not forget your help,” the chef gave us a red star from pita bread. We passed the roadblocks with a whistle, along the “military lane”. They opened a bank for us so that we could pay for the extension of visas. Just do not list, and it is very nice.

- Are you interested in antiques? I liked it very much история about the icon of Our Lady of Tikhvin, which you found at an antique dealer in Syria and returned to your homeland. What historical, cultural, ethnographic evidence of the connection between Russia and Syria did you find or notice?

- The Syro-Yakovite church has long-standing ties with the Russian Orthodox Church, still pre-revolutionary. There has always been a powerful stream of pilgrims. And after any anthropology there are always artifacts. And memory. We accidentally came to the baptism of two twin girls. Their father met us and said literally: “I specifically called my daughters by names adopted in Russia - Anna and Maria. And the fact that Russian journalists came to their baptism, in general, is a sign for me! ”In most of the holy places where we were, in the temples there are icons of traditional Russian writing. In the cell of Saint Thekla the Vladimir Mother of God hangs right at the entrance.

- What remains behind the scenes, what part of the Syrian life can you tell about, which leaves the media attention? There is a peaceful life in the Syrian cities. What is she like?

- I would really like to tell and write something about the Alawites, but I do not know who they are, what they believe in, although I tried to honestly understand from the sources available to me. Peaceful life in Syrian cities is crowded and vain. And waves of aromas of different quality and origin. Walking down the street, you consistently get into the smell of the inside of a ram, slaughtered a long time ago, then some heavy and bright oriental perfume poured over you, followed by a curtain of freshly ground cardamom, the smell of shavarma again and the remains of a slaughtered ram and a bit of sewage . Syrian city life is very secular. You can smoke everywhere. A bunch of shops with alcohol. There is a whole quarter with cinemas where some light eroticism is played. And next to it is a large mosque, and all this is divorced in time and space and does not intersect and does not dominate one over the other. And does not compete with each other. For me, this is a great mystery - how is that? 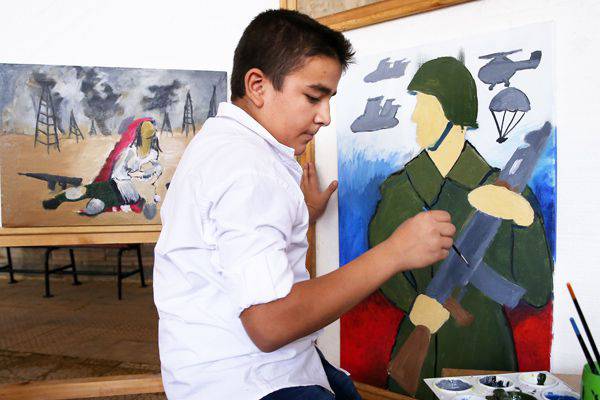 Drawing lesson in the Syrian school for orphans from families of officers of the Syrian army who died during the hostilities. Photo: Valery Sharifulin / TASS
- The catastrophe of the Russian Airbus A321 over Sinai is a terrorist act, what do you think? What consequences to wait if this version is confirmed?

- Yes, I have no doubt that this is a terrorist act, a big and very bloody hint of Russia. An attempt to worsen our relations with Egypt, with which we again began a “honeymoon” in relations. The only positive thing in this tragedy, forgive me for the cynicism, is the removal of our insane and tired citizens from the combat zone, which is considered tourist by misunderstanding and deceit. Russia absolutely does not need to keep 80 thousands of potential hostages in a country where Islamic extremists have been in power for several years. And after the coup, they have not gone away - there are millions of them in Egypt.

“The war in Syria is only part of world war.” What's next? Where else will flare up?

- I want one thing: no matter where it flashes in the Middle East, but in Syria to go out. So that it becomes an island of security, and Latakia turned into our tourist paradise, where even at the end of October + 35.

Ctrl Enter
Noticed oshЫbku Highlight text and press. Ctrl + Enter
We are
A great interview with Sergey Lavrov: about Ukraine, Obama and IranWhat you didn't want to know about England
Military Reviewin Yandex News
Military Reviewin Google News
104 comments
Information
Dear reader, to leave comments on the publication, you must to register.