November 15 2015
192
To the only production plant in Ukraine tanks close attention was always riveted. Over the years of independence, the enterprise had ups, downs and even a crisis, when the management planned to divide it into separate legal entities. Recently, the Malyshev plant celebrated its 120th anniversary. About what are the plans of the enterprise, told "SQ" at the factory. 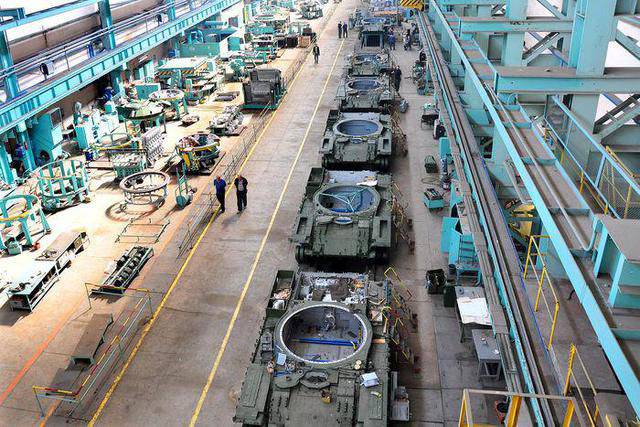 “The company has orders for 5 years ahead. First of all, we are talking about the tank "Oplot". The Ministry of Defense actively supports the production of this combat vehicle. The following year, it was decided to arm the Ukrainian army with dozens of such tanks.

"Oplot" is being tested in Pakistan, where it is tested for accuracy, quality of fire and performance in the desert. I would note that Oplot is capable of working at any thermal mode possible within our planet, therefore it shows excellent results in comparison with the Chinese colleague. Our chances are increasing, and we hope to conclude a contract with the Pakistani Armed Forces for the supply of 300 tanks, which will provide the factory with work.

Let me remind you that under a contract with Thailand 10 tanks "Oplot" were delivered to this country. By the end of the year we will ship 5 more, and in total we have to supply 39 machines.

We are working on a contract with Ethiopia, which is interested in the products of the plant.

- The plant is also engaged in the manufacture of engine compartments (MTO) for armored vehicles. Now we produce 7 kits monthly, but we plan to increase production to 10 MTO per month in the near future. MTO orders will give the load to both the aggregate and the main plant, creating a “break-even point”.

The unique engines for MTO are made only by the Aggregate Plant named after Malyshev. Their advantage is that they can run on any fuel and can withstand any thermal stress. Even the Chinese were not able to reproduce the "Malyshev" engine and MTO as a whole. Therefore, this direction has very big prospects.

Another direction - the production of lightly armored vehicles. Agreements between Morozov’s Kharkiv Design Bureau for Mechanical Engineering and the Ministry of Defense of Ukraine for the supply of components for the BTR-3, BTR-4, BTR-4Е and the Dozor machine are being prepared for conclusion.

One contract is already being implemented and the next one for the restoration and repair of military special equipment Bulat for the needs of our army in the ATO zone is being prepared for conclusion.

- The plant has quite large-scale plans for the Oplot tank. What makes it so good that it is popular in the market, where a dozen global corporations work?

- T-84U tank "Oplot" is the pride of the plant, its business card of recent years, one of the best tanks in the world today. Its tactical and technical characteristics are comparable with Western models, and even surpass them in some parameters: in driving performance, protection, and fire control system. In the "Oplot" implemented all modern requirements for armored vehicles. At the same time, the car is almost twice cheaper than its foreign competitors, which means that for this reason it is interesting for potential buyers.

- Does the plant have civil orders?

- The company manufactures engines and spare parts for diesel locomotives, mainly for neighboring countries and Ukraine. Old Soviet and post-Soviet diesel locomotives are gradually being replaced by more modern counterparts, but even with this in mind, the plant has been working in this direction for at least five to seven years to come. Civil orders may be in other areas, but the defense theme will remain a priority for the plant.

- Since Soviet times, the plant has got bulky infrastructure and high overhead costs, which reduce the profitability of production. Did you solve this problem?

And about. General Director of the State Enterprise "Plant named after Malyshev" Alexander Khlan:

- The plant near 20 has long-term contracts and in the near future there will be even more. They will allow the enterprise to work with profit. The organization of labor continues to be improved, which will make it possible to switch to full self-sufficiency. Of great importance is the support of "Ukroboronprom". We firmly know that after shipment of products we will receive payment, which means we will pay wages and make other necessary payments. The stability of the payment of completed orders this year allowed to restore equipment, improve working conditions in the shops and regularly pay salaries.

The plant has practically no wage arrears, a part of the debt of previous years is paid off monthly. Experts in their field can earn from 8 000 UAH. and above, the average salary at the enterprise is 4600 UAH.

- What machines are you planning to restore in the near future?

- In the service of the chief engineer of the plant, we developed a schedule for the restoration and technical re-equipment of the enterprise. First of all, it is the repair of heavy equipment, special CNC machines. This year, the steel mill No. XXUMX was put into operation after almost two years of inactivity; test melts were made in the iron workshop No. XXUMX.

Complete the upgrade is expected for 2016 year. First, within three months, we will repair the existing machines, and then we will start purchasing new ones. The new equipment will work through 6-9 months after the purchase (this is the exact time when the machine was made to order). So next year can be called the year of renewal and modernization of the entire technical park of the plant.

The plans include the development of social programs and the improvement of working conditions in workshops. Scheduled phased start heating in a number of rooms.

- The factory announced recruitment. How many workers are you planning to hire?

- The plant has the opportunity to invite 1 - 1,5 thousand people to work. Work so much that is enough for everyone. The company is interested in experienced skilled workers. But even if there is no experience, a person will be trained in a profession for two months. The plant invites the operators of CNC machines, programmers, engineers. Employed daily by 10 people and more. But the stock of vacancies is still great.

Today, the company rests on the people of the older generation, who gave him more than a dozen years of their lives. They want and can pass on their experience to the young.

As a large state-owned enterprise, the plant provides significant social benefits that are also interesting for young people. It is planned to repair the old and build new housing, two houses have already been built, and one entrance to the settlement from the developer has been allocated. For the purchase of housing issue a loan that must be paid for 25 years. I note that now there are few enterprises in Ukraine with such opportunities.

Ctrl Enter
Noticed a mistake Highlight text and press. Ctrl + Enter
We are
New plants and workshops in Russia in 2014 yearList of destroyed the largest and most high-tech enterprises
192 comments
Information
Dear reader, to leave comments on the publication, you must to register.