Arrival of the train 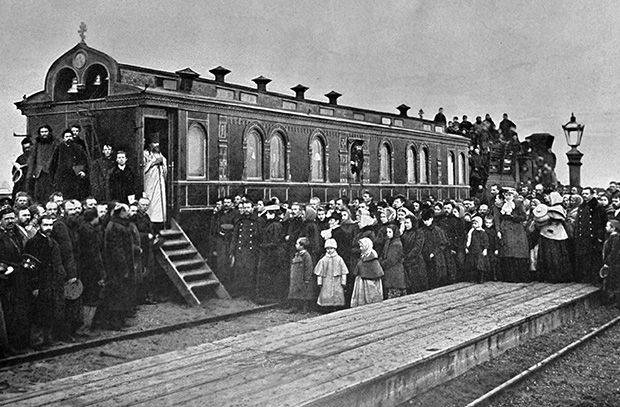 Construction of the first railways in Russia was late compared to Europe, but then took revenge

At the beginning of the 19th century, the government of the empire became more acutely aware of the transportation problem: the vast territory was connected only by a network of roads, most of which were in a deplorable state, which made it difficult not only to govern Russia, but also its commercial and industrial development. In 1809, Alexander I issued a manifesto that said: "The spread of agriculture and industry, the growing population of the capital, and the movement of domestic and foreign trade already exceed the measure of the former means of communication." The country needed more high-speed means of transport and roads for it. However, seriously engaged in the construction of a new kind of roads only after decades.

The first locomotive in Russia and the first railway were built in 1834, Efim and Miron Cherepanov. but история It does not consider this event a “birthday” of railway transport: the fact is that the road was used to transport copper ore from the mine to the factory and, thus, was not an expensive public use. The transport created by Cherepanov did not become widespread due to the short-sightedness of the administration and some random circumstances. For example, the road ran far from any sources of coal, and using firewood for heating was too expensive. Therefore, the road soon turned out to be abandoned and did not become an example for the owners of other factories.

Road for the most respectable public

But in the same year 1834, when the Cherepanovs made their way, the Mining Department of Russia invited to work the professor at the Vienna Polytechnic Institute, Franz Anton von Gerstner, who had previously become famous for building the first public railway in Austria. After examining the infrastructure of the Ural factories, Gerstner gave Emperor Nicholas I a report on the need for laying railways in Russia. The Austrian considered it necessary to build new means of communication not only in the Urals, but also in the central part of the country: for example, he insisted that the line be built between St. Petersburg and Moscow.

Having listened to a specialist, Nikolai submitted his project to the commission for consideration, headed by Mikhail Speransky. Having considered the proposal, the commission decided to start small, having given Gerstner the privilege to build a road that would connect St. Petersburg, Tsarskoye Selo and Pavlovsk. The commission considered the road as a trial balloon, noting that it would be possible to start building other highways "not before, as at the end of the road ... and according to the experience of using such roads for the state, the public and shareholders." However, in society, the project immediately aroused interest: three million rubles for the construction was collected by subscription in just six months. It is curious that Gerstner tried to technologically improve the project, replacing the track gauge (1,435 m) widespread in Europe by the so-called six-foot 1,829 m. This would make it possible to make wider and more stable compositions. 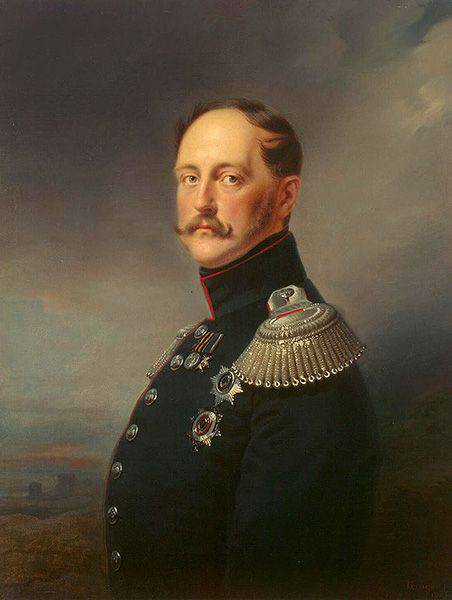 Portrait of Nicholas I. Artist E. Vernet
In May, the construction of the embankment began on 1836. This was done by private contractors, each of whom received his “zone of responsibility” - a small section of the route. The total number of employed workers was slightly less than 2 thousand people. In the summer, the government decided to accelerate the construction of the road, sending soldiers from the Krasnoselsky camps to help 1400 workers. Supervised the work of 17 engineers, five of whom have already gained experience in building railroads in the UK.

Rails, turnouts and fixtures were purchased abroad, in England and Belgium. There were also ordered locomotives, they needed to be made in view of the increased gauge. Gerstner formulated the requirements for specifications in this way: locomotives must have horsepower 40 and be able to carry several cars with 300 passengers at a speed of at least 40 versts per hour. Gerstner kept in mind the commercial side of the enterprise: in order to provide the railroad with a vast clientele, he planned to turn Pavlovsky railway station into a kind of entertainment center, ordering fountains and a kind of “big musical instrument” for him.

However, the engineer failed to meet the deadlines: it was autumn, it started to rain. Gerstner understood that delaying the deadlines could put an end to the project, and decided to open traffic on a small - three and a half versts - section of the road between Tsarskoye Selo and Pavlovsk. This would serve as a kind of PR action. True, there was another misfortune: locomotives from Europe have not yet delivered, and instead had to use horses. Let's wait for September, a curious public gathered in Pavlovsk Park.

The wife of the famous historian Elena Karamzina described the event in the following way: “On Sunday, everyone — from the yard to the last commoner — went to watch a sample of steam carriages on the road to Pavlovsk. All four wagons, divided into two trains, drove up, each with one closed and one open, forming one whole; there was no pair, each train was dragged by two horses pulled one after the other by a goose, about a hundred people were placed in each train, the horses were galloping. This sample was arranged in order to show the convenience and ease of such a method of movement; they say that by the middle of October, everything will be ready and the carriages will already be walking the ferry, it is very interesting. ” In the carts allowed everyone. Yes, we did not make a reservation: they were not cars, but different types of carts that had several names depending on the design - “sharabans”, “Berlin”, “stagecoats” ... The horse train set off on the sound of the bell. The PR campaign was a success - the train overcame the 3,5 versts in 15 minutes.

In early November, the first steam locomotive was delivered, and 6, after the prayer service timed to coincide with the launch, he took the train. Passengers who had already heard about the journey of the horse train, packed in carts. The machinist did not accelerate the locomotive to the 40 lay, as the onlookers stood all along the way and it was impossible to keep them from walking along the cross ties. Newspapers described test trials in ecstatic words: “We cannot depict how majestically this formidable giant, puff of flames, smoke and boiling splashes, moved forward ... The spectators stood on both sides of the road, seeing the majestic, even, light, and fast car movement ... ”The emperor and his family attended the tests. 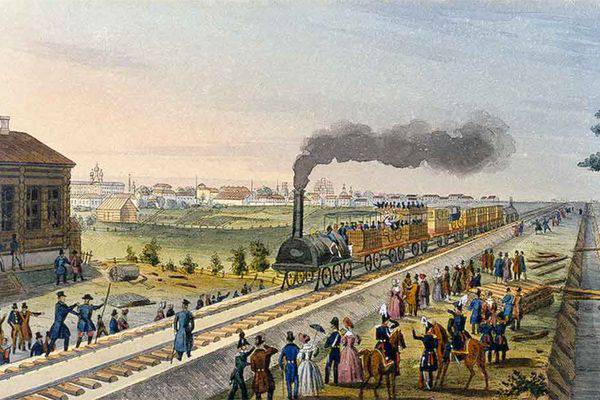 Tsarskoye Selo railway. Painted lithography. Photo: Wikipedia.org
The construction of the road was completed in the autumn of the following year, and its grand opening took place on October 30. By this time, Russia managed to purchase 6 locomotives, 44 passenger and 19 freight cars. The opening was attended by all the ministers and major diplomats. The further fate of the railway business in the empire depended on the success of the enterprise, and Gerstner simply could not entrust the management of the locomotive to anyone but himself. The first train went from Petersburg to Tsarskoye Selo in 12 hours 30 minutes. The locomotive, bearing the name “Agile”, walked slowly through the city so as not to crush any Petersburgers. And only after the train reached the Bypass channel, it began to pick up speed. Having spent a little more than half an hour (35 minutes) the whole way, to the roar of applause, "Agile" arrived at the platform of Tsarskoe Selo station. His appearance was marked by a solemn banquet. On the way back, Gerstner decided to “polish” - he reduced the time to the station to 27 minutes.

The opening of the message on the Tsarskoye Selo railway instantly made a new type of transport extremely popular. On the stage of the Alexandrinsky Theater, they even set up a vaudeville “Trip to Tsarskoye Selo”. After 5 years, 1 February 1842, Nicholas I gave the nod to lay the highway between St. Petersburg and Moscow. This time they entrusted the work to the Russian engineers Pavel Melnikov and Nikolai Kraft, the authors of the project for this road. The northern part was built by Melnikov, the southern part by Kraft, and 27 young railway engineers helped them. Work began on August 1 of the same year.

Never before have railways ever been built in such difficult conditions: the challenge was not only a cold climate, but also swampy soils. The road from Tsarskoye Selo differed by a much higher level of detail processing: for example, the embankment was built immediately under two paths, the rails were not cast-iron, but steel and, moreover, wide-basement, and the track was pressed down to five-foot (1,524) width, which will later become standard for all roads of Russia. As historians then calculated, the total amount of processed soil was 46 million cubic meters. Since the path between the capitals crossed many rivers and rivers, engineers had to build 8 large and 182 medium and small bridge. 34 stations were built on the road, and large railway stations in both capitals.

The highway, which was built eight and a half years, has become the longest railway of its time. Already with 1846, its separate sections were put into operation. The “general rehearsal” before the grand opening was the dispatch of several trains with troops from St. Petersburg to Moscow. And the final commissioning was preceded by the journey of the royal train of nine cars, which left St. Petersburg at 4 in the morning on August 9 18 in 1851, and arrived in Moscow on the same day, after 19 hours. 1 November was opened a permanent movement.

In contrast to the Tsarskoye Selo road, domestic steam locomotives built at the St. Petersburg Aleksandrovsky Plant went along the line. The fare was free, and the number of passengers was growing rapidly: a year later the road transported 719 thousands of passengers plus 164 thousands of tons of cargo. The train reduced the time it took to go from one capital to another, to 12 hours. Later Melnikov became the first Minister of Railways of Russia, and his brainchild in the twentieth century turned into a part of the October Railway.

Despite the obvious popularity of the new type of transport, the rapid construction of railways in our country began only in the second half of the nineteenth century. The rapid industrial development launched in the last decades of the century gave it a particularly strong impetus, and at the beginning of the twentieth century in our country the highest growth rates of railway construction in the world were observed.